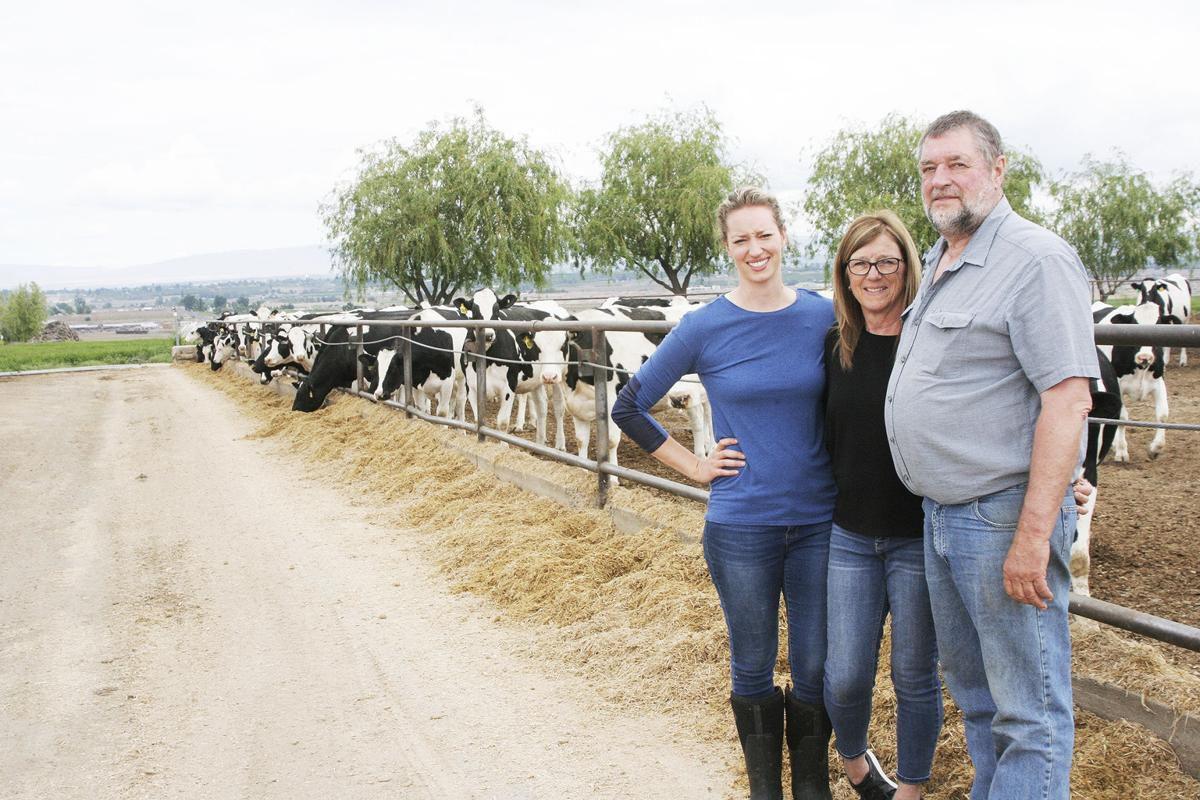 Kristyn Mensonides, left, with her parents, Thersa and Art Mensonides, at the family’s dairy in Mabton, Washington. The dairy reorganized its finances under Chapter 11 of the bankruptcy law. 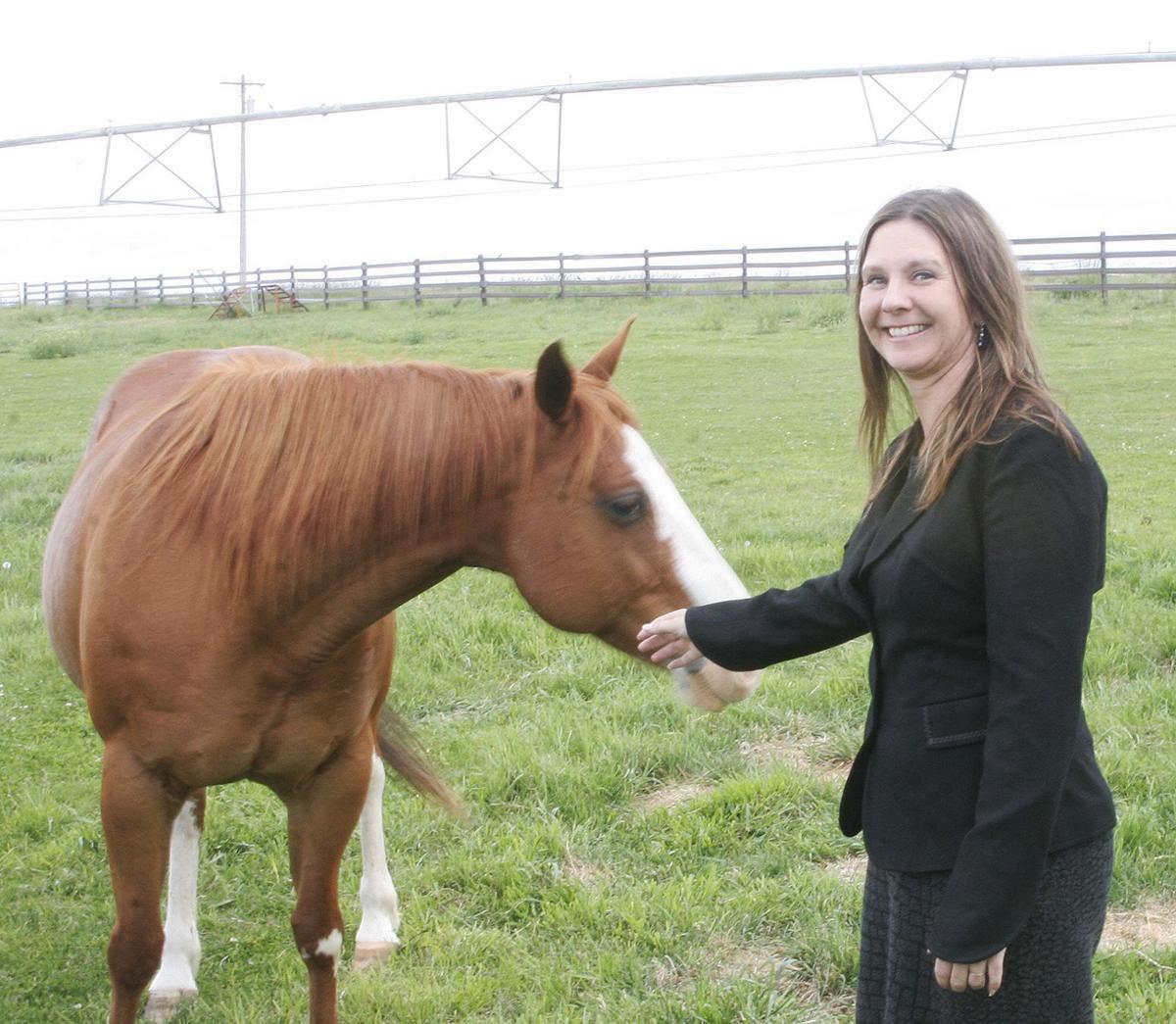 Toni Meacham, attorney, rancher and executive director of the Washington Agriculture Legal Foundation, is greeted by one of her horses on her farm near Connell, Washington.

Kristyn Mensonides, left, with her parents, Thersa and Art Mensonides, at the family’s dairy in Mabton, Washington. The dairy reorganized its finances under Chapter 11 of the bankruptcy law.

Toni Meacham, attorney, rancher and executive director of the Washington Agriculture Legal Foundation, is greeted by one of her horses on her farm near Connell, Washington.

MABTON, Wash. — The Mensonides family designed its dairy with “cow flow” in mind.

Cows enter the milking barn in one direction and exit a different way.

But at this dairy, it’s the farmers who are under stress.

The Mensonides family is among a growing number of family farmers who have sought protection under federal bankruptcy laws as the agricultural economy falters. In general, the laws allow them to prevent lenders and others from foreclosing on land or equipment while they develop a plan to repay their debts. In many cases, farms emerge on stable financial footing, experts say.

Art and Theresa Mensonides own the Mabton, Washington, dairy. Their daughter, Kristyn, manages accounts, and another daughter, Amy, works in the office. Three other daughters are not affiliated with the dairy.

The dairy filed for Chapter 11 bankruptcy protection in June 2018. The Mensonides family cited the years-long drop in milk prices and a loan for 70,000 tons of corn silage that wound up being unusable as feed. Their bankruptcy plan, under which they reorganized their finances, was approved in August 2019.

Their repayment plan was originally going to last 15 years, but it could be extended because of the effects of COVID-19 on the industry. This spring demand from restaurants for milk has evaporated, causing prices in some areas to drop into single digits per hundredweight, far below the cost of production.

Under the plan, the Mensonides family must meet certain criteria each month.

It’s the first time the family has filed for bankruptcy protection.

“We’ve had tough times, but we always could work it out,” Art said.

It’s not an easy situation for the family.

They get frustrated by delays in the process. Conversations with the bank are now done entirely through attorneys, which adds to the cost.

But they stick together.

“Keep hoping, keep praying, and keep your faith,” Theresa said. “Lord willing, we’ll get out. He has a plan for us.”

That hope, however, varies from moment to moment, Kristyn said.

‘Heartbreaking, alarming’A survey of court documents by the Capital Press found during the first quarter of 2020, 170 U.S. family farms filed for Chapter 12 bankruptcy protection, a part of the law designed specifically for family farmers.

The incidence of bankruptcies is low, approximately 3 per 10,000 farms, but the trend is concerning, according to the Farm Bureau’s national president, Zippy Duvall.

“Each bankruptcy represents a farm in America struggling to survive or going under, which is both heartbreaking and alarming,” Duvall said in a press release. “Even more concerning, the difficulty staying afloat is made worse by the pandemic and related shutdowns as farmers are left with fewer markets for their products and lower prices for the products they do sell.”

The tumultuous trade picture was only made more concerning when the coronavirus shutdowns came along, experts say. Most U.S. farmers depend heavily on trade with Asia and other parts of the world.

“Without doubt financial stress is increasing and a concern but the key factor is we need to recover fully our international trade,” said Shannon Neibergs, Washington State University Extension economist. “And move forward with economic recovery.”

Understanding riskA producer files for bankruptcy protection to protect the farm only after the bank has initiated foreclosure, Neibergs said.

Farmers have several options, according to the Administrative Office of the U.S. Courts:

• Chapter 7: This provides a “fresh start” for debtors. It releases individual debtors from personal liability for most debts and divides available collateral among lenders and other creditors.

• Chapter 11: This provision is typically used to reorganize a business, which may be a corporation, sole proprietorship or partnership. Many farms are similarly organized.

• Chapter 12: Designed for “family farmers” or “family fishermen” with regular annual income to propose and carry out a plan to repay all or part of their debts.

• Chapter 13: The “wage earner’s plan” allows individuals with regular income to develop a plan to repay all or part of their debts.

If appropriate, Chapter 12 is “significantly advantageous” for farmers, Neibergs said.

“They’ll get the most lenient treatment to reorganize” based on the farm’s cash flow, he said.

The farm often survives, he said.

Filing typically occurs when a farmer becomes delinquent on loan payments, and communication efforts with the lender fail, Neibergs said. The farmer files to protect collateral from being seized.

“They think they know it in their head, but they might be surprised if they actually put the pencil to it and use the strict accounting rules (that) farm management ag economists recommend,” he said. “It might not be as rosy as they think when it’s really put down on paper.”

Crider said farmers should maintain open lines of communication with banks, providing full financial disclosure to allow the lender and borrower to consider all possible solutions.

Changes to the current business may be required to return to financial viability, he said.

“Status quo may not get you there,” he said.

The bank offers “streamlined” financing paths, such as disaster assistance loans and payment deferrals, to help customers caught up in the COVID-19 pandemic.

“We desire to demonstrate as much flexibility as we possibly can,” Crider said. “It’s in the bank’s best interest to help customers through financial difficulty.”

Now, more than ever, banks should take a “Yes, we can do this” approach, when working with customers, Crider said.

The goal, he said, is “if at all possible, return the business to viability.”

Build a ‘war chest’Bankruptcy cases used to be 10% of Toni Meacham’s job as an attorney. In the past few years, they have risen to half of her caseload.

Meacham is an attorney and rancher in Connell, Washington. She is also executive director of the Washington State Agriculture Legal Foundation.

Restructuring under Chapter 11 or 12 allows farmers to “fight another day,” but Meacham says they also need a “war chest” of cash collateral to be approved.

“That means you don’t have to get money from a bank, you have enough money built up that you can continue to operate — bare bones operation, but operation nonetheless,” she said. “You can’t restructure if you don’t have the funds to do it.”

How big that war chest should be depends on the type of farm and its budget, she said.

“It seems like an oxymoron that a bankrupt person’s got to have cash to file bankruptcy, but you do,” she said.

Brian Newhouse, an accountant in Prosser, Washington, recommends farmers work with experienced professionals as they navigate the process.

“A lot of the stress comes from the unknown and the uncertainty,” he said.

Success might mean negotiating to liquidate the farm to pay off the bank or creditors. Or it could mean allowing the farm enough time to change things and pay creditors as they continue to work, he said.

Newhouse expects more bankruptcies, or more family farms deciding to get out and sell, in the years ahead.

“It doesn’t always end as, ‘We get to keep the farm,’” Newhouse said. “Sometimes it’s, ‘We get to exit the farm appropriately.’”

Reach out to a farmerAs she drives around her family’s dairy, Kristyn Mensonides has advice for friends and loved ones of farmers who have filed for bankruptcy protection: It’s OK to talk about it.

The dairy will continue, the Mensonides family members say.

Art says he would work with a different bank when the economy allows, adding that right now it’s hard for anyone to find a lender. He advises farmers to be careful and use their head.

“It’s not an easy situation,” Kristyn said. “You have to be emotionally strong and be able to endure that kind of stress.”

“If you cannot do that, then don’t go into bankruptcy,” Art said.