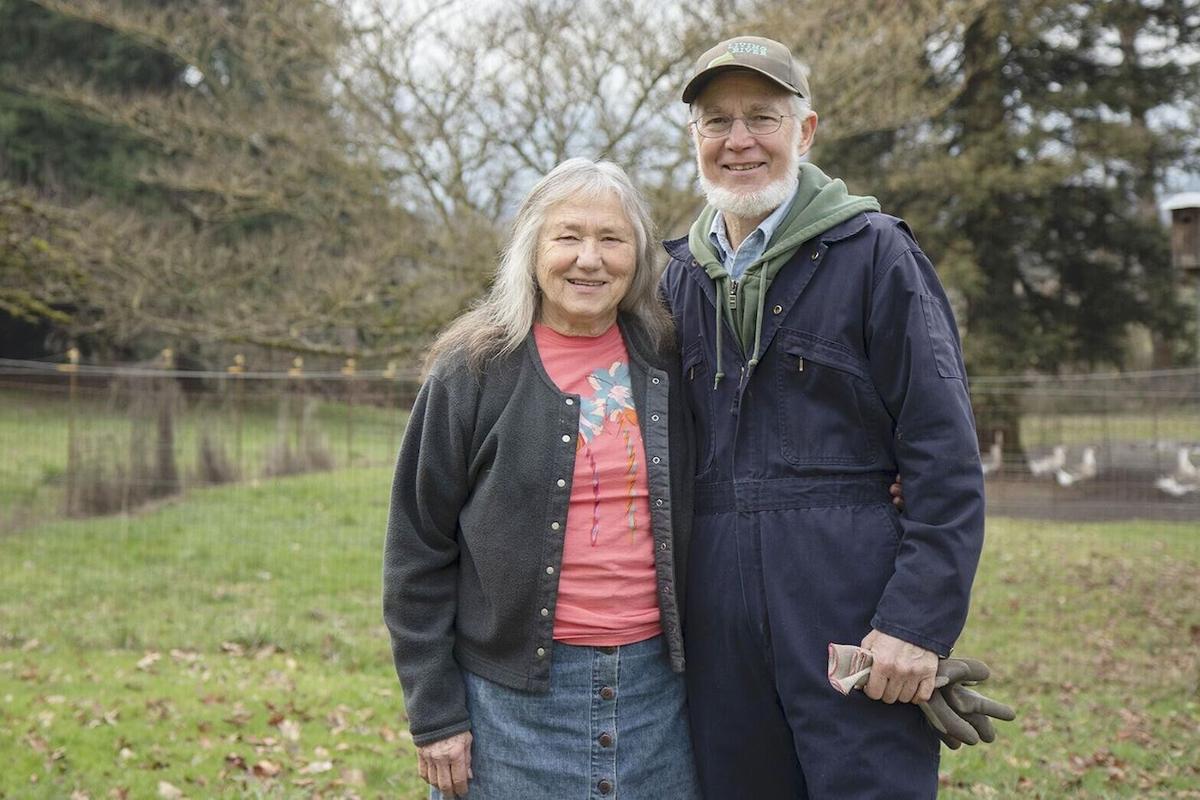 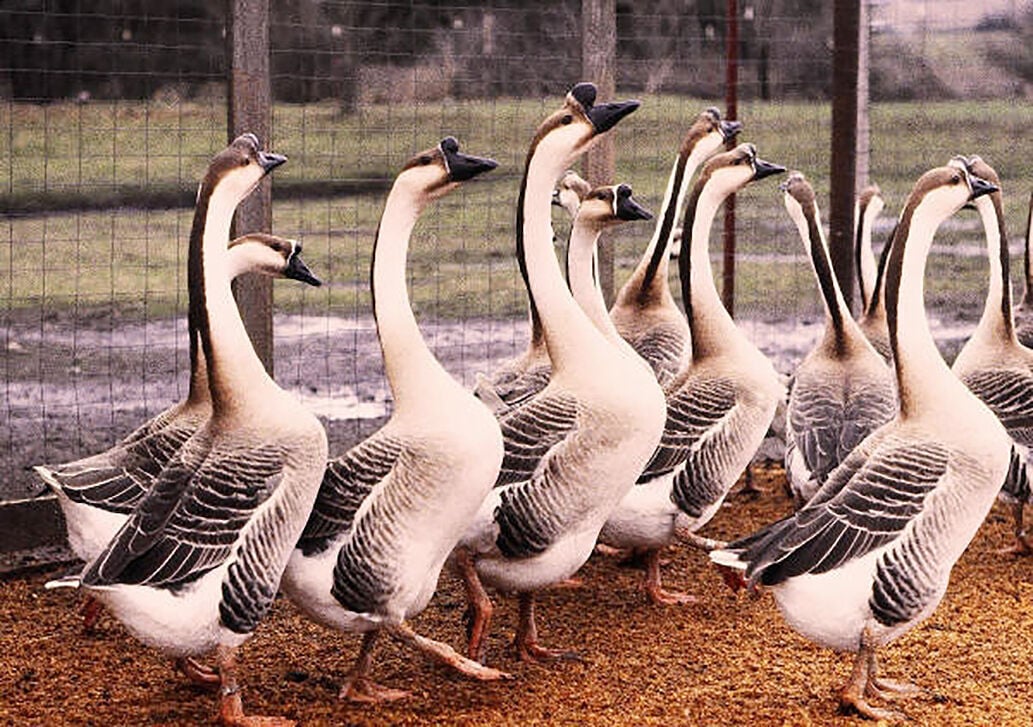 Brown Chinese geese in this undated photo strut on the Holderread Waterfowl and Preservation Center, Philomath. 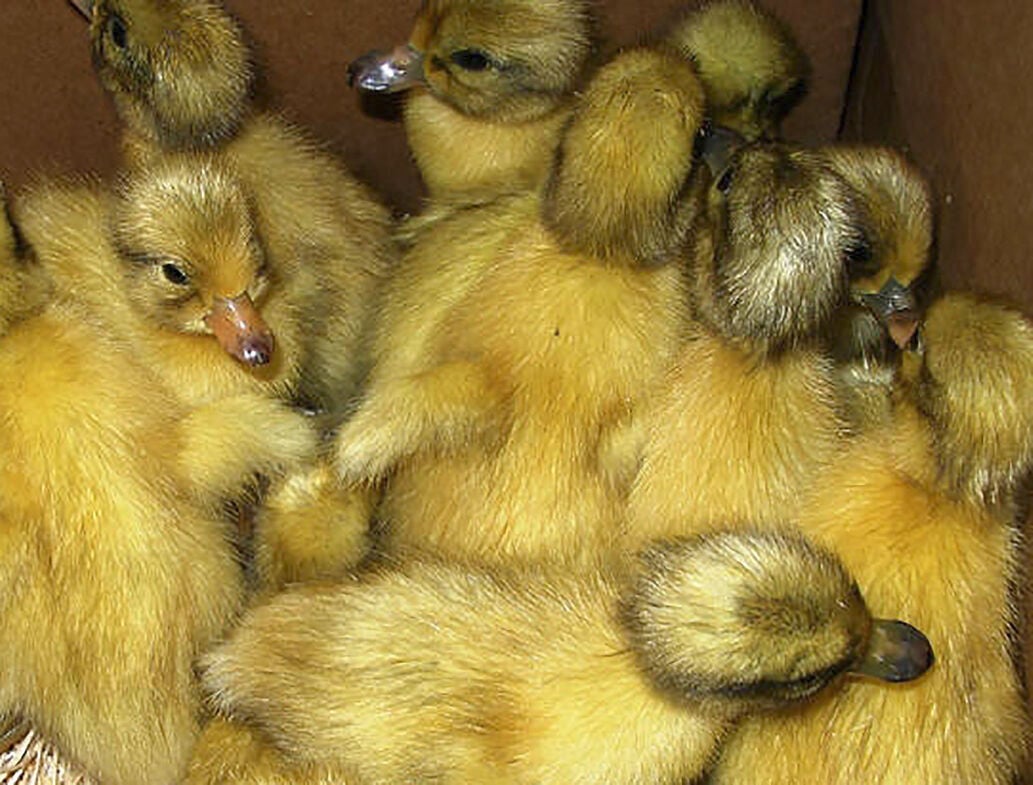 Mini Silver Appleyard ducklings huddle together in this undated photo on the Holderread Waterfowl and Preservation Center, Philomath. 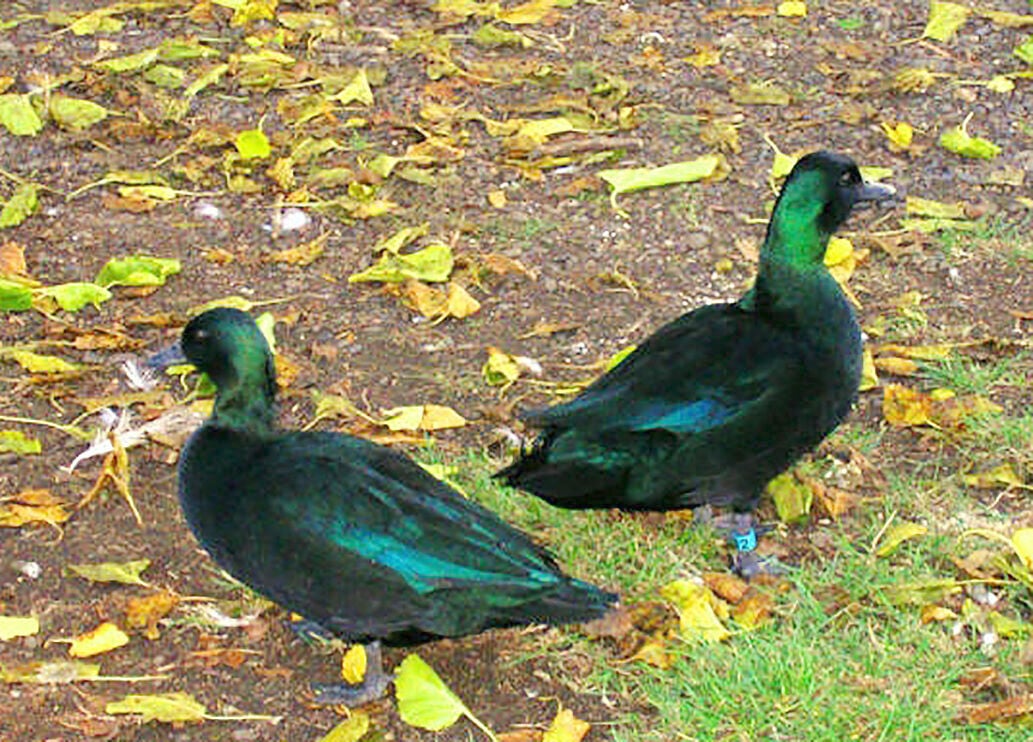 A pair of black East Indie ducks waddle about in this undated photo on the Holderread Waterfowl and Preservation Center, Philomath. 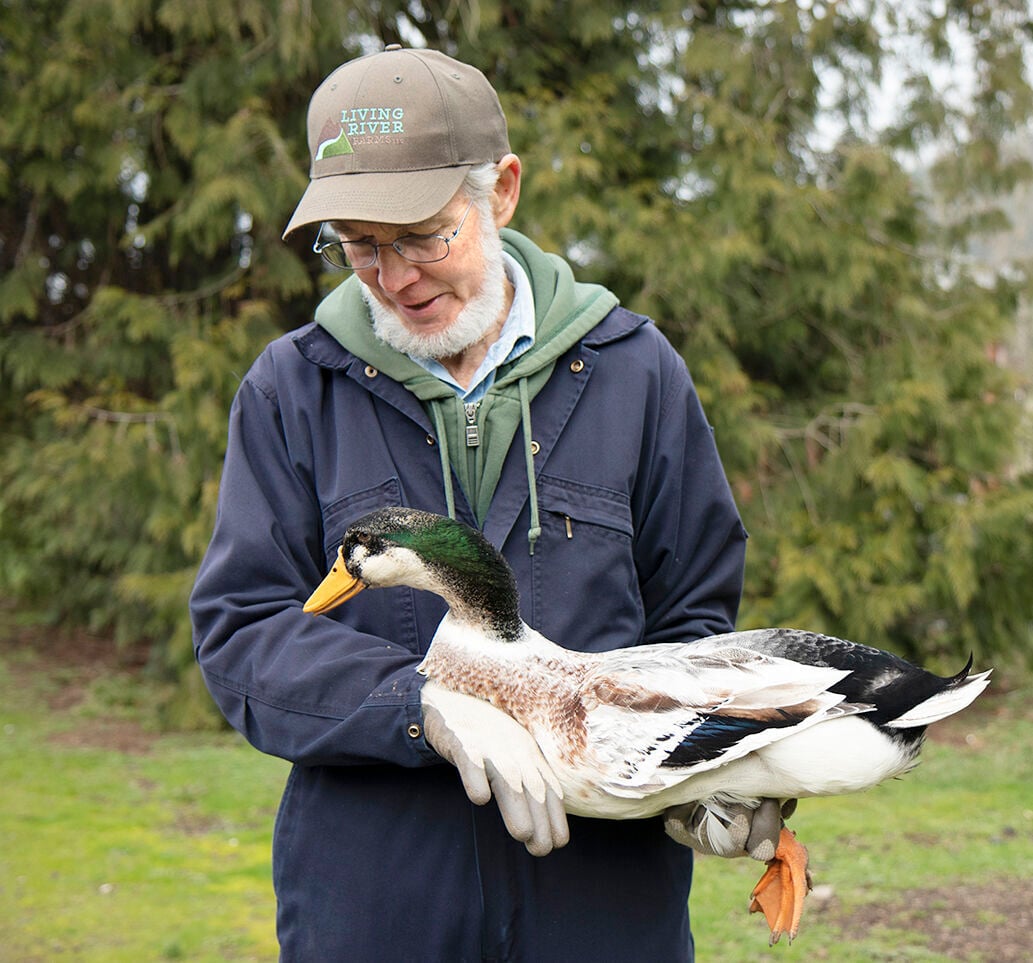 Dave Holderread in this undated photo holds a Silver Appleyard duck. Holderread, a world-leading breeder of waterfowl on his operation in Central Oregon, recently retired.

PHILOMATH — When Dave Holderread, one of the world’s leading waterfowl breeders, announced in 2019 he would retire in 2020, it shook the poultry and waterfowl communities.

“I’m still trying to absorb the news of his retirement,” said Jeannette Beranger, senior program manager for the Livestock Conservancy.

There are few waterfowl breeders of his caliber and knowledge in the world, Beranger said.

Holderread, 68, has bred and raised waterfowl for six decades in a lifelong game of duck, duck, goose. In Philomath, between Mary’s Peak to the west and snow-mantled Mount Jefferson to the east, Holderread and his wife, Millie, raised more than 20 heritage goose varieties and 40 heritage duck varieties they shipped to hatcheries and homesteads nationwide.

During his career, Holderread developed a new duck breed and improved existing breeds. He taught people around the world about the benefits of raising waterfowl for pest and weed control, eggs, meat, down, as protection against predators and for companionship.

Holderread said as his body has slowed down, it’s gotten harder to catch and handle birds, and the workload is no longer manageable. It’s time to move on.

His glance strayed leftward, where his remaining geese grazed on pasture and ducks rooted under leaves.

“It’s been an adventure.”

A love for animals

Holderread was born in Twin Falls, Idaho. His dad was a high school agriculture teacher, and Holderread’s earliest memories are of tagging along to see students’ FFA projects. Animals captivated him.

“I was fascinated by anything that moved,” he said.

He said he remembers, from an early age, seeing ducks and geese as the animals that could do it all: walk, swim, fly. Whenever Holderread disappeared at parks, his parents looked for the nearest body of water, where they’d find him at the shore watching ducks and geese splashing.

When Holderread was 3, his parents whisked him away to Puerto Rico, where his dad got a job managing the first modern dairy operation on the island.

“What’s better for a kid that loves animals?” he said.

Holderread’s mom was a nurse, and within three years, she helped deliver about 100 babies. Holderread recalled she would often ride off on a horse into the jungle to help with deliveries.

“She was short and sweet, but nobody messed with her,” Holderread said.

He stroked his beard and smiled.

With his parents working, Holderread said he had “free run” of mountains, meadows and jungles he explored with his collie puppy.

When Holderread was 7, his family moved back to Idaho.

The transition was bumpy; he got kicked out of second grade for talking back to his teacher in Spanish.

A year later, the family moved again, to Corvallis. His dad, who had injured his back and could no longer do agricultural labor, took a job as a Spanish teacher. Holderread soon had three sisters, and his family owned a small farm.

His teacher brought two yellow Pekin ducklings to school and told the students whoever wrote the best essay about ducks could take them home.

“I have a hard time believing I really wrote the best paper. I think she just knew how much I wanted them,” he said.

With the encouragement and help of his parents, Holderread expanded his flock.

Around age 8, he got his first clients: Jenks Hatchery Inc. in Talent and a local general store both offered to pay him for hatching eggs.

By age 9, Holderread hungered to know more about genetics.

His dad took him to livestock fairs and got him books on poultry.

Through his readings, Holderread learned that studying pigeons is one of the best ways to learn about genetics. Many geneticists, including Charles Darwin, raised pigeons, widely considered a “model organism” for understanding genetic variations.

Holderread subscribed to three pigeon magazines, which he read cover to cover. Even after his parents said “lights out” at night, he secretly read the magazines by flashlight.

As a teen, Holderread continued studying genetics and raising birds.

In high school, he got into racing pigeons and using pigeons to send messages.

Historical records show pigeons, which have a strong “homing” instinct and can therefore carry messages home, have been used in communication systems for millennia.

Back to Puerto Rico

Then the Vietnam War disrupted his plans.

Holderread, a Mennonite, applied as a conscientious objector and was sent to do development work as alternative service in Puerto Rico.

He took leave of OSU in 1972. On the island, he served as a vocational poultry instructor and director of a research and breeding center.

In a cut-out of dense jungle on the side of a hill, he raised more than 100 varieties of water and land fowl — ducks, geese, chickens, turkeys, pheasants, guinea fowl, quail and pigeons.

“Ducks and geese performed by far the best,” he said. “That’s what solidified my path.”

He taught people about feed conversion, small-scale poultry management, incubation, how to handle diseases and run a business.

His required term of service was two years, but Holderread stayed four.

And that’s where he met Millie.

Millie Miller, originally from Delaware, was in Puerto Rico serving with the Mennonite Voluntary Service Program.

Holderread and Miller were an unlikely couple; he was already engaged to someone in the states, and Miller had promised herself long ago she would never marry a farmer.

But Holderread’s engagement broke off when he and his fiancée realized they didn’t share the same vision for life, and Miller gradually softened to the idea of farm life.

The two fell in love.

“As you can see, he changed my mind,” Millie said.

She leaned against him and laughed.

The two married in Delaware and then moved to Corvallis to build the waterfowl business.

The couple lived with Dave’s parents while they looked for land.

Knowing that they’d make multiple trips to a post office daily during shipping season, they searched for land near one.

At last, they found a parcel in Philomath about 2 miles from the post office.

“My dad was like, ‘No, you don’t want this place.’ But we knew we’d never find another place this close to the post office. So we took it,” he said.

They burned and bulldozed for months.

“Let me tell you, there is no smell as bad as mink urine-soaked wood burning,” Holderread said.

Today on the farm, green pastures grow thick and lush and more than 50 types of fruit, nut, shade, timber and decorative trees adorn the property.

Ducks in a row

But word about Holderread spread. Soon, commercial farms and homesteads across the nation and world began ordering hatchlings.

Major hatcheries, including Hoover’s Hatchery in Iowa and Metzer Hatchery in California, also bought from the Holderreads.

One of Holderread’s greatest contributions, some experts say, was in educating people about the benefits of “underutilized” and “underappreciated” waterfowl.

Geese also can serve as sentinels, scaring away hawks and small predators. The birds have been acclaimed as “watchdogs” as early as 309 B.C., when they were credited with saving Rome from an attempted sneak attack by the Gauls.

Holderread, who also raises horses, said geese are similar to horses: powerful, intelligent beasts that must trust and respect you in equal amounts.

“I also enjoy their chatter — and their grace,” he said.

Ducks, too, are efficient meat, egg and down producers, are hardy and require minimal shelter.

The Holderreads have produced what many experts consider the best books in the world about ducks and geese. Dave wrote them; Millie illustrated them.

“I would say that they’ve touched thousands and thousands of people with their books,” said John Metzer, owner of the California hatchery.

Holderread has focused his career on preserving rare and endangered breeds. Without his efforts, experts say several species would likely have gone extinct.

At its peak, his farm was full of color and life, including chubby-cheeked Call Ducks, emerald green East Indies and tall Indian Runners that walk upright like humans.

He even invented a new breed of duck, which Millie named the Golden Cascade.

The Holderreads, friends said, have been generous with their knowledge.

Millie said Dave gets letters and emails from around the world and has spent countless hours on the phone answering people’s questions.

On one occasion, a 14-year-old boy from Australia who had read Holderread’s books stayed a week with the couple when visiting the U.S.

“He was brilliant. He had memorized the genotypes for every color and he would quiz me,” Holderread said, and laughed.

The boy wanted to breed a color of duck that didn’t exist in Australia. He and Holderread stayed up until midnight diagramming how to make the color.

“When he went home, he tried it. He sent us pictures of the crosses. And in two years, he did it,” Holderread said.

Through the years, Dave and Millie welcomed five college students to live with them and learn about agriculture.

One young man, Beau McLean, grew up on a cattle ranch in Montana. At age 10, he found a used copy of one of Holderread’s books at a garage sale, which furthered his desire to raise poultry. When preparing to attend OSU a decade later, he met, then lived, with the Holderreads.

“They became like second parents to me,” he said.

Phillip Landis, a sheep rancher in Albany, also lived with the couple during college.

Landis said he learned how to be frugal, wise and a keen observer of animals. He also learned about hospitality and putting others first.

“We thought we’d have kids, but they never showed up. But we like to say they showed up as young adults,” he said.

When Holderread began planning for retirement, he strategically spread out his bird genetics.

“We still need more champions of waterfowl, but Dave went above and beyond to place the genetics with people who want to carry on the legacy,” said Beranger.

Davis, owner of the waterfowl preservation farm in Canada, bought many of Holderread’s birds.

“I have a chance in history to preserve something beautiful that would otherwise be lost,” he said.

Today, the Holderreads continue to raise horses and keep a small flock of geese and ducks.

“I can say one thing about life,” Holderread said, grinning. “It’s been interesting.”