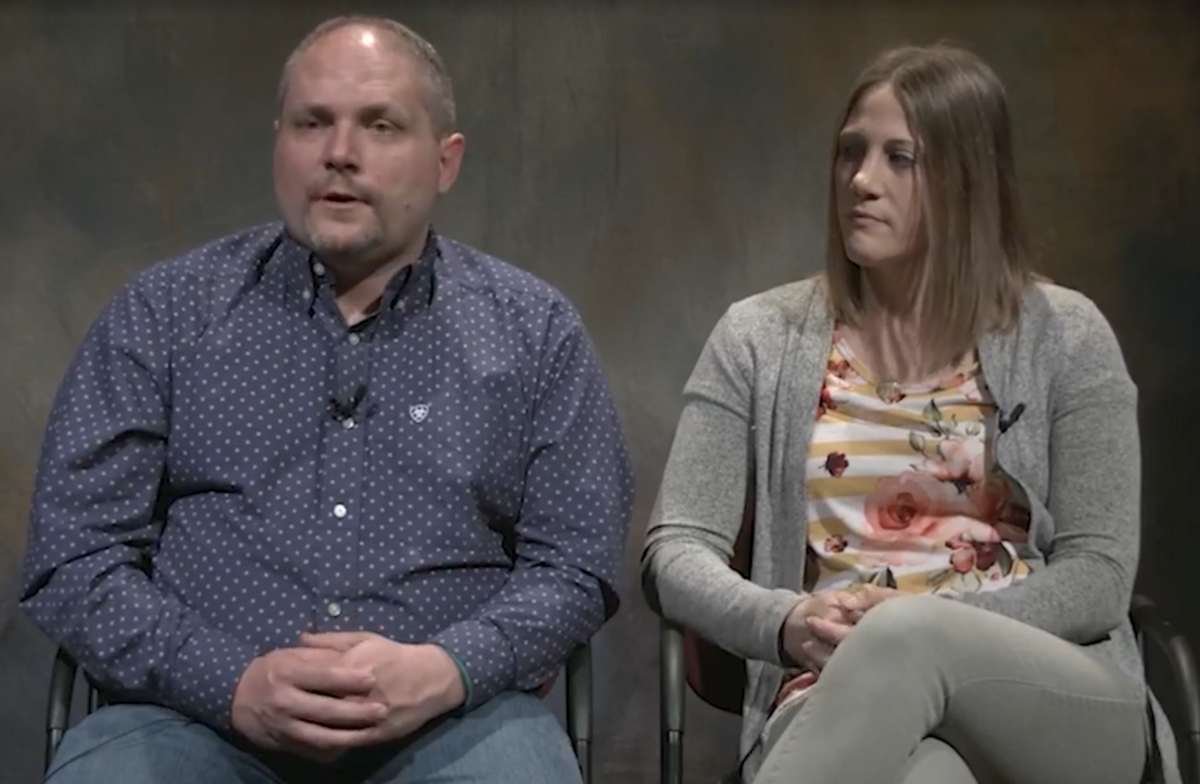 Matt and Kylee Goodwin in this image from a Grande Ronde Hospital Foundation video tell how the loss of their baby Andrew in March 2020 led to their efforts to fundraise for a cuddle cot for Grande Ronde Hospital, La Grande. The cot allows grieving family members to stay longer with babies who die. 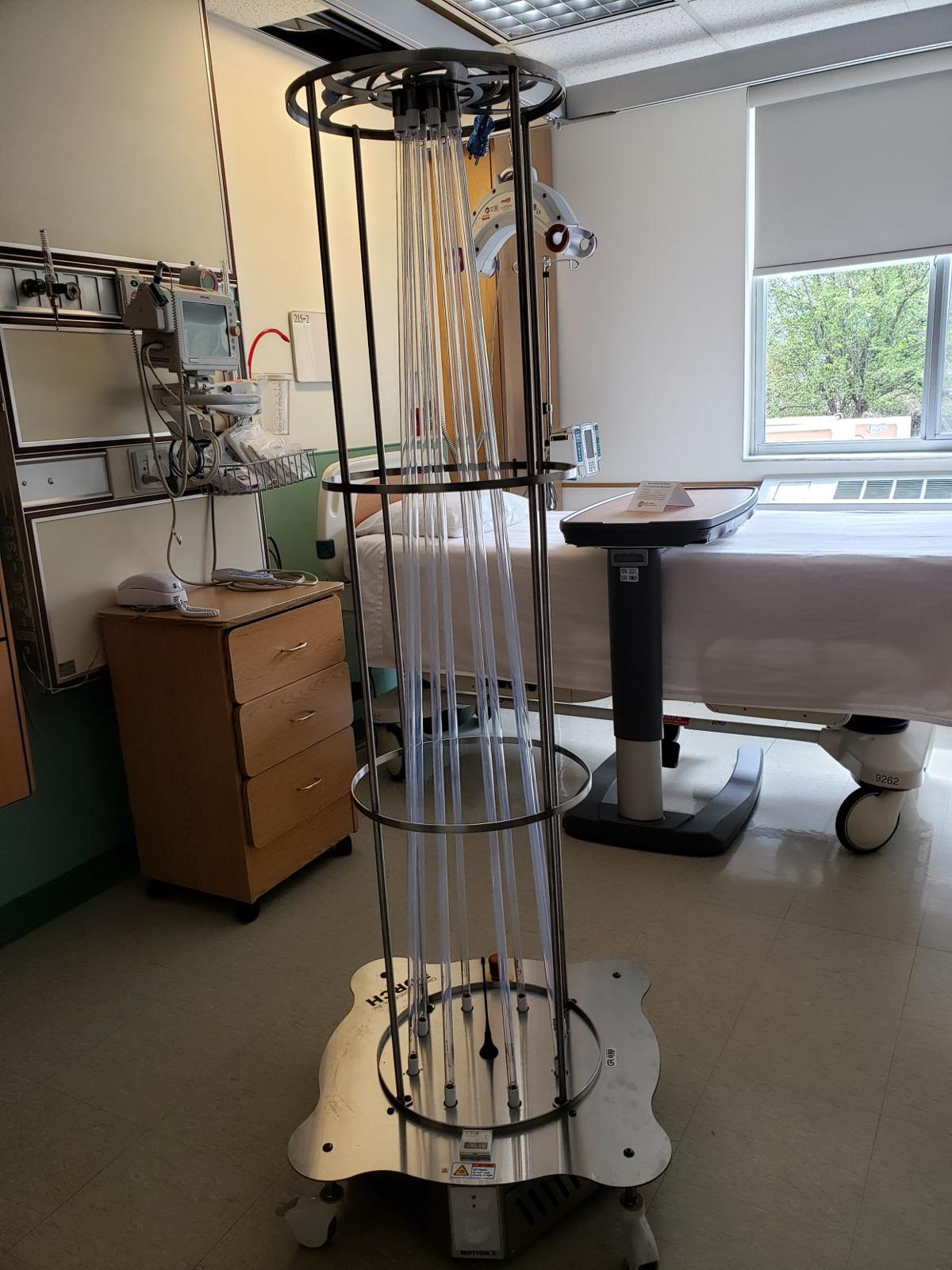 The 6-foot tall “Torch” uses ultraviolet light to disinfect rooms in 15 minutes. Grande Ronde Hospital, La Grande, has been using several during the pandemic, and the hospital's foundation is providing two more of the devices, which cost about $55,000 each.

Matt and Kylee Goodwin in this image from a Grande Ronde Hospital Foundation video tell how the loss of their baby Andrew in March 2020 led to their efforts to fundraise for a cuddle cot for Grande Ronde Hospital, La Grande. The cot allows grieving family members to stay longer with babies who die.

The 6-foot tall “Torch” uses ultraviolet light to disinfect rooms in 15 minutes. Grande Ronde Hospital, La Grande, has been using several during the pandemic, and the hospital's foundation is providing two more of the devices, which cost about $55,000 each.

LA GRANDE — The Grande Ronde Hospital Foundation wrapped up its fundraising year in April with a livestream event that showcased the organization’s efforts and brought in about $6,000.

Foundation Manager Patrick Flynn said the online happening on the evening of April 16 went better than he had hoped, and the 80-minute video has drawn at least 1,100 views, so the Foundation’s message continues to get out. Going to a livestream event, he said, was due to COVID-19.

“As with everyone this last year, COVID kind of blew everything up. We normally have our gala in mid- to late March and that event is our largest fundraiser,” Flynn said.

But two days before the gala in 2020, Gov. Kate Brown ordered the first shutdown of Oregon.

“We were about to head out to decorate the venue,” he said, “and we got the notice.”

The outbreak at that time was small in Oregon with most cases in the Portland area.

“We just didn’t anticipate it being a statewide shutdown,” he said.

Neither did other organizations or events throughout Oregon. And after a year, he said, the foundation realized it was not going to be able to have a live gala in 2021, either. Some brainstorming led to a couple of ideas.

One was to livestream a gala. He said organizations taking that road have met with different degrees of success, but he ultimately did not see it as viable for capturing what the gala was about. The foundation during the summer also holds a rooftop social, where it invites donors and community VIPs and provides food, drink and live entertainment and gives a rundown of what the foundation is doing.

The foundation opted to mesh the two for a livestream event. But the backbone of the presentation came from a suggestion of a new board member.

Grande Ronde Hospital Foundation has for years worked with Brent Clapp Productions, La Grande, to produce videos of the hospital’s patients telling their stories of how care, treatment and even survival because of the work of the foundation and hospital.

Flynn said the board member suggested the foundation needed to share more of the compelling videos. They proved a fine fit for the online event.

One of the videos featured Kim Hulse, a native of Pendleton who relocated to La Grande in 1985. She went in for a mammogram in 2017, and the hospital’s then new 3D mammography machine, which the foundation provided, detected an early cancer.

According to the hospital’s mammography manager, Flynn said, traditional tech would not have found the cancer for another three years.

“So now, four years later, she lives cancer-free with her partner in Arizona,” he said.

The capstone video of the event was the most emotional, telling the story of Matt and Kylee Goodwin, who were pregnant with their fourth child, Andrew, whose heart seemed to have some issues. In March 2020, in Kylee’s seventh month of pregnancy, the unborn infant’s heartbeat was elevated.

An emergency flight took Kylee to a hospital in Boise. After treatment, she ended up delivering Andrew there, and he was stillborn.

Under most circumstances, Flynn said, a hospital might let a family stay a few hours with the baby. But this hospital had a cuddle cot, a cooling unit that functions inside a bassinet. The device allows family members to spend longer time with the body.

“Just to be able to say goodbye in their time and on their own terms,” Flynn said.

The Goodwins were able to stay with Andrew overnight. Flynn said they found the experience so beneficial they decided to fundraise on their own to get a cuddle cot for Grande Ronde Hospital.

Flynn said the foundation threw its weight behind this to get the best deal it could on the equipment. The project led to a memorial fund in Andrew’s name that also provides photography services for families who want it.

“That’s why we’re here,” he said. “We want to provide a greater service to the people here.”

To that end, the foundation is working on adding two more Torches to Grande Ronde Hospital.

The devices are 6 feet tall and use ultraviolet light to disinfect surfaces in 15 minutes. The hospital has eight as of 2020, including tabletop torches that cover smaller areas. Each torch costs approximately $55,000. Flynn said they are worth the investment.

“Those things have been invaluable over the last year,” he said, cutting down on thousands of work hours of cleaning. And they have contributed to preventing the spread of COVID-19.

Grande Ronde Hospital Foundation also has upgrades coming for the hospital’s intensive care unit. The ICU rooms have a whiteboard for doctors and nurses to write on. While convenient, whiteboards also tend to get messy with use.

“We’re going to replace all the boards in the ICU with snazzy new glass boards,” he said, which are more usable and more readable.

The foundation is also funding the move to bring on a more convenient and secure text messaging system for patients to use to communicate with providers. He said the hospital will have more information on that front soon, as well as an outdoor event in June that could involve a drive-in movie.