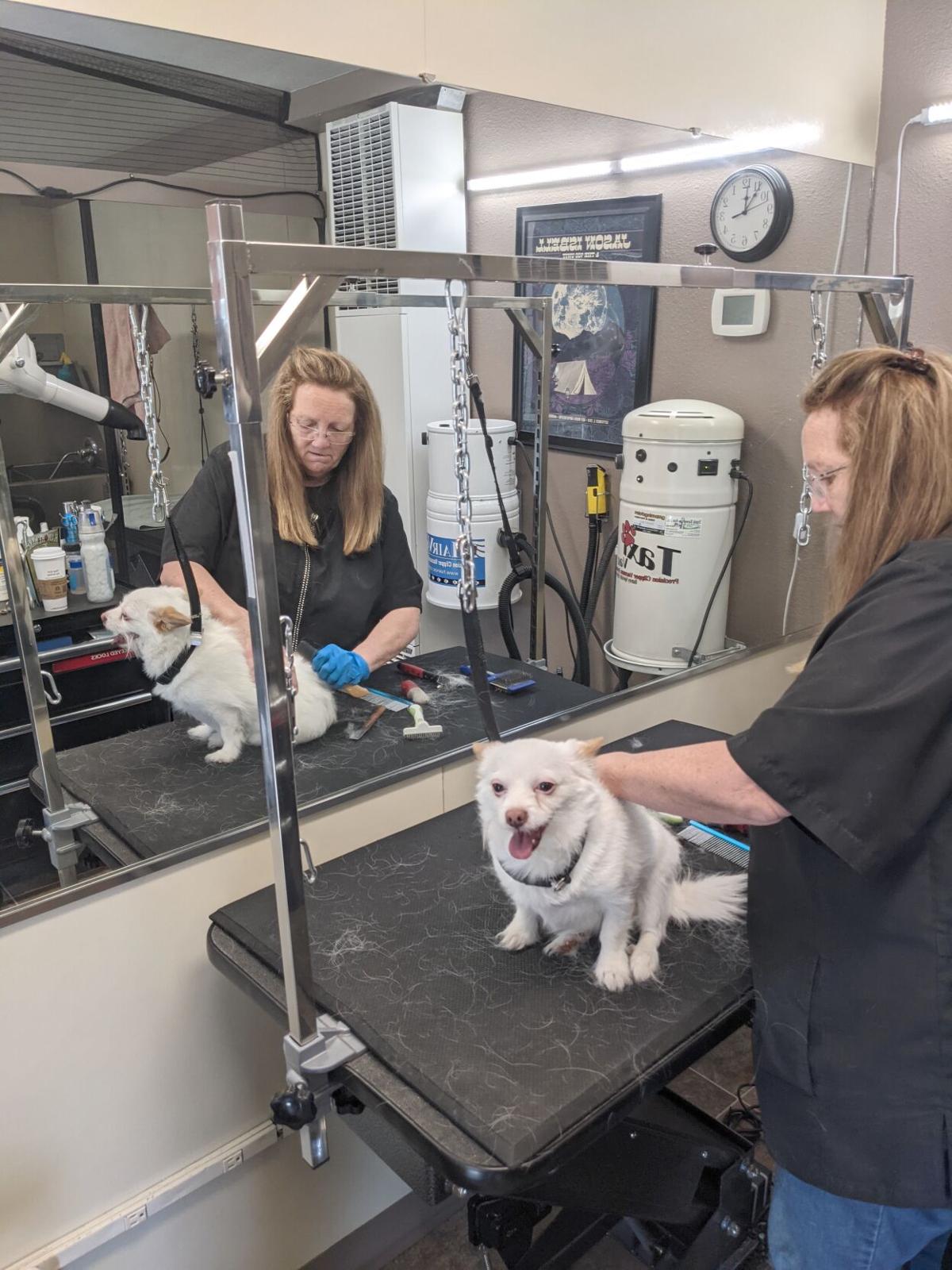 Debbi Larson grooms Cecil on Tuesday, March 30, 2021, at her La Grande business Best of Breed. She estimated her business has increased 30% since the start of the pandemic. 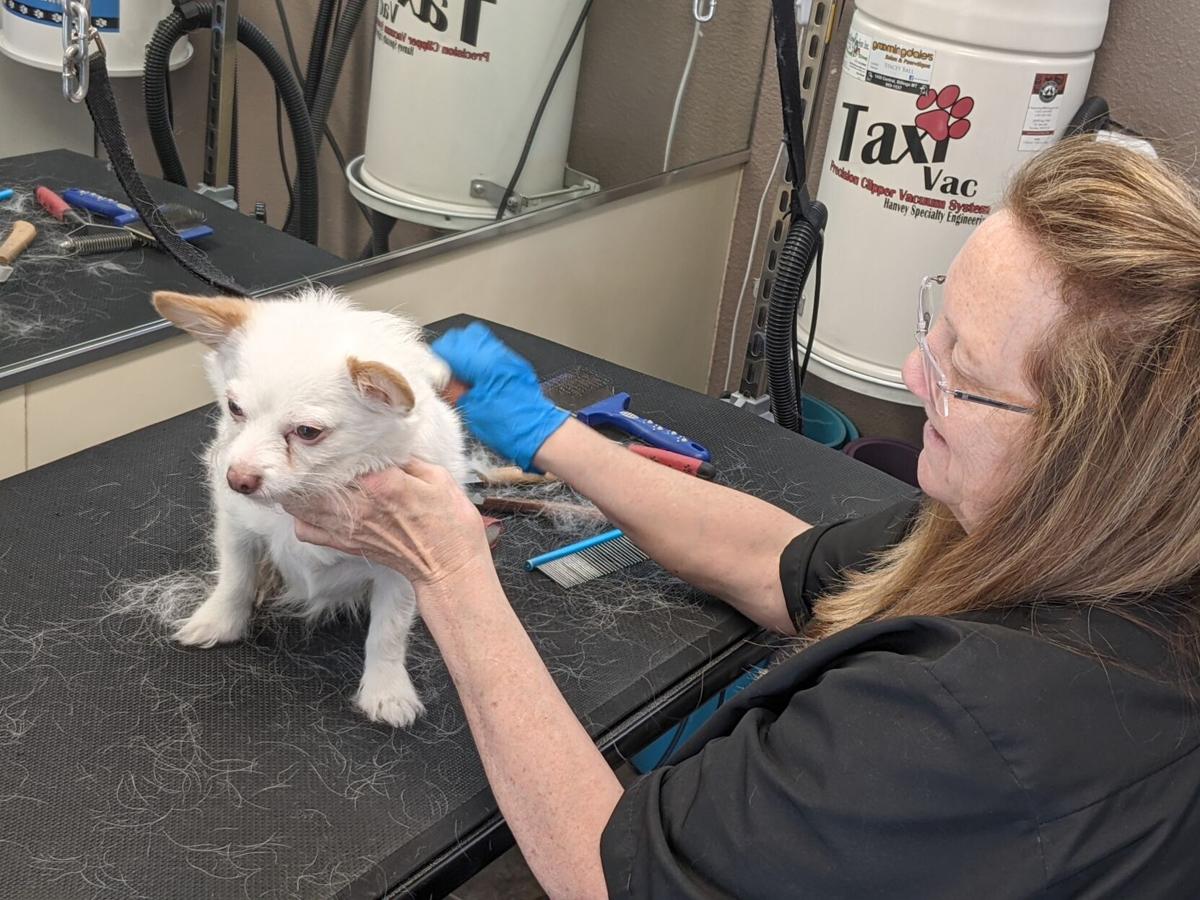 Cecil stays still as Debbi Larson grooms him Tuesday, March 30, 2021, at her La Grande business Best of Breed. She is no longer taking new clients because her business has been so busy during the pandemic.

Debbi Larson grooms Cecil on Tuesday, March 30, 2021, at her La Grande business Best of Breed. She estimated her business has increased 30% since the start of the pandemic.

Cecil stays still as Debbi Larson grooms him Tuesday, March 30, 2021, at her La Grande business Best of Breed. She is no longer taking new clients because her business has been so busy during the pandemic.

LA GRANDE — The latest round of personal stimulus money may not be making its way into local businesses.

Most people nationwide are using the latest round of stimulus payments to cover the costs of food, utilities and household supplies, according to the U.S. Census Bureau’s Household Pulse Survey. Paying down debt and paying for housing and vehicles also are among the top ways the survey indicates people are using the funds.

Spending on household items, such as TVs and furniture, giving to charity or family and purchasing recreational goods are at the bottom of the list.

But some La Grande business owners said there is more to the stimulus spending picture.

Shaun Daggett and his father, Mike Daggett, own and run Northwest Furniture & Mattress. Shaun Daggett said their big issue is not a lack of customers looking to spend stimulus money.

“If we had inventory, I’m sure that would help us,” he said.

The pandemic has led to a slowdown in production. Trying to maintain social distancing in manufacturing, he said, means furniture makers are not producing as much. The La Grande store usually has 36 sets of living room furniture, he said, but Tuesday, March 30, there were only four.

Other factors are compounding the inventory shortage.

Nearly 50 ships carrying goods for stores across the United States are stuck in Southern California. A spike in coronavirus cases among dockworkers there is creating a bottleneck of goods as more ships come in while goods are going out at a trickle. Add to this, Daggett said, the massive container ship that blocked marine traffic through the Suez Canal for nearly a week. All of that means delays in getting goods to people.

Just the other day, he said, customers came in looking to buy a sofa. But if they want something not on the floor, that means ordering and waiting seven or eight months.

“So we’re waiting until October, November of this year,” he said.

Still, Daggett said, business is not taking a downturn.

“We’re definitely doing OK,” he said, “but I think if we could get product, we would be doing phenomenal.”

Maria Vazquez said she has noticed a slight increase in sales the last couple of weeks at her pizza and sandwich shop, New York Richie’s. Rather than a surge, she said, it seems more like a steady climb. And while business remains slow overall, sales are good.

She also said the stimulus payments are a boon to the families who needed it to keep their homes and pay for essentials, such as clothing.

Debbi Larson said she cannot tell if stimulus money is making a difference for her business, Best of Breed, which provides pet supplies, food and grooming, but the pandemic sure has.

“My business has increased probably 30% since the pandemic started,” she said.

She attributed the uptick to a few situations.

More people have sought pets during the pandemic. Dog ownership nationwide jumped, she said, as people bought “pandemic puppies.” And people are spending more time with their pets, so grooming services have increased.

“I groom two days a week,” she said, “and my service is booked through the end of the year.”

She said she had to stop taking new clients. Another groomer who uses the space at the shop three days a week, Larson said, has appointments for the next seven weeks.

Whit Hartz at his business Mountain Works Bicycles doubted he has seen a surge, but then again, it could be hard to tell. Mountain Works, he said, has been “unprecedentedly busy.”

The pandemic forced gym goers and exercise enthusiasts to seek out new ways to work out, and that meant going outdoors. Ski and bicycle shops, Hartz said, have stayed busy during the pandemic.

While the business has not noticed an uptick in local spending from stimulus payments, he also said spring is just starting in the Grande Ronde Valley and even more business could come with the change in weather.

As COVID-19 cases continue to trend down, Hartz and some of the other local business owners said they see some light at the end of the coronavirus tunnel and a greater return to normalcy.

“I think people are ready to be people again,” Hartz said. “I hope.”