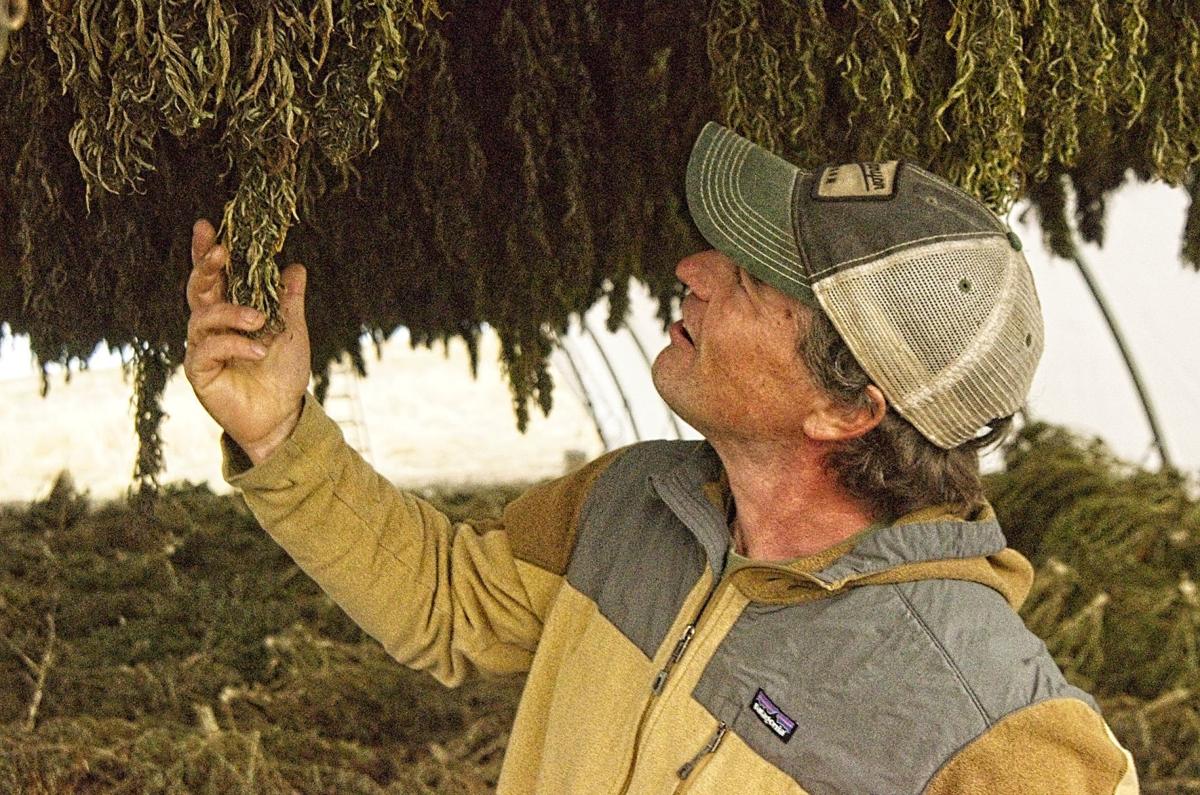 Hemp farmer Shane Kimball, of Joseph, examines drying hemp buds in a Quonset hut at his farm east of Joseph. He says to look at them, you can’t tell hemp from marijuana; it’s only with a chemical test that the difference can be determined. 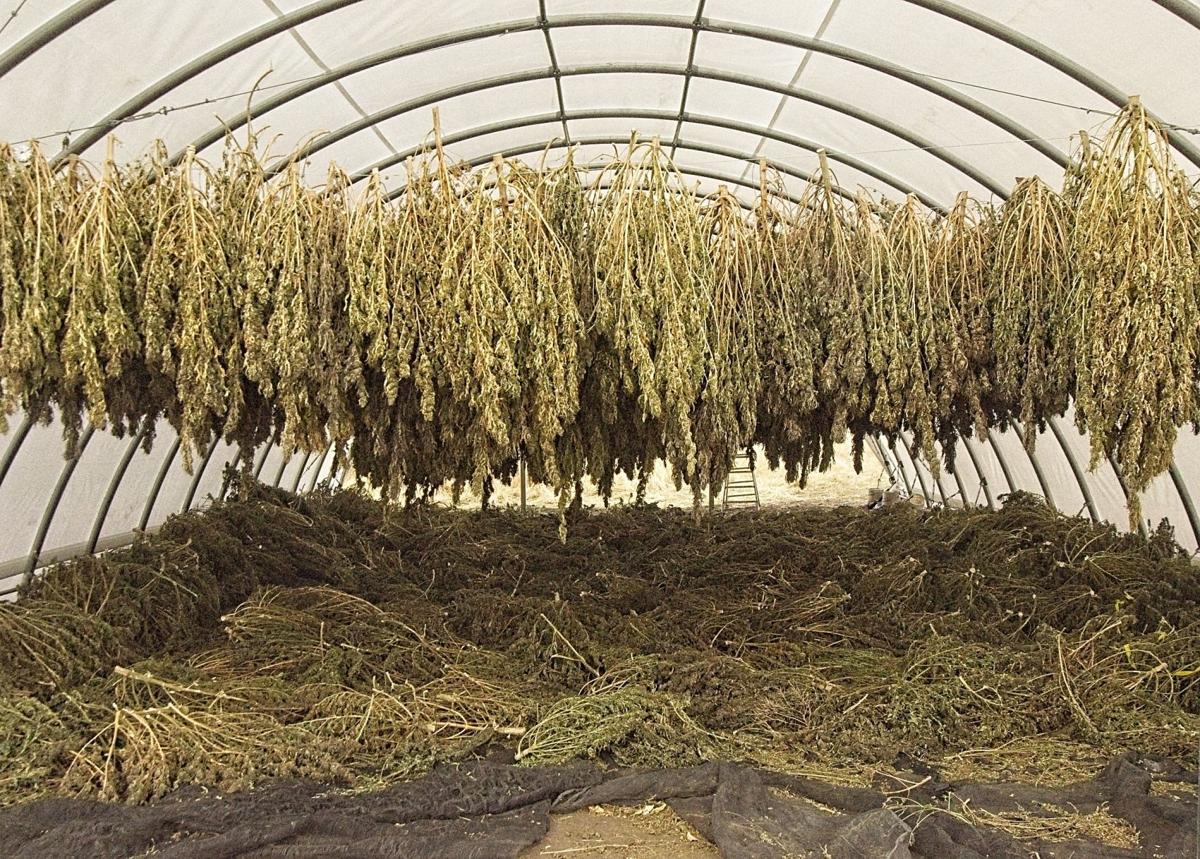 Part of Shane Kimball’s hemp crop hangs in a Quonset hut at his farm east of Joseph. He estimates this year’s bumper crop will yield about 3,000 pounds of buds.

Hemp farmer Shane Kimball, of Joseph, examines drying hemp buds in a Quonset hut at his farm east of Joseph. He says to look at them, you can’t tell hemp from marijuana; it’s only with a chemical test that the difference can be determined.

Part of Shane Kimball’s hemp crop hangs in a Quonset hut at his farm east of Joseph. He estimates this year’s bumper crop will yield about 3,000 pounds of buds.

JOSEPH — In his third year of growing hemp in Wallowa County, Shane Kimball is getting high — a high yield and high profits with a high-elevation crop.

But the crop doesn’t give the kind of high that its intoxicating cousin, marijuana, does. He is one of about 1,650 Oregon farmers who have pioneered production of hemp since the crop was permitted by Oregon in 2015 and legalized nationally in the 2018 USDA Farm Bill.

“I’ve been researching hemp for over 25 years and I’m very familiar with the things that it can do,” Kimball said at his Joseph-area farm.

Kimball raises the 6-foot-high plants for their buds and flowers, from which he produces cannabidiol (CBD) oil.

Marijuana and hemp are both plants in the genus Cannabis. Many modern botanists, including the USDA, classify the genus Cannabis as having only one species, sativa, with varieties consisting of indica (Indian hemp — with a subvariation called Gigantea or giant hemp), ruderalis (wild hemp), and vulgaris (cultivated hemp). However, most food and fiber comes from C. sativa. Marijuana and hemp are varieties of the same plant — with one very important distinction.

Although both contain THC and CBD, plants classified as hemp must contain less than 0.3% of the mind-altering substance tetrahydrocannabinol (THC.) But hemp usually contains higher levels of the medicinal substance CBD than its psychoactive cousin.

CBD does appear to produce significant changes in the body and some research suggests that it has medical benefits, including reducing anxiety, preventing seizures and reducing inflammation. The increasingly prevalent use of hemp is for the CBD oil used in medicinal and cosmetic applications.

“I make a salve and a tincture,” Kimball said. “I make one that if you take internally it’s really good for anxiety, concussion.”

He recently suffered concussion and is finding CBD helpful in his recovery. He learned of CBD oil’s purported value to heal concussions from a former NFL quarterback at a convention of the Hemp Industries Association. He said many in the NFL use CBD oil because of all the concussions suffered in the game. Kimball was a member of the association, which is one of the oldest hemp promoters in the U.S., and he considers himself a hemp pioneer.

This year, Kimball planted 7 acres in his fields in Joseph and Lostine.

“Last year I grew 5 acres and this year I grew 7 but I got a bumper crop this year,” Kimball said. Kimball’s Lostine crop did well, producing almost four times as much as the previous year. He is certain his farm east of Joseph is the highest-elevation hemp farm in the state.

He estimates he’s harvested what will amount to about 3,000 pounds of hemp flowers. He has plants hanging to dry in one Quonset hut, three greenhouses, a shop full “and then I have another undisclosed location that’s probably all that combined. I’ve got about three times as much as I had last year. I’m just getting better at growing it, honestly. I’ve just learned a few things.”

He claims credit for the idea to alter Oregon’s limit on four marijuana plants per person to four plants of hemp, marijuana or a mix of the two.

“Believe it or not, I’m the guy who had the idea,” Kimball said.

As with any farmer, profit — and staying in business — depends on the market.

Kimball said he removes the buds from the plants to process them.

“I’m mostly in the flower market. I sell the flower to different folks and the leftovers I turn into the oil,” he said. “Last year, I got probably $50,000 an acre gross. But the oil prices have dropped.”

“Now there’s 40-some thousand acres in Oregon, so the economy’s a scale.”

Kimball may be estimating a little on the light side.

The Register Guard reported in July that there were 1,642 registered hemp farmers in Oregon compared to 584 registered last year. According to the Oregon Department of Agriculture, those farmers registered to plant more than 53,000 acres.

He said one of the biggest problems faced by growers is contamination from hemp and marijuana pollen and pesticide drift. Hemp pollen travels at least 3 to 5 miles and probably more, he said.

“It’s only going to take a few people who don’t know what they’re doing to ruin it for everybody else,” he said.

Legalization under the farm bill has, at least, reduced one headache.

“Now that it’s federally legal to grow hemp, the banks have been way more cooperative this year,” Kimball said. “I hear that if you’re in the marijuana industry, it’s still difficult.”