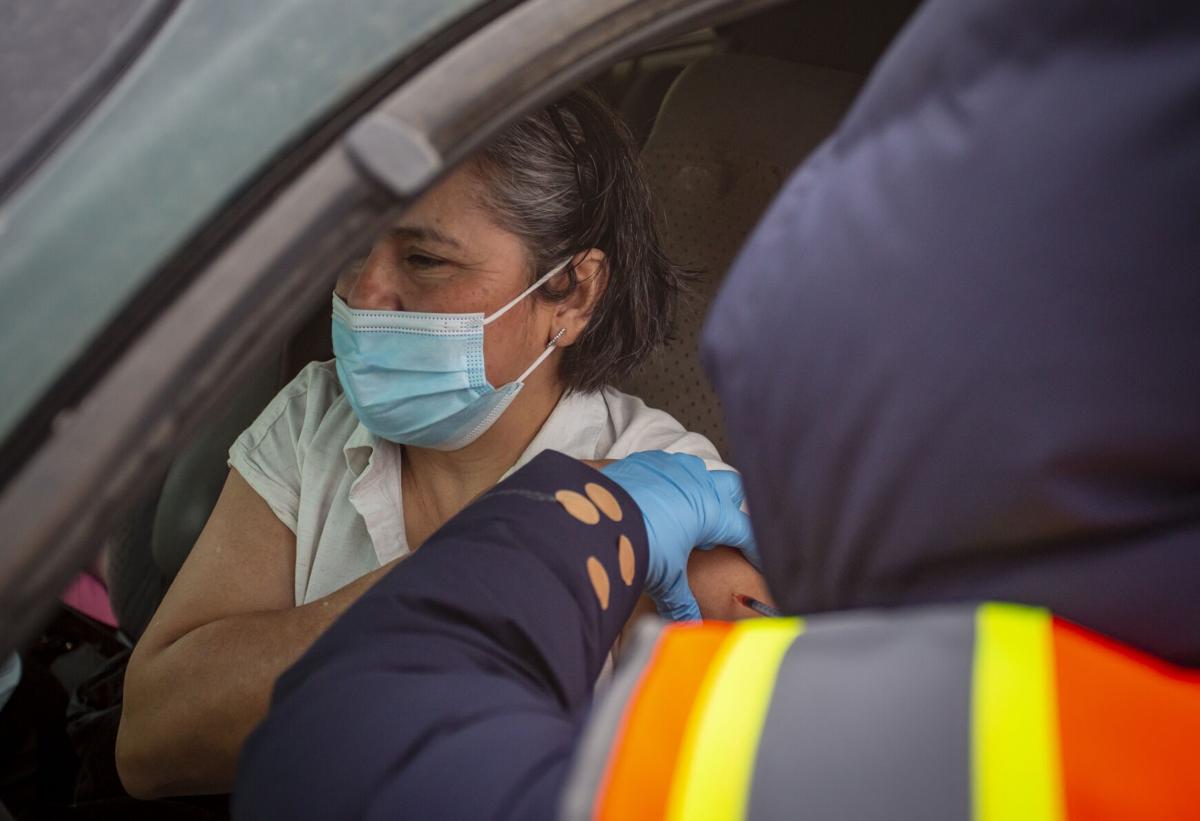 Maria Corona receives her first dose of the COVID-19 vaccine during an event for farm and food processing workers at the Sage Center in Boardman on Wednesday, March 24, 2021. 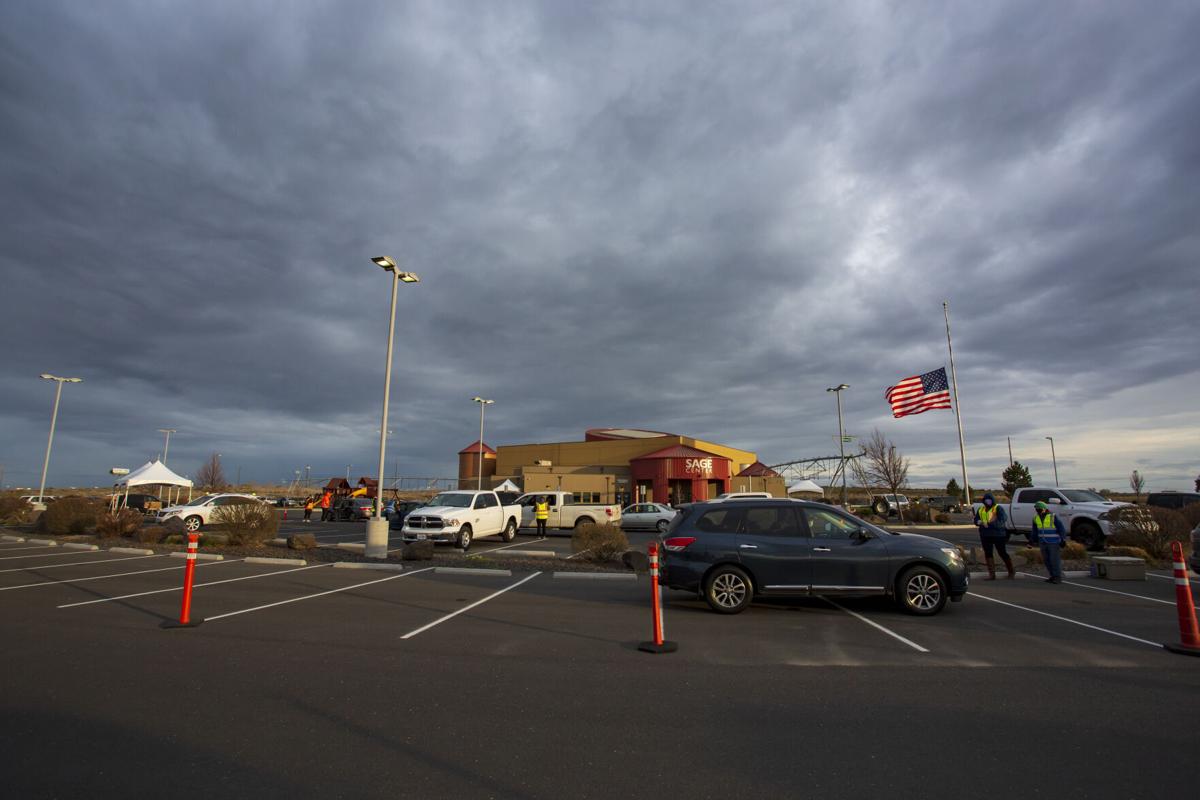 A driver waits in an observation area after receiving a dose of the COVID-19 vaccine during a vaccination clinic at the Sage Center in Boardman on Wednesday, March 24, 2021. 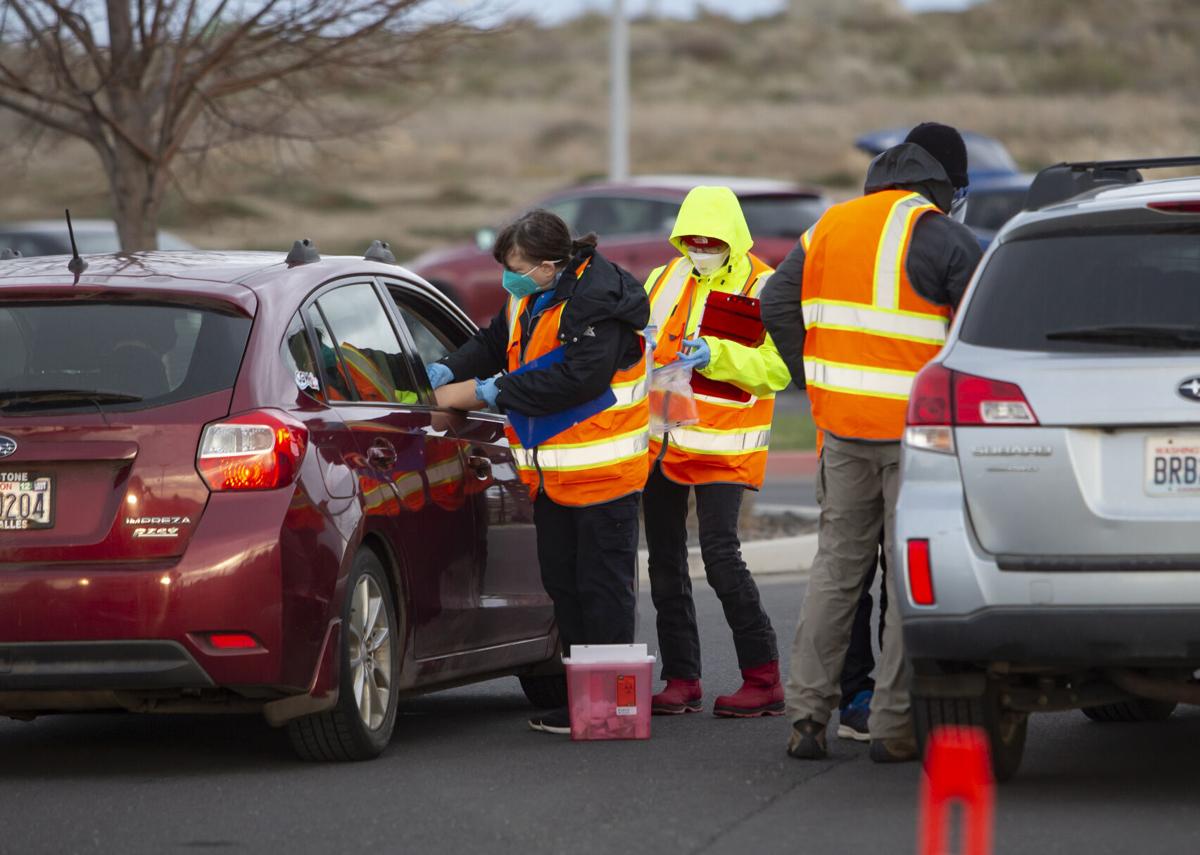 Staff at a COVID-19 mass vaccination clinic at the Sage Center in Boardman administer doses of the COVID-19 vaccine on Wednesday, March 24, 2021.

Maria Corona receives her first dose of the COVID-19 vaccine during an event for farm and food processing workers at the Sage Center in Boardman on Wednesday, March 24, 2021.

A driver waits in an observation area after receiving a dose of the COVID-19 vaccine during a vaccination clinic at the Sage Center in Boardman on Wednesday, March 24, 2021.

Staff at a COVID-19 mass vaccination clinic at the Sage Center in Boardman administer doses of the COVID-19 vaccine on Wednesday, March 24, 2021.

BOARDMAN — Maria Corona knew she wanted to get the vaccine. Three months earlier, eight of her family members tested positive for COVID-19. So had many of her coworkers and neighbors.

“I was really concerned,” said Corona, who, at 49, spends half the year working in food processing plants and the other half working in the fields near her home in Boardman. “You hear a lot in the news that people are dying, so you get afraid.”

The day after Corona learned through Facebook that she and her coworkers were eligible to receive the COVID-19 vaccine, she hopped in her Dodge Caravan and made her way down to the SAGE Center, where state and county health officials were offering doses to farmworkers in a four-day clinic that was the first of its kind.

“In order to not infect other people, to feel safe with your family and to be secure is what’s most important,” Corona said through a translator after getting her vaccine on Wednesday, March 24.

Akiko Saito, deputy director for the COVID-19 response and recovery unit, a joint division between the Oregon Health Authority and the Oregon Department of Human Services, said the clinic was a “pilot project” specifically geared to immunize a community long understood to be especially vulnerable to COVID-19.

In all, officials vaccinated over 1,000 agricultural workers at the clinic, according to the Morrow County Health Department.

Saito said state officials are looking to hold similar efforts statewide. State officials recently conducted a survey with 585 agricultural facilities that showed more than 21,000 workers were eligible for the vaccine.

“We’re working with our local public health authorities to connect agricultural, migrant and seasonal workplaces to see if they can do an event(s) like this” across Oregon, Saito said.

The clinic began two days after Morrow County received approval from the state to move ahead and start vaccinating farmworkers after sufficiently providing doses to all other eligible groups.

At least 20 counties, most of them east of the Cascades, received approval from the state last week, including Umatilla County.

The change also comes just in time for harvest season, which brings thousands of jobs to the area. Morrow County Public Health Director Nazario Rivera said harvest season can bring as many as 8,000 workers to the region annually.

“We want to make sure we get some of these vulnerable communities,” he said. “We know with the season changing to spring, a lot more farmworkers are going to be out there. So if we can get them now, before the season starts, it’ll be a lot easier to get them vaccinated, rather than having to ask them to take time out of their busy schedules to come get a vaccine.”

It’s a workforce that drives the region’s economy, but is widely known to place workers, many of whom are Hispanic and Latino, at increased risk of infection.

In Morrow County, Hispanic residents have accounted for 57% of the county’s total COVID-19 cases, according to data provided by county health officials earlier this month. About 38% of Morrow County’s population is Hispanic, according to 2019 U.S. Census data.

Similar trends have been reported in Umatilla County, where residents reporting Hispanic ethnicity accounted for 41% of the county’s total COVID-19 cases in 2020, according to data from the county health department. The population also tested positive at a rate over three times higher than non-Hispanics, the data shows.

Saito said the event was a collaborative effort between a number of groups to immunize a community they recognize as a “priority population.”

“We know they’re exposed because they have to be close together when they work, and there’s been a lot of racism and injustice that’s happened over time,” Saito said, adding that “ending health inequities” is part of the state’s 10-year plan. “This is one of the ways we’re making sure we have an equity focus and that we’re looking at those populations that have been disproportionately infected and who have historically been underserved.”

Officials have said working conditions in essential workplaces have been a driving factor behind the pandemic’s disproportionate impact on Hispanic communities nationwide.

“We have this whole row of processing plants, so (it’s) definitely a high-risk community,” Rivera said, looking out at the cars moving swiftly through the clinic, dwarfed by the large industrial facilities in the background.

Because of this, everything down to the scheduling of the daily clinics was geared to accommodate agricultural workers, partly because they often cannot take time off work to get a shot, Rivera said. He added that the health department engaged in a variety of efforts to inform residents about the clinic, like advertising it on local Spanish radio stations.

Similar efforts are ongoing in Umatilla County, where county health officials have been reaching out to agricultural facilities to bring vaccines to workers while they’re on the job.

Umatilla County officials have said they also want to hold similar efforts as the Morrow County clinic, particularly because the state brings more doses with them, which could help with the county’s dismal vaccination rates, which remain the lowest in Oregon, according to state data.