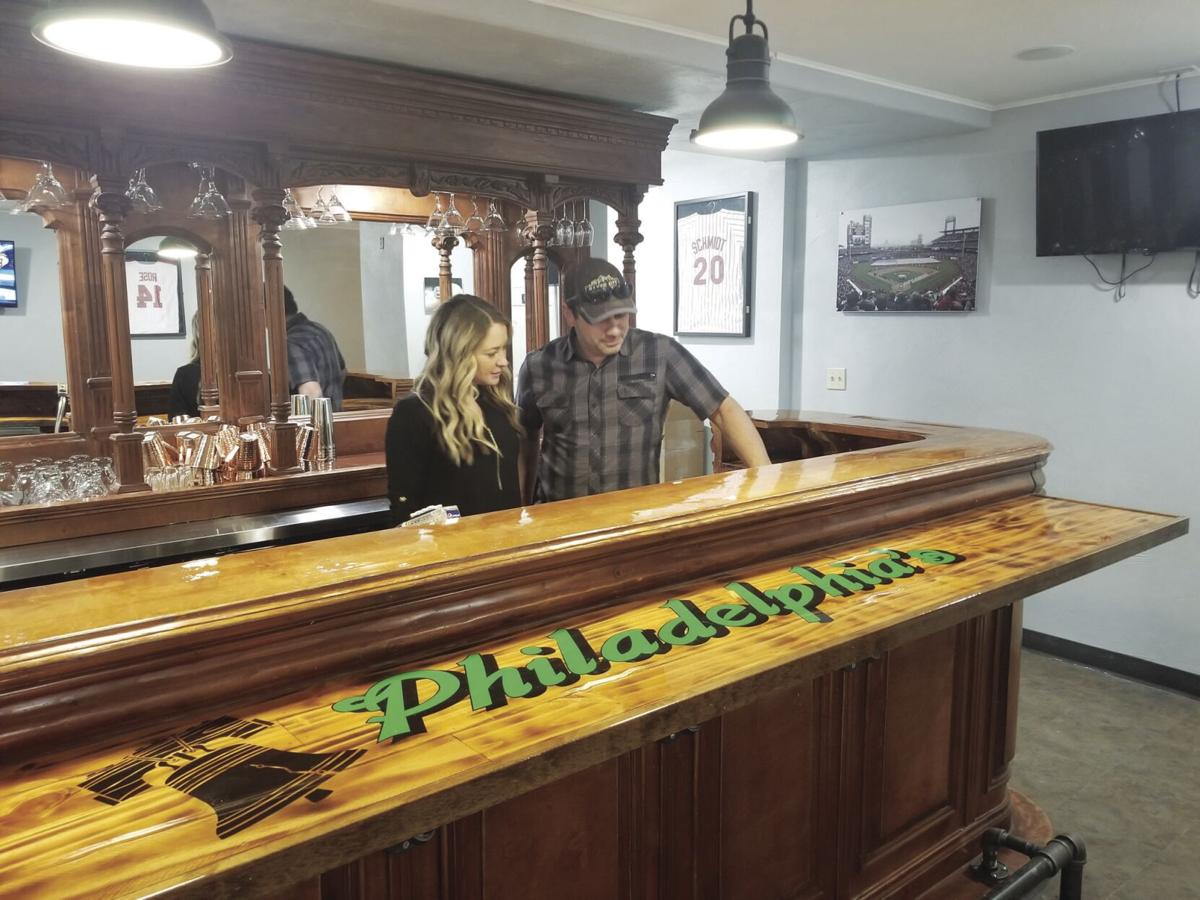 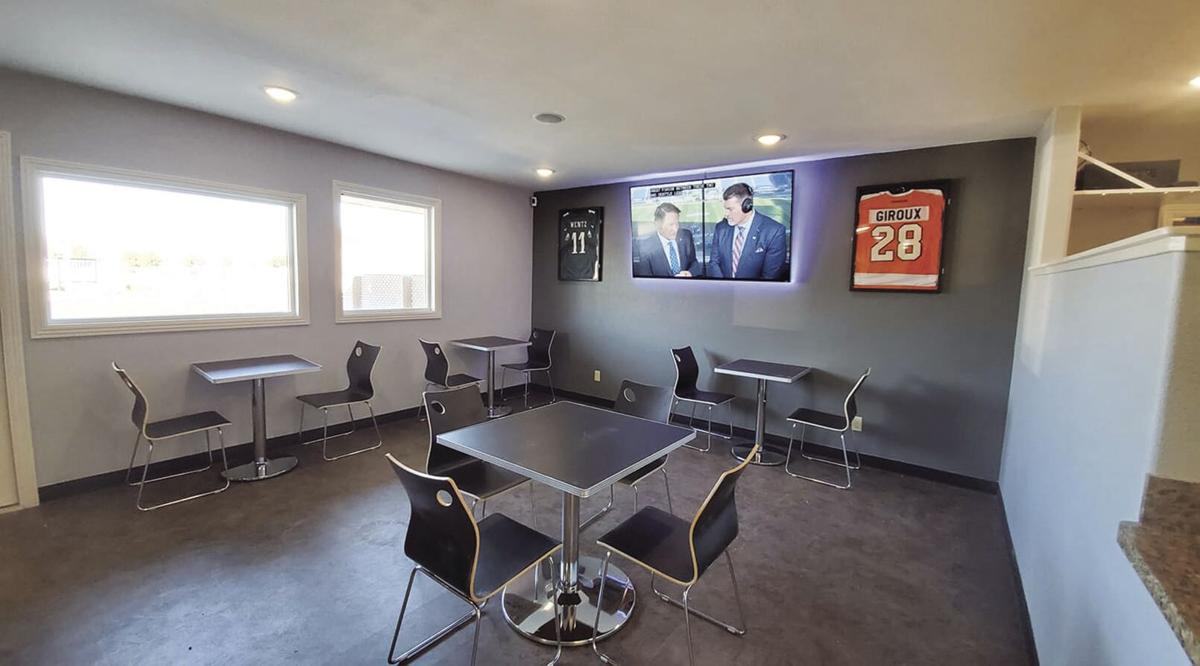 Philadelphia’s, a new restaurant in Baker City, includes a family dining area and a separate bar. The restaurant will be limited to offering takeout meals initially due to state-mandated COVID-19 restrictions.

Philadelphia’s, a new restaurant in Baker City, includes a family dining area and a separate bar. The restaurant will be limited to offering takeout meals initially due to state-mandated COVID-19 restrictions.

BAKER CITY — Tom Busciglio and Meghan Froemke are preparing to open a restaurant during a pandemic that has severely hampered their industry.

This is not a detail they have overlooked. The couple both give rueful grins when asked about the timing. It is a question they obviously expected.

And one they’ve answered many times this summer and fall while renovating the Baker City building that will house Philadelphia’s — Cheese Steaks, Wings & More.

“That’s kind of a loaded question, isn’t it?” Busciglio says with a chuckle.

He concedes it’s hardly ideal to unveil a sit-down restaurant and bar when the state is limiting such businesses to takeout meals or outdoor dining — the latter not a plausible option in a place where the average high temperature in early December is 38 degrees.

In Baker County, one of 25 counties state officials deemed in the “extreme risk” category, those guidelines will remain in place at least through Dec. 17.

The couple plan to open the restaurant on Monday, Dec. 7. Check the business’ Facebook page, facebook.com/philadelphiasbc, for details.

Busciglio is optimistic the pandemic’s restrictions actually will entice diners, who are frustrated by the ongoing limitations, to sample Baker City’s newest fare.

“I think people in Baker are ready for something different, something new,” said Busciglio, 45, who has lived in Baker City for about 12 years.

What he and Froemke are offering is the meal made famous in Philadelphia — the cheesesteak sandwich.

“The crown jewels of our menu are the Philly cheesesteak and the hot wings,” Busciglio said.

The latter will come in 10 flavors.

One side of the building at 975 Campbell St., just east of Safeway, will have tables for family dining — when the ban on indoor dining is lifted. The other side is a bar.

And although Philadelphia’s is brand-new, this span of polished wood is anything but.

Busciglio said the handmade bar, which he acquired from a friend, is about 100 years old. In past decades, schooners of beer slid across its smooth surface at a saloon in John Day.

Froemke said she and Busciglio refinished the wood and had new windows cut for the backbar. They had to trim a couple feet from the bar, as its original 12-foot length was too much for its new space.

Reviving this piece of history was one of the couple’s myriad tasks since they bought the building in late August.

“I’ve been down here seven days a week,” Froemke said.

They replaced the lighting fixtures, remodeled the bathrooms, painted, and installed sinks and other items in the cooking area.

There is a TV on the wall in the dining area and another in the bar. There are several pieces of Philadelphia-themed memorabilia, including a framed jersey from Mike Schmidt, the Hall of Famer for the Philadelphia Phillies baseball team.

Except for electrical wiring, the couple did the work themselves.

That was possible in part because Busciglio already owns a business, Baker City Plumbing. He said he’ll continue to operate the venture. He needed but a single word to describe the challenge of juggling two jobs, either of which was by itself a full-time endeavor.

“There’s days when it’s hard to hold it all together,” Busciglio said.

“I try to keep him sane,” Froemke said with a smile.

But as he nears the culmination of a goal he’s had for about a decade, Busciglio is eager, and a trifle nervous, to serve his first Philly cheesesteak.

“All the range of emotions,” he said.

Busciglio said he’s been preoccupied with the seemingly endless list of preparations — and not only during the day.

“You just never stop thinking about it,” he said. “I wake up at night and my brain keeps going.”

Busciglio said on a recent restless early morning he couldn’t get back to sleep until he had gone online and ordered something needed for the restaurant.

Although opening a restaurant was a long-held goal for Busciglio, it wasn’t until this March that, as he puts it, “things just kind of fell into place.”

The Campbell Street building, which previously housed Crave A Bowl restaurant and an insurance office, was available.

Then word began to spread about a virus most people had never heard of.

“Then COVID hit,” Froemke said. “We were just hoping it wasn’t going to last this long.”

The pandemic had begun to ease somewhat when the couple closed the deal on the building in late August and started remodeling. But as they neared their planned mid-December opening, the number of new COVID-19 cases rose rapidly in Baker County and across the state and nation.

Oregon Gov. Kate Brown imposed a series of restrictions that first limited indoor dining and then eliminated it altogether in some counties, including Baker.

But Busciglio and Froemke said they’re confident their opening, even limited to takeout meals, will be successful. Busciglio believes Baker City residents will appreciate the authentic taste of his cheesesteaks. He lived near Philadelphia for about a dozen years, during which he developed an affinity for the City of Brotherly Love’s signature sandwich.

“It’s an influence that never really went away,” he said.

The sandwiches will be made with sliced choice ribeye steak. The buns will come from a bakery that’s actually in Philadelphia.

“It’s about as authentic as you can get,” Busciglio said.

“We’re trying to use a high-quality ingredient with all our dishes,” Busciglio said.

Because all meals will be cooked to order, Philadelphia’s will be taking phone orders to start, and customers can pick up their meals at a drive-thru window. Busciglio said because sandwiches and other items won’t be made until they’re ordered, he doesn’t think it’s feasible to have customers drive up, order and then wait.

The couple said they’ve been able to find employees who have been flexible in dealing with the changes dictated by COVID-19 restrictions.

“We appreciate how understanding they’ve been,” Froemke said. “They’re excited to come to work.”

“I think we’ll weather the restrictions OK,” Busciglio said. “It is what it is.”

“I think people in Baker are ready for something different, something new."