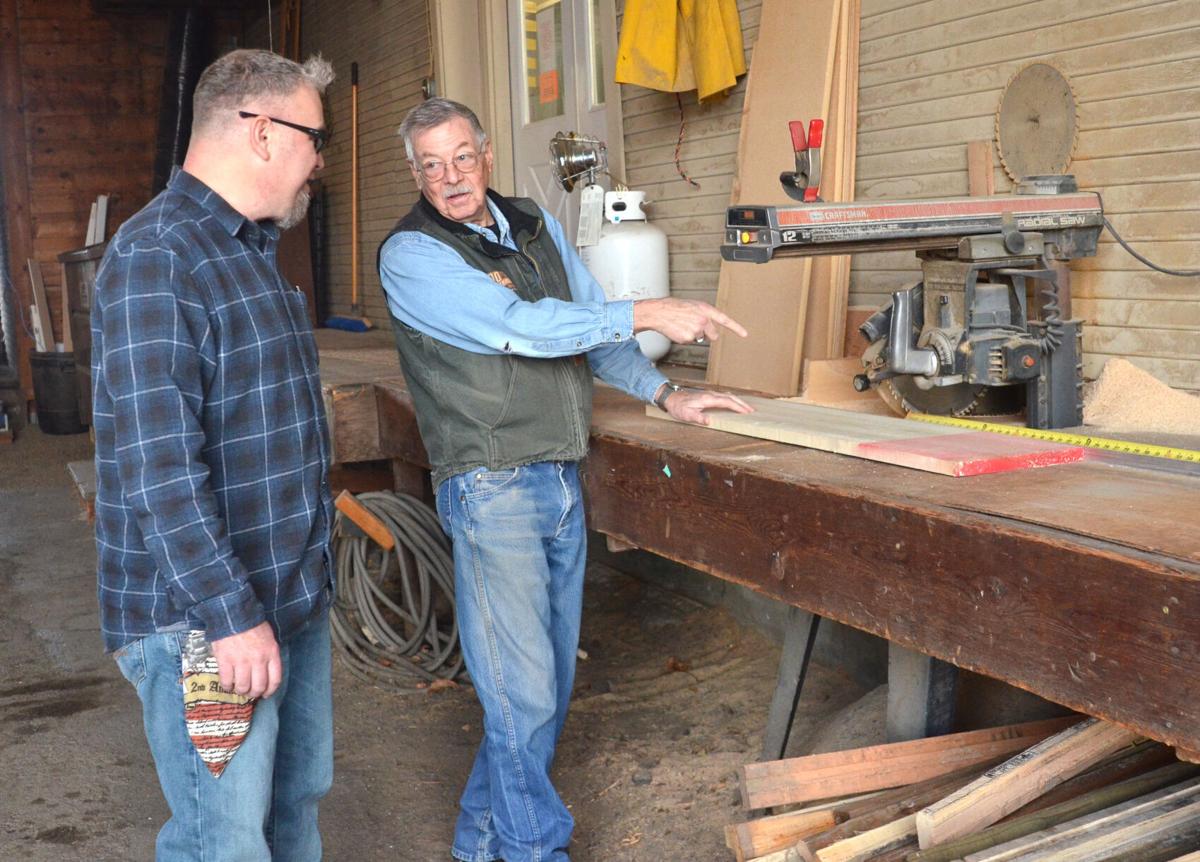 “Don’t put your finger in there,” Jim Russell warns Kevin Coddington at 1917 Lumber in Joseph. Russell, who has owned the lumberyard since 1976, recently sold the business to Coddington. 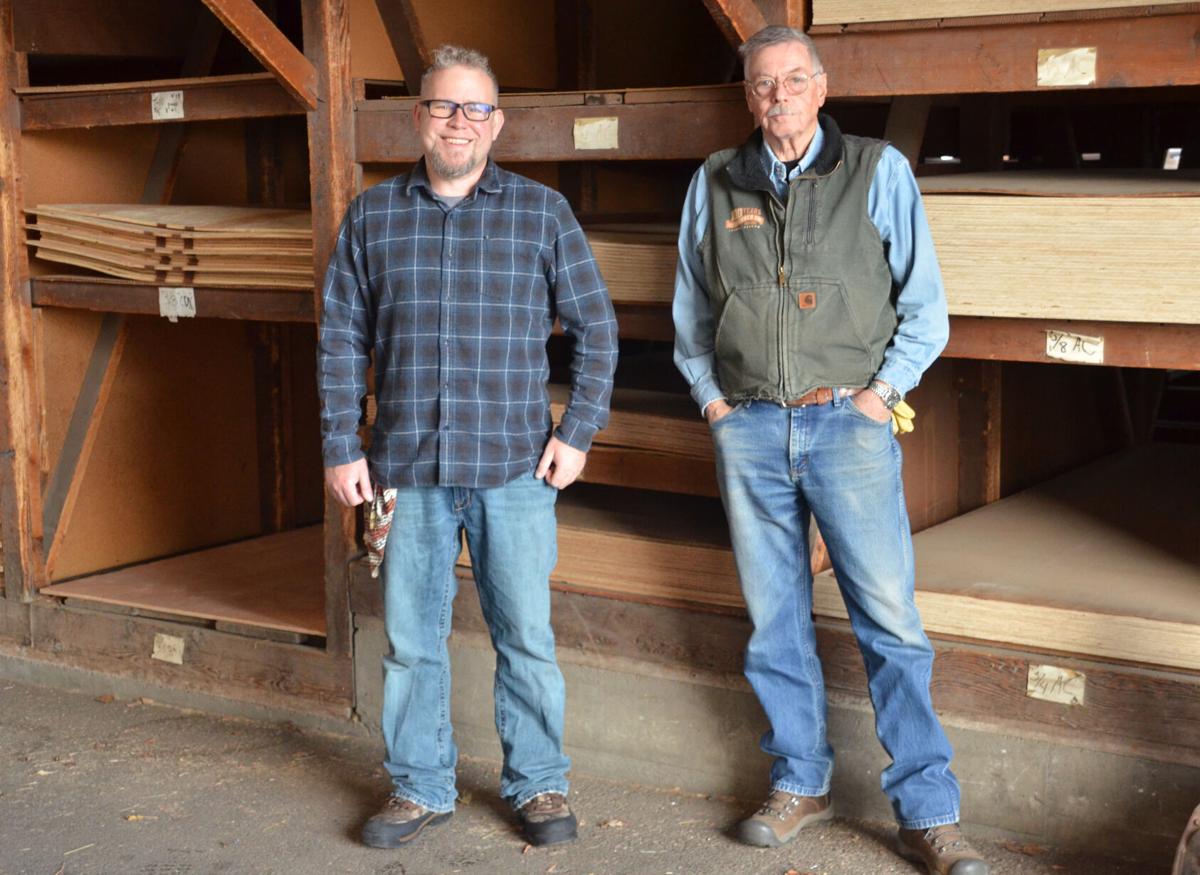 Kevin Coddington, left, the new owner of 1917 Lumber in Joseph, is learning the business under the guiding hand of longtime owner Jim Russell. Coddington took over Jan. 1, 2021.

“Don’t put your finger in there,” Jim Russell warns Kevin Coddington at 1917 Lumber in Joseph. Russell, who has owned the lumberyard since 1976, recently sold the business to Coddington.

Kevin Coddington, left, the new owner of 1917 Lumber in Joseph, is learning the business under the guiding hand of longtime owner Jim Russell. Coddington took over Jan. 1, 2021.

An earlier version of this story reported this was Wallowa County's only lumberyard. That was incorrect. The Observer updated the headline, article and a photo caption to reflect the correction.

JOSEPH — After operating 1917 Lumber for 44 of its nearly 104 years in business, Jim and Terri Russell sold their Wallowa County lumberyard to Kevin and Nancy Jo Coddington as of Jan. 1.

In a recent interview, Jim Russell explained why he decided to sell after so long.

Coddington said finding the lumberyard for sale helped him and his family achieve a life’s goal.

“I told people a couple of years ago, we’d been vacationing out here for several years and we loved it so much, if we could find a way to make a living, we’d move out here,” he said.

The Coddingtons had been living and working in Eugene until about three months ago. Both of them had grown up in small towns and and had not found what they wanted for their family in the city. The Coddingtons have four children, ages 2-12.

“We wanted to get out of Eugene and raise our kids in a small town,” Coddington said. “After a lot of prayer and discernment, we ended up out here. Like I said, I’ve told people if I could make a living here, I’d do it and someone said we ought to look at the lumberyard; it’s for sale, the guy’s been doing it for a lot of years and he might want to sell. So I gave Jim a phone call and after a bit of work and figuring on both parts, we made it work.”

Coddington said his wife’s relatives, Brad and Missy Farmer, were a major component in making it happen.

“Really, the force behind it was my wife’s aunt and uncle — they had bought a house here and might retire here next year — and he wanted to get involved in a business locally,” Coddington said. “He’s got sawdust in his blood and been working in lumberyards for 43 years. … His idea of retirement was to buy a lumberyard.”

The Farmers are partnering with the Coddingtons financially in the Joseph venture and once they move here, they’ll help operate it, Coddington said.

But for now, he’s still learning the business.

“Jim was very accommodating and helped me through the process,” Coddington said. “Now he’s holding my hand for another three months. I’m going to the Jim Russell College of Lumber for the next three months.”

“We’ll see what kind of a teacher I am,” Russell said. “He’s a pretty good student so far.”

He spoke highly both of the lumberyard and the community in which it operates.

“I’ve had a very warm reception. Everyone’s been very welcoming,” he said. “Before the deal was done with Jim, I had a hard time explaining exactly why I was here. Of course, everyone’s curious when you’re new in town. I left a wonderful job and sold a wonderful house and people were wondering what you’re doing.”

He plans to keep things much as they’ve been, with the same staff and same business practices.

“We’re happy to meet the needs of the builders in the county,” he said.

As for the Russells, they have no plans to move and are eager to find new interests. They’ll be doing “any damned thing we want,” Jim said. “My roots are three generations deep here.”

They have three grown children, one of whom still lives in the area.

There also are two grandchildren who they’ll have more time to spoil.

As for the changing of the guard at 1917 Lumber, both spoke positively.

“I wish Kevin and his family well,” Russell said.

“I just want to thank the community and St. Katherine’s Church in Enterprise for welcoming us,” Coddington added. “Everyone has reaffirmed that this was a good decision for my family.”