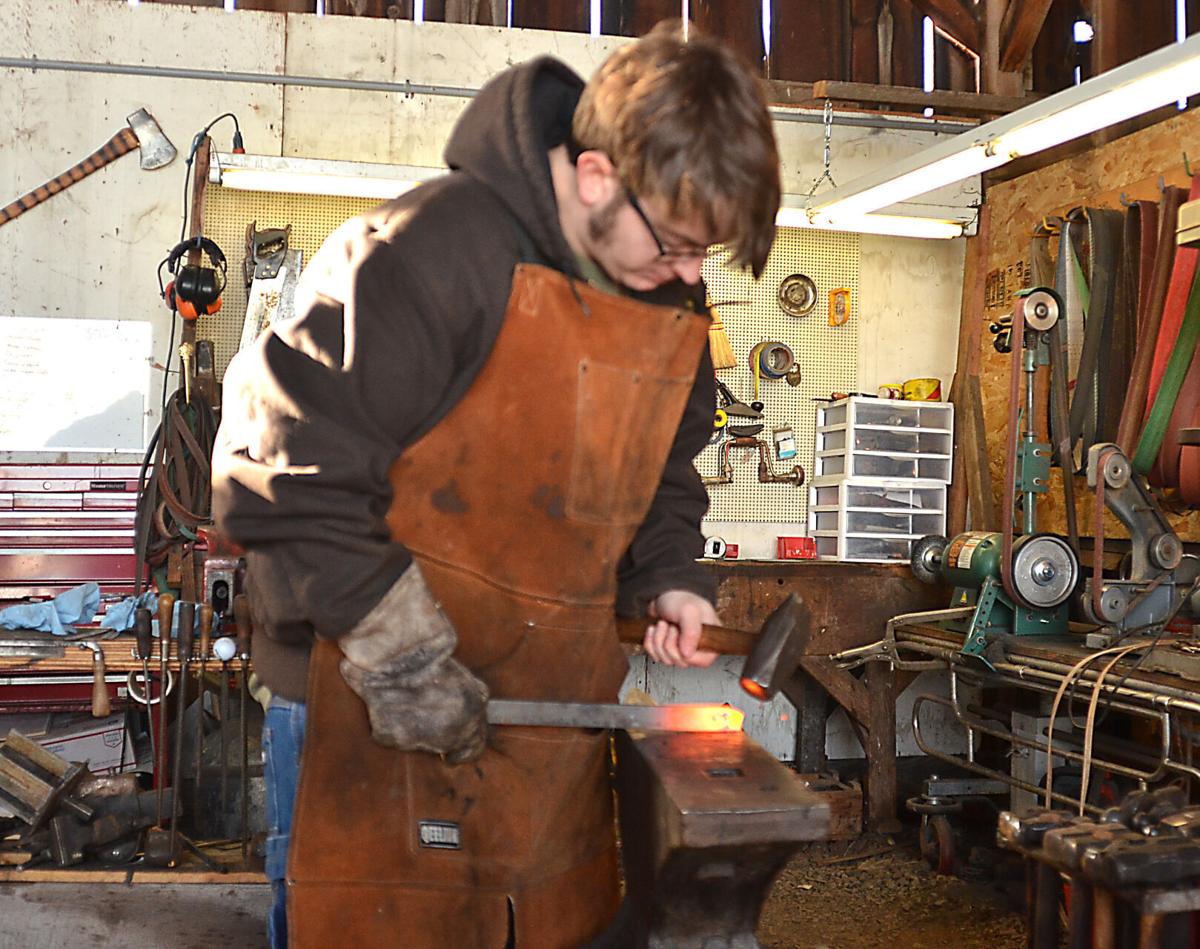 The red from a hot piece of raw steel fresh from the forge reflects off Andy Boyd’s hammer as he shapes the steel on the anvil at his shop at Boyd Blacksmithing in Lostine. Boyd is becoming known for the quality knives he makes. 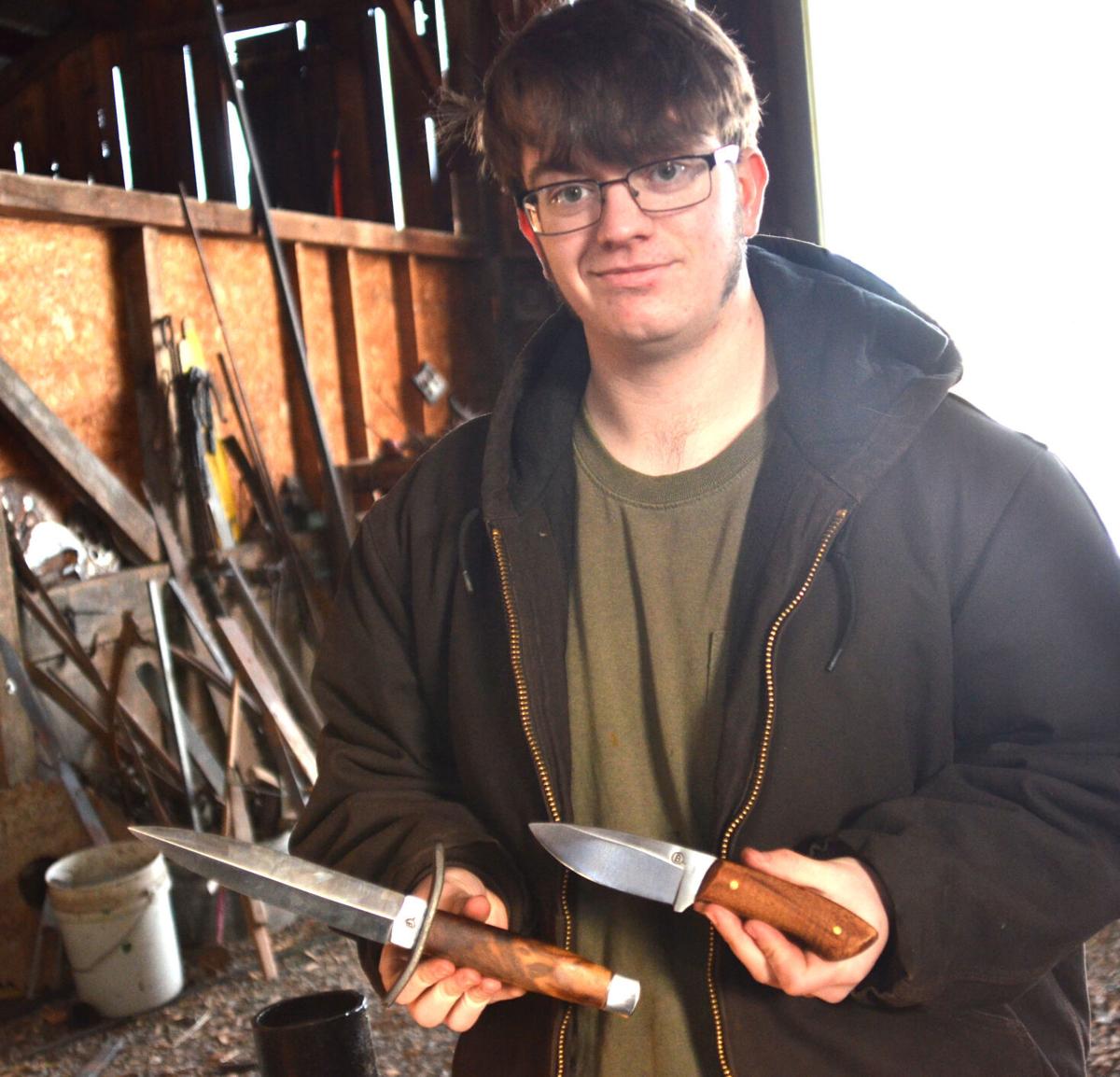 Andy Boyd shows a couple of the quality knives he’s made at Boyd Blacksmithing, his business in Lostine. The knife on the left is really a letter opener designed to look like a dagger. The knife on the right is a standard hunting knife.

The red from a hot piece of raw steel fresh from the forge reflects off Andy Boyd’s hammer as he shapes the steel on the anvil at his shop at Boyd Blacksmithing in Lostine. Boyd is becoming known for the quality knives he makes.

Andy Boyd shows a couple of the quality knives he’s made at Boyd Blacksmithing, his business in Lostine. The knife on the left is really a letter opener designed to look like a dagger. The knife on the right is a standard hunting knife.

LOSTINE — He’s a young entrepreneur operating a young business in an age-old profession. Andy Boyd is hammering out a niche for himself with Boyd Blacksmithing in Lostine.

Recently, Boyd showed the knives he makes at the Holiday Bazaar at the Joseph Community Center.

“I started out with knives. They’re my bread and butter,” he said. “But I do a lot of actual blacksmithing work, making blacksmithing tools and decorative hooks, bottle openers, horseshoes, gates and all sorts of metalwork.”

The 19-year-old has been operating his business for about two years out of a shop at the home of his parents, Rick and Robin Boyd, in Lostine. He started learning about blacksmithing about three years ago from Alec Steele on YouTube, a young man about Boyd’s age in the United Kingdom.

“He’s got the biggest shop you’ve ever seen with some impressive tooling,” Boyd said. “He makes all sorts of old-school weaponry.”

Some of Steele’s work has influenced Boyd.

“I’ve made a sword and a couple war axes and stuff like that,” he said.

He also has learned his craft from Mike Rowley, long-time teacher and former football coach at Enterprise High School, who was featured on the History Channel show “Forged in Fire” and won a competition there.

“I learned a lot of knife-making from him,” Boyd said.

He also learned from a friend in Walla Walla, Washington, Nathan Thompson, a more traditional blacksmith.

Boyd attended school in Enterprise through the seventh grade. Then he went to the Seventh-day Adventist School for a couple years and homeschooled during high school. So far, he’s put off thoughts of college, particularly while the COVID-19 pandemic rages.

“I’m taking a gap year now with how things are going,” he said.

Boyd said the belts used on his grinder are the most expensive resources he uses, with the cost of propane for his forge and steel for raw materials some of the least expensive.

“Recently I’ve been using recycled steel,” he said. “But some of that has had cracks in it, mostly because it’s already had a tough life. So I’m starting to get into the market of buying new steel.”

Buying steel can be difficult, he said. He often buys from a steel supply yard in La Grande, where it comes in 20-foot rods that he cuts in two and puts in the back of his pickup for transport.

“It seems like everybody’s getting into this right now,” he said, noting there are several smiths in the county and in the region.

Boyd also welds, though it’s not his primary craft.

“I don’t really advertise it that much because it’s not that pretty looking. But they’re strong welds,” he said. “I like to say I weld for myself.”

Largely a one-man operation, Boyd at times gets his dad or a friend to come in and hold a piece of heated steel while he hammers it on the anvil.

Boyd said his favorite objects to make are the Damascus steel knives.

“That’s mostly because of the outcome,” he said. “They get some really cool patterning.”

He said Damascus steel is several layers of different steel that can show up in the finished knife. Items such as chain saw chains or ball bearings can add an interesting pattern to the blade.

Does he hope to make this his life’s work?

“I might, but sometimes it doesn’t make the best money for the hours you put into it,” he said. “If I can, I’d love to.”

But like many starting businesses, it takes effort to build a customer base.

“Right now, a lot of it is people coming to me and saying, ‘Can you make this knife? It’s for my uncle,’ and stuff like that,” Boyd said.