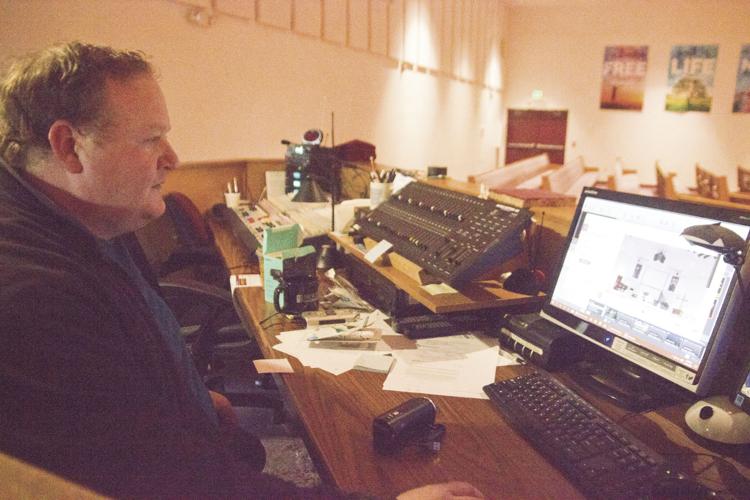 La Grande Church of the Nazarene pastor Kevin Goss adjusts computer settings for the camera the church began using in March 2020 to livestream its services in response to government moves to reduce gathering sizes during the COVID-19 outbreak. 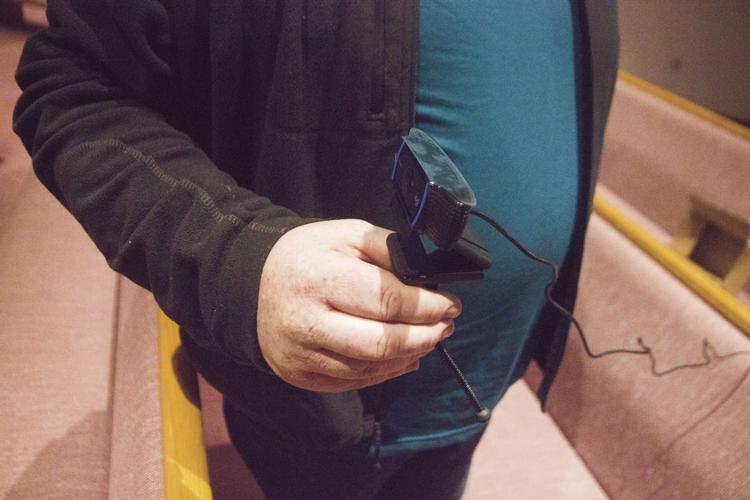 La Grande Church of the Nazarene pastor Kevin Goss holds the camera the church will use starting Sunday to livestream its services, which it is doing in response to government moves to reduce gathering sizes during the COVID-19 outbreak.

LA GRANDE — Faced with state and federal mandates to reducing gathering sizes to curb the spread of coronavirus, many of the area’s churches are finding different and creative ways to worship.

Churches in the Grande Ronde Valley are using measures ranging from livestreaming — which many do already — to meeting in smaller groups on Sunday mornings as they tackle the challenge of providing worship and a sermon to parishioners with group limits capped at no larger than 25 and recommended at no more than 10.

And they are doing so with an understanding of the need of social distancing to slow COVID-19.

“We feel that it is important to respect that and try to slow down the spread of the virus,” said Bud Duncan, elder at Imbler Christian Church, pointing to the recommendation of 10 in a group as the number they are going by.

Duncan said about 80 people attend Imbler Christian Church on Sundays. The church posts its sermons as podcasts, he said, and considered streaming the service online. Instead, church leaders will hold smaller studies Sunday morning to comply with the government recommendation.

“What we’ve done is basically on Sunday worship we’re going to have small groups. The five elders in the church will each host a small group, and if need be others can help out,” Duncan said, noting the group meetings will be the same 10 a.m. time of their regular service.

Several churches will be videoing either their worship session and/or sermon live as they take place Sunday or prerecording them for worshippers to take in whenever they want during the week.

"We're being very intentional in using language that 'Church is not canceled, it's gone digital.'"

— Kevin Goss, pastor of La Grande Church of the Nazarene

For the La Grande Church of the Nazarene and La Grande First Baptist Church, videoing their messages is a new venture.

Kevin Goss, pastor of La Grande Nazarene — which typically has around 130-140 attendees — said his church made a late decision to stream its sermon last Sunday on Facebook Live using a phone, then decided to take a further step and upgrade its gear to better stream upcoming sermons on YouTube.

“The service will go online,” Goss said. “We’re being very intentional in using language that ‘Church is not canceled, it’s gone digital.’”

Sharon Binder, secretary at First Baptist, said the church also is entering uncharted waters getting the sermon to their 200 attendees — and anyone else who wants to watch. The church has, though, done audio recordings of its sermons.

“We’ve been working on livestreaming, which we are doing this Sunday,” she said. “This is our first Sunday livestreaming ever.”

Faith Center in Island City is among churches that already stream their services, and it will continue to do so.

Cameron Hefner, pastor at Faith Center, said the staff was working on plans to alter Sunday mornings as typically around a total of 400-500 attend the church’s two services.

Hefner said the church recorded the March 15 service and was “promoting watch parties where people could be invited over” to view the recording and worship together at one another’s homes. With the new mandates on group sizes, smaller watch parties are being recommended. Now in their second week of recording worship, this week Hefner said the sermon will be recorded from a home rather than from the church building’s stage.

“We’re hoping that will help translate to a more personal (level),” Hefner said.

“We will have a separate gathering that goes on at the same time for overflow purposes. That way we’ll be able to function.”

In Union, the Baptist Church will meet Sunday but in a different capacity while also developing a plan to allow for a small-group setup. Nick Ham, associate pastor, said the church will admit up to 25 attendees in the the sanctuary and will use its youth group room to house an additional 25 who would watch off a feed from the sanctuary.

“We will have a separate gathering that goes on at the same time for overflow purposes. That way we’ll be able to function,” Ham said.

The church typically has around 65-70 people attend Sunday services. In addition to the new format, there will be two Sunday services, at 9:30 a.m. and at 11 a.m., which will accommodate as many as 100 people.

In anticipation of the cap of 10 being soon required rather than recommended, Ham said the church has “a plan where we will go to a home church model. We will have a prerecorded sermon and meet with small groups in their houses.” The recording would be on DVD.

Churches also are taking a range of approaches for various mid-week activities, such as Bible studies, youth groups and small gatherings.

Some are suspending the activities altogether, some, if they don’t exceed the gathering limit, are continuing. And others are leaving the meeting of small groups to the discretion of the group leaders.

“We have Celebrate Recovery that meets at our downtown campus,” Hefner said. “They’re going to continue to meet,” because the group is under the 25-person limit.

With the caps limiting fellowship — an important aspect of church gatherings — the various congregations also are finding creative ways to stay in community and connected. Binder said one of First Baptist’s pastors, Matt Carpenter, is beginning a weekly blog.

Duncan said for older congregants or those at high risk of contracting coronavirus, his church is offering help in getting groceries or other supplies.

“We told them if they need younger people to do their shopping so they don’t have to go into town (we would help),” he said, adding, “We would do that for anybody, not just people in our congregation.”

Hefner said he had put together a daily devotional to go along with the church’s focus of study and are “right in the middle of that right now.” The devotional has proved beneficial as the church changed the way it operates amid the coronavirus outbreak.

"We told them if they need younger people to do their shopping so they don't have to go into town (we would help). We would do that for anybody, not just people in our congregation."

— Bud Duncan, elder at Imbler Christian Church, on help older or at-risk individuals during the outbreak

“People are engaging that way,” Hefner said of using the daily devotional. “We’re fueling people’s devotional time, that time they spend with Jesus on their own.”

Goss said the Nazarene Church will be “sending out Bible study material and devotional material,” and the church body is splitting up phone lists for people to remain in contact. Other congregations using email and social media to maintain a sense of connection during this time of “social distancing.”

The goal, Goss said, is “to still keep people in community, but obviously not as much face-to-face. We’re not going to stop anyone from getting together, but we’re going to utilize technology.”

This year, Easter is on April 12, and as the day approaches, believers are offering up hope and prayers they will be able to celebrate the resurrection of Jesus Christ together.

Faith Center was planning to meet on Easter at McKenzie Theatre on the Eastern Oregon University campus, which Hefner said the church did a year ago and drew about 800 people.

He said it’s unlikely the service at McKenzie will happen this year, though it hasn’t been taken off the table.

"That is still being developed, but we are planning to celebrate the resurrection."

Ham said in Union, the leaders are “hopeful and prayerful we’ll be able to do our Easter services at least in this restricted sense.”

Churches will have to wait — in the region and nation — before setting their Easter plans.

“That is still being developed,” said Binder, of La Grande’s First Baptist, “but we are planning to celebrate the resurrection.”

Get up-to-the-minute news sent straight to your device.

Did you like what you just read? Consider subscribing

Receive our top stories in your inbox each morning.

Check your email for details.

Submitting this form below will send a message to your email with a link to change your password.

An email message containing instructions on how to reset your password has been sent to the e-mail address listed on your account.

Your purchase was successful, and you are now logged in.

A receipt was sent to your email.