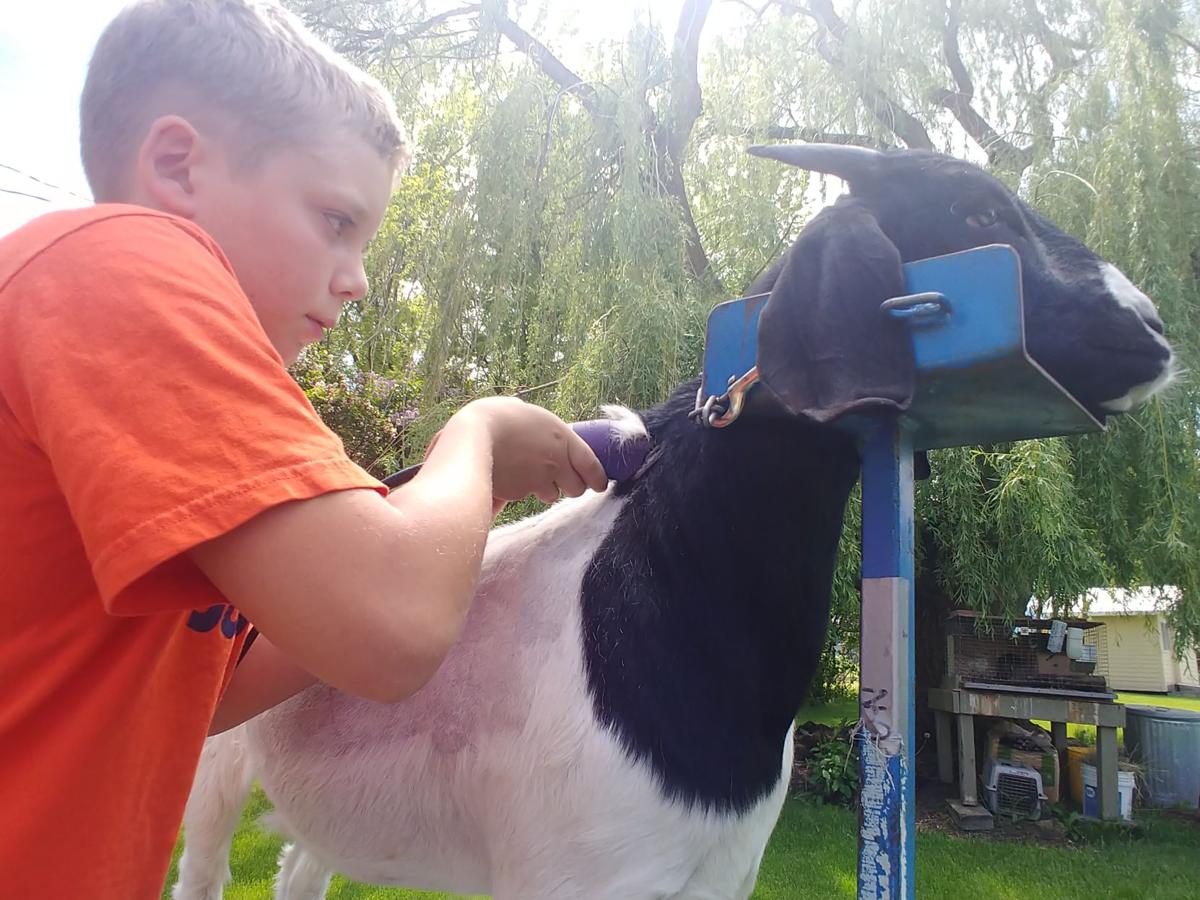 Ben Herron, 10, of Imbler, shaves the neck of his goat, Jimmy, in preparation for the Eastern Oregon Livestock Show’s Jr. Market Auction, which this year will be virtual due to the coronavirus restrictions. 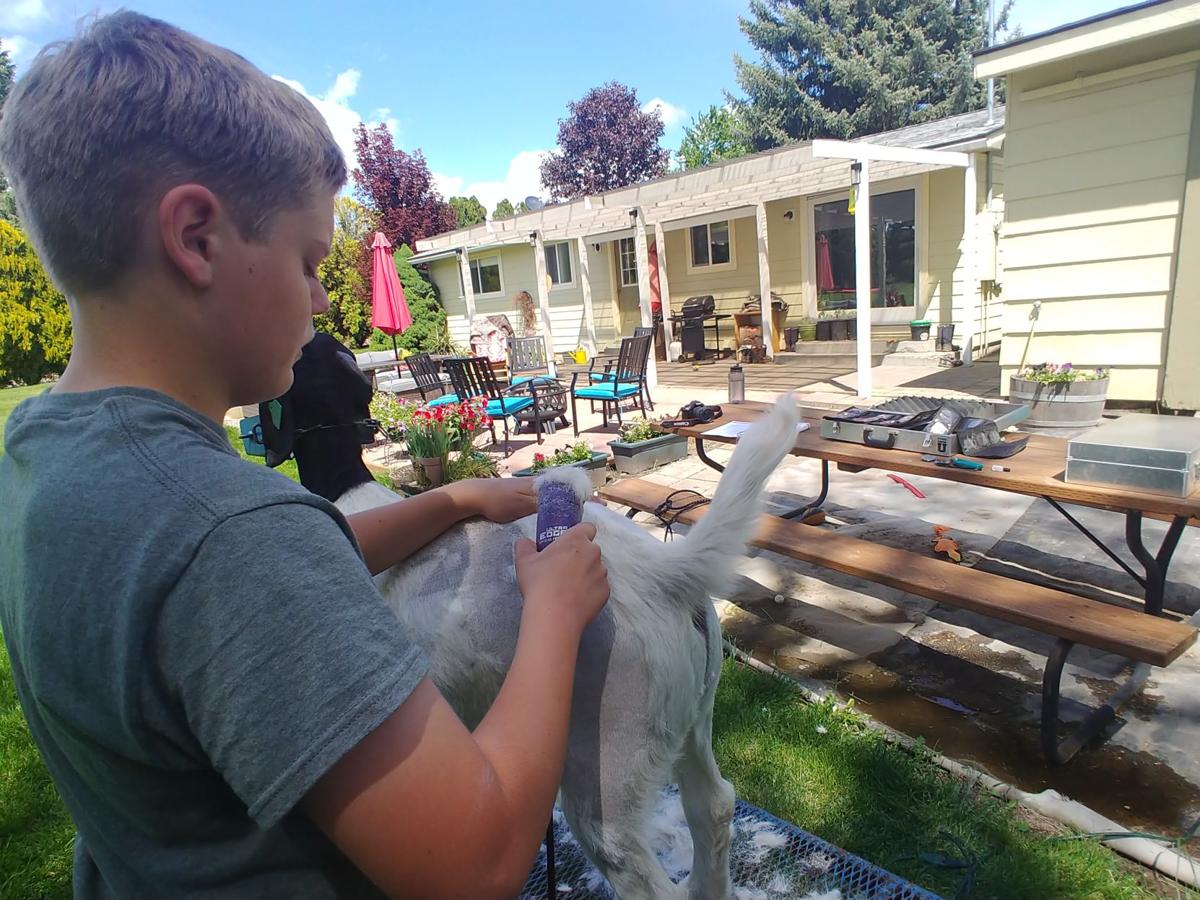 Gabe Herron, 12, trims the back of Jimmy, his brother’s goat, Tuesday afternoon at the family’s home in Imbler. 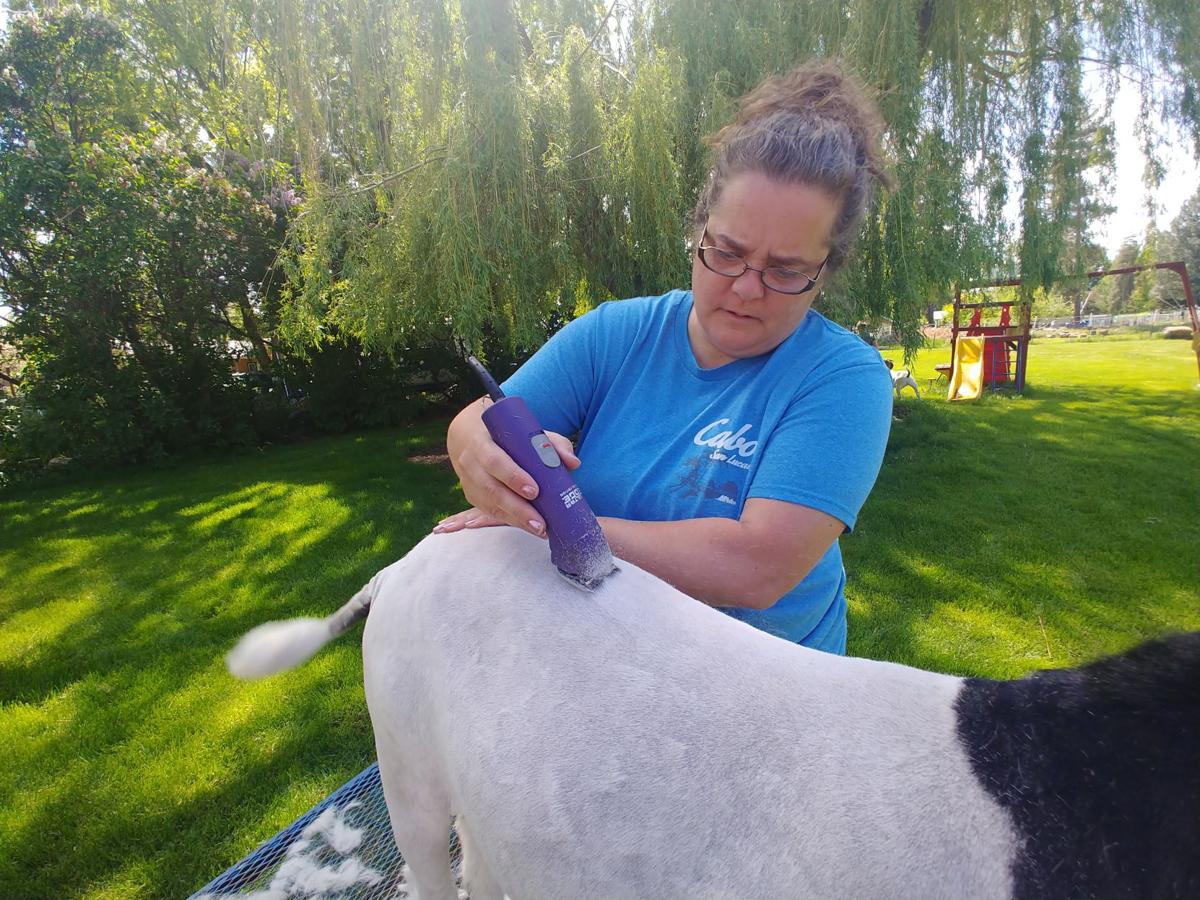 Amy Herron does touch-up work on Jimmy the goat as she helps her sons prepare for the Eastern Oregon Livestock Show’s auction, which will be virtual this year for the first time.

Ben Herron, 10, of Imbler, shaves the neck of his goat, Jimmy, in preparation for the Eastern Oregon Livestock Show’s Jr. Market Auction, which this year will be virtual due to the coronavirus restrictions.

Gabe Herron, 12, trims the back of Jimmy, his brother’s goat, Tuesday afternoon at the family’s home in Imbler.

Amy Herron does touch-up work on Jimmy the goat as she helps her sons prepare for the Eastern Oregon Livestock Show’s auction, which will be virtual this year for the first time.

LA GRANDE — With the Eastern Oregon Livestock Show canceled for the first time ever, the event’s Jr. Market Auction is going digital.

The 4-H sale will take place June 13, and the company Virtual Stockshow will be providing the platform for the nearly 250 entries that buyers will be able to bid on.

“There wasn’t any other option but to go virtual,” Union County 4-H extension agent Carole Smith said, noting 4-H remains under closure orders because it is part of the university system.

Rather than showing their animals to judges and, later, to prospective buyers in person at the livestock show, everything for this year’s auction will be uploaded through links on the Oregon State University extension office’s website. That includes the 248 show animal entries for Union County youth and buyers, down from an average of about 400 in recent years.

Youth looking to sell their market animals — hogs, goats, lambs and steers — are in the final stages of preparing them for sale. Starting Monday, the 4Hers can begin filming their official 90-second videos showing the animals and then June 7-8 they can upload the videos. Sample videos on the website show contestants walking their animals. Horse exhibitors will be able to do up to two 90-second videos for their pattern, according to the extension office website.

Judges then will view and rank the animals June 11-12 for the sale at 9 a.m. June 13. Each animal will be up for auction for 90 seconds, Smith said.

Smith said linking up with Virtual Stockshow was a major plus.

“We were going to make it up ourselves,” she said. “This was a good option to go with.”

Preparing for the sale this year posed unique challenges. Last year, Amy Herron’s middle son, Gabe, showed a goat in 4-H for the first time. This year, her youngest, Ben, also has a goat he is selling.

Earlier this week, the Herrons, from Imbler, set up to shave their Boer goats — 12-year-old Gabe’s goat is named Timmy, while 10-year-old Ben has Jimmy. Amy said last year, they learned in person how to trim the animal when Gabe prepped to show his goat for the first time.

But with the social distancing measures, they spent a lot of time watching videos online for refreshers on what the show animals needed to look like.

“(Last year) we had people actually able to help us through the process. They could come and show us what we needed to do,” Herron said. “Not having people be able to come and show us has been a big difference this time. This year I have to try to remember what we did last year, and like I said we’ve watched a lot of videos, made a lot of phone calls, emailed, texted a lot of people (asking), ‘How do I do this again?’”

Herron trimmed the first goat, Timmy, herself Monday, then on Tuesday showed her sons what she did while they took turns shaving a side of the second animal, Jimmy. She also took care of the trouble areas such as the legs — the animal’s “socks” are to be left untrimmed, she said — tail, neck and face.

“You leave from their ankles and knees down basically, and then you’re supposed to leave that flag on their tail. That’s what all the videos have told us,” Herron said.

The family said Timmy had a tough go Monday, so Tuesday they kept him nearby while Jimmy went under the shears.

“This goat was freaking out,” Ben Herron said. “That one was, too.”

It worked out, though, as the animal rarely flinched during the hour-plus long process.

“Yeah, someone who knows what they’re doing could probably do it faster,” Amy Herron said with a laugh.

“I actually like this,” he said while he worked on his goat’s right side. “This is fun. You’re getting a haircut, bro.”

The 10-year-old spent the latter part of the process while his brother took a turn and his mom did touch-up work holding the goat in the instances it did get jumpy.

“It was interesting,” Ben said at the conclusion of the trim. “It was weird, I’m not used to cutting hair. It was kind of fun.”

All that remains is cleaning up the animals, weighing, filming and sending in the details.

Amy Herron said both animals are about 85 pounds, and by the time of the sale “should be about perfect.” Goats must weigh in between 75-130 pounds.

“It’s stressful, trying to read through everything and make sure you don’t miss something,” she said. We’ve watched so many videos.”

She commended her sons for their work in taking care of the animals even during the unusual lead-up to an even more unusual sale.

“It’s fun, but it is stressful,” she said. “There were times this year when I was thinking why did we do this? The guys have done a good job.”

Buyers — who Friday will be able to register on the same site — will be able to see the orders of the entries so they can jump on to bid rather than wait through the entire auction.

“You can kind of know what time of day kids will be showing,” Smith said.

Smith also said buyers will be able to give “add-ons” — extra money outside of the sale — but they don’t have to wait until auction day.

“That option can be done ahead of the auction,” she said.

She also spoke with optimism on how she believes the sale will go, noting that even during an unprecedented time and downturn, businesses want to back the youth of the community.

“I think it’s going to go well,” Smith said. “All of us on the auction committee, the chair sub-committee, they are also getting calls. People want to know how to support kids. People are worrying about making sure the kids are supported.”