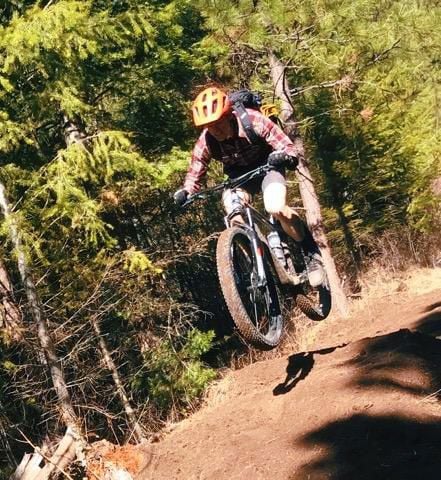 Sean Lerner rides one of the trails at Mount Emily Recreation Area this spring. Lerner is one of the Blue Mountain Singletrack Club members who has coordinated a May Challenge at the recreation area near La Grande that has drawn multiple cyclists. 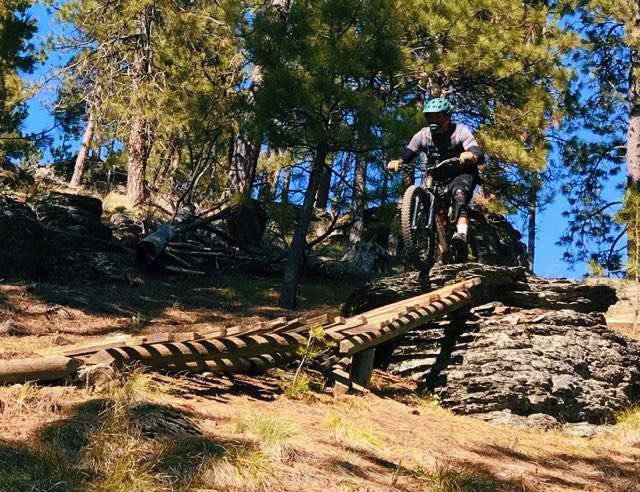 Dave Larman rides one of the trails at Mount Emily Recreation Area this spring. Blue Mountain Singletrack Club members have coordinated a May Challenge at MERA that is encouraging people to ride and also providing a way to race while practicing social distancing.

Sean Lerner rides one of the trails at Mount Emily Recreation Area this spring. Lerner is one of the Blue Mountain Singletrack Club members who has coordinated a May Challenge at the recreation area near La Grande that has drawn multiple cyclists.

Dave Larman rides one of the trails at Mount Emily Recreation Area this spring. Blue Mountain Singletrack Club members have coordinated a May Challenge at MERA that is encouraging people to ride and also providing a way to race while practicing social distancing.

LA GRANDE — When the coronavirus pandemic led to the cancellation of race after race that cyclists Elijah Romer and Sean Lerner had planned to enter, the La Grande duo decided to improvise.

What resulted is a mountain biking challenge in the Mount Emily Recreation Area near La Grande that is gaining popularity and allowing anyone interested to participate in socially distanced racing.

“We and a couple other people in the (Blue Mountain Singletrack Club) had been planning to go to some of Oregon’s mountain bike races,” Lerner said, noting the plan was to do about a race a month. “We had been training all winter. We were bummed when that got canceled. This is the time of year when we would normally start doing social group rides. We can’t do that either.”

The two devised a course out of three conjoined trails at the recreation area people could ride on and — using the phone app Strava, which uses GPS to track outdoor activity — time the results.

“We could do a virtual race,” Romer said. “Get people excited about riding and riding fast. We came up with the route — we set it up and I set up a club link on Strava.”

Romer said the Strava group — which had three people in it at the beginning of the month when they set up the May Challenge — is up to 41 members, several of whom have attempted the course.

“So far it’s been a pretty big hit I would say,” Lerner said.

Romer, who recently moved back to La Grande, and Lerner started leading a free cycling course at the beginning of the year at Mountain Works Bike Shop.

“Everybody is getting fit. Sean and I were trying to get people into racing,” Romer said.

The first race of the year was going to be in Echo, but organizers canceled the event about three weeks before the start because of the coronavirus.

“Sean and I had a full race calendar this year,” Romer said. “One by one they started getting canceled. We both decided this is not going to magically go away (but) we don’t want to quit riding.”

The MERA course is a combination of three trails — totaling just more than 4 miles — that Romer said gives riders an equal amount of uphill and downhill riding: Whoopsy Do, Bamm Bamm and Lower Hot Shot.

The course, while a challenge, is an opportunity for more than just the expert mountain bikers.

“We wanted it to be as inclusive as possible,” Romer said.

It also is providing an opportunity, he added, to highlight Bamm Bamm, which he said was recently opened.

Through word of mouth and the Strava app, Romer invited riders to take on the courses at MERA. The ability to stay in the community even in socially distanced times, while a challenge, is a positive for the group, according to Lerner.

“One of the biggest benefits is even though it’s a solo challenge, people are still commenting on each other’s rides and contributing to the sense of community that wouldn’t happen right now,” he said.

As of Thursday night, more than 20 riders logged 39 attempts on the course, according to Strava.

“Some have had two, three, four (personal records),” Romer said. “It’s kind of cool. In many ways I’m seeing more activity as a cycling community than I did pre-corona.”

Romer also pointed to community building as one of the pluses of the challenge.

“Community development would be the biggest one I see,” he said. “Being part of that club, you can see rides that other people are doing. You can get trail condition updates from people’s rides.”

He also said people are connecting through the app.

“We’re communicating with folks I haven’t even met in person,” he said, adding although he has reached out to bring members of the Blue Mountain Singletrack Club into the Strava group, about half of those in the newer group are not BMSTC members.

It also adds accountability, he said: “Like anything in life, when you see other people are out riding it pushes you off the couch.”

For the sports fan missing out this spring, too, it fills that need.

“I’m not a sports guy, but a lot of the people here are, and you could tell that people were getting into the competition aspect of it,” Romer said.

The competitive side — and self-improvement — are aspects Lerner pointed to, as well.

“A lot of people are going back and doing it multiple times trying to improve their times or maybe beat their friends,” he said. “I was talking to one of the club members, he set a personal goal of wanting to do it in under 40 minutes. I think he broke that goal this week.”

He plans to carry it into June, as well, but that month’s challenge will have a twist.

“The challenge next month will have a new route every week,” Romer said.