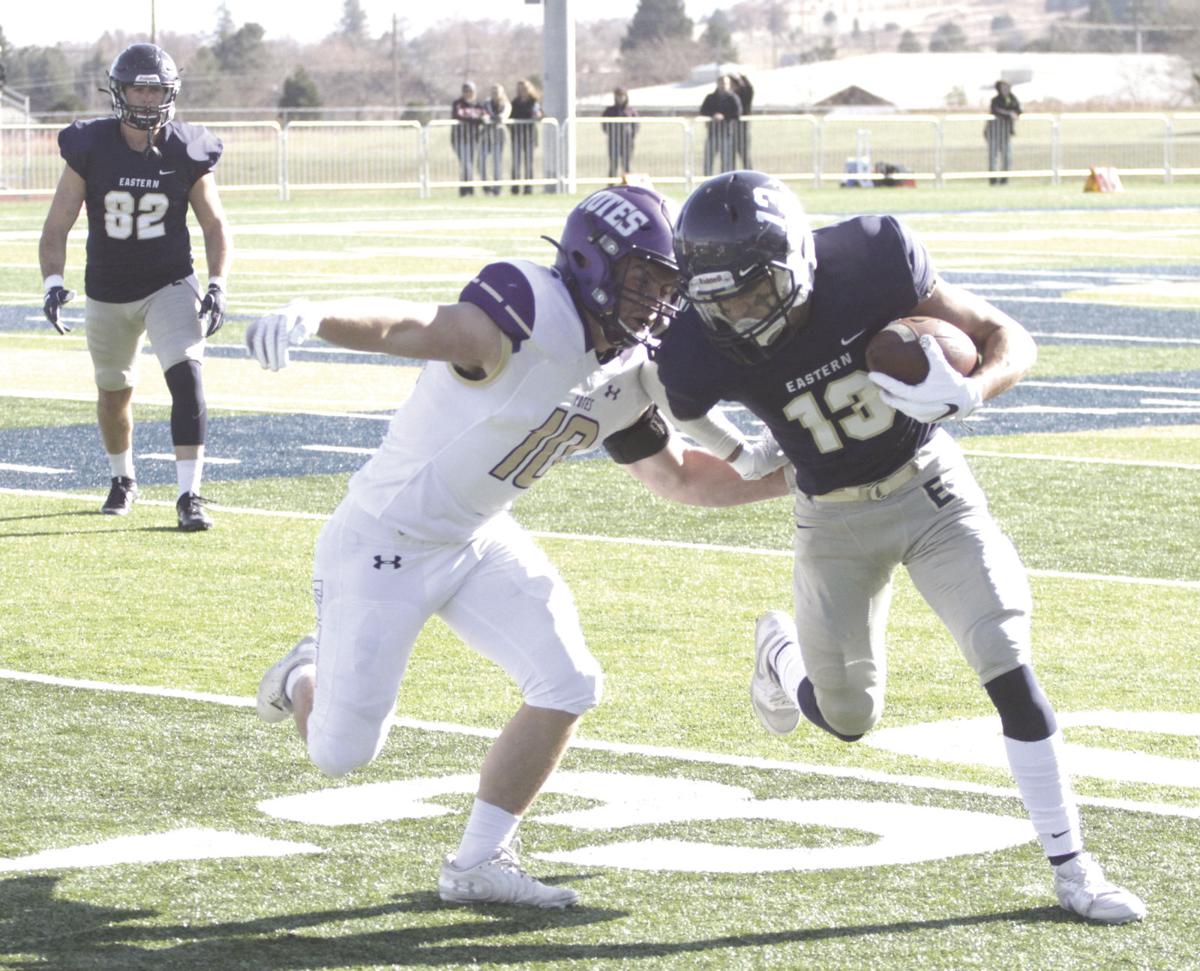 Eastern Oregon University receiver Josh Mendoza, right, tries to get around a College of Idaho defender during a game last season. The NAIA has put forward a proposal for the 2020 fall sports season that gives practice and game start dates, and possibly a shortened seasons for fall teams. 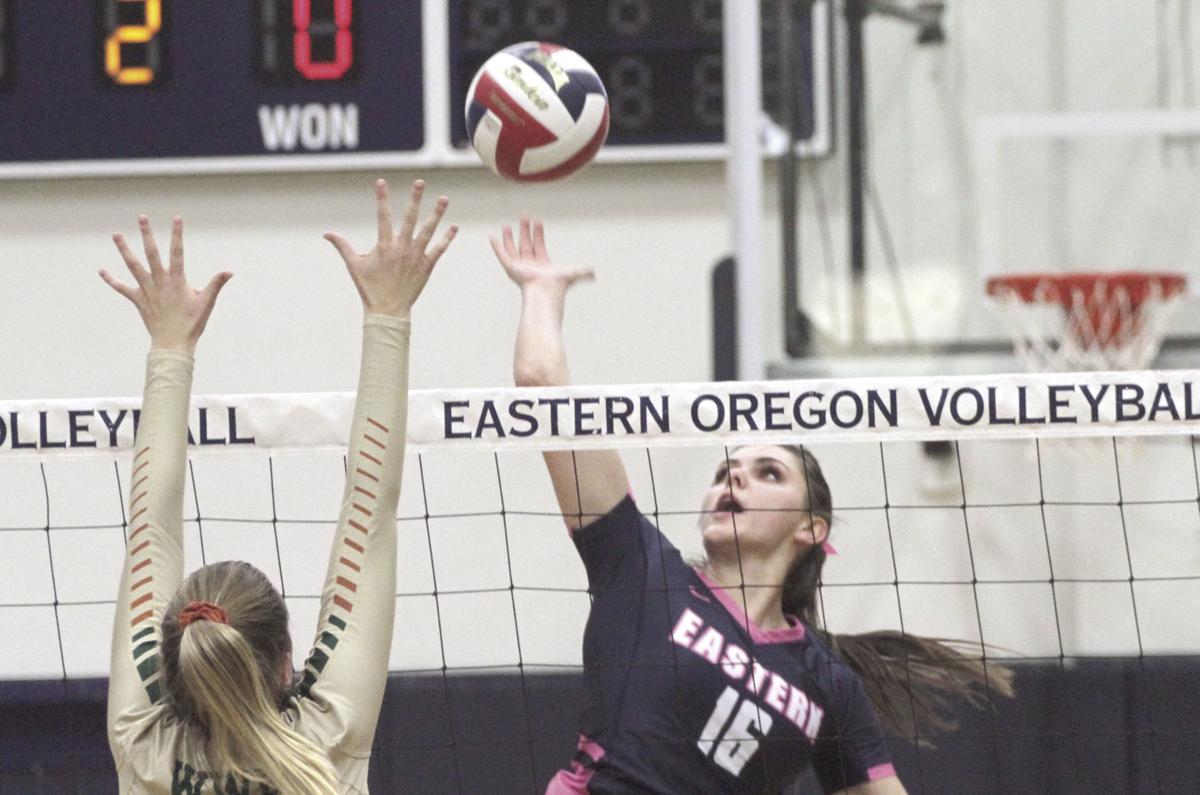 Eastern Oregon University volleyball player Jet Taylor, right, attempts a kill during a match against Walla Walla last season. The NAIA has put forward a proposal for the 2020 fall sports season that gives practice and game start dates, and possibly a shortened seasons for fall teams.

Eastern Oregon University receiver Josh Mendoza, right, tries to get around a College of Idaho defender during a game last season. The NAIA has put forward a proposal for the 2020 fall sports season that gives practice and game start dates, and possibly a shortened seasons for fall teams.

Eastern Oregon University volleyball player Jet Taylor, right, attempts a kill during a match against Walla Walla last season. The NAIA has put forward a proposal for the 2020 fall sports season that gives practice and game start dates, and possibly a shortened seasons for fall teams.

LA GRANDE — The National Association of Intercollegiate Athletics has outlined what the Fall 2020 sports season could look like.

The NAIA’s Council of Presidents last week approved recommendations for their collegiate sports, one that gives a tentative start date for matches, a practice plan and the number of games that a team could play.

All fall sports are still currently on the table, as is a postseason late in the fall. Under the plan, soccer, golf, volleyball and cross country would begin their seasons as early as Sept. 5, and football would start a week later. The timeframe would give football four weeks of practice from an Aug. 15 first-practice date, and the other sports three weeks.

The number of contests will be lessened, however. Teams can have a maximum total of nine football games, seven cross country meets, 14 soccer matches and 22 game days for volleyball.

A threshold system will trigger the start of each individual sport’s season.

“The threshold goal is for about half the participating institutions in each sport to receive clearance from local authorities to return to competition before the season can begin,” according to a letter from the NAIA announcing the plan.

The example stated in the letter notes there are 95 NAIA schools that have football. The NAIA would OK the start of the football season, then, when 47 of the schools can proceed with football, the letter states.

At Eastern Oregon University, there is a sense of cautious optimism among coaches in the reality that the NAIA is working out a plan to get the season started, even if it is shorter and starts a bit late.

“Obviously games are better than no games,” EOU women’s soccer head coach Jacob Plocher said. “I can’t complain too much in that regard.”

One coach who surely isn’t complaining about the proposed format is cross county head coach Ben Welch. His teams traditionally have not competed in even the seven races annually that are allowed as part of the adjusted schedule, and weren’t going to start practice until Aug. 31.

“The max has typically been eight, but we normally do four and occasionally five,” Welch said. “They dropped it back to seven but that doesn’t affect us.”

Women’s soccer and volleyball will be harder hit, and perhaps volleyball the worst of the two. Volleyball coach Kaki McLean-Morehead typically takes her teams to two or three preseason tournaments. But with 22 game dates and now 12 volleyball programs in the Cascade Collegiate Conference with Lewis-Clark State College joining this fall, those 22 days will be filled with 22 CCC battles.

Both teams do have two scrimmage/exhibition dates they could use. Plocher figures to use his, but McLean-Morehead said the volleyball team won’t.

Football also will have some rescheduling to do. EOU’s first two games of the season were before that cutoff date of Sept. 12, and that day actually is slated as a bye on the current schedule.

Interactions with the teams are another issue coaches are facing. When the NAIA announced this plan, it also forbade practices until the first day of practice in mid-August, though conditioning sessions still are allowed.

Plocher said for the soccer team, that could mean having conditioning and then leaving the players to have an “open field” session afterward.

“We (also) have summer packets they are encouraged to do anyway,” he said.

How McLean-Morehead’s team comes in Aug. 15 may depend on how much individual or even group work they are able to do at home, and that depends on a player’s location. She noted a trio of players in Idaho have been able to be in open gyms already, but players such as her starting setter, Madison Pilon, who is from Washington, haven’t.

She hoped to have a weeklong session in June with the team, but isn’t too concerned about not being able to.

“Not having that is not necessarily a huge hindrance, but it would have been a leg up, especially for the newer kids,” McLean-Morehead said.

Welch traditionally gives his incoming cross country athletes a 12-week workout plan for the summer in the lead-up to fall practice and did so again this year. His worry isn’t so much about the process leading up to the start of practice and the season.

It’s if there will be enough teams for a season.

“That’s a bigger concern than the other changes, to be honest. There are 200 schools roughly in the NAIA that do cross country,” he said. “We need 100 of them to go forward (with the season).”

He also is concerned about where Oregon could be come August when the season would begin and if the team can indeed proceed.

McLean-Morehead and Plocher both were positive about the changes of the season kicking off.

“Like anything, we don’t know. It’s wait and see,” Plocher said, “(but) I feel pretty confident we’ll have a season.”