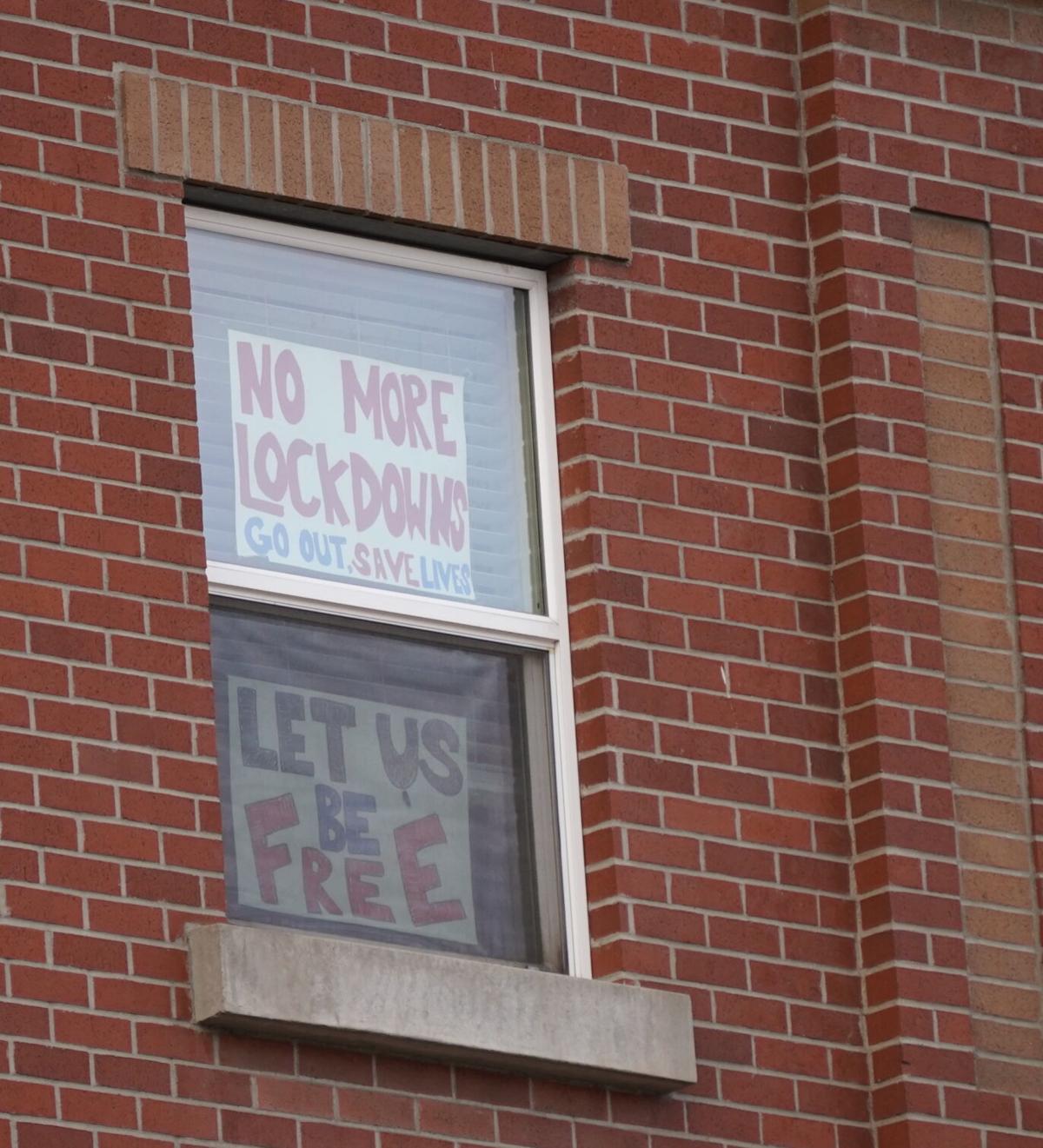 A sign in a window overlooking Adams Avenue in downtown La Grande on Wednesday, Jan. 20, 2021, calls for an end to COVID-19 “lockdowns.” Public health restrictions aimed at staunching the spread of the disease have forced some businesses to shut their doors and limited social gatherings for months in Union County. 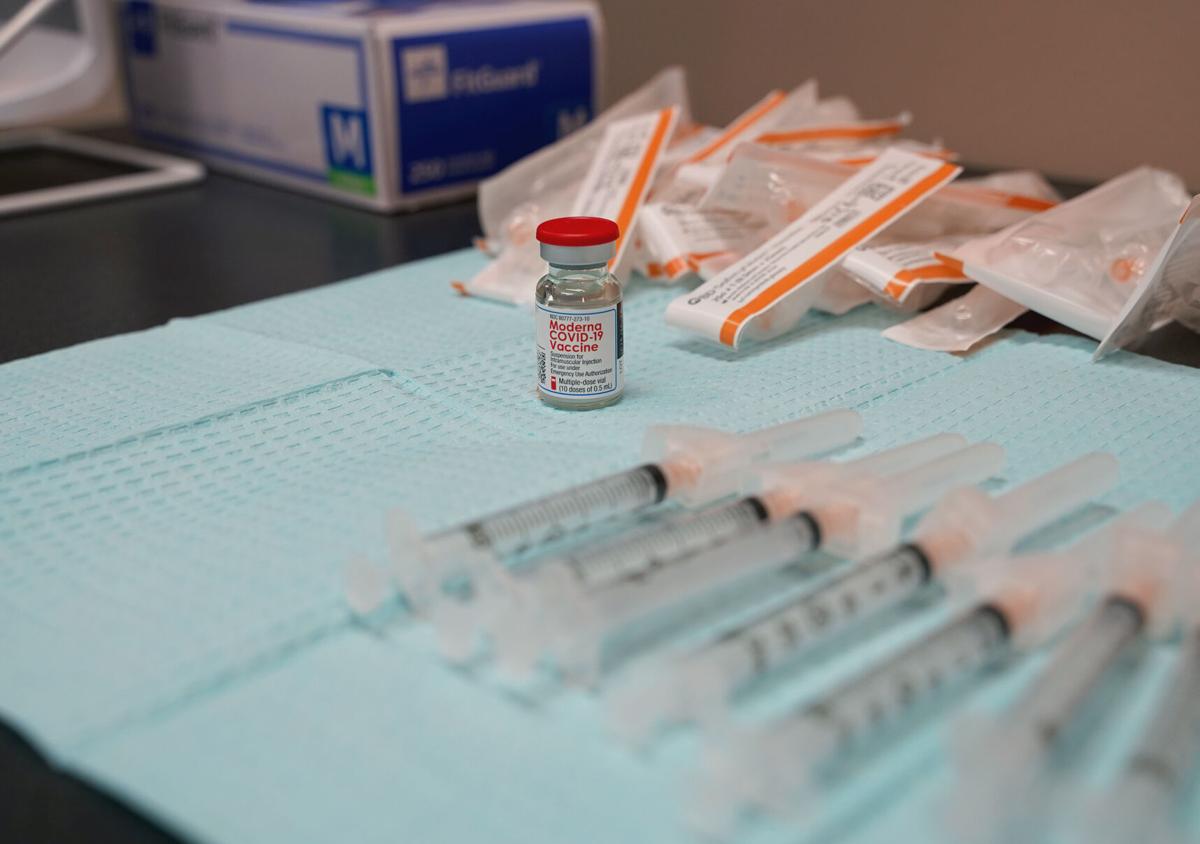 Doses of the Moderna COVID-19 vaccine await use at Grande Ronde Hospital in La Grande on Dec. 23, 2020. Vaccination is open in Oregon to all Phase 1A groups as well as Phase 1B of Group 1.

A sign in a window overlooking Adams Avenue in downtown La Grande on Wednesday, Jan. 20, 2021, calls for an end to COVID-19 “lockdowns.” Public health restrictions aimed at staunching the spread of the disease have forced some businesses to shut their doors and limited social gatherings for months in Union County.

Doses of the Moderna COVID-19 vaccine await use at Grande Ronde Hospital in La Grande on Dec. 23, 2020. Vaccination is open in Oregon to all Phase 1A groups as well as Phase 1B of Group 1.

LA GRANDE — Misinformation surrounding the COVID-19 pandemic has proven persistent, even a year after the first case of the disease was documented in the United States. Despite widespread and consistent messaging from public health experts, falsehoods about the danger and severity of COVID-19 and measures aimed at protecting against it have become commonplace.

Some of that misinformation has been spread in letters to the editor or in the comments section of The Observer’s Facebook page. This article will address some of those claims and provide the factual information from reliable sources.

A common misconception is comparing COVID-19 to the seasonal flu. Other similar sympathies include beliefs that nearly everyone who catches COVID-19 recovers or that COVID-19 death rates are negligible, near zero percent.

Some people experience only mild symptoms from COVID-19, which often mirror those from the flu, including fever, chills, muscle ache and fatigue. Others may experience no symptoms at all and risk spreading COVID-19 unknowingly.

However, COVID-19 is far deadlier than the flu.

By comparison, roughly 24 million confirmed cases of COVID-19 have resulted in more than 400,000 deaths in the U.S. in a single year of the pandemic. That comes to a death rate of roughly 1.67% — nearly 17 times higher than the average death rate of the flu during the past three years.

The national death rate is closely mirrored in Union County, where 1,114 cases of COVID-19 had resulted in 16 deaths as of Monday, Jan. 18, according to the Center for Human Development. That puts the local death rate at just over 1.4%. At that rate, more than one in 70 Union County residents who tested positive for COVID-19 died as a result.

While COVID-19 may feel like the flu to some individuals who contract it, the effects of the illnesses are dangerously different. As of Tuesday, Jan. 19, COVID-19 had killed 18,755 Americans in just the preceding seven days, according to the CDC.

The overwhelming majority of deaths from COVID-19 occur in elderly populations, for whom the disease is particularly deadly. According to the Oregon Health Authority, roughly one in five people older than 80 who contracted COVID-19 in Oregon died as a result, and deaths of those 60 or older accounted for 1,642 of Oregon’s 1,808 deaths, or 90.8%, as of Tuesday, Jan. 19.

This has led to an apparent misconception that COVID-19 affects only the elderly and therefore younger and healthier populations do not need to take the virus as seriously.

However, the same populations that account for the majority of COVID-19 deaths account for a minor share of the cases. Based on tracking data from the OHA, as of Jan. 19, those age 60 or older had tallied only 17.3% of Oregon’s positive COVID-19 cases, while those ages 10 to 39 had tallied 49.3%.

There are many variations on this misconception, including sentiments that only “sealed” or high-quality masks can prevent the spread of COVID-19. Many seem to stem from the fact that the COVID-19 particle is extremely small and can pass through cloth masks or that gaps between a mask and a person’s face can allow for the passage of air.

Dr. Stephen Hunsaker, a hospitalist with Grande Ronde Hospital who grew up in Baker City, explained the function of masks in a recent interview on EOAlive TV:

“The mask doesn’t catch coronavirus,” Hunsaker explained, “but it does catch those little tiny water droplets you exhale, and those water droplets have the majority of the virus that you’re exhaling. So, in that way, the mask actually does help. It’s not a hundred percent, but it’s certainly better than not having anything.”

Additionally, study after study from numerous institutions — the University of California San Fransisco, the Centers for Disease Control and Prevention, The Lancet medical journal and the Proceedings of the National Academy of Sciences — have indicated consistent mask-wearing drives down COVID-19 transmission rates. And the Institute for Health Metrics and Evaluation modeled a best-case scenario for the future of the pandemic in which universal mask-wearing smothers the spread of the disease.

Masks have been repeatedly proven effective in curtailing the spread of COVID-19.

Misinformation around the two COVID-19 vaccines authorized for emergency use in the U.S. has exploded since they were rolled out in December. Some common misconceptions about vaccines claim that they are untested or even dangerous.

The vaccines underwent extensive testing before the U.S. Food and Drug Administration authorized them for emergency use. The Pfizer-BioNTech vaccine was tested on 44,000 people of varying age and ethnicity, and the Moderna vaccine was tested on 30,400 people, many of whom reportedly worked in occupations that put them at high risk of infection, according to FDA memorandums on the review of the vaccines.

Through testing on those tens of thousands of people, both vaccines were shown to prevent serious symptoms of COVID-19. Common side effects of the vaccine included pain at the injection site, muscle and joint pain and chills.

Both vaccines were found to be both safe and effective.

While some people have had allergic reactions to the vaccines, including one person at Wallowa Memorial Hospital in Enterprise who has since recovered, recipients are monitored after injection for signs of anaphylaxis, and reactions have proved to be exceedingly rare.