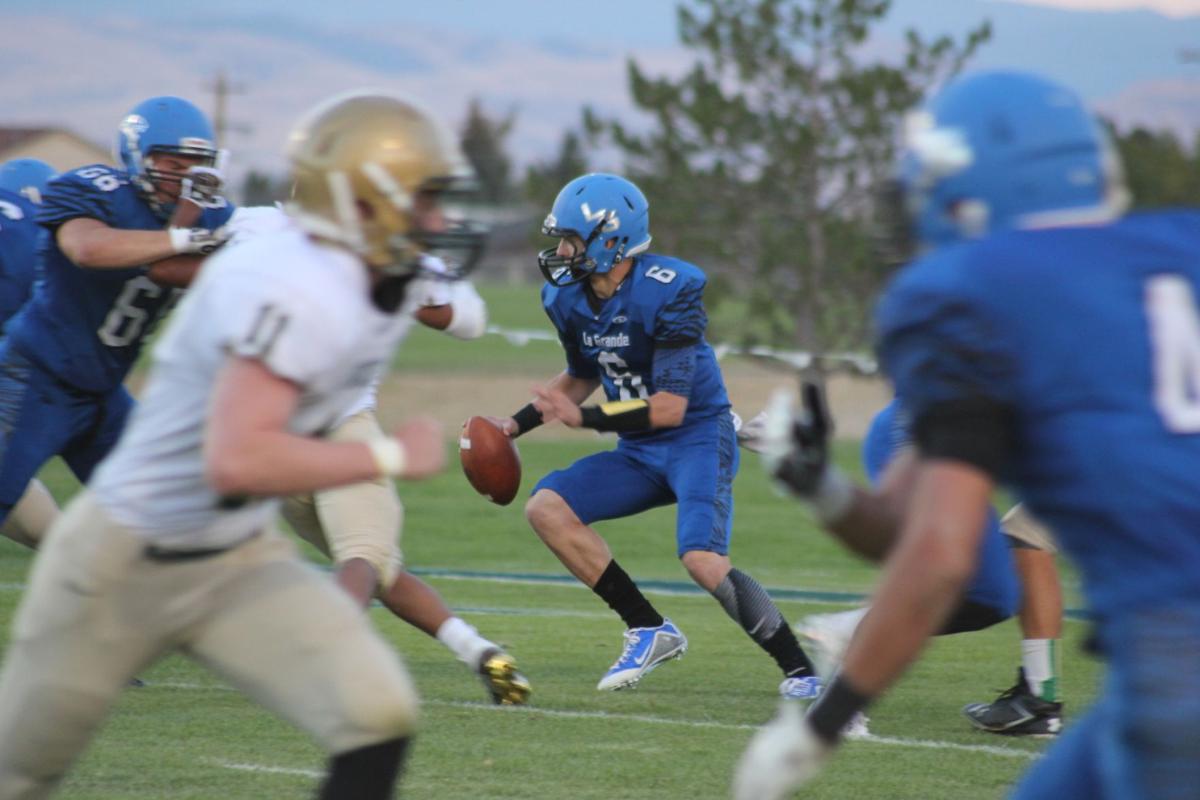 The La Grande High School football team takes on Pendleton in this photo from the 2016 season. Schools in Eastern Oregon could move to playing only regional contests for 2020-21 when sports seasons begin. 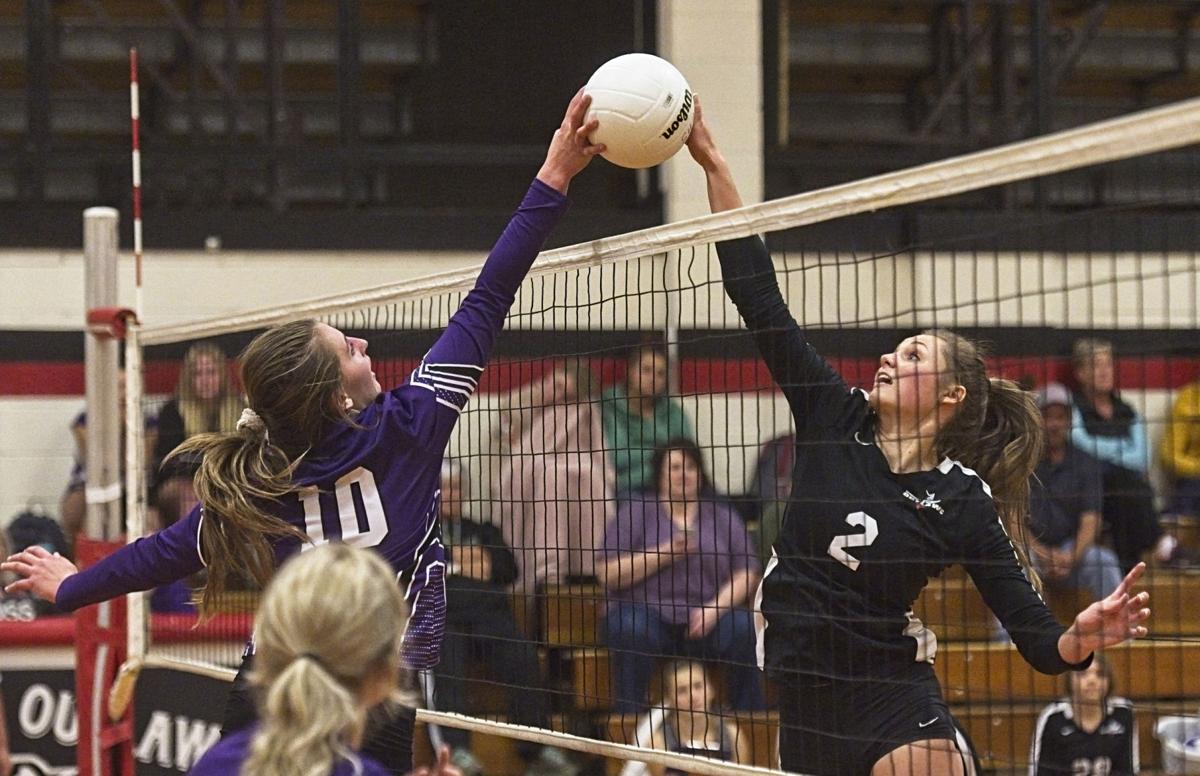 Elgin’s Kaelin Evans, left, and Enterprises’s Jada Gray meet at the net in this September 2019 high school volleyball match. Regional and cross-classification contests may be the norm for this sports season due to COVID-19 restrictions that would impose hurdles to team transportation.

The La Grande High School football team takes on Pendleton in this photo from the 2016 season. Schools in Eastern Oregon could move to playing only regional contests for 2020-21 when sports seasons begin.

Elgin’s Kaelin Evans, left, and Enterprises’s Jada Gray meet at the net in this September 2019 high school volleyball match. Regional and cross-classification contests may be the norm for this sports season due to COVID-19 restrictions that would impose hurdles to team transportation.

If high schools in Eastern Oregon resume competitive events in 2021, the teams might seek to limit their opponents to relatively nearby schools to reduce travel and make it easier to comply with COVID-19 precautions.

This regional approach would prioritize distance between schools rather than whether they’re in the same district or league.

Athletic directors from regional high schools, while in the midst of the series of three “mini-sessions” this fall that allow teams to have practices, also are discussing a regional approach to scheduling for when regular contests begin.

“We believe it is prudent to restrict our travel to schools closer to home, and these schools offer us competitive games for our players,” said Beccy Nordvedt, athletic director at Enterprise High School. “Decreasing the risk of exposures contributes to being able to not only continue to practice and compete, but also helps to keep our doors open for students to attend school in person.”

On Oct. 15, the Oregon School Activities Association, which sanctions high school sports in the state, issued a memo to schools covering a wide range of topics. The memo states that OSAA’s “Executive Board has determined that schools will not be required to participate in their assigned leagues/special districts for the 2020-21 school year.”

The memo continues: “While current league/special district alignments may continue to work for some, many schools are forecasting significant travel and transportation issues that will impact current structures. Availability of buses and bus drivers, increased costs due to passenger limits and transportation guidelines, and concerns for lengthy trips in an enclosed bus environment were among the issues raised by the delegates. Schools will continue to determine their own schedules which will likely include more cross-classification contests. Both governing bodies were resolute in their belief that all schools in the state, regardless of classification, will need to work collaboratively to ensure that schools are able to fill their schedules.”

“We’ve been meeting as Eastern Oregon ADs and we’ve just been keeping in touch with one another and working our way through this,” Gonzales said. “We are going to wait to probably finalize a lot of that til early December.”

In a year that has been far from normal for high school athletics due to the pandemic, with most state basketball tournaments and the entire spring sports schedule canceled, athletic directors in Eastern Oregon are focusing on getting students back to competition safely

“We want our kids to play, and we will do whatever it takes for them to play,” La Grande Athletic Director Darren Goodman said. “If we have to stay regionalized, then we will stay regionalized.”

With the winter sports season scheduled to start Dec. 28, another topic that could pose a challenge is transportation.

“If we get to that point, the assumption would be that we would take district transportation so the kids are safe going from event to event,” Pendleton Athletic Director Mike Somnis said. “Being as far out as we are, having parents drive out to their games isn’t feasible and isn’t safe.”

For sports with larger numbers of players, schools will likely need to employ multiple buses for each trip.

“You got to have at least 3 feet (between students), which means that you could put one person per seat,” Gonzales said. “Then it becomes a monetary issue, if you are taking all 60 kids from the football team, then you’re taking three buses.”

As of now, the issue of scheduling games is moot for certain sports.

According to the memo, OSAA officials have talked regularly with the governor’s office and the OHA “regarding the timeline for possible reconsideration of these policies but thus far has received no indication of any pending reconsideration.”

Somnis, the Pendleton athletic director, said that prohibition is a concern.

“I think there is some worry, especially with cases around the state going up right now, and you just wonder if some of these restrictions will be lifted so that we can wrestle, that we can play basketball,” Somnis said. “There is some logical, realistic concern when you look at the metrics, and you look at the things that have to happen to get to that point.”

Another potential hurdle for the resumption of high school sports is the state rule prohibiting indoor competition, including basketball and volleyball, for high schools that have only online classes. That list includes many high schools in Eastern Oregon.

Indoor competition is allowed only for schools that have either a hybrid schedule, with students in classrooms some days, or a full in-person schedule.

As with the ban on full-contact sports, OSAA has not received a timeline from state officials about the possibility of the state reconsidering the indoor competition policy.

The OSAA’s current schedule plans for a one-week period, at the end of each sports season in 2021, that would allow for playoffs and, potentially, a state championship event.

Nordvedt, the Enterprise athletic director, said she believes it would be difficult to make that happen, since playoffs usually involve teams traveling from one part of the state to another. It’s not uncommon for teams from Eastern Oregon to travel to the Coast, and vice versa.

“It is hard for me to imagine that it will (happen in the normal way) due to both increased chances of exposure and spread of COVID, but also because across the state many schools have not been able to bring kids in to even practice at this point,” Nordvedt said.

But Goodman, the La Grande athletic director, remains optimistic that some type of playoff system is viable.

“This will hopefully include state championship-like events but depending on gathering restrictions, travel constraints and financial considerations for schools and the association, a traditional state championship event may not be possible in many activities,” the memo reads.

As with the scheduling for regular-season games, a regional approach might replace the normal playoff and state championship format, according to the memo.

This replacement system could include a schedule that allows schools from multiple classifications to compete for a state championship. That format is already used for certain sports, such as tennis, where players from 1A, 2A, 3A and 4A schools compete at the state tournament.

In the meantime, with schedules and seasons still in flux, athletic directors expressed gratitude for the patience of students, coaches and volunteers in an unprecedented year.

“We are in such a unique time and it’s a situation we’ve never been through before, as administrators, as coaches, as athletes, as a society,” Somnis said. “I would say that I think people are doing everything to give kids a good outlet, and give kids a good opportunity to do the best they can academically and athletically.”

The OSAA uses the system to determine playoff slots. The suspension covers rankings for the entire school year in all divisions.

The memo state schools will continue to determine their own schedules, which will likely include more cross-classification contests, including 1A schools competing with 2A and higher schools if both agree.

"A traditional state championship event may not be possible in many activities," the OSAA memo stated.

Playoffs and championships ("culminating events") may instead be regional, with options for schools to opt out or opt in, the memo said. A decision on what Season 2 (Dec. 28 to March 6), which includes boys and girls basketball, will be made on or before the OSAA’s Dec. 7 executive board meeting. The status of Season 3, Feb. 22 to May 1 (football, volleyball and cross-country) and Season 4, April 19 to June 26, (track and field, softball, baseball, golf) remain uncertain.

An inquiring professor wanted to know: What was Thanksgiving like during the 1918 Spanish flu?