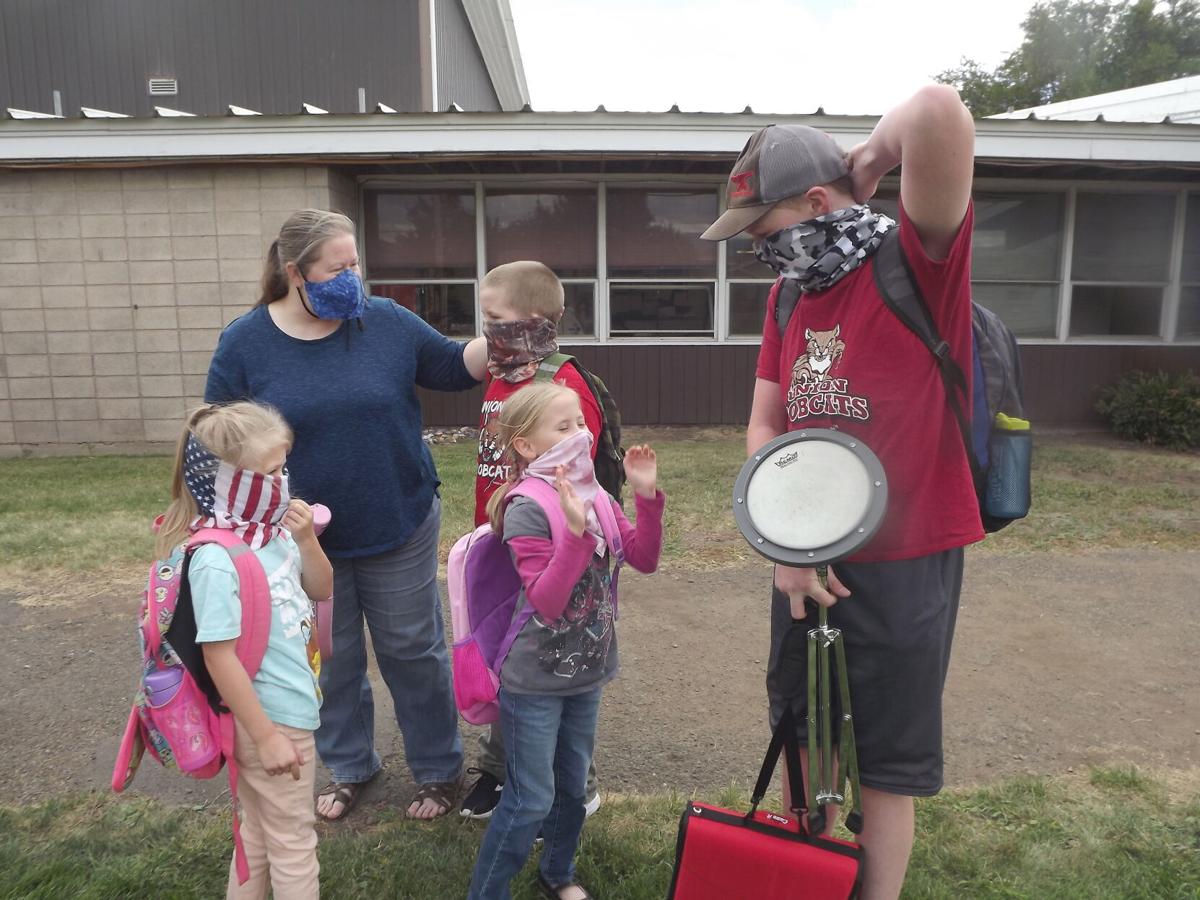 Amy McCants talks with her daughters Audra and Christy and son Caleb after school Monday, Aug. 31. Her son Wyatt stands at the right. Audra, Christy, Caleb and Wyatt are Union School District students. 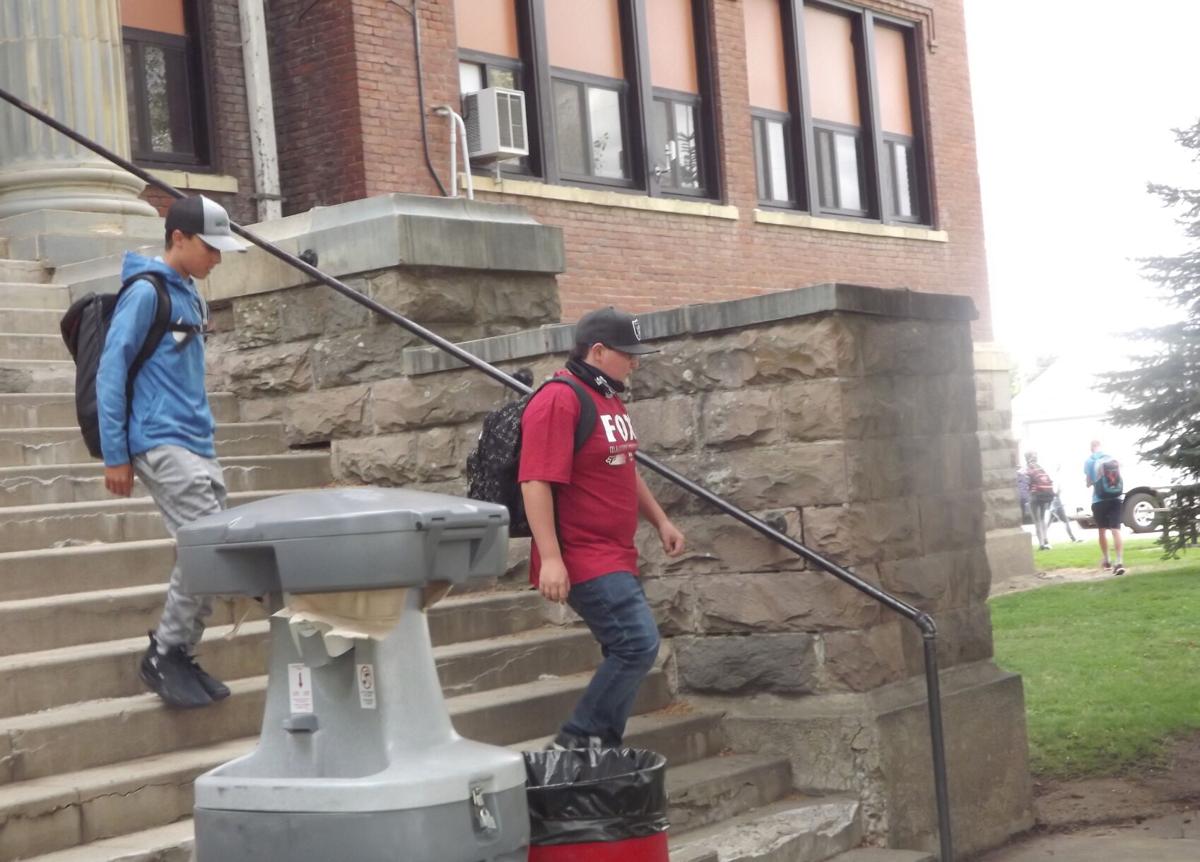 Amy McCants talks with her daughters Audra and Christy and son Caleb after school Monday, Aug. 31. Her son Wyatt stands at the right. Audra, Christy, Caleb and Wyatt are Union School District students.

UNION COUNTY — A sense of normalcy returned to many school districts in Union County Monday.

Students in the Cove, Imbler, Elgin and Union school districts came back to their schools to attend classes after an absence of almost six months due to the COVID-19 pandemic.

Many educators said students appeared excited to be back in their classrooms after taking classes exclusively online last spring.

“I couldn’t see their smiles because of their masks (that they wore to protect themselves from COVID-19) but I could see the smiles in their eyes,” said Imbler School District Superintendent Angie Lakey-Campbell.

Union High School teacher Greg Poor said when he asked his students if they were happy to be back at school, the answer across the board was an enthusiastic yes. Poor shared their sentiment, noting as an educator he much prefers providing instructions in person rather than online.

“You cannot build relationships online like you can in person,” Poor said.

Students delighted to be back in a brick-and-mortar school included Kaci Baxter, a Union High student. She said one reason she was happy to be back in school is because it is easier to communicate with her teachers in person. She noted, for example, she was able to get answers more quickly in person Monday than when classes were online.

Korbin Cochran, an eighth-grader at Union High School, said he and his classmates were glad to see each other again at school. He said many students kept in contact online after all schools closed in mid-March, but some students not as often.

“It was harder for those who do not have Wi-Fi at home,” Cochran said.

Wyatt McCants, a seventh-grader at Union High School, said Monday went quickly because it felt so good to be back in school.

“The time flew by. It was super exciting,” he said.

Jay Blackburn, a Spanish teacher at Cove and Union high schools, believes it is healthy psychologically for students to be in a classroom together rather than learning online.

“They were starving for interaction,” Blackburn said.

Some students discovered during their extended break they liked being at school more than they realized.

“I heard one student say, ‘I never thought I would say this, but I am glad to be back in school,’” Blackburn said.

Like students everywhere returning to their schools when state metrics allow it, those in Union County have to deal with new rules due to COVID-19. This includes social distancing mandates, entering and exiting buildings only from preassigned points, washing hands extensively and more.

Elgin School District Superintendent Dianne Greif said she is impressed by how maturely and intelligently students responded to protocols.

“The kids were asking a lot of questions they should be asking,” Greif said.

“I did not hear anyone complain,” he said.

“(The students) came in knowing they would have to follow protocols,” Miles said. “They adjusted their expectations and handled them well.”

Rules to deal with the spread of the coronavirus means Cove High School is offering fewer classes. Social distancing and limits on the size of the cohorts students are in restrict class sizes. This is not limiting the availability of core subjects but it is trimming the number of electives.

“It limits options,” Miles said, also noting some students are frustrated, “but they understand why they cannot get all the classes they want.”

When Lakey-Campbell reflected on her students’ return to school this week, an online talk with a student who had to be absent Tuesday because he was not feeling well came to mind. Playing hooky was the furthest thing from his mind.

“He was so upset,” the Imbler superintendent said, “because he could not get to school to see his friends.”

"I heard one student say, 'I never thought I would say this, but I am glad to be back in school.'" —Jay Blackburn, Spanish teacher at Cove and Union high schools