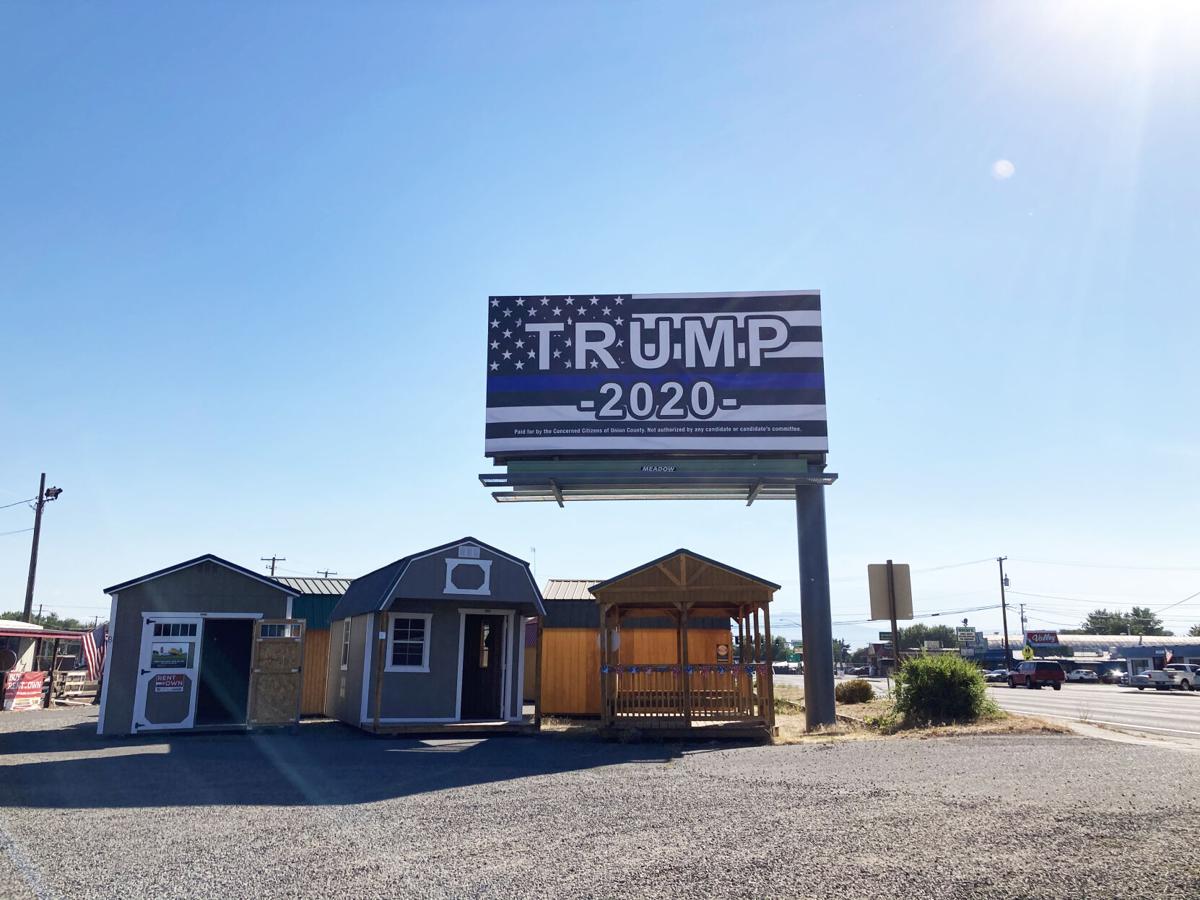 A billboard supporting the reelection of President Donald Trump faces eastbound traffic on Island Avenue. The Concerned Citizens of Union County, a new business with the purpose of funding the political billboard, purchased the display. 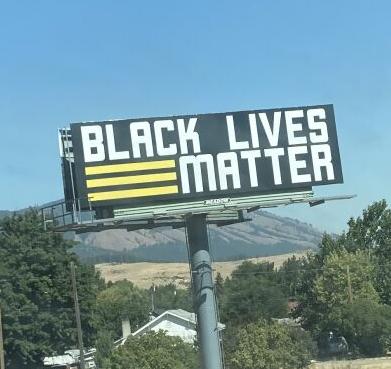 This Black Lives Matter billboard stands near La Grande off the eastbound side of Interstate 84 near exit 261. Maria Carmichael of La Grande led the fundraising effort for putting up the sign.

A billboard supporting the reelection of President Donald Trump faces eastbound traffic on Island Avenue. The Concerned Citizens of Union County, a new business with the purpose of funding the political billboard, purchased the display.

This Black Lives Matter billboard stands near La Grande off the eastbound side of Interstate 84 near exit 261. Maria Carmichael of La Grande led the fundraising effort for putting up the sign.

LA GRANDE — A new local group has put its money where its mouth is in an effort to reelect President Donald Trump.

The Concerned Citizens of Union County paid for a billboard displaying “Trump 2020” across a thin blue line flag, which represents support of law enforcement.

The billboard supporting the reelection of Trump went up Wednesday, Sept. 2, and faces eastbound traffic on Island Avenue near the intersection with McAlister Road. The display also makes clear who paid for it — the Concerned Citizens of Union County.

Allesha Swigert of La Grande registered the organization as a business Aug. 24 with the Oregon Secretary of State Corporation Division. But Norman Paullus, the former director of the La Grande Public Works Department, spoke for the group.

“We are addressing a quality of life and family values that they see President Trump brings to the American people. We didn’t solicit membership,” Paullus said. “The group is based on when the Black Lives Matter people were demonstrating. A group of us got together and started talking about how we believe all lives matter. Pretty soon, people throughout the area were talking about wanting to make a statement about how we felt and show our support.”

He said the organization raised funds to purchase the billboard as a way to show it supports the system in place and approves of what Trump brings to the table.

"We really wanted to make a public statement."

“We really wanted to make a public statement,” Paullus said.

Swigert registered the Concerned Citizens of Union County as a business with the state Corporations Division on Aug. 24 with the purpose of funding a political billboard, according to the business registration application.

Paullus would not say how much the billboard cost and also declined to say how many people are members of Concerned Citizens of Union County. He said the organization is not a political action committee in spite of its business purpose and is not registered as such.

Laura Fosmire, spokesperson for the Secretary of State Oregon Audits Division, confirmed the organization has not registered as a political action committee.

“Without more specific information from the organization, we can’t say whether they should be registered as a PAC,” Fosmire said.

Union County does not have any rules regarding elections signs that would prohibit the billboard, according to County Clerk Robin Church.

The All Lives Matter billboard is on Cove Avenue near 21st Street and features the phrase across the United States flag. The sign was finished Thursday morning, Sept. 3, one day after the pro-Trump sign was in place. Paullus said another organization put up that sign but had no information about who that is.

“It is not surprising, and it is a bit disappointing,” she said. “It stems from not understanding the meaning of Black Lives Matter. People take Black Lives Matter to mean that only Black lives matter, or the movement is somehow designed to cause racial division. I keep seeing the comment that putting any color in front of ‘lives matter’ is racist. That is a fundamental misunderstanding of the movement.”

The movement is not saying Black lives matter more than other lives, Carmichael said. Rather, it aims to bring awareness to the fact that the lives of Black people are undervalued in this country, that racial bias and prejudice have not been adequately addressed, and racism is a factor in police violence against Black people.

"Bringing awareness to racial injustice isn’t racist, but refusing to acknowledge its existence certainly is."

She said people have the right to express their opinions on billboards or elsewhere, but in her mind the Cove Avenue billboard is an inappropriate response to the Black Lives Matter sign.

Members of the Union County Democratic Committee did not respond to requests for comments.

But Union County Republican Committee chair Laura Laura Eckstein said the committee does not know who put up the “all lives matter” billboard.

“I value and appreciate the expression of all views,” Eckstein said. “It is an indicator of a healthy democracy, and a reflection of a robust variety of viewpoints in our community.”