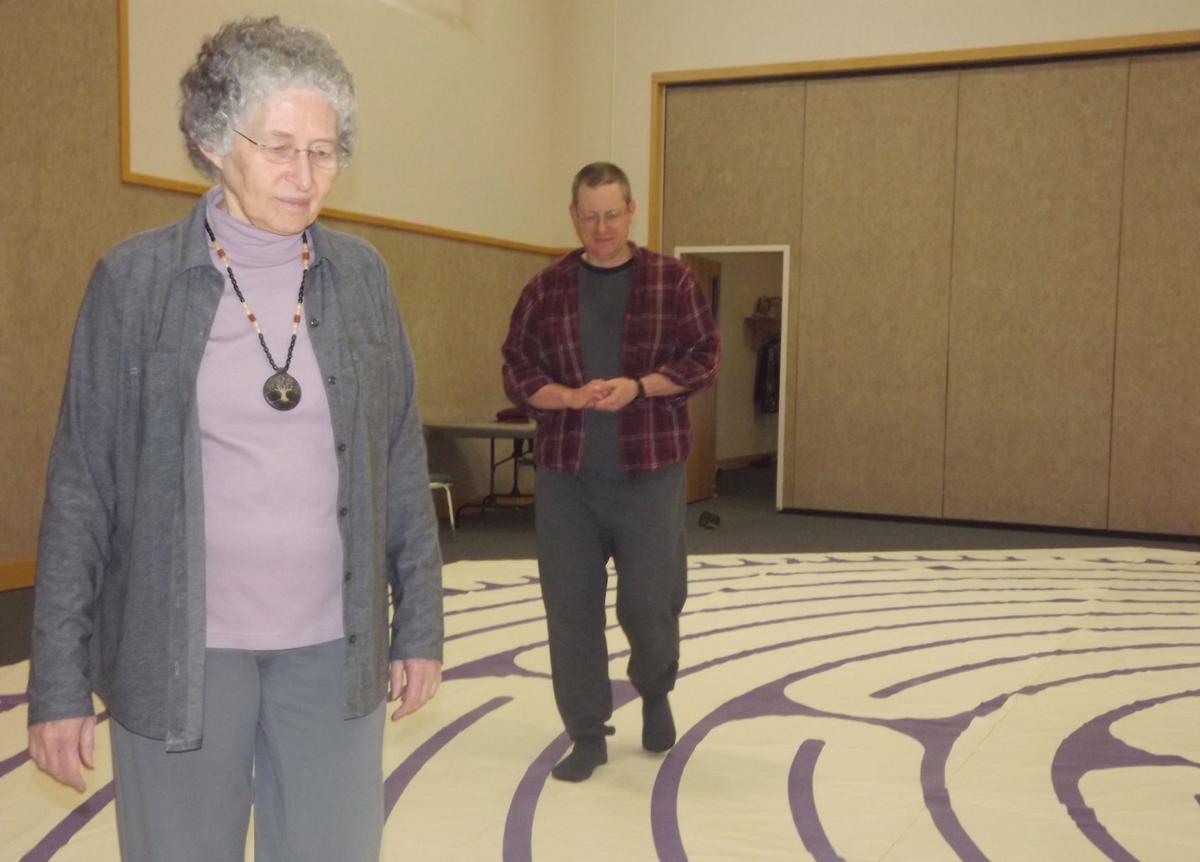 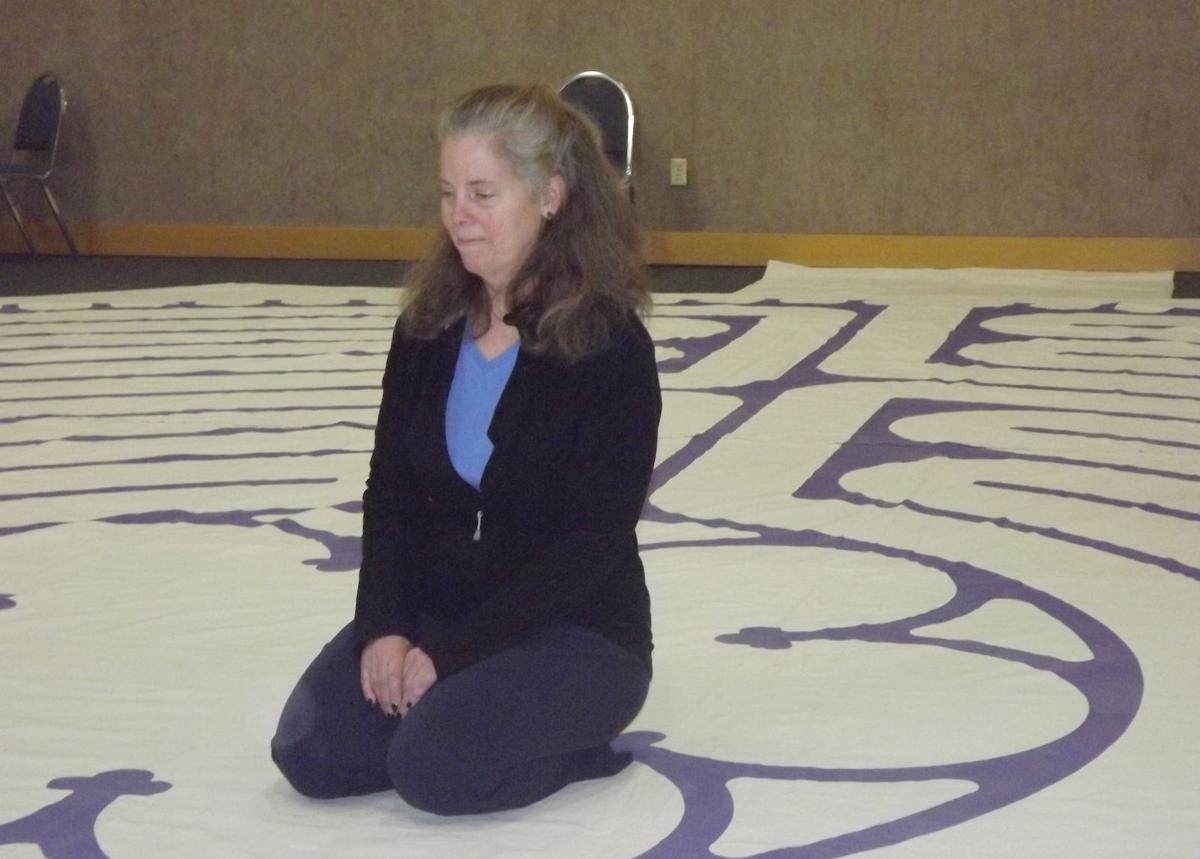 Nancy Knowles, an English and writing professor at Eastern Oregon University, reflects during a stop at the center of a labyrinth Saturday during a retreat at the Presbyterian Friendship Center, La Grande. 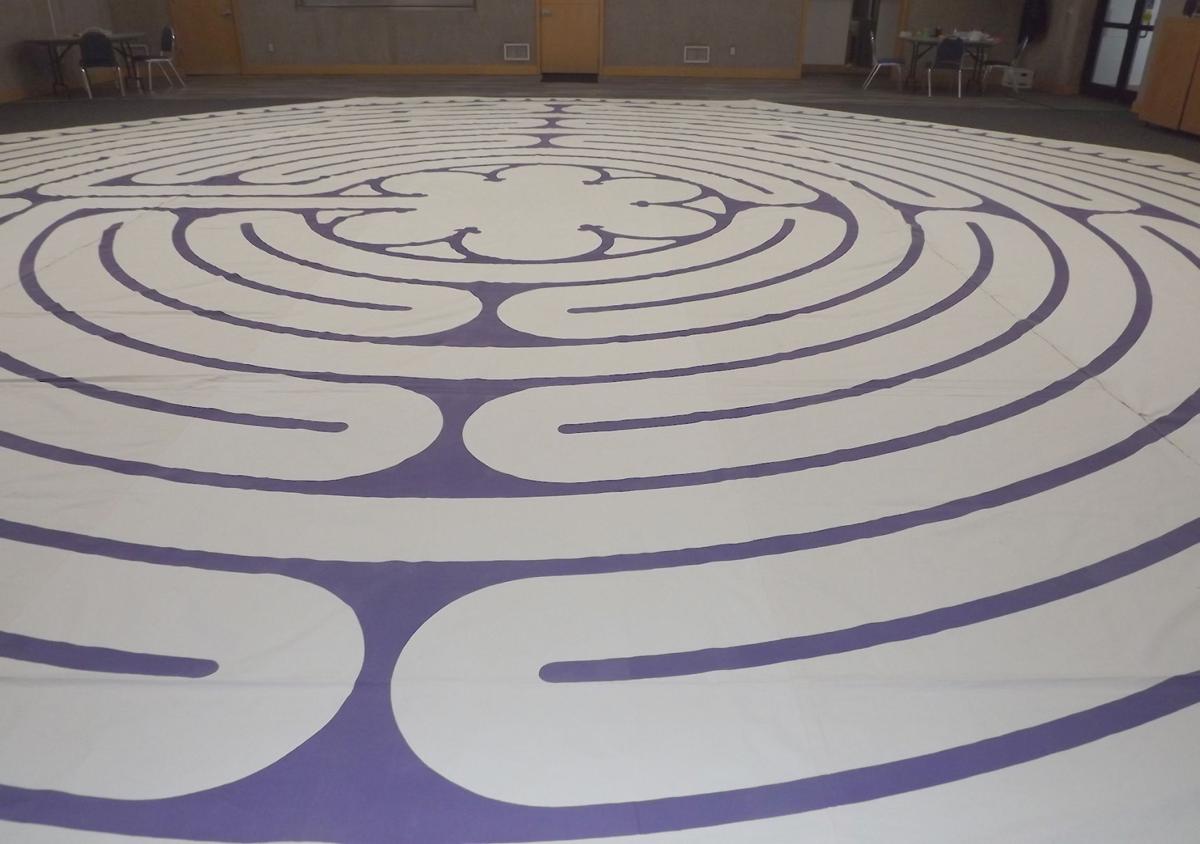 Versions of the labyrinth date back at least 3,000 years. La Grande locals Saturday walked this labyrinth canvas during a retreat. The pattern resembles the labyrinth on the floor at Chartres Cathedral in France.

LA GRANDE — Bad weather prevented many people in Union County from traveling Saturday, but it did not stop eight La Grande residents from taking a journey into an ancient, spiritual space.

The small but hardy contingent participated in a Labyrinth Retreat at the Presbyterian Friendship Center, La Grande. The aim of the five-hour event was to help people begin 2020 with an epiphany, an enlightening realization that allows people to understand a problem or situation from a new and deeper perspective, said Laura Hudson.

She and Colleen Nelson, a former pastor of the Zion Lutheran Church, La Grande, facilitated the retreat with aim of creating a tranquil, supportive environment.

"It was a very peaceful letting go of stress, one meant to give everyone a spiritual space," Hudson said.

The focal point of the retreat was a walk on an expansive labyrinth canvas that covered much of the floor of the Presbyterian Friendship Center's large meeting room. The circuitous design is one people have been walking for at least three millennia as a means of making personal journeys of discovery and exploration.

Those on a labyrinth trail "are walking a sacred path," said Hudson, who is co-pastor of the First Presbyterian Church in La Grande with her husband, Keith.

Hudson and Nelson encouraged the labyrinth walkers to clear their minds of stress and anything bothering them while moving toward the center. Once at the center, Hudson and Nelson explained, participants should rest, reflect on their thoughts and focus on receiving new thoughts, feelings and blessings.

Participants returned from the center of the labyrinth on the same path. They also were encouraged to reflect on any changes in feelings and their new inspirations during their return walk and to consider what these mean to their lives and how they can be taken into the world.

"If nothing happened (while at the center of the labyrinth), we asked them to consider what that meant," Hudson said.

Jo Dickson of La Grande said she was impressed with the retreat.

"It was done in a very thoughtful way. We had the opportunity to experience (the labyrinth) at our own pace," she said.

Dickson and the other participants at the retreat had the opportunity to meet Hudson and Nelson before and after their labyrinth walks to discuss their journey from a spiritual perspective.

While the labyrinth appears at first glance to be a maze, Nelson said, it is far from it.

Nelson said the labyrinth dates back 3,000 years to the Isle of Crete in the Mediterranean Sea. The pattern's link to spirituality was solidified in the Middle Ages when numerous cathedrals in Europe installed labyrinth patterns on their floors. Today, most of those cathedrals are gone, though several with the pattern remain, including the cathedral in Chartres, France. The labyrinth at the retreat duplicated the Chartres design, with a six-petaled flower in the center, which, according to one interpretation, Nelson said, represents the six days of creation in Genesis.

"A labyrinth is filled with sacred symbols," she said.

Historic labyrinths are hard to find, but the world today is filled with newer labyrinths, such as the rock labyrinth spanning 18 feet on a bluff at Land's End, in San Francisco, California, the creation of artist Eduardo Aguilera. People also walk that labyrinth's pattern.

Saturday's labyrinth retreat was the third Hudson and Nelson conducted and likely will not be their last.

"We were very pleased with the response," Nelson said, "and we hope to make it an annual event."