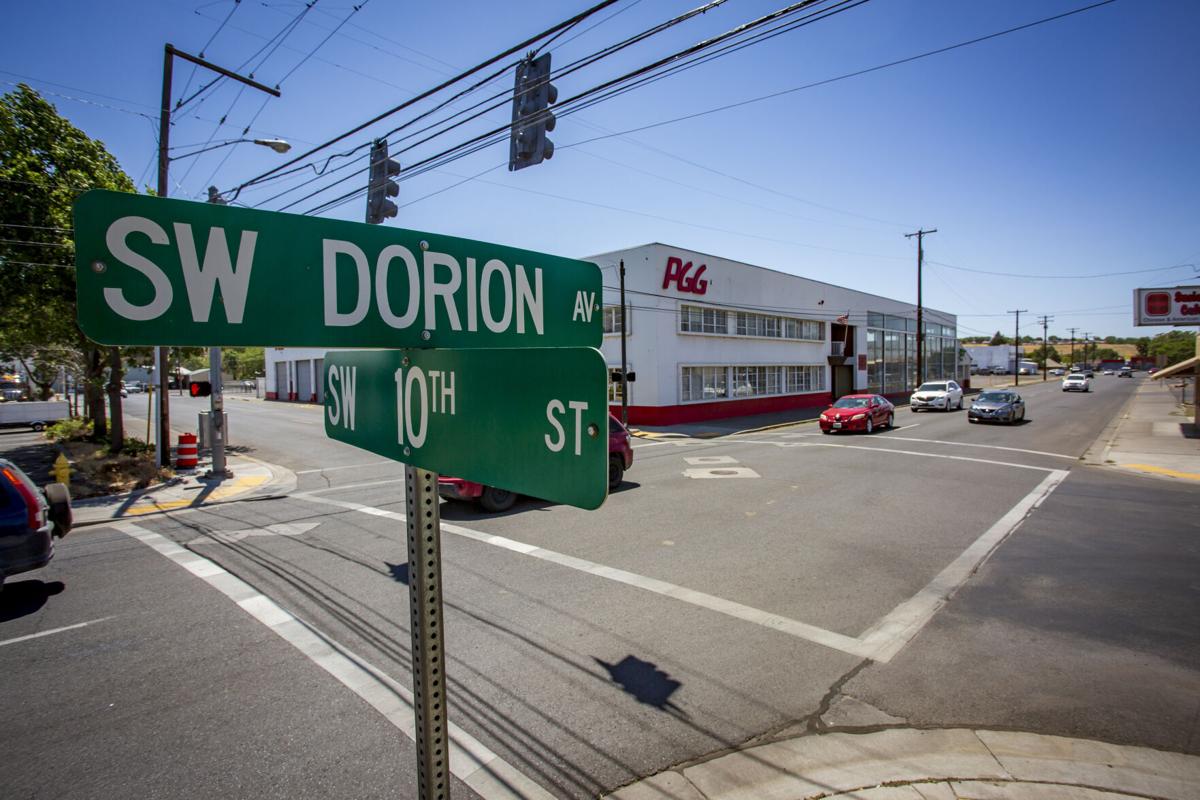 Cars pass through the intersection of Southwest Dorion Avenue and 10th Street in Pendleton on July 16, 2021. The intersection was the site of a 2019 crash between a motorcycle and car. Motorcyclist William Powers lost his left leg in the crash and on July 7 filed a lawsuit in Umatilla County Circuit Court seeking almost $7.9 million from Moyin Yusuf, the driver of the car. 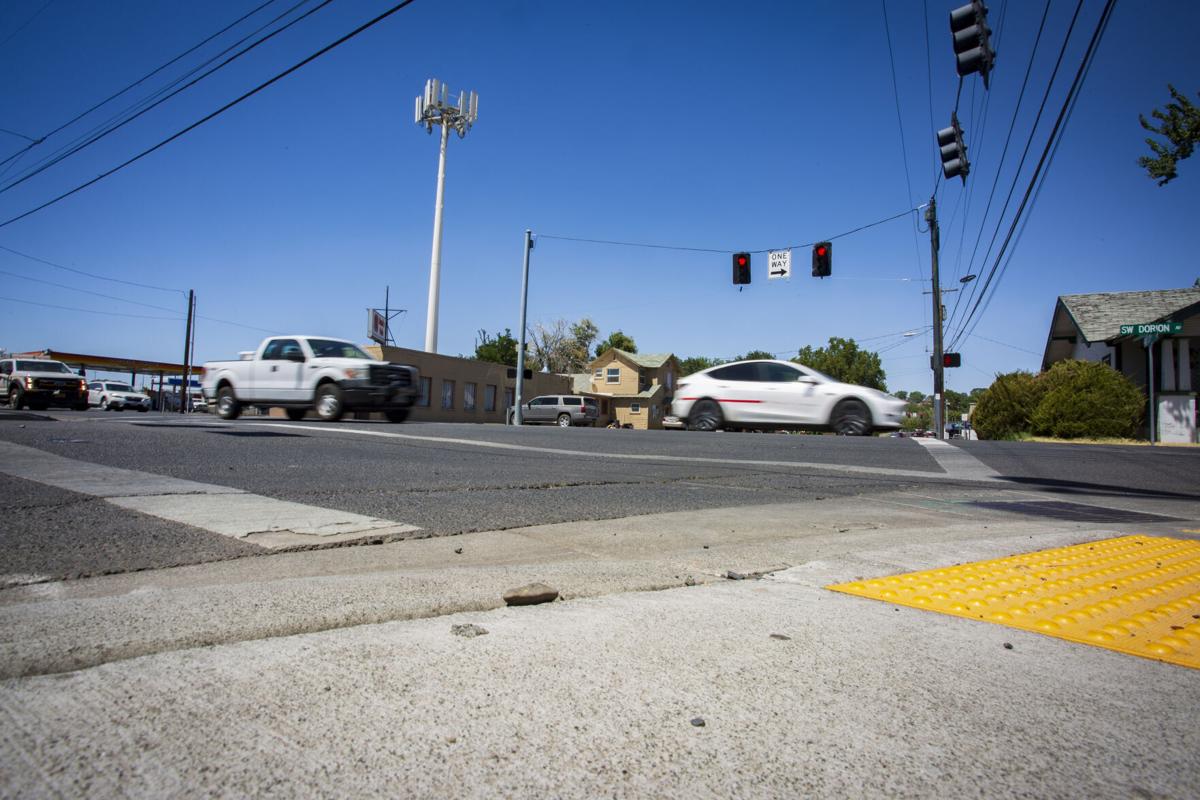 Vehicles pass through the Intersection of Southwest Dorion Avenue and Southwest 10th Street on July 16, 2021, in Pendleton.

Cars pass through the intersection of Southwest Dorion Avenue and 10th Street in Pendleton on July 16, 2021. The intersection was the site of a 2019 crash between a motorcycle and car. Motorcyclist William Powers lost his left leg in the crash and on July 7 filed a lawsuit in Umatilla County Circuit Court seeking almost $7.9 million from Moyin Yusuf, the driver of the car.

Vehicles pass through the Intersection of Southwest Dorion Avenue and Southwest 10th Street on July 16, 2021, in Pendleton.

PENDLETON — A 2019 vehicle crash that resulted in a Canadian man losing his left leg now is the subject of a $7.9 million lawsuit.

On July 7, attorneys for William Powers of Calgary, Canada, filed a lawsuit in Umatilla County Circuit Court alleging that Moyin Yusuf acted negligently when her SUV collided with Powers’ motorcycle near the intersection of Southwest Dorion Avenue and 10th Street, leading to “past, present and future pain, suffering, disability and disfigurement.”

According to Powers’ complaint, he was driving on Dorion in the right lane and Yusuf in the left lane when he “executed a lawful lane change into the left-hand lane” on July 16, 2019. The complaint states that Yusuf’s SUV rear-ended Powers’ motorcycle after he completed the lane change before running him over. The lawsuit accuses Yusuf of following Powers too closely, “excessive speed,” and driving in a “reckless manner” before going to list 54 injuries he suffered as a result of the crash, including “traumatic amputation of his left leg below left knee.” Powers is suing Yusuf for nearly $899,700 in economic damages and $7 million in non-economic damages.

The lawsuit makes a direct connection between Yusuf’s driving and Powers’ injuries, but reports from the Pendleton Police Department complicate Powers’ and his attorneys’ narrative.

Powers told police he was in town for Pendleton Bike Week, having just attended a different motorcycle rally at Hell’s Canyon. Traveling through Wallowa County the day before, Powers said a bee hit him above the left eye, spurring him to stop at Wallowa Memorial Hospital in Enterprise to receive treatment for swelling. He camped at Deadman Pass the night before the crash, and after arriving in Pendleton, he went to Walmart to pick up some Benadryl to further treat the swelling. Powers told a police officer he couldn’t remember any details from the crash, but he thought he might be on his way to downtown Pendleton to grab some “food and beer.”

Upon arriving at the intersection at 4:34 p.m., Pendleton police officer Nathan Bessette described a grisly scene.

“I observed the motorcyclist lying on the ground approximately 15-feet to the northwest of where the bike had come to rest with his head pointed toward the southwest, laying on his right side,” Bessette wrote in a report. “ I immediately noticed his left leg was completely mangled, his clothing had been ripped away and it appeared he had compound fractures amongst the mangled flesh.”

Powers was transported to St. Anthony Hospital and then flown to Kadlec Regional Medical Center in Richland, Washington, so police spent the days following the crash interviewing various witnesses to the crash.

According to the report, Yusuf told police shortly after the crash that she was driving home from work when she approached the intersection of Dorion and 10th, driving 35 in a 30 mph zone. Recalling the light being green, Yusuf said she saw a “black blur” and “felt a thump” as she entered the intersection. Attempting to pull over the right side of the road, Yusuf “felt a large thud” underneath her right tires, only viewing Powers and his motorcycle in the road after coming to a stop at the 900 block of Dorion. When a different police officer conducted a follow-up interview with Yusuf later that evening, she provided him with a similar account of events.

A security video and a swollen eye

Police had trouble drawing information from other witnesses to the crash. The people police interviewed provided conflicting or incomplete accounts. But police caught a break when a manager at Dave’s Chevron told police her store had security footage of the crash.

In a report, Chuck Byram, a then-lieutenant with Pendleton police who now serves as police chief, wrote he viewed the security video the morning after the crash. Although a smudge on the camera lens partially obscured the recording, Byram said he could see Powers and Yusuf approach the intersection, with Yusuf driving faster than Powers.

“At the intersection I could just make out Powers’ motorcycle making a left turn from the south lane in front of Yusuf’s SUV in the north lane,” he wrote. “I could see Yusuf’s brake lights activate, but could not see the collision.”

A week after the crash, officer Shelly Studebaker reported she traveled to Tri-Cities to visit Powers in the hospital to get a statement from him. Post-amputation, Powers shared with Studebaker his account of the events leading up to the crash and shared with her photos from his Facebook blog of his swollen eye. Studebaker noted a photo he took the morning before the crash appeared to show “the eye completely closed due to swelling,” but he denied his swollen eye inhibited his vision at the time of the crash.

Studebaker told Powers she wasn’t going to cite him, but he had caused the crash when he made an illegal left turn.

Ryan Armentrout, one of Powers’ attorneys, said he would need a list of questions so he could confer with his client before commenting. The East Oregonian sent Armentrout the questions, but did not receive a response as of press time. Yusuf could not be reached for comment.