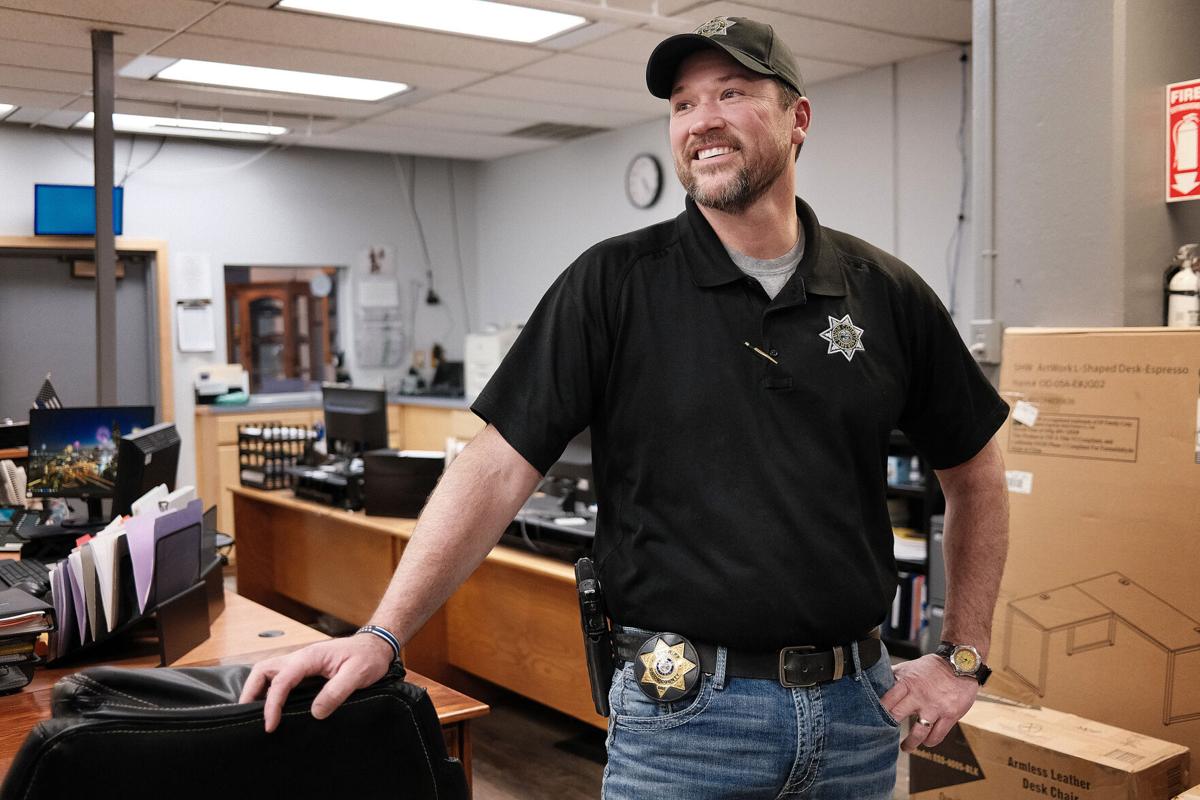 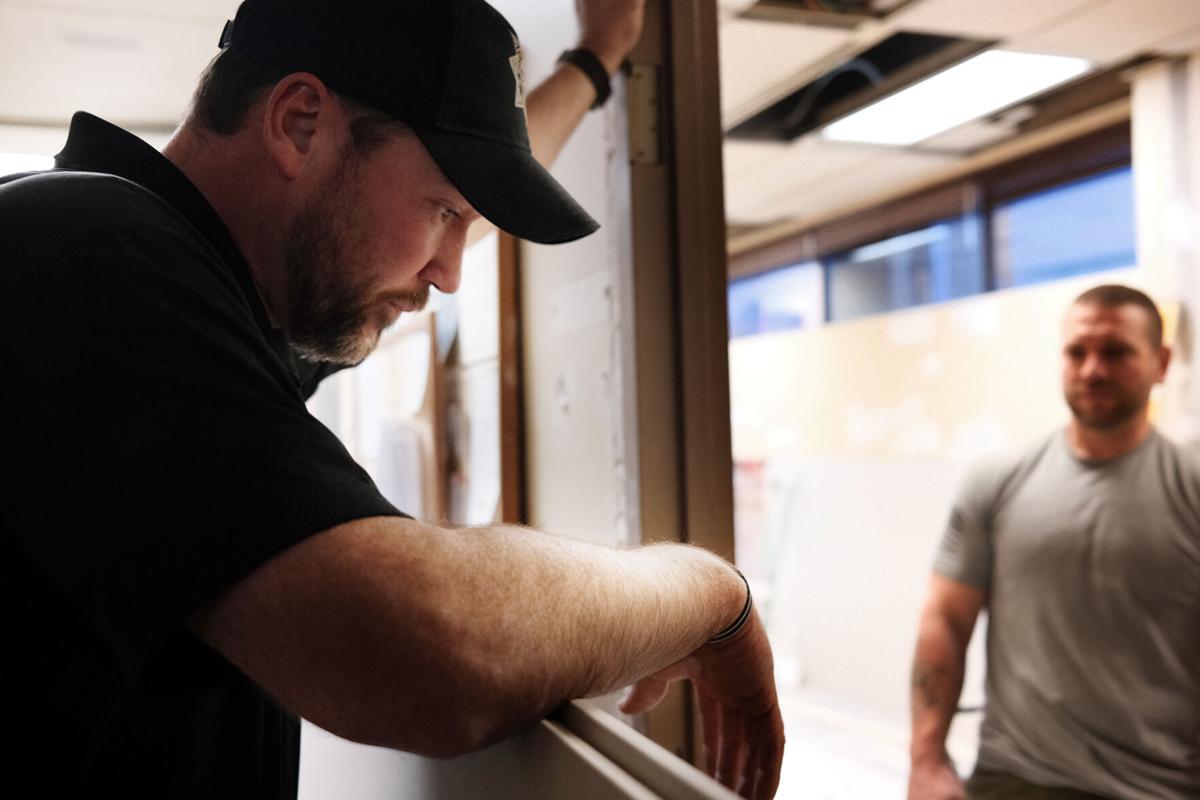 Union County Sheriff Cody Bowen leans over a piece of drywall in the sheriff’s office on Friday, Feb. 19, 2021. One of Bowen’s first acts as sheriff was to begin making renovations to the headquarters in La Grande, including tearing down a wall between deputies and supervisors. 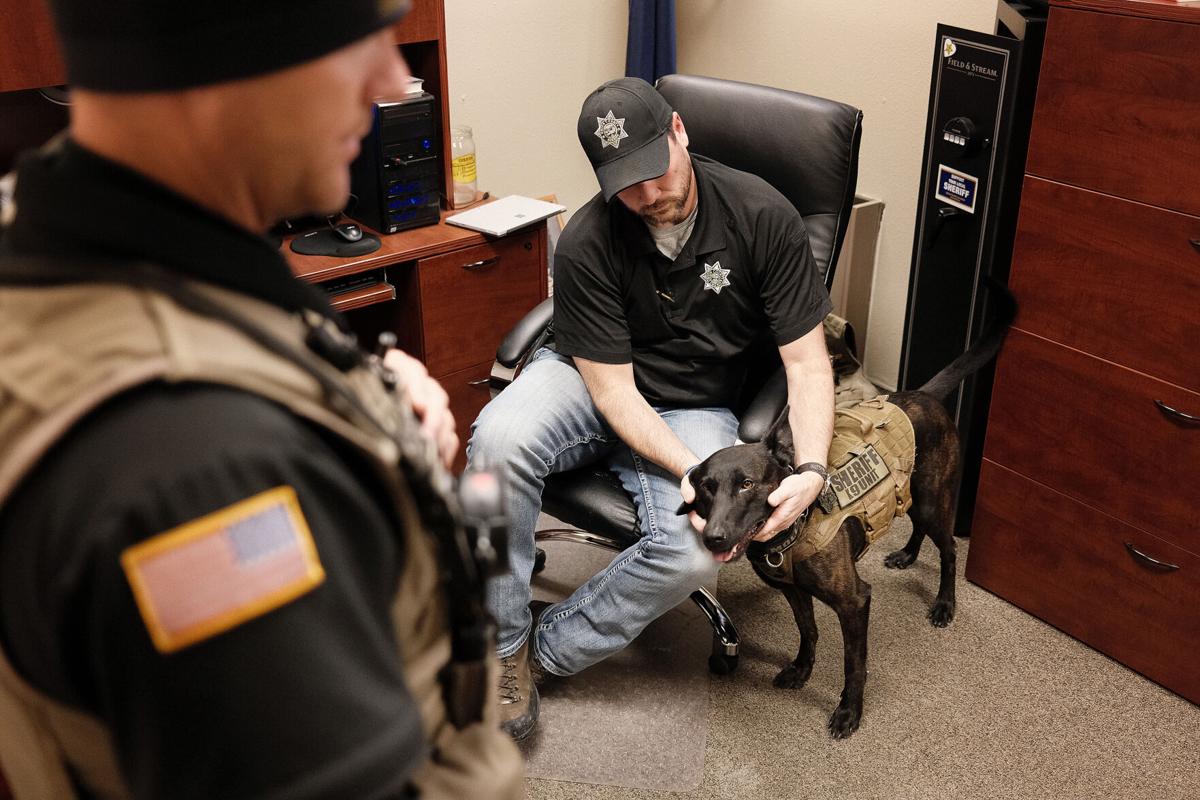 Union County Sheriff Cody Bowen pets K-9 unit Molly in his office on Friday, Feb. 19, 2021, as her handler, deputy Dane Jensen, discusses the benefits she brings to the sheriff's office. 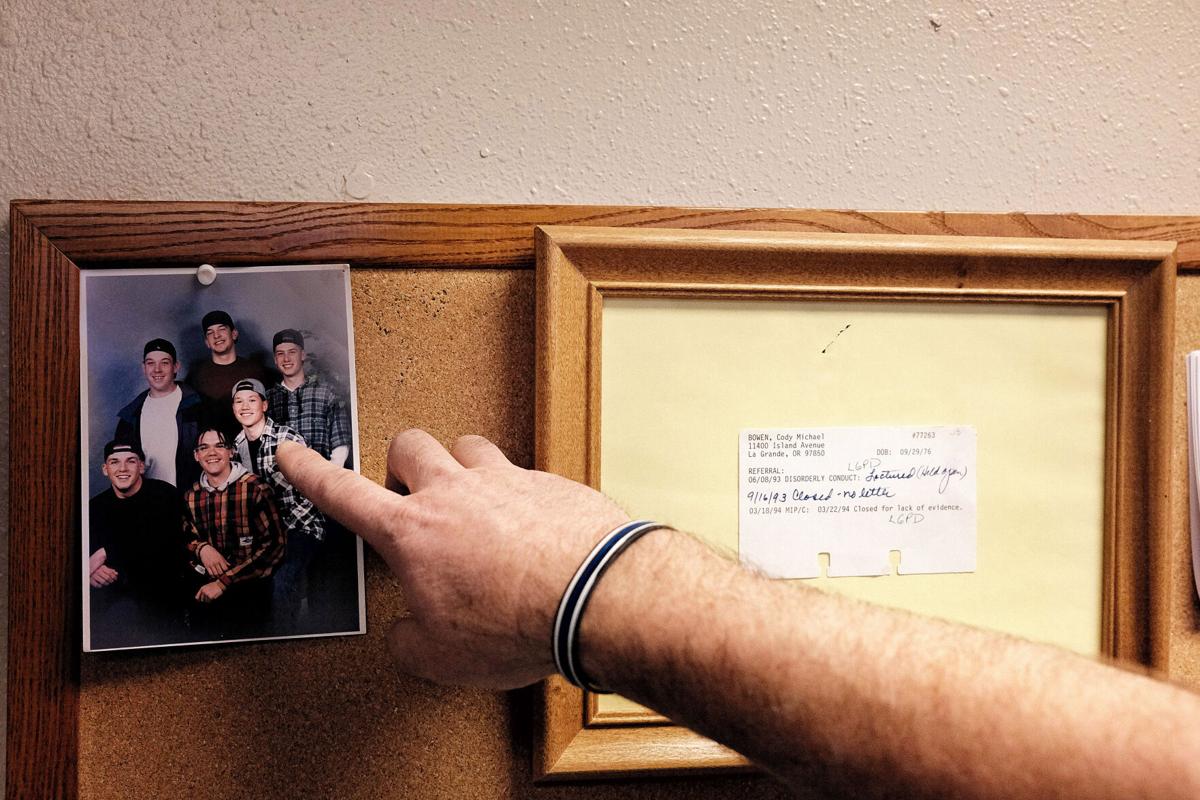 Union County Sheriff Cody Bowen points out a younger version of himself he keeps pinned to a bulletin board in his office. To the right hangs an index card from 1993 showing a citation he received in his youth, a reminder he says serves to keep him grounded.

LA GRANDE — A little dust and dirt showed on the black polo shirt Union County's new sheriff wore, a reflection of the work he's been helping with just feet from his cramped office.

Sheriff Cody Bowen took time late Friday afternoon, Feb. 19, for an interview with The Observer. Three days earlier the lanky Bowen kicked a hole through a wall in a nearby room, signaling the start of some demolition and renovation. The move was as much symbolic as literal.

That wall divided the break areas for the patrol deputies and their supervisors, creating small spaces for both. Removing it and adding some other upgrades, he said, makes the space more useful and roomy. It also shows he wants the sheriff's office to function as a team.

Now almost two months into the post, Bowen said he aims to be a hands-on sheriff, out on patrol and available, who is not looking to micromanage his staff. He said the supervisors in the sheriff's office are experienced and capable of overseeing patrol, correction and dispatching services.

"I want them to be able to do their jobs," he said. "That's why they're there. Let them shine."

Getting into the job

Bowen jumped into the race for sheriff in late January 2020 to defeat his then boss. Boyd Rasmussen was seeking a fifth term amid rumors the Oregon Department of Justice was investigating him for misusing the office. The DOJ in late April revealed it looked into several accusations against Rasmussen, including that he created a deal in 2011 to provide Elgin with police services, for which he received more than $7,000 while still serving as sheriff.

The DOJ found any wrongdoing on Ramussen's part was beyond the statute of limitations, but the report helped knock him out of the race, easing the path for Bowen to cruise to victory in November.

Bowen credited Rasmussen for making improvements to the agency over his four terms as sheriff, such as bringing on Molly, the sheriff's office K-9 unit. But Bowen also said he was not interested in talking much about Rasmussen or his legacy. Bowen, however, seemed to embrace a different thinking about his role as sheriff compared to his predecessor.

The new sheriff has immediate needs to address and campaign promises to fulfill, including operating the sheriff's office in a more transparent fashion to rebuild some trust with the public.

The sheriff's office has 16 certified patrol officers, and that includes Bowen, and 13 corrections officers. Bowen said he is working to expand that with another detective, a patrol deputy and a corrections deputy before the next fiscal year. He said the candidates for each position are going through background checks now.

The hiring committee that recommended the candidates, he said, included members of the district attorney's office and two La Grande-based nonprofits that work closely with law enforcement: the Mount Emily Safe Center, a child abuse intervention center, and Shelter From the Storm, which helps victims of interpersonal violence and sexual assault. Bowen said having these organizations participate in the hiring process for the sheriff's office is a way to be more transparent and build better connections with the community.

Team building is another area of focus. Bowen says little things can make a difference, such as showing staff a positive attitude.

"Take care of your people," he said. "Be nice. Be pleasant to be around. Be flexible."

That's a tone he said he strives to set each morning when he comes to work and what he wants the staff to exemplify. Whether someone is a patrol deputy or works in the jail, they all serve the community and are working with the same goal of public safety, he said, and every time they're out in the public they're representatives of the sheriff's office.

Since taking the post, Bowen said, he has spent a chunk of time going through the $4.5 million budget the sheriff's office operates on.

Bowen also is eying what to do with an aging building.

"The building is falling down around us," he said. "We are maxed out on space. We share space with La Grande Police Department and dispatch. ... There's mold, it leaks."

He compared the facility to an old car. At some point the maintenance is not worth the cost to keep it running.

But how soon the county can find another building to serve as a sheriff's office is an open question. Bowen said he envisions what he called a new "justice center" that would house the sheriff's office, La Grande PD, dispatch and mental health services.

Like other law enforcement agencies throughout the Eastern Oregon and the nation, mental health calls for service are part of the daily work. Bowen while running for sheriff focused on the need to improve mental health services in the county. He said he remains eager to find a better way to help people suffering from mental illness.

"The subject crying for mental health help ends up in jail," he said. "And the jail is not the place to help someone with mental health issues."

He said he also knows making such a justice center a reality would not be inexpensive.

Bowen's small office reflects who he is. There's a couple of deer skulls on the wall, one with antlers shedding. A plaque of the Second Amendment hangs to the left of his desk.

And right by the doorway is a photo of Bowen in his younger years and some of the ruffians he ran with. Next to that, in a frame, hangs an index card.

He pointed to the other young men in the photo with him, recounting where each is now. All went on to productive lives and careers, he said. To the right of the photo is the index card Bowen framed revealing he received a citation for disorderly conduct in 1993.

"It's one of the things to this day that keeps me grounded," Bowen said.

Bowen said he happened upon the card in old county records. The index card serves as a reminder of the path he could have taken, he said, and shows people can make better choices and change. His parents divorced when he was young, and as a teen he got into some trouble, but he said he "straightened up" right after high school when he became a father at 19 and went with his girlfriend to Pendleton, where she attended Blue Mountain Community College, before he built a career in law enforcement.

That time of his life informs him in other ways, Bowen said, such as helping him relate to people, from the sheriff's office staff to the larger community. That's another gap he said he wants to fill in.

Bowen said he wants to find ways for the community to better know the people working in the sheriff's office. They buy their groceries at local stores, their children go to schools in Union County. They are members of the community.

He also said they happen to be fine law enforcement employees.