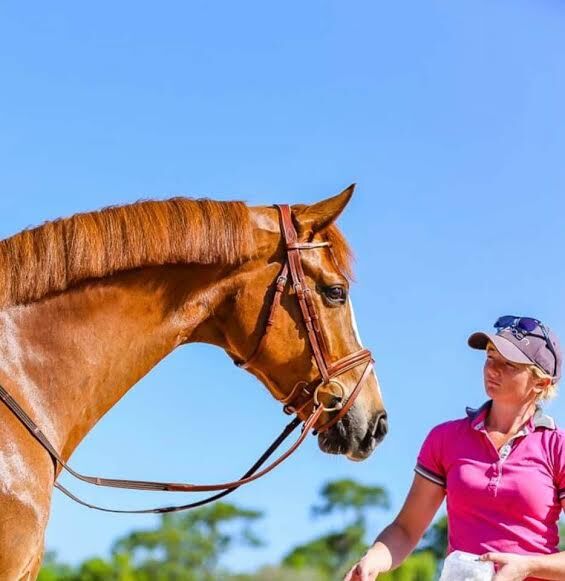 Michelle Brady of La Grande competed for eight years in the sport of dressage. Here she is in Palm City, Florida, with one of the horses she trained. Brady has returned to her home town.

Michelle Brady of La Grande competed for eight years in the sport of dressage. Here she is in Palm City, Florida, with one of the horses she trained. Brady has returned to her home town.

LA GRANDE — Michelle Brady, an accomplished dressage rider and trainer, is back in her hometown after eight years of getting an inside look at her sport at its best.

Brady, a 2009 La Grande High School graduate, competed successfully in U.S. Dressage Federation shows, trained up to eight horses a day, traveled to Europe four times and worked for and studied under one of the sport’s best, Catherine Haddad Staller, in Califon, New Jersey, and Wellington, Florida.

Brady won a top honor during her eight-year sojourn — a gold medal from the U.S. Dressage Federation in 2017. This prize is awarded to riders who meet or exceed a gold medal standard score at an organization- sanctioned competition.

Dressage is the art of riding and training a horse in a manner that develops obedience, flexibility and balance. Successful dressage riders make those watching believe they have achieved a perfect partnership with their horse.

“It appears that the rider is dancing in harmony with the horse,’’ Brady said. “There is synchrony between the horse and the rider, it is like they are reading each other’s minds.”

Brady credits much of her success to the instruction from Staller, one of the United States’ premier dressage riders, who has represented her country at numerous competitions.

“She made me the rider I am today,” Brady said. “She is so compassionate and caring. I am incredibly thankful for the opportunity she gave me.”

Staller often told Brady that a key to mastering dressage is letting experienced horses, designated as schoolmasters, instruct you.

“She said your (schoolmaster horse) will always be the best teacher,” Brady said.

“He taught me more than any person could,” Brady said. “He knew more than I knew as a rider. I took that knowledge and used it to train other horses.”

Brady traveled to Europe with Staller’s horses to perform at dressage competitions. Brady cared for the horses on the flights. She said the horses handled flying well, and one, a gelding named Hotmail, was particularly expert at flying. Hotmail had flown so often he could tell when the aircraft was about to land.

“He could sense when a plane was descending,” Brady said, explaining the horse would then step back so he would be in a better position to support himself from the impact of the landing.

Brady remained with the horses throughout their stays in Europe.

Brady’s four trips to Europe took her to The Netherlands, Germany, Denmark, Sweden and Austria. Dressage draws much larger crowds in Europe than it does in the United States, she said. Often dressage competitions are part of horse shows that feature jumping and cross country events.

“They are like fairs,” Brady said, noting the horse shows are most popular in Germany.

Brady spent each winter in Wellington, 66 miles north of Miami. Wellington is the center of the dressage universe during this time, and many of the world’s top dressage riders come to participate in competitions there.

“It is the hub (of the dressage world in the winter),” Brady said.

In Wellington she learned about the importance of being sensitive to a horse’s needs and individuality.

“You have to be well acquainted with how they react to their environment,” she said.

If she discovered something such as umbrellas popping would rattle a horse, Brady took steps to help the horse become tolerant of the noise because these cannot be avoided at many dressage shows. Understanding the speed a horse is comfortable working at also is crucial when training.

“You have to move at a pace that works for the horse,” Brady said. “You can’t push them. A horse will only go so far in training.”

Brady, who grew up in La Grande, trained horses six days a week in Wellington and Califon and never tired of it. She said she cannot remember a time when she was not interested in horses.

“I have been obsessed since I was very young. I have horse fever,” said the daughter of Patty Morris and Mark Brady.

The LHS graduate credited a number of people with helping to inspire her to become a dressage rider and trainer, including her 4-H instructor Margo Mack.

“She nurtured my love of horses,” Brady said.

Carole Novitske, who now lives in Virginia, is another.

“She said, ‘If you want to learn to ride, go to Catherine Staller,’” Brady said.

Brady is eager to share what she has learned about dressage over the past eight years and will be conducting clinics in Oregon and Washington beginning in August.

Information on her clinics is available via email at haeferdressageinc@gmail.com. At her clinics Brady will assess individual riders and their horses.

Her goal is to “help riders build or strengthen partnerships with their horses.”