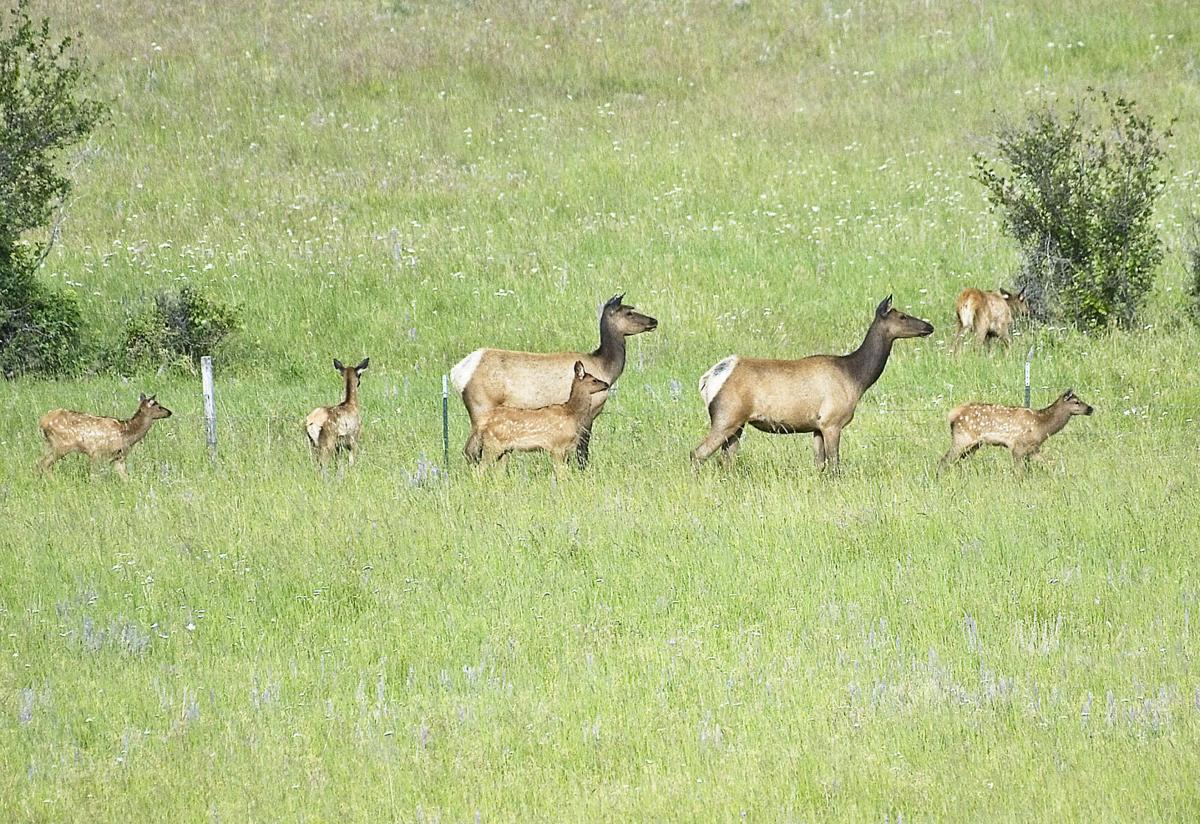 Elk cows and calves line up along a fence on The Nature Conservancy’s Zumwalt Prairie Preserve. According to the Oregon Department of Fish and Wildlife, the population of elk on the preserve has declined in recent years. 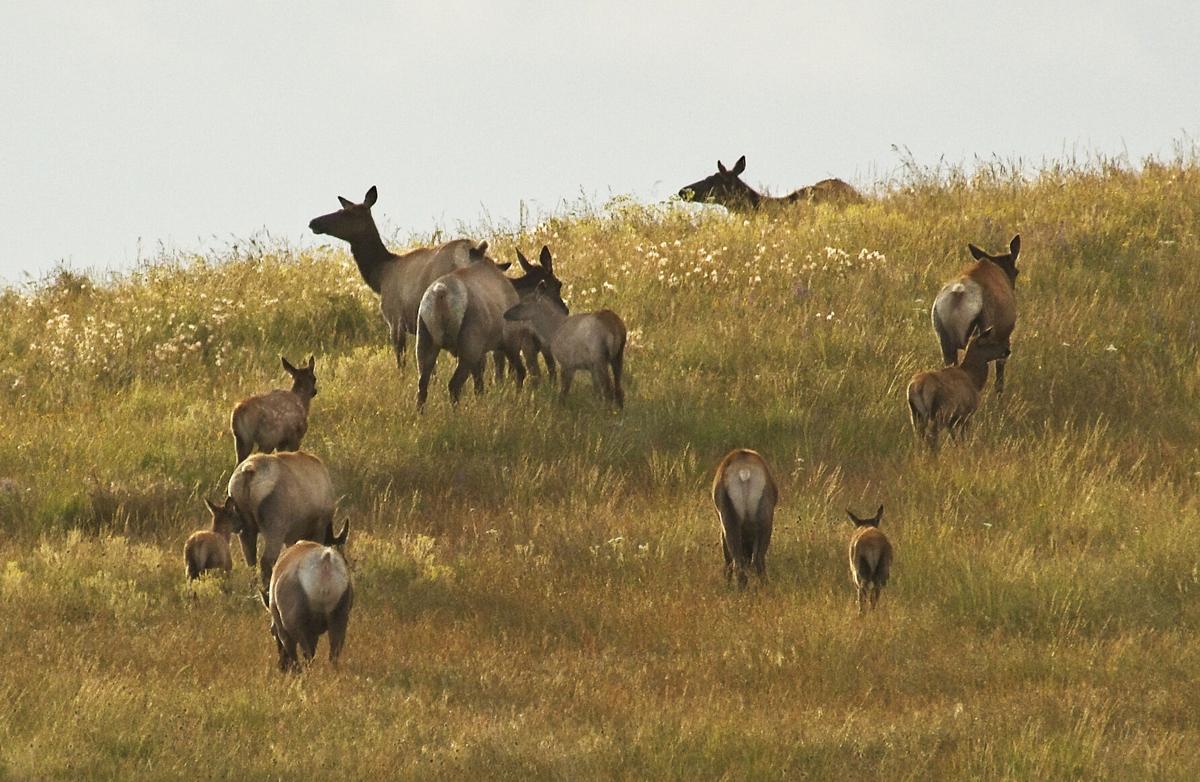 In early morning, elk mosey up a slope on private lands on Zumwalt Prairie for their post-breakfast nap. 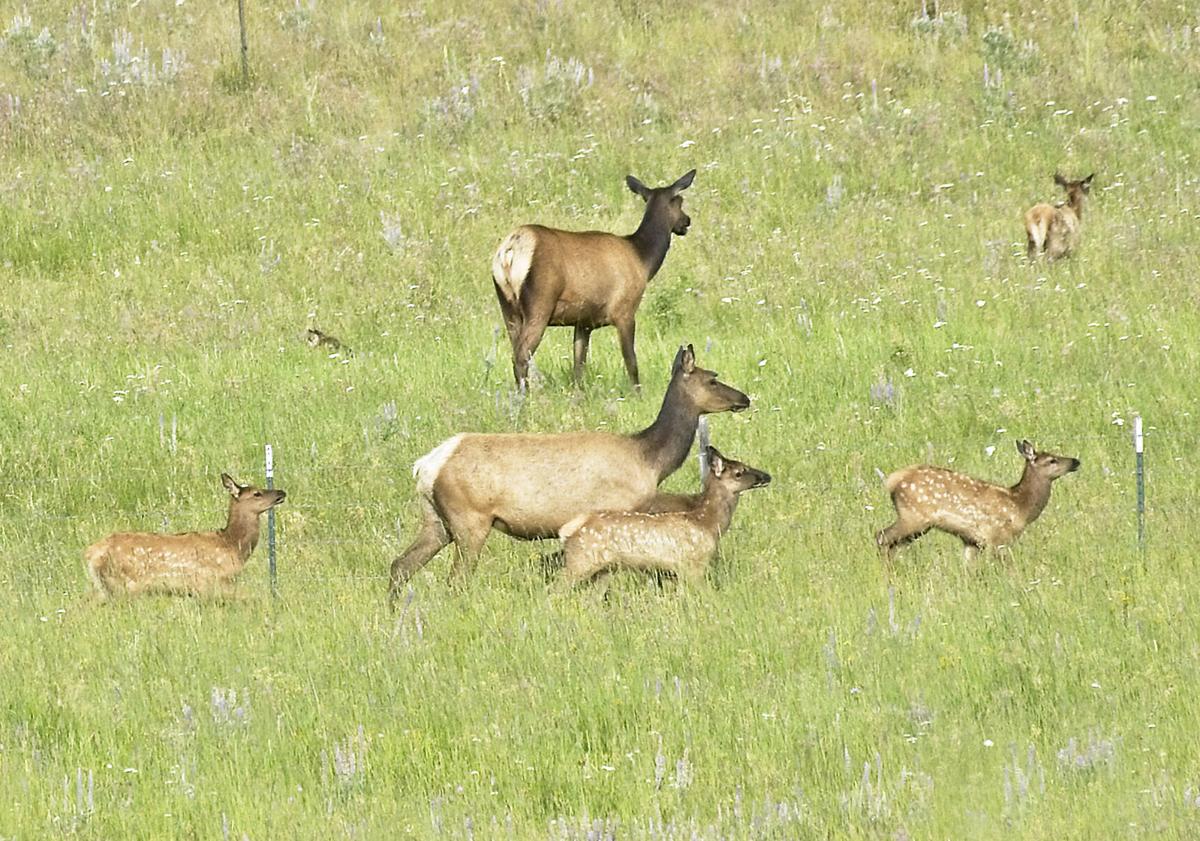 An elk cow escorts three calves to find a safe place to cross a fence on The Nature Conservancy’s Zumwalt Prairie Preserve.

Elk cows and calves line up along a fence on The Nature Conservancy’s Zumwalt Prairie Preserve. According to the Oregon Department of Fish and Wildlife, the population of elk on the preserve has declined in recent years.

In early morning, elk mosey up a slope on private lands on Zumwalt Prairie for their post-breakfast nap.

An elk cow escorts three calves to find a safe place to cross a fence on The Nature Conservancy’s Zumwalt Prairie Preserve.

WALLOWA COUNTY — Rocky Mountain elk have often been a controversial animal in Wallowa County, but one long-standing issue — the number of elk on Zumwalt Prairie’s private lands — has finally been brought under control.

The consequence? Ranchers are happier, but elk tags on the Zumwalt and in the Chesnimnus hunting unit have been reduced for the 2020 season.

Elk numbers have see-sawed from abundance to near extinction and back to abundance. On Zumwalt Prairie’s mostly private land, the 2020 population estimate for elk in the Oregon Department of Fish and Wildlife’s Chesnimnus unit, which includes the prairie, is 3,500 elk. But as recently as 2015, the number of elk on the unit approached 4,500, according to ODFW data.

“There were herds of 400 to 500 animals,” said Jim Akenson, senior conservation director of the Oregon Hunters Association. “It looked just like Africa’s Serengeti except instead of wildebeests you had elk.”

The elk generally spend the late summer on U.S. Forest Service land and fall and winter in the canyons and breaks. But in spring and early summer, they feast on tender, nutritious prairie grasses that ranchers intend to graze with livestock. And the elk were remaining longer on prairie grassland. Stronger, but not as agile as mule deer, elk tend to run through fences rather than jumping over them. The result is damaged fences and stray cattle.

“With the increase in elk numbers in the Chesnimnus unit, an increasing number of elk were utilizing the private prairie ground year-round,” said Shane Talley, an ODFW assistant wildlife biologist. “The elk had found a safe area with good habitat where they were not being pressured by public land users and public land hunters. This caused an increase in the amount of damage experienced by the landowners on the prairie.”

In recent years a number of stakeholders — landowners, ranchers, conservationists, hunters, the Oregon Department of Fish and Wildlife, the Oregon Hunters Association, the Nez Perce Tribe and the U.S. Forest Service — have worked together to better manage the elk population. The community effort was coordinated by the ODFW’s Pat Mathews, rancher Tom Birkmaier and OSU Extension Agent John Williams.

Attempts at simply hazing the elk off the land were less than successful. Calves born on the grassland were more likely to consider the open prairie landscape home and return there as adults, according to The Nature Conservancy’s biologist Chad Dotson. And the long-distance views afforded by grassland kept the animals and their young offspring safer from predation by cougars, bears, coyotes and wolves.

“If a calf is born in the grasslands, chances are that’s what it considers home, that’s where it wants to live when it grows up,” Akenson said.

The tool used to change this particular elk mindset has been seven years of Zumwalt hunts that focused mainly on cow elk.

“Elk began to get the message that they are not welcome,” Akenson said. “And so they more readily moved into canyon breaks of heavier timber. Ultimately, they began to learn that their real security is the canyon breaks and canyon country.”

Elk also began to more toward the Nez Perce’s Precious Lands area in northern Joseph Creek, a place they are welcome.

In addition, Forest Service hazardous fuels reduction practices, such as timber removal, thinning and prescribed burning on federal and private lands have helped increase elk habitat in the unit. The presence of fresh-sprouting spring forage on prescribed burns at the northern end of Zumwalt Prairie, for example, has helped entice elk off the grassland and back into the woods, according to Talley. This is doubly helpful because some of the older fires that opened up forest habitat to more grazing and browsing, including the 1988 Tepee Butte Fire, had since closed in.

“By removing cow elk we can reduce the population growth rate and eventually the total population,” Talley said.

And so the ODFW opened multiple antlerless elk seasons beginning in August and ending in January. Many private landowners on the prairie also opened their land to tag holders.

The reduction in elk on private lands has been significant.

Birkmaier said before efforts began to move elk from private to public lands, “80% of the elk in the Chesnimnus unit resided on private lands on the Zumwalt Prairie that amounted to only about 15% of the total unit area. That’s an amazing statistic that even the ranchers found hard to believe.”

The rancher estimated elk populations have dropped from about 4,500 animals to about 2,600 today. But Birkmaier sees factors beyond hunting as contributing to the decline.

“Hunting is maybe 50% of the cause,” he said. “The other part is that we’ve had two hard, polar-vortex winters, with snow on the ground into March and April.”

That made it hard for calves and yearlings to survive, reducing elk populations on the prairie. But Birkmaier harbors some concern the bounteous crop of elk calves this spring might reverse the downward population trend.

“There are just a lot of calves out there,” he said. “Lots and lots of calves.”

Other Zumwalt ranchers agree elk numbers are down, and elk damage has been reduced.

“In the past couple of years, the number of elk that have been on our land has been down some,” said Lew Bloodsworth, a longtime Zumwalt Prairie rancher whose land is adjacent to The Nature Conservancy. “Not as many get onto our land in spring and eat up all the best forage before the cattle get onto the range.”

In fact, elk numbers on the Zumwalt Prairie and the Chesnimnus unit now are below the target number.

“We observed a more rapid decline in the population than we expected over the last three years,” Talley said. “This resulted in an emergency tag reduction for the 2020 Zumwalt hunts and changes to the tag numbers and season structure for 2021.”

The tag reduction for the 2020 season is down to 61 tags from 110 tags in each of the seven Zumwalt archery and rifle seasons. So, 343 fewer antlerless (cow) tags, or a 40% reduction overall in cow tags.

“This is a little less than 18% reduction in total elk tags for the entire unit,” Talley said.

The ODFW aims to slow the rate of population decline with the goal of a stable and healthy elk population at manageable levels for hunters, the public and private landowners.

“Both sides — the ranchers and the hunters — think elk are important,” Dotson, the TNC biologist, said. “No one wants to see the numbers too high or too low.”