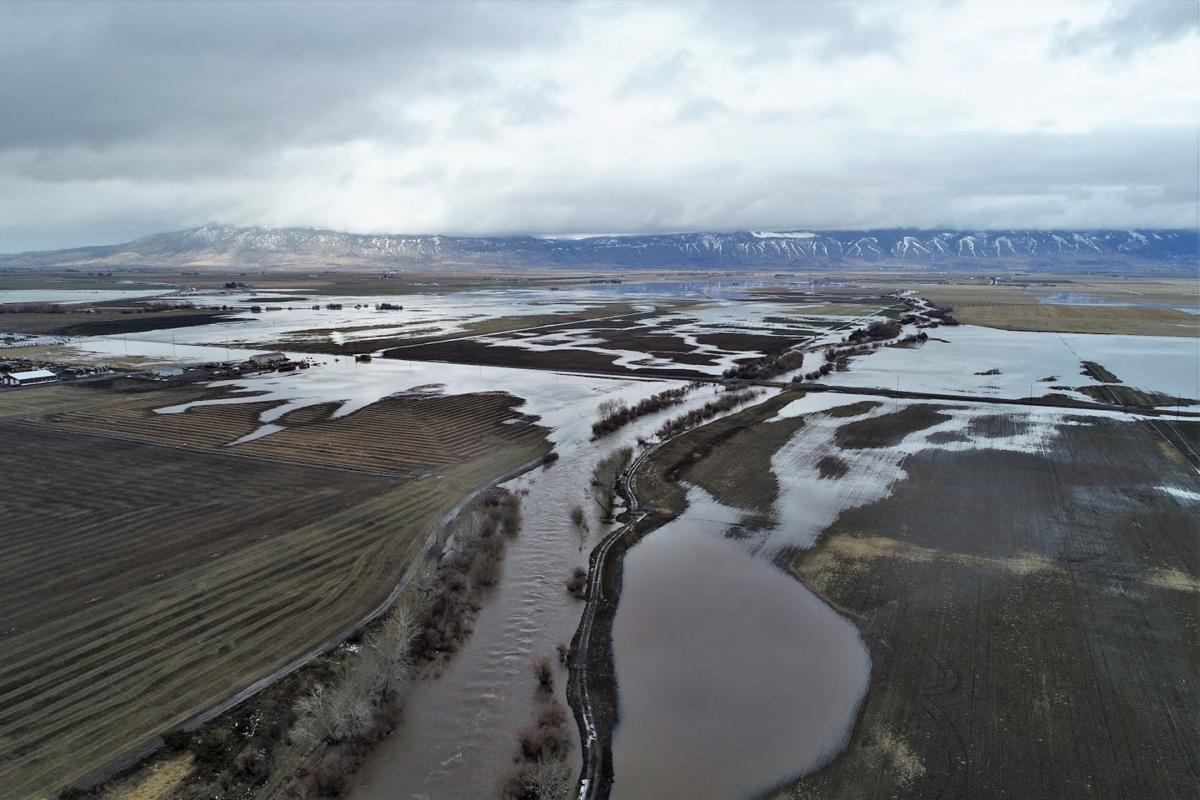 Steady rain Wednesday and Thursday and warmer temperatures led to fast snowmelt and widespread flooding across much of the Grande Ronde Valley. Oregon Gov. Kate Brown on Friday declared emergencies for Union, Wallowa and Umatilla counties due to the massive amounts of high water. 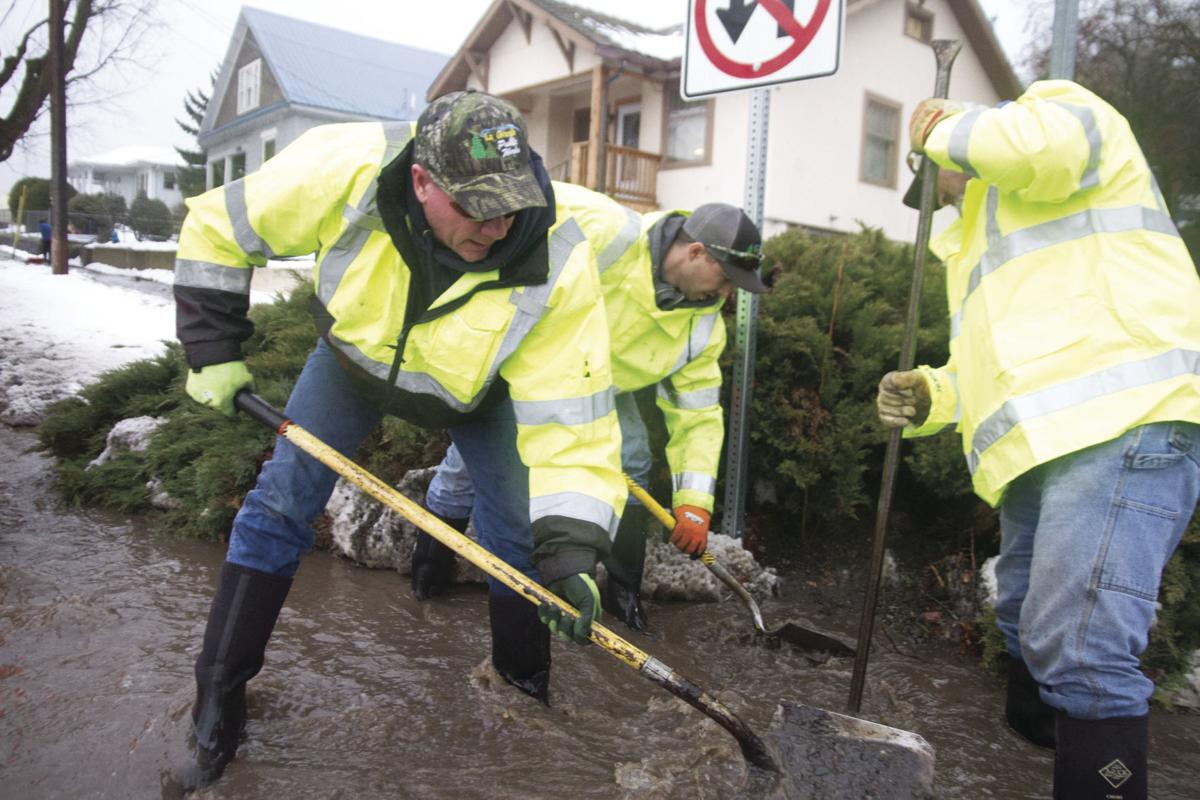 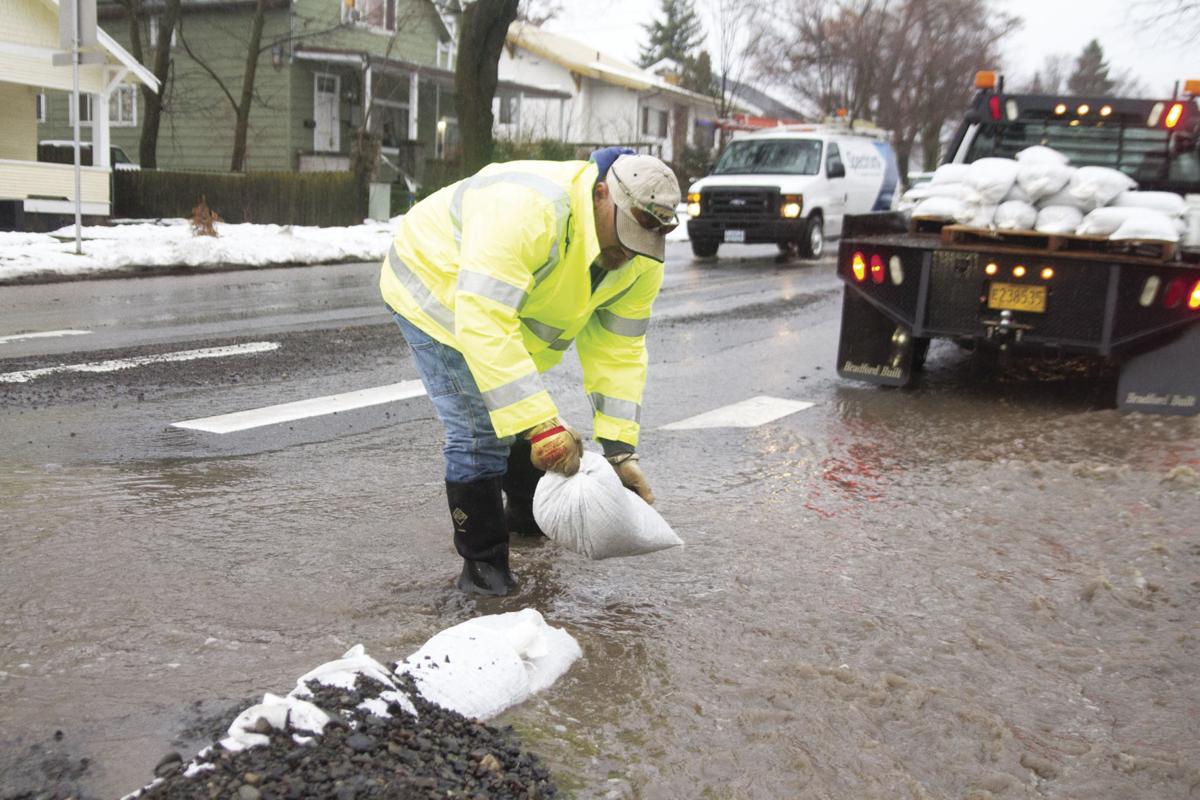 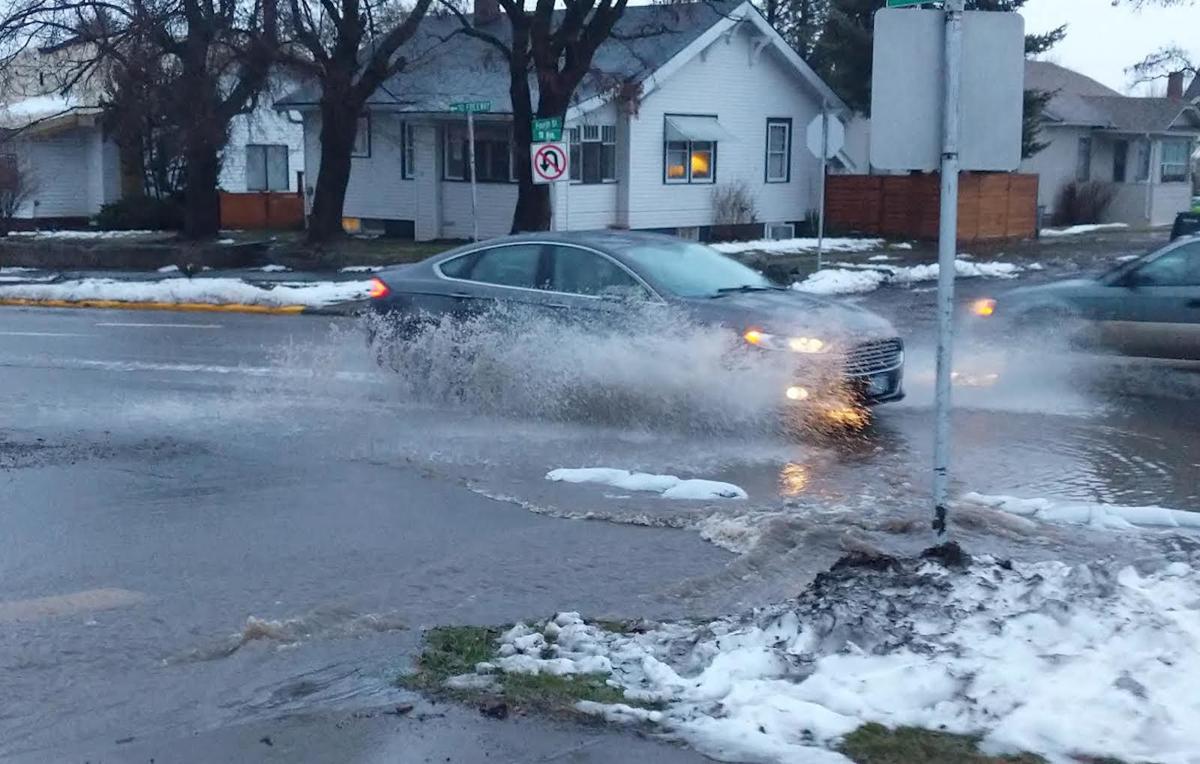 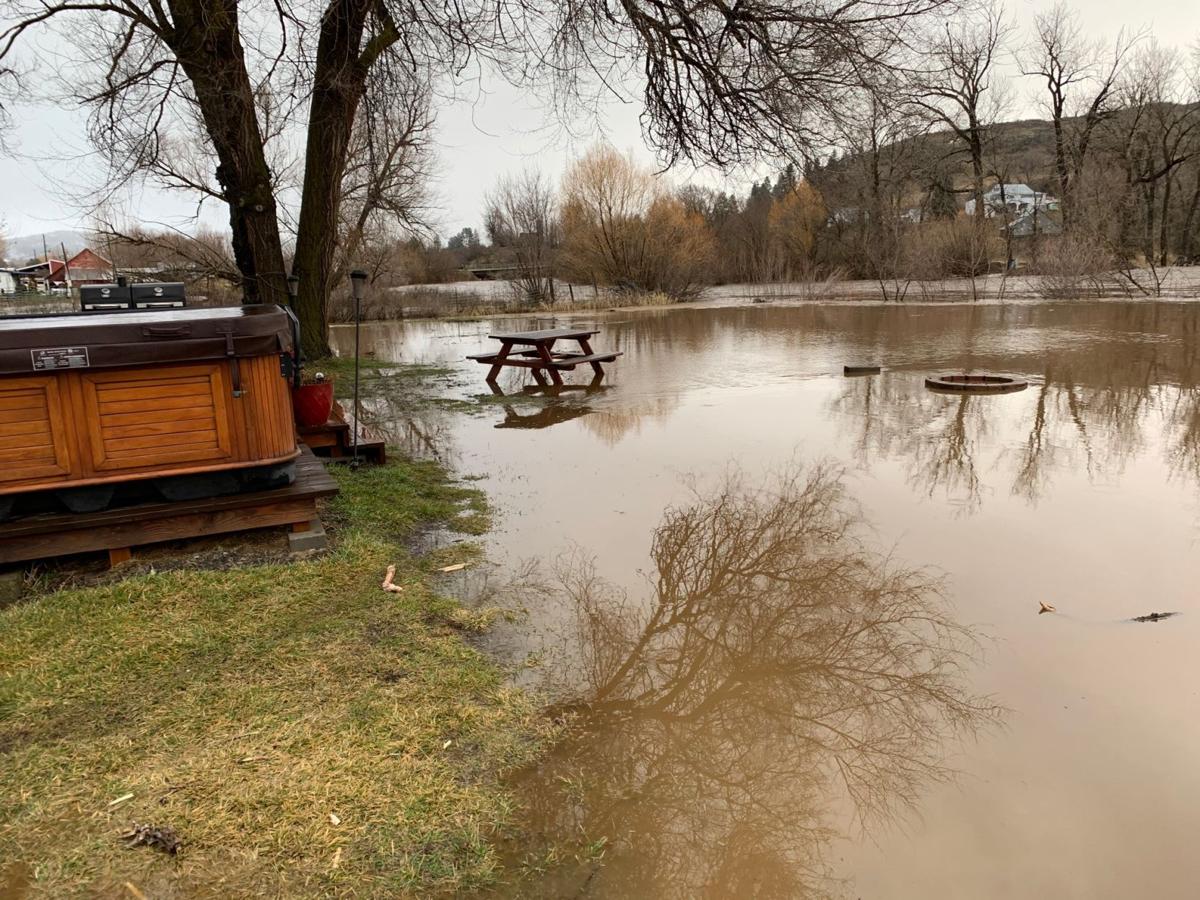 Elgin homes such as this near the Grande Ronde River have been experiencing flooding since Thursday night. 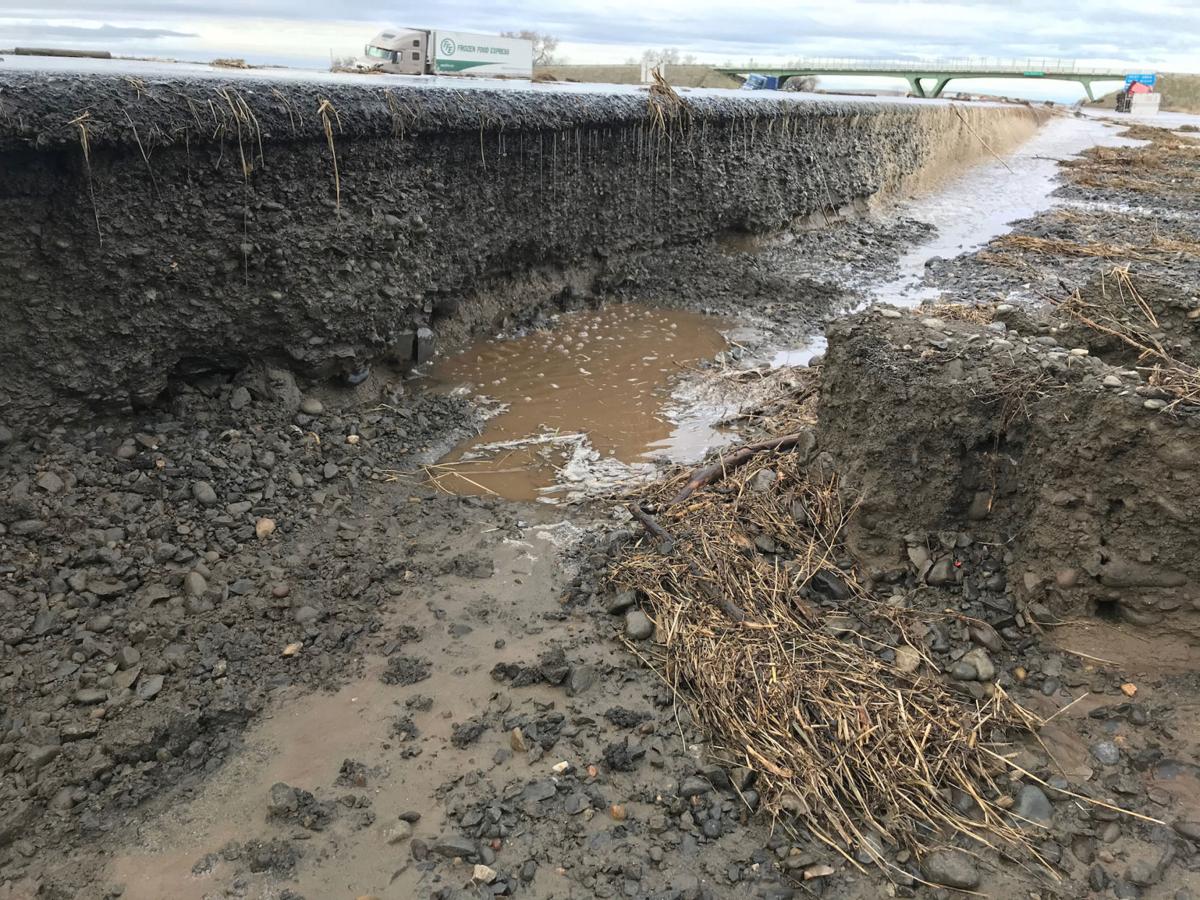 Floodwaters damaged this portion of Intestate 84 near milepost 187 in Umatilla County, prompting the Oregon Department of Transportation to close the freeway.

LA GRANDE — Steady rains Wednesday and Thursday melted the heavy snowfall that covered Union County earlier in the week, resulting in a wet mess in La Grande and flooding near creeks and rivers.

The National Weather Service's flood warning for the Grande Ronde River near Perry affecting Union County and at Troy affecting Wallowa County remains in effect until Saturday afternoon. The high water prompted school and road closures, and people prepared to protect and possibly evacuate their homes. And Oregon Gov. Kate Brown on Friday declared a state of emergency in Umatilla, Union and Wallowa counties due to severe flooding.

"This emergency declaration ensures state resources, emergency response personnel and equipment can be activated to complement critical local resources as this situation progresses," Brown said in a news release.

The governor's declaration came hours after the city of Elgin declared its own state of emergency.

"I went with public works and evaluated the situation at 6 a.m. (Friday) morning," Elgin Mayor Allan Duffy said. "We decided to declare a state of emergency. This allows the city to take whatever action necessary to protect property and life in the city."

That could include evacuation orders. Duffy said if the water continues to rise and the evacuation is necessary, it would affect only a dozen homes. To help protect residents, volunteers filled sandbags at the community center.

"The UPS man who delivers packages in the Elgin area stopped at the Elgin Community Center and worked his lunch break to help fill sandbags," Elgin resident Stanley Johnson said.

The city asked residents to use as little water as possible to help prevent further overflow of the wastewater system. The mayor also requested those who are not in Elgin not to come look due to concerns about safety.

The city has closed all off Hemlock, South Fifth, Sixth and Cedar streets and the Hu Na Ha RV park due to flooding. City public works employees are on-site. Duffy said Philips Creek has had the most flooding and overflowed last night.

"It is a wait and see situation at this point," the mayor said. "Residents are safe, and we will continue to monitor the situation."

The rushing waters affected other areas in Union County.

The Imbler School District canceled classes. Superintendent Angie Lakey-Campbell said the school did not feel it was safe for the buses to drive on the roads with all of the water.

Flooding from Deal Canyon caused an overflow in the sewer system in La Grande, which in turn caused a pipe to burst at the corner of First Street and L Avenue.

The Oregon Department of Transportation issued notices throughout Thursday evening and Friday about road closures. The biggest was the shutdown of Interstate 84 eastbound from about Hermiston to about Pendleton and westbound from Ontario to about Hermiston.

"These closures are expected to remain in place for a significant amount of time to allow inspections of the highway to proceed after the water has receded," according to a news release from the state road department, which on Friday established a circuitous westbound detour near Hermiston. However, ODOT advised the closure could remain in effect between milepost 182 and 188 for up to a week due to breached irrigation ditches adjacent to the road.

•Highway 237 both directions from milepost 0 to 10 between Island City and Cove.

•Highway 244 between milepost 35 and 47 due to two slides that plugged streams and culverts adjacent to the Grande Ronde River.

•Highway 237 both directions from milepost 0 to 10 between Island City and Cove.

•Highway 204 both directions from milepost 1 to 35 between Weston and Elgin to all but local travel.

The closures could remain in effect until Saturday.

Temperatures continued to warm Friday, with La Grande reaching at least 48 degrees. But the melt and run-off looks to slow Saturday, as temperatures cool to the high 30s and high 20s and another round of snow is predicted to fall.