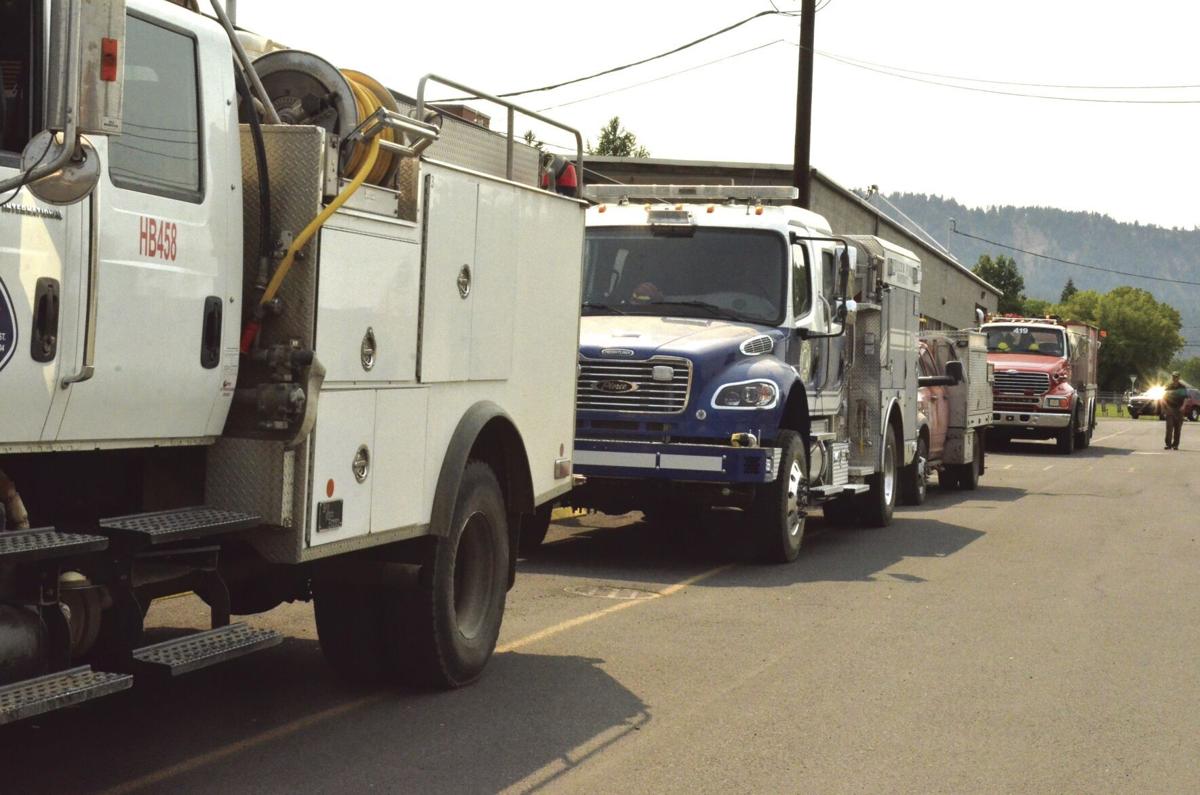 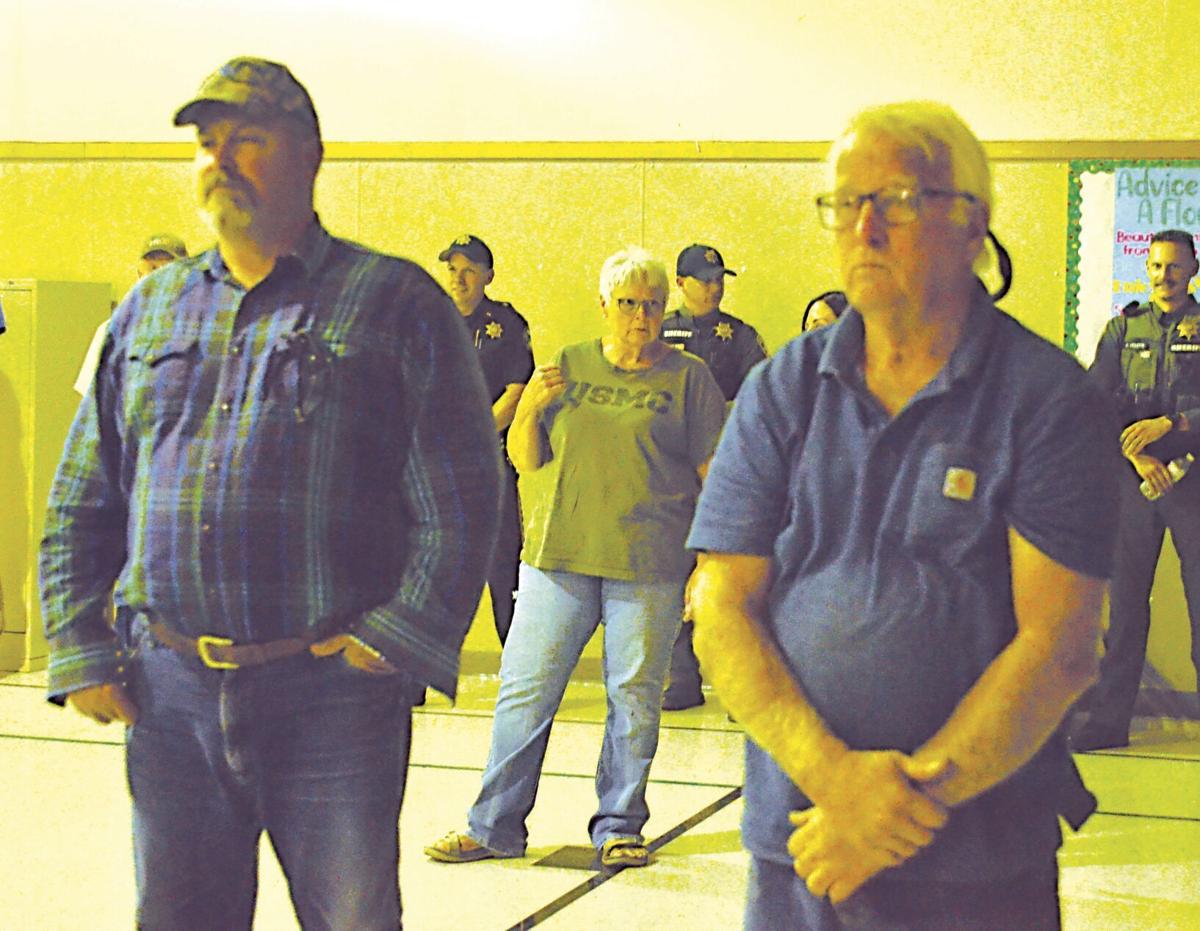 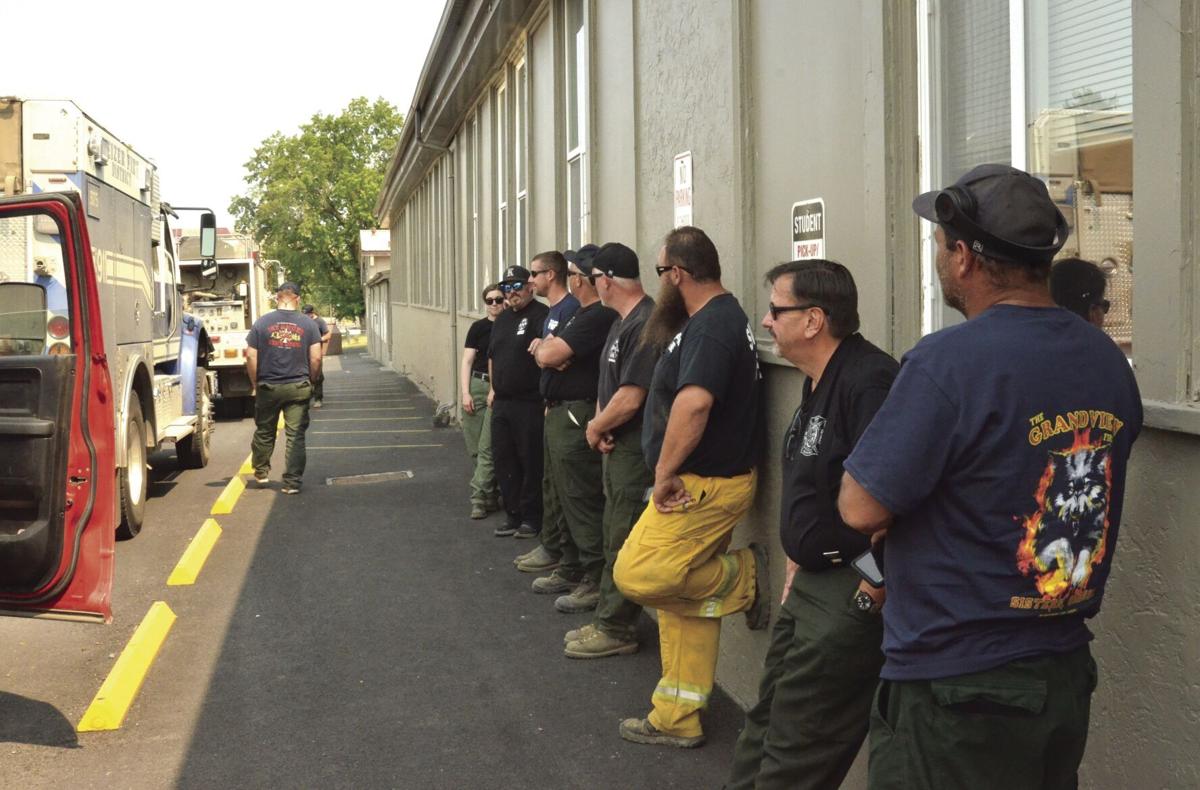 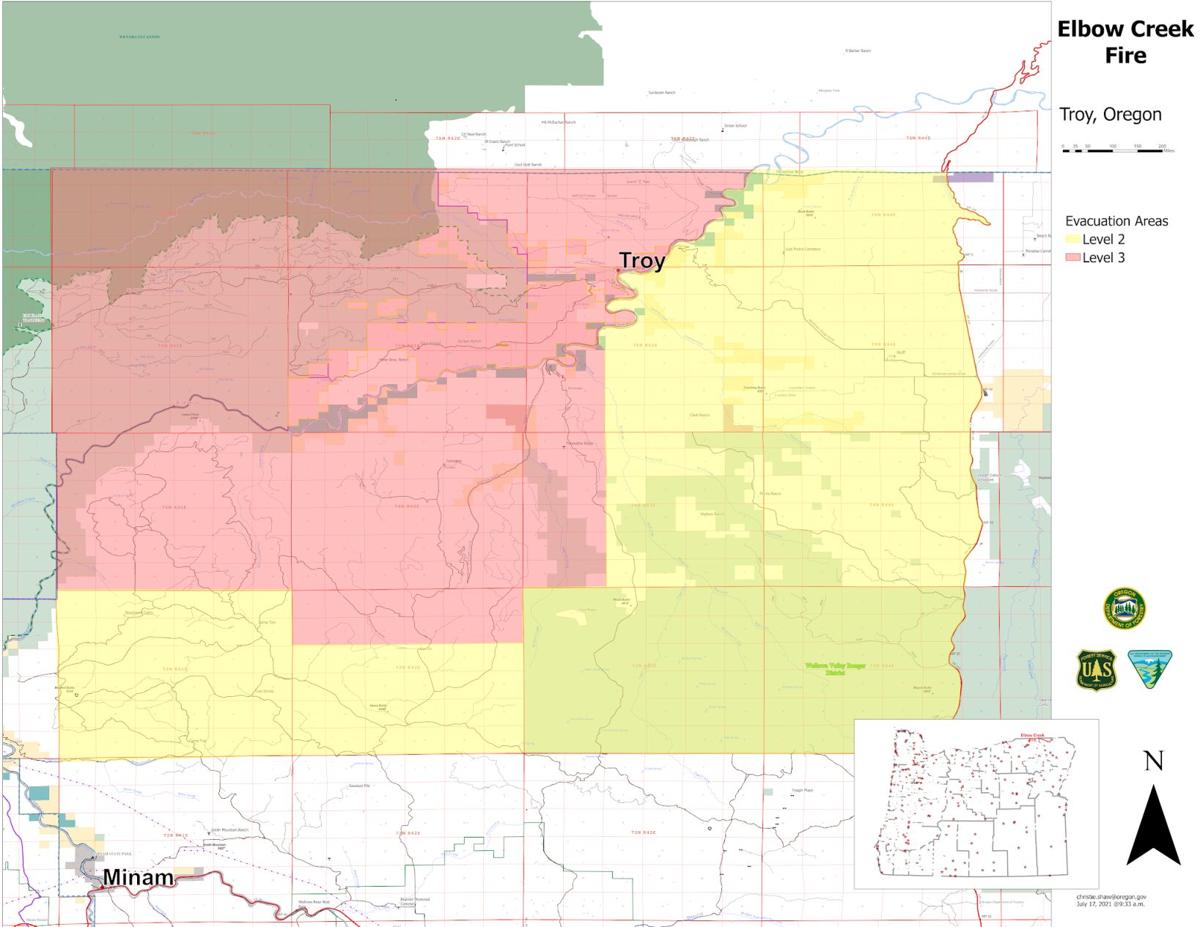 Shown is the most recent set of evacuation levels near the Elbow Creek Fire. Red is Level 3 "Go," and yellow is Level 2 "Get set."

Shown is the most recent set of evacuation levels near the Elbow Creek Fire. Red is Level 3 "Go," and yellow is Level 2 "Get set."

WALLOWA COUNTY — The Elbow Creek Fire burning in Northwestern Wallowa County continued to grow over the weekend, but the fire spread at a slower pace than in the initial 24 hours as firefighters made gains on the blaze.

As of Monday, July 19, the fire had burned 16,432 acres and was about 10% contained. Type 1 Oregon Department of Forestry Incident Management Team 3 took over fighting the blaze Sunday, July 18, after receiving a briefing on the fire July 17.

The Conflagration Act was invoked by Gov. Kate Brown in response to the fire, the governor’s office reported July 17, which led to the Type 1 team being called in. Firefighters from across the state have flocked to Wallowa County, with the task forces coming from Marion, Columbia and Yamhill counties, according to Les Hallman, the deputy incident commander.

As of July 18, the size of the crew fighting the blaze was 343, according to inciweb.nwcg.gov.

Residents in Troy and Eden Bench had been placed on a Level 3 “Get Out” evacuation notice Thursday as the fire quickly grew, reaching 9,000 acres by early Friday. So far, there have been no structures damaged in those areas, Wallowa County deputy Paul Pagano said during a virtual community meeting July 18. Pagano said that a “vacation structure” to the south, though, had been lost.

Pagano is serving as the acting sheriff after the WCSO announced July 17 that Sheriff Joel Fish is receiving medical care for an illness. The county is receiving additional help from the sheriff’s offices in neighboring Union and Baker counties.

“That’s about all it took for me to say we will be there,” he said. “Strong relationships with our neighboring counties is crucial and a priority for my office.”

Bowen said the Union County Sheriff’s Office will help out as long as needed and that the aid will come in the form of deputies voluntarily covering shifts in Wallowa County.

“What’s important right now is that Wallowa County knows we are there to help,” he said.

During the July 18 virtual meeting, Incident Commander Link Smith shared a sobering stat, saying there was “extreme fire behavior” and that there were reports of the fire spreading “1,000 acres an hour” in its early stages. He said it grew despite the best efforts of local crews who battled the blaze early as it was fueled by winds due to it burning in dry, rugged terrain.

The fire, which started near the confluence of Elbow Creek and the Grande Ronde River at about 2:30 p.m. July 15 then quickly spread east along both sides of the river, has been tamped down to some extent. Crews conducted a successful burnout operation July 17 and July 18 near Wildcat Creek to keep it from jumping the waterway, Operations Chief Eric Perkins said during the virtual meeting.

He said, though, that there have been challenges on the fire’s west side, noting “a couple spot fires in Elbow Creek that have been problematic.” He also said a hot spot near Sickfoot Creek to the south has given firefighters issues.

As of July 18, the fire had spread toward Sickfoot Road to the south, had burned in Ward Canyon, and had started to make its way up Eden Bench to the north. At the west end, it jumped Grossman Creek to the south of the Grande Ronde River, ODF officials said Saturday, and was starting to burn near the area of Indian Point.

Town of Troy in good shape for now

The town of Troy appears to be “fine for now,” Pagano said July 18. The fire’s southeast edge, just west of Wildcat Creek, is about 4 miles from the town.

It is still close to Promise, less than a mile away, which is where a spike camp was initially set up.

Wallowa County Commissioners have asked residents and visitors to steer clear of the region to allow firefighters access to the blaze, they said July 17.

The cause of the Elbow Creek fire remains under investigation.

There will also be a Facebook Live/Zoom option for those unable to attend in person.

Closures in Wallowa County due to fire

WALLOWA COUNTY — With the Elbow Creek fire up to 10,941 acres, the Umatilla National Forest and surrounding river areas remain temporarily closed to the public. The announcement was made on Friday, July 16, and campers are being evacuated from the area.