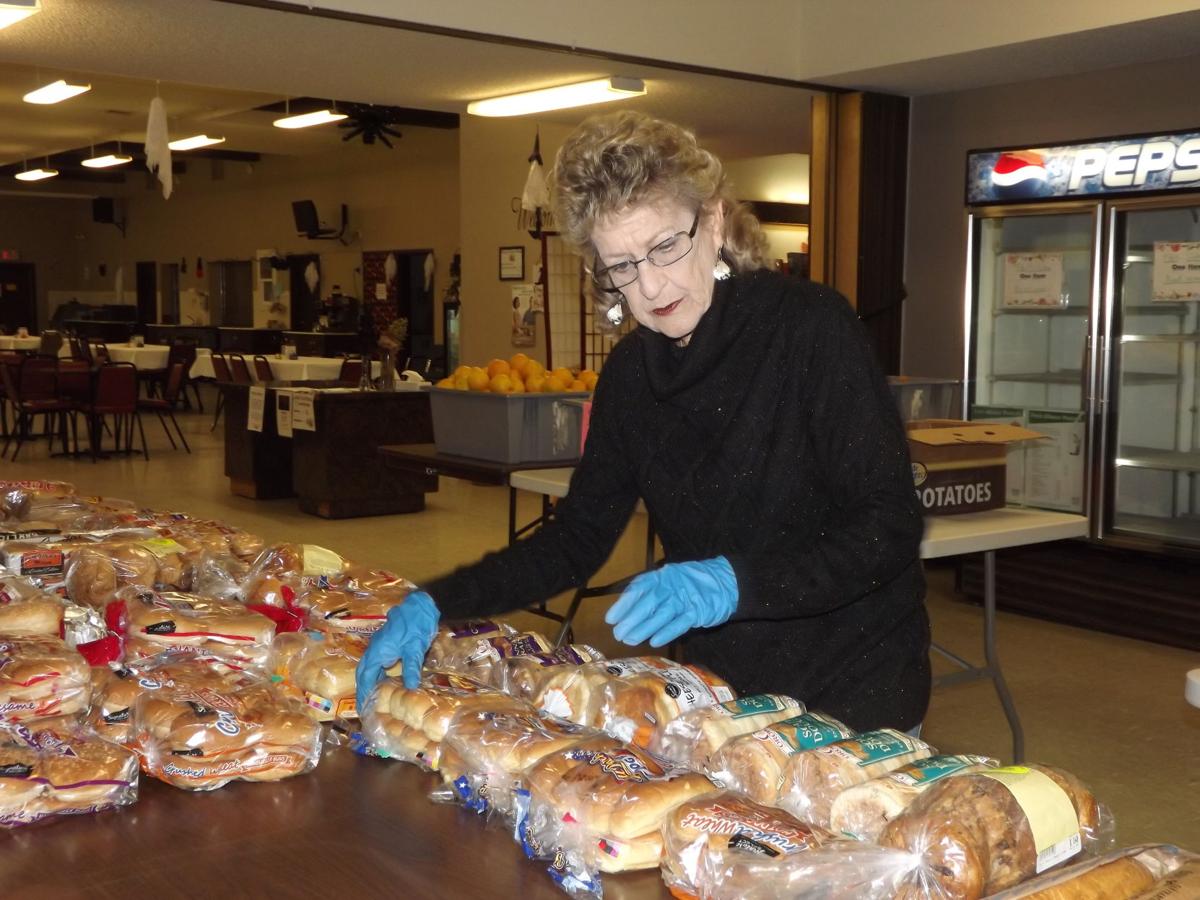 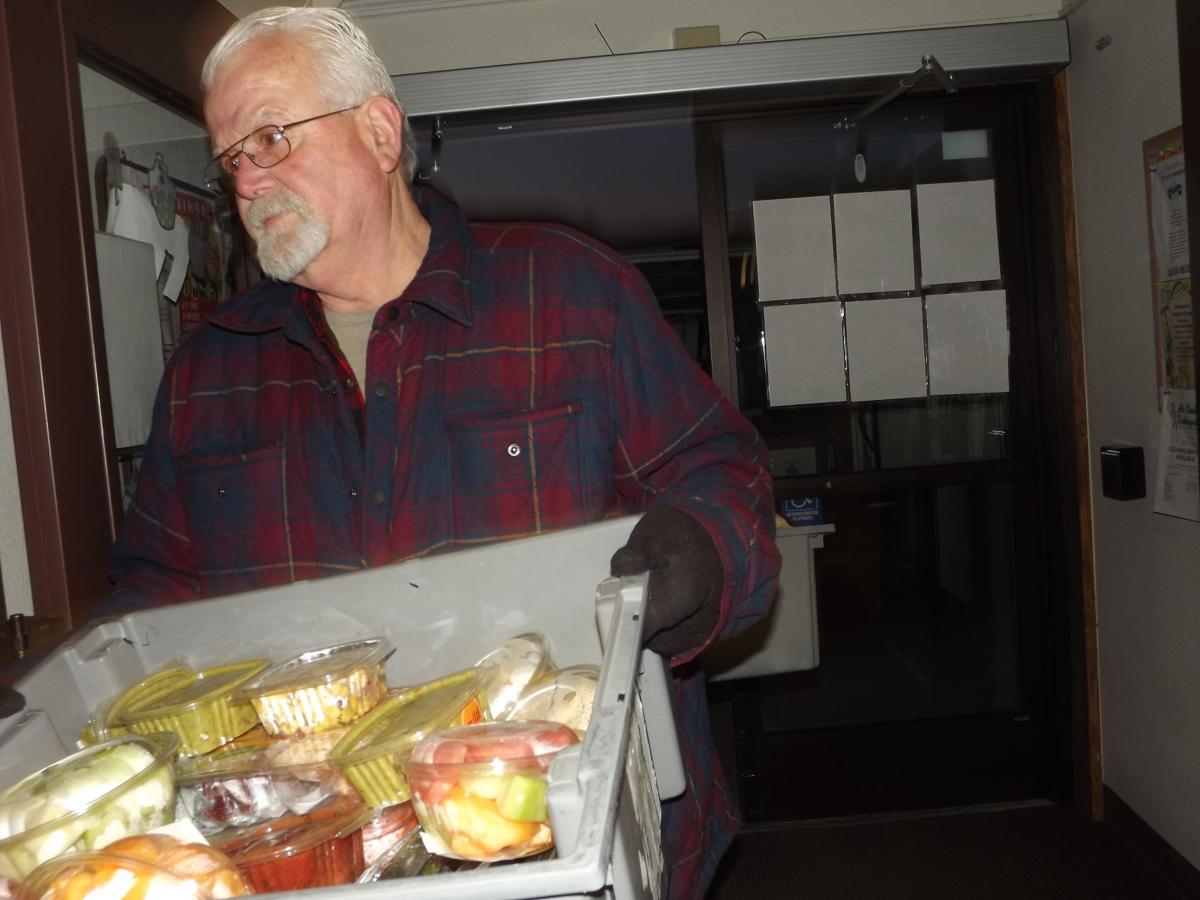 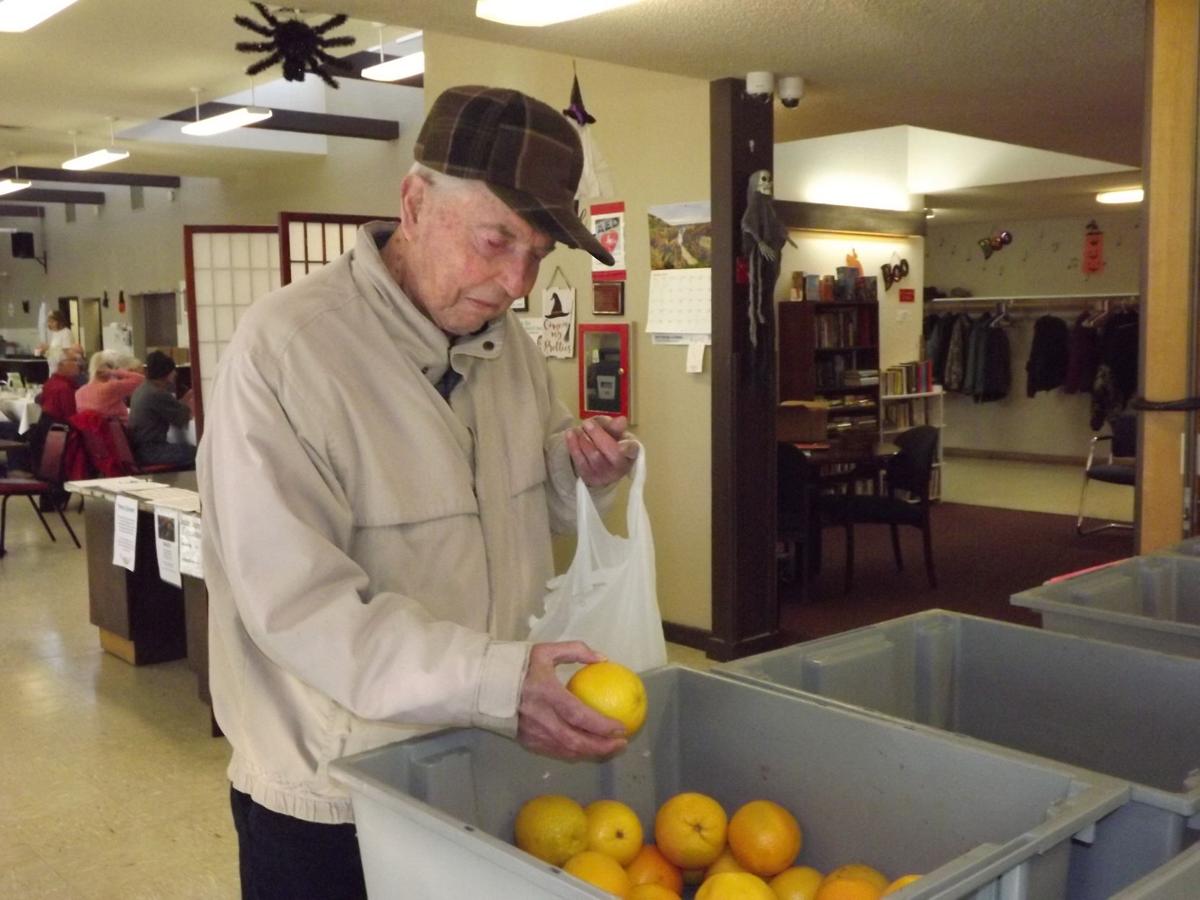 Guy Francy of La Grande picks up apples at Harvest Share on Wednesday.

Andrea Konopacky did not need to hand out laminated number cards at the Union County Senior Center Thursday morning, but she had them ready just in case.

Konopacky is a volunteer leader of Harvest Share, a program that provides free fruit, vegetables, bread and cheese each weekday to anyone who comes to the Union County Senior Center.

Harvest Share has been operating for about 10 years and is proving popular, sometimes a bit too popular, a problem Konopacky is addressing with skill and disarming humor. Up to 27 people are sometimes lined up outside the Union County Senior Center when it opens at 8 a.m. This can result in too many people rushing in at once to pick up the best food available.

To prevent chaos when there are 15 people or more gathered outside, Konopacky now hands out number cards to those waiting. Then at 8 a.m. she calls out five randomly selected numbers at a time and lets those five people come in and pick up food items for several minutes before admitting another group of five, a process that is repeated until everyone is inside.

Konopacky started this process several months ago. Some people grumbled at first, but now those who take advantage of Harvest Share seem to appreciate the system.

“They like being able to come in (in groups of five) and relax while they select their food,” Konopacky said.

She has not had to use the number cards for about two weeks. Konopacky believes this is because colder morning temperatures are preventing people from coming early and waiting outside.

On Thursday morning, a woman asked Konopacky if she would be handing out numbers. Konopacky shook her head no and said good-naturedly, “You have been good kids.”

The food provided at Harvest Share on Thursday included oranges, onions, split peas, potatoes, apples, squash, mushrooms and carrots; a wide assortment of bread items such as English muffins, hot dog buns, sandwich buns and garlic bread; plus cheese and milk. All were available to everyone except the milk, which only homeless individuals can take. The milk is in one quart containers so that it can be easily consumed before it spoils, Konopacky said.

Much of the food provided by Harvest Share is donated by Safeway, Market Place Fresh Foods, Kaufman’s Market, the Oroweat warehouse in La Grande and the Oregon Food Bank. Most of the items are those nearing their best buy dates but are still tasty.  Many are picked up each morning by Andrea’s husband, Steve, and Raymie Blanchard. Steve Konopacky and Blanchard are members of the Community Connection of Northeast Oregon’s regional food bank staff.

Limits are in place for how much food people can take. For example, only one bread package is allowed per person. The limits were implemented about two years ago. Before that, Steve Konopacky said, almost all food would disappear before the senior center closes at 9:30 a.m.

People who regularly pick up food include Guy Francy, of La Grande, a retired scientist who often chooses fresh fruit after eating lunch at the senior center.

“It is a gift every day,” Francy said on Wednesday.

Francy is one of between 150 and 200 people who regularly pick up items at Harvest Share daily.

Each weekday morning, Konopacky spends nearly two hours setting out the Harvest Share food. She rests for a few minutes before opening the senior center’s doors at 8 a.m.

“I take a little break before I let my kids in,” she said.

The banter she has with the people coming in is one of the favorite parts of her work.

“They are a lot of fun,” Konopacky said. “I love my job. The only thing I’ve enjoyed more in my life was raising my children.”