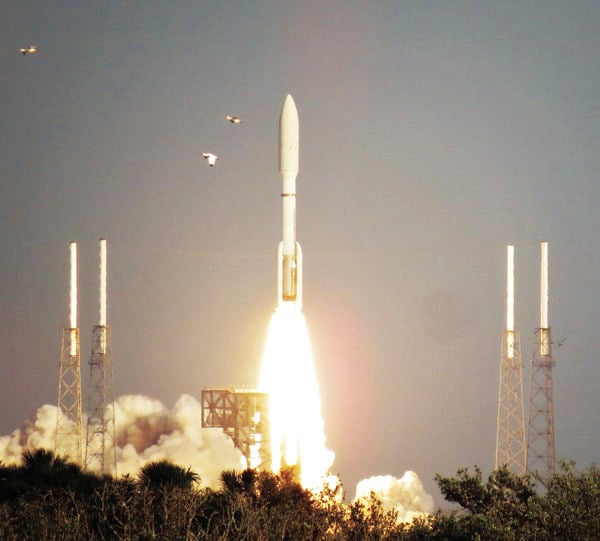 A geostationary operational environmental satellite launches March 1, 2018, from Cape Canaveral, Florida. Even with advanced technology such as the GOES system, the National Weather Service relies on meteorologists when it comes to forecasting weather, especially with the tricky topography in Oregon. 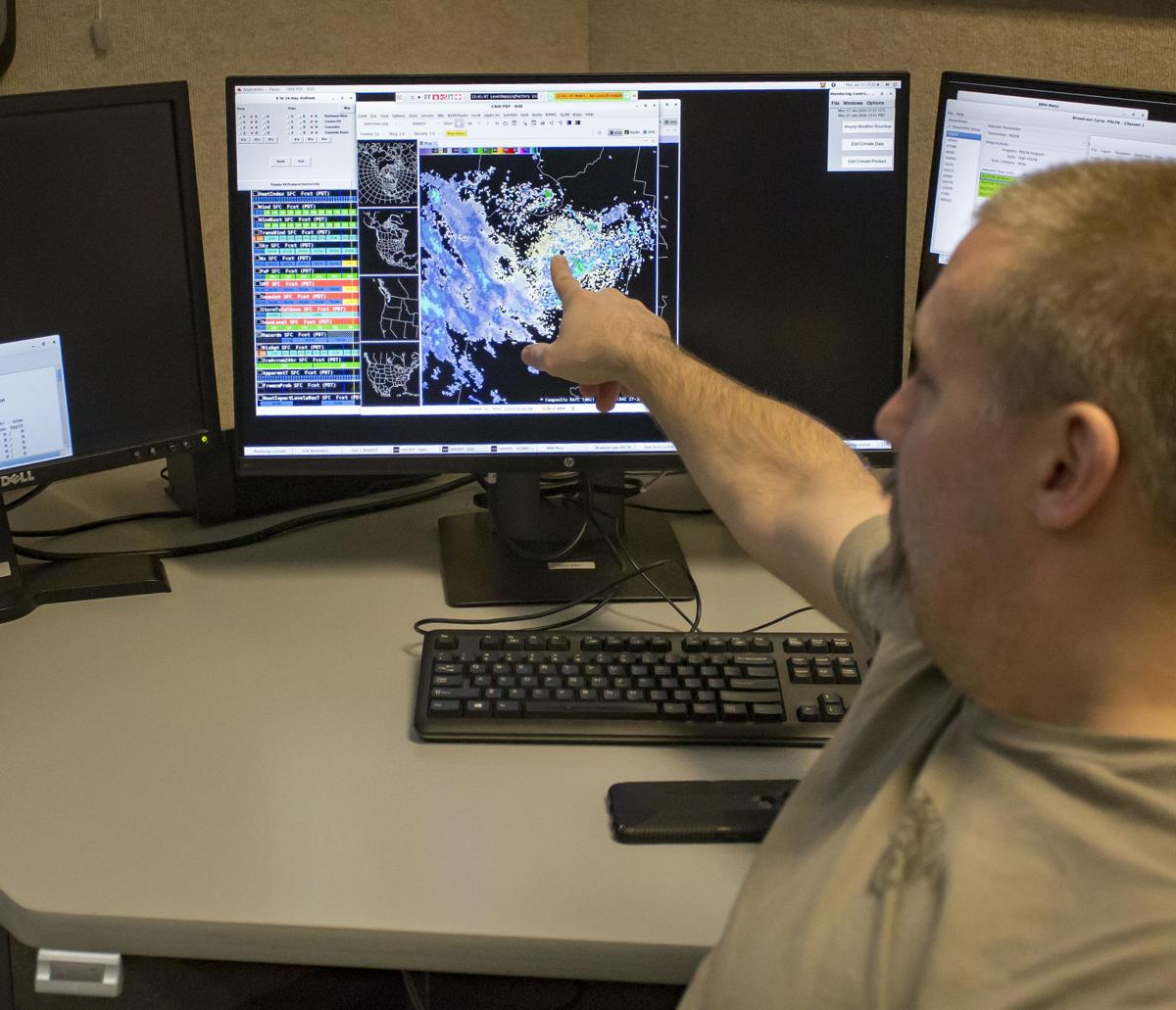 Rob Brooks, a forecaster at the National Weather Service in Pendleton, indicates a blank spot directly above the station where the radar is unable to track weather patterns. 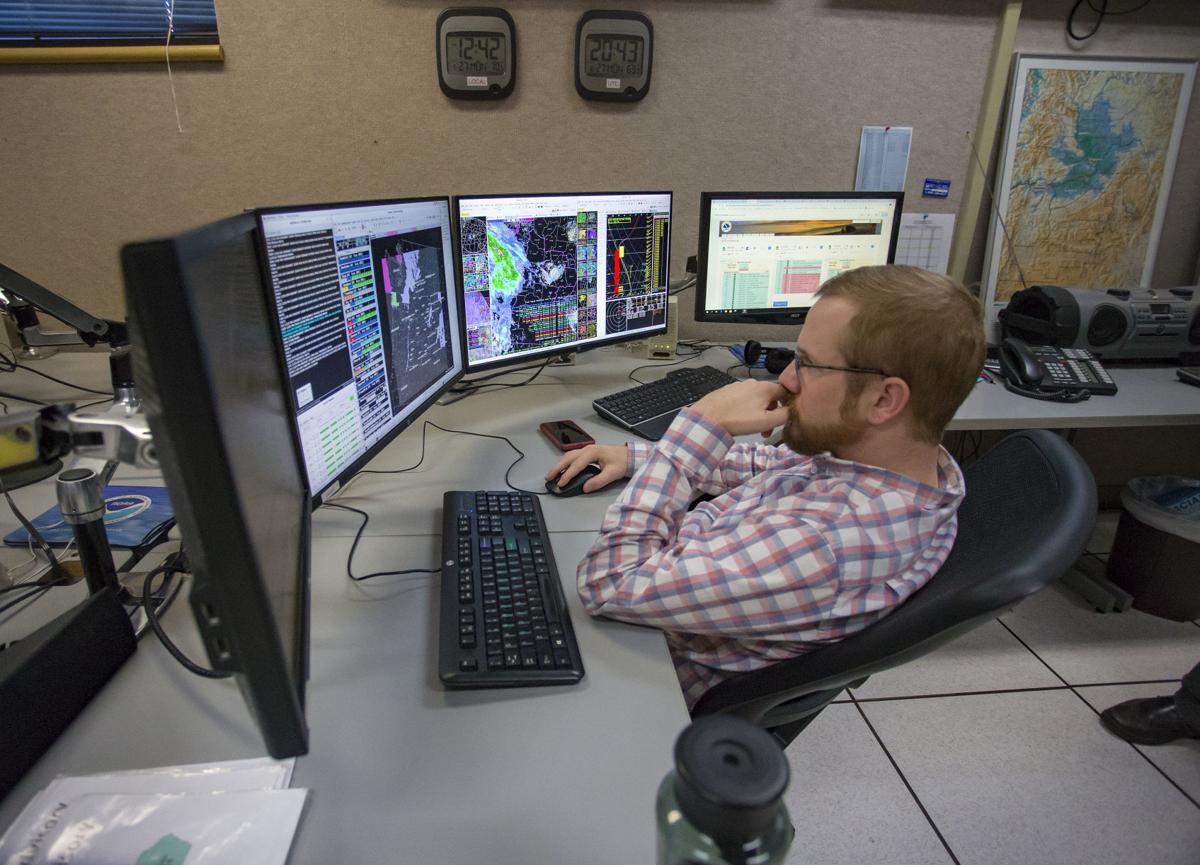 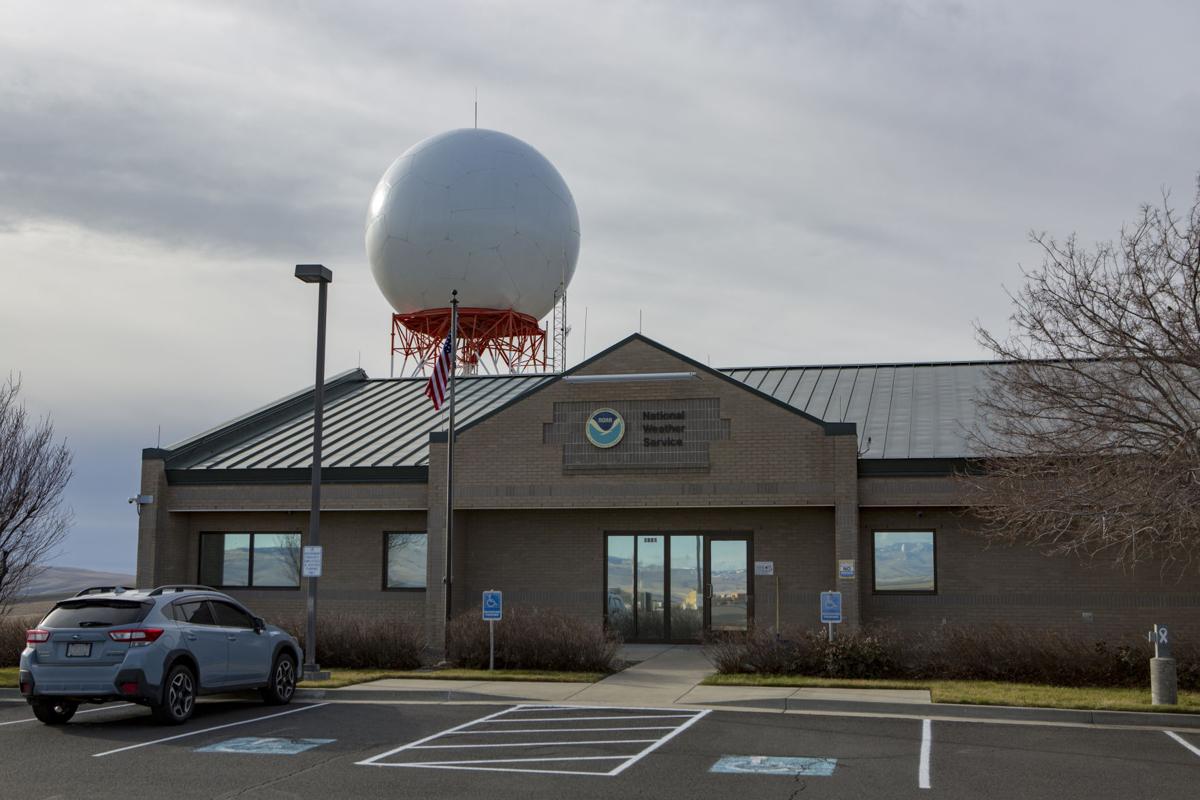 The National Weather Service radar dome looms over the building near the Pendleton airport on Jan. 27, 2020.

This is part two of a two-part story on the local work of the National Weather Service. The first part ran in the Friday, Jan. 31, 2020, edition of The Observer.

But as impressive as the tech is, there are limits.

Marc Austin, the warning coordination meteorologist at National Weather Service in Pendleton, said the station's dual-polarization radar captures weather systems in three-dimensions, except for the "cone of silence."

The radar scans a few degrees in elevation at a time to create the imagery that appears on forecaster computer screens. But the radar cannot scan the space directly above it, thus leaving a blind spot at the top. The crew at the Pendleton office recounted a story of a forecaster who reported all clear when a storm descended due to misreading that spot.

And while the satellites can track a storm forming in the Pacific Ocean days before it drops 6 inches of snow in Eastern Oregon's Blue Mountains — a tempest sprawling thousands of square miles is tough to miss from a vantage point 22,300 miles — they might not detect a local temperature inversion. So twice each day, according to the Weather Service, staff at almost 900 sites worldwide simultaneously release weather balloons.

The balloons are latex or neoprene and filled with hydrogen or helium and carry sensors to about 100,000 feet up.

Jay Breidenbach, Austin's counterpart at the National Weather Service office in Boise, which covers Baker, Malheur and Harney counties in Oregon, explained those sensors record and relay temperature, humidity, wind speed and direction and more that help meteorologists fine-tune forecasts. The balloons yield what he described as an extremely detailed "vertical profile" snapshot of the atmosphere — something that much more sophisticated devices, such as orbiting satellites and the Doppler weather radar, can't deliver. The balloons determine, among other things, the freezing level, which affects at which elevation snow will fall.

Computer models also have improved steadily over the past couple decades. That's due in part the Geostationary Operational eEnvironmental Satellite system, which vastly increase the amount of data the supercomputers chew on before spitting out their predictions. The $10.8 billion project is launching four satellite into stationary positions over the Earth from 2016-24.

Austin said just five to 10 years ago, weather forecasts beyond four days were suspect, but thet technology has stretched that to perhaps seven days. Still, the models have gaps.

"What the models tend to overlook is the topography," Austin said.

Austin said he has worked in four Weather Service offices across the nation, and out of the four, Eastern Oregon is the most difficult to forecast. The massive Cascade Mountains through central and western Oregon, the Blue Mountains and Eagle Caps in the east, the long Columbia River Basin, all combine to make predictions challenging. Eastern Oregon ’s arid nature also plays a big role.

"You get more extreme weather with drier air mass," he said.

Models also fail to capture the local effects of weather. The Grande Ronde Valley appears broad if you drive through it, but on a geographic scale, the valley is small, too small for the graphic resolution of the models.

A weather system this week predicts some high winds over the Grande Ronde Valley, Austin said, but the model is likely to downplay the severity of the winds, which gain momentum as the high pressure moves through the narrower channel of the land. Austin said the forecasters in the Pendleton office will probably increase the wind speed 25-30% for over the computer predictions.

The 12 operational forecasters and three mangers in the Pendleton office are all meteorologists, and some have been there for years, Austin said. They know local weather patterns and can help predict what is likely to occur and provide crucial estimates where the models are lacking.

The downslopes of the Cascades and Blue Mountains, for example, Austin said, are places where models don't track well.

Cold air is heavier than warmer aim, so cold air descends the slope. During storms, wind gusts in Pendleton could reach 50 mph, he said, but the wind at Cayuse at the foothills of the Blues a few miles from Pendleton can reach 70 mph.

"That's just something models are notoriously bad at picking up on," he said.

But the forecasters at Pendleton know this happens, so they build that into forecasts. That pattern recognition can matter a great deal throughout the Blues, where fresh powder snow and high winds lead to the white-out conditions making driving dangerous, such as occurred on Jan. 15.

La Grande setting in a valley also leads to forecasts that don't line up with actual outcomes. The models take temperatures into account to help predict snowfall amounts and can show La Grande colder than what it actually is, leading to estimates of 8 inches of snow when perhaps half of that falls.

"Now it can go either way," Austin said, thus the valley has a "degree of uncertainty" when it comes to forecasts. These situations, he said, are where the human element makes such a difference.

Plenty of other humans in Eastern Oregon rely on that element. The National Weather Service in Pendleton sends daily weather briefings each morning to 300 email accounts, and some of those accounts are group emails. The briefings reach thousands of people, Austin said, from school districts to road departments to wildland firefighters.

The messages exemplify what the Weather Service — from the satellites to the forecasters — is about.