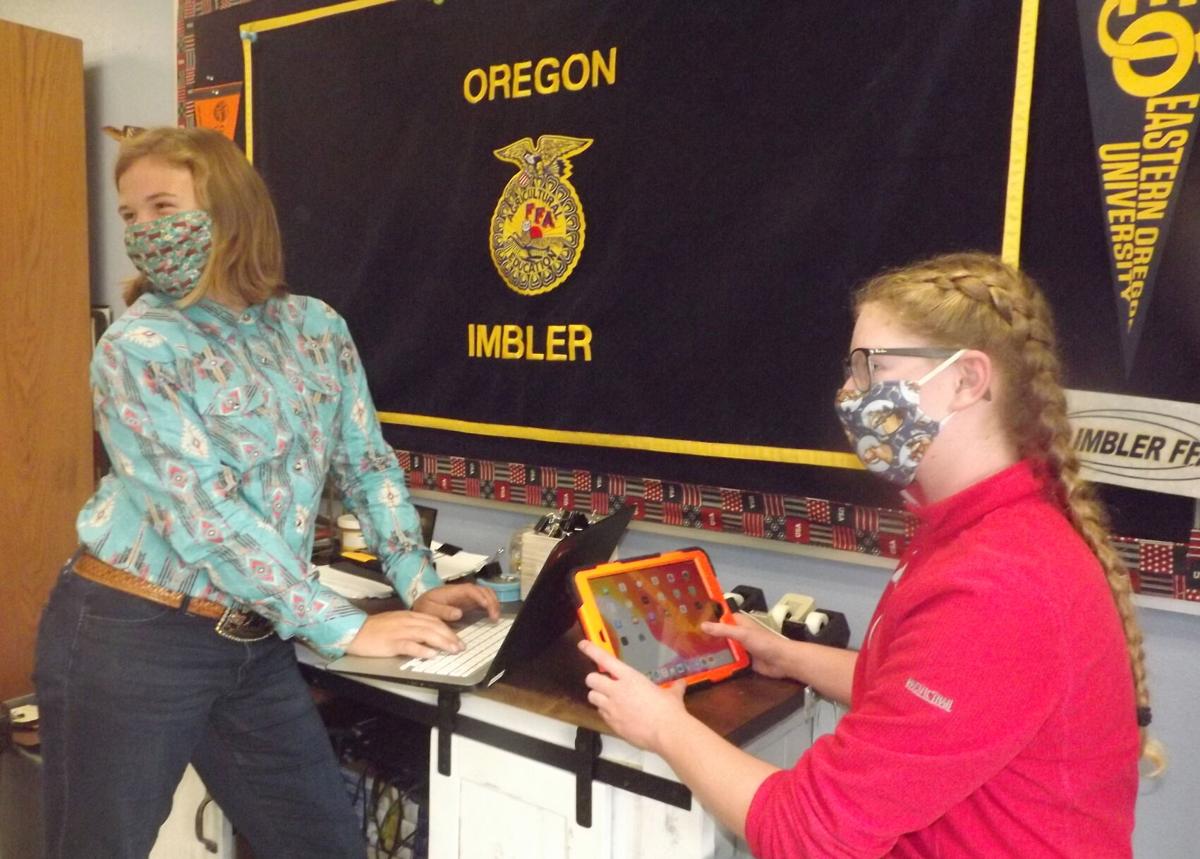 Imbler School District eighth graders Jayda Cant, left, and Rachael Stirewalt talk with some of their teachers Wednesday, Sept. 16, while looking up from their computers after school. The two students are competing in FFA at the national level. 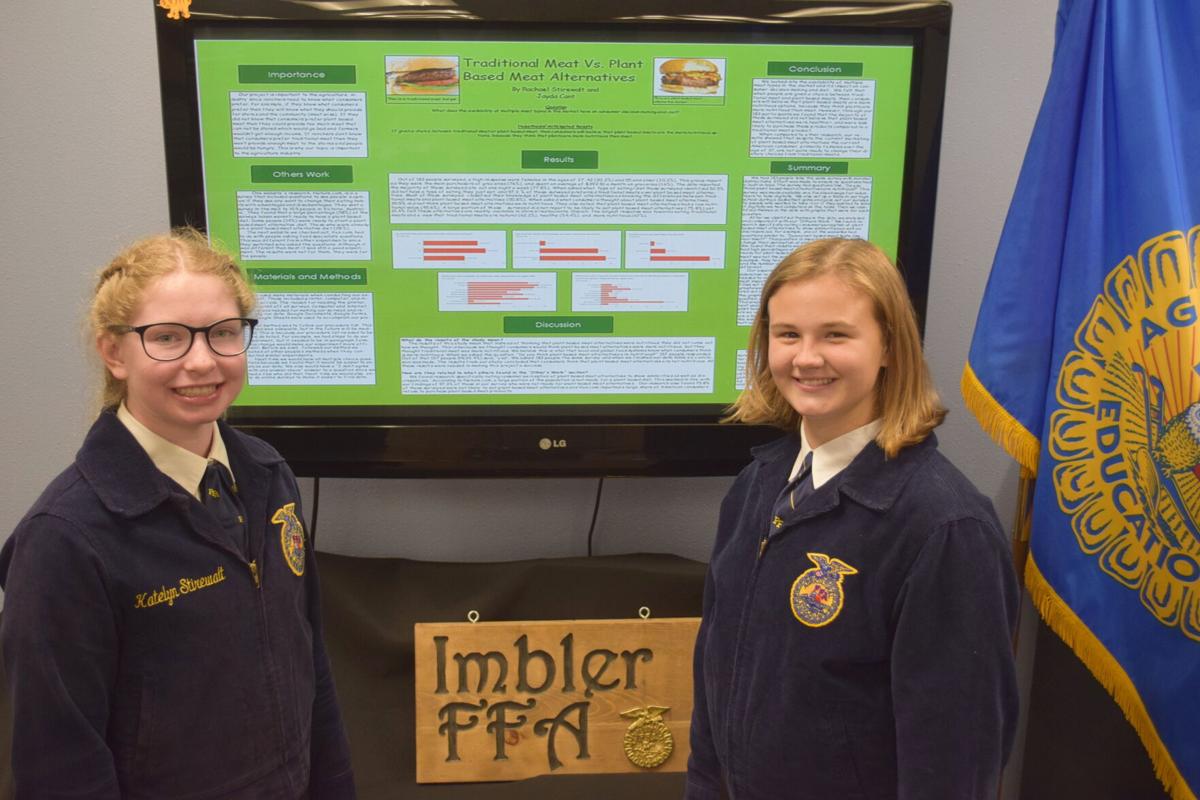 Imbler School District eighth graders Jayda Cant, right, and Rachael Stirewalt pose in front of their presentation on “Traditional Meat vs. Plant-Based Meat,” which earned them a spot as national FFA finalists.

Imbler School District eighth graders Jayda Cant, left, and Rachael Stirewalt talk with some of their teachers Wednesday, Sept. 16, while looking up from their computers after school. The two students are competing in FFA at the national level.

Imbler School District eighth graders Jayda Cant, right, and Rachael Stirewalt pose in front of their presentation on “Traditional Meat vs. Plant-Based Meat,” which earned them a spot as national FFA finalists.

IMBLER — Imbler High School’s FFA chapter has a long and decorated history, one dating back at least to the 1930s when Virgil Choate became its first member to receive the FFA’s state farmer degree.

Now a pair of bright eighth graders are adding luster to the chapter’s legacy — Jayda Cant and Rachael Stirewalt. The pair made the national FFA finals in the agriscience category for the junior high level due to the quality of a report they did on how 183 people they surveyed felt about eating meat as opposed to a plant-based product that has the taste and texture of meat.

The results of their survey were overwhelming, indicating 97.3% of the respondents prefer actual meat to plant-based meat.

The students conducted the survey among people attending Imbler High School basketball home games in January and individuals answering the questionnaire via Facebook. Stirewalt was impressed with how gracious spectators were at the basketball games.

“They really wanted to help us,” said the eighth grader, the daughter of David and Sherry Stirewalt.

After conducting their research, the girls examined similar surveys around the world and found the majority of people are not ready for plant-based alternatives to meat. However, they found no surveys with as dramatic opposition to it as their work.

Cant and Stirewalt did their project with guidance from Imbler High School agriscience teacher J.D. Cant, Jayda’s father, and science teacher Nancy McDonald. Both were impressed with the students’ hard work and attention to detail.

“They are top-notch students who strive for excellence,” McDonald sad.

J.D. Cant said he believes the students’ survey might have indicated an exceptionally strong preference for real meat because Imbler is a ranching community, and plant-based alternatives might be seen as a threat to the local economy.

The survey addressed a serious subject, but the eighth graders added a light touch to some of the answers respondents could chose from. For example, the first question asked people about their eating lifestyle type. They had a choice of 10 answers, including omnivore, vegetarian, Atkins, raw food and the last one: “I don’t have a type, I just eat.”

It took Cant and Stirewalt a short time to conduct the survey, but they spent weeks studying the responses and writing a 12-page report on the findings. The report so impressed FFA judges at the state level that the Imbler team advanced to nationals. This meant they put in more hours editing the report before resubmitting it, said Cant, whose mother, Audrey, is a first-grade teacher at Imbler Elementary School.

Cant and Stirewalt recently learned they are among 10 national finalists. Normally the students would attend the national FFA convention in October at Indianapolis, where they would appear before judges who ask questions about their report and then determine the top placers based in part on the quality of their answers.

But this year there will be no FFA convention due to the COVID-19 pandemic. Instead, Cant and Stirewalt and all of the national finalists had to create five-minute videos about their projects for judges.

The video also took numerous hours to make. Cant and Stirewalt shot the video in a single take instead of taking multiple recordings and splicing them together. The Imbler team will not know how they did until the national FFA results come out Oct. 29.

Imbler School District eighth graders Jayda Cant and Rachael Stirewalt are among 10 Imbler FFA students who participated in the national agriscience competition. Cant and Stirewalt are finalist, and the other Imbler students won bronze medal status because of the quality of their reports.

Jack Fisher — "The Effects of Thawing Temperature on Bovine Spermatozoa"

Henry Treat — "How Temperature Affects the Life of a Battery?"

Cassidy Ritter and Paige Allen — "Sawdust VS. Hair: Which One Absorbs The Most Oil?"