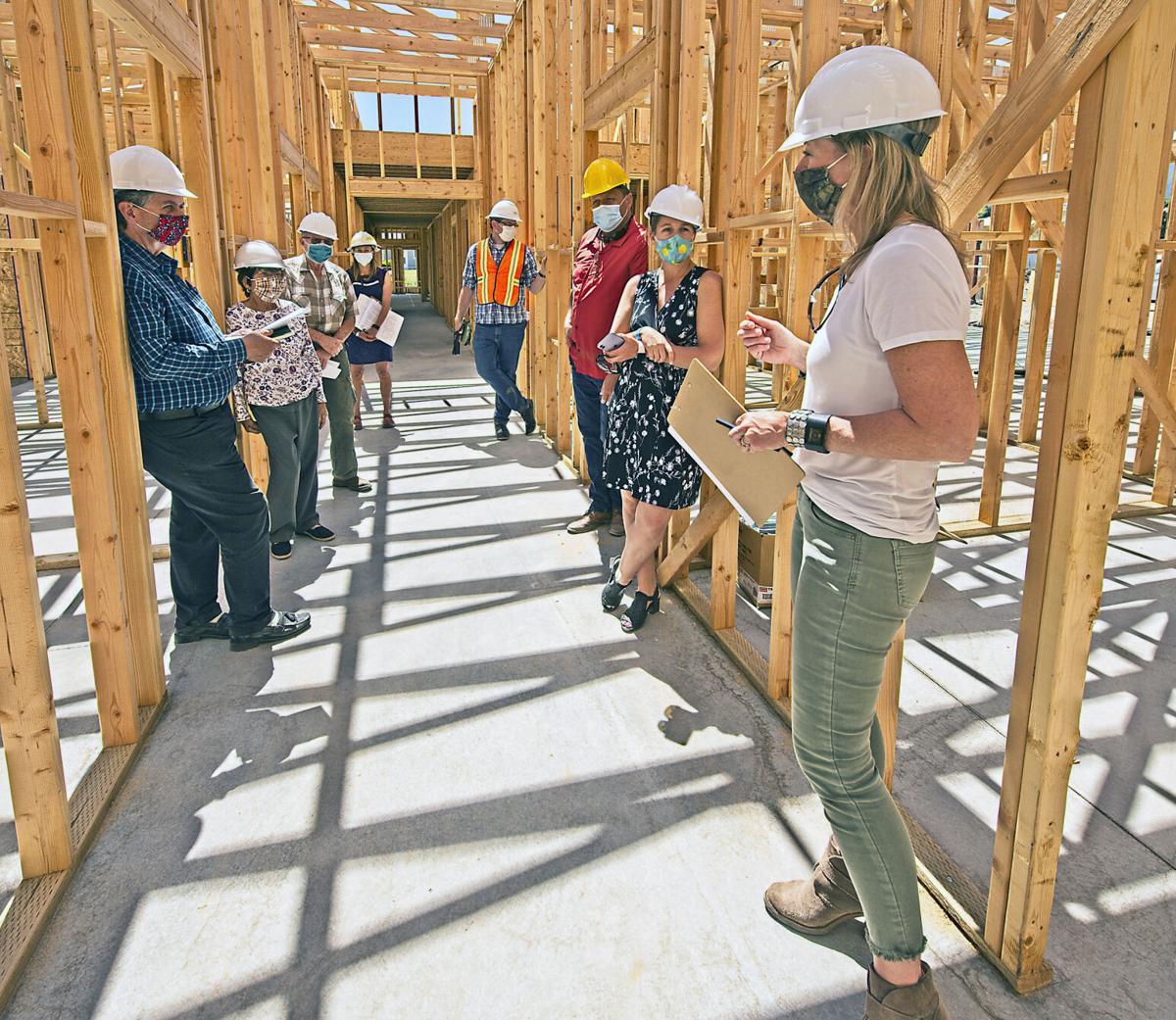 Chantay Jett (right) leads a tour for donors and others through the still-under-construction Hearts for Health Integrated Health Care facility in Enterprise. 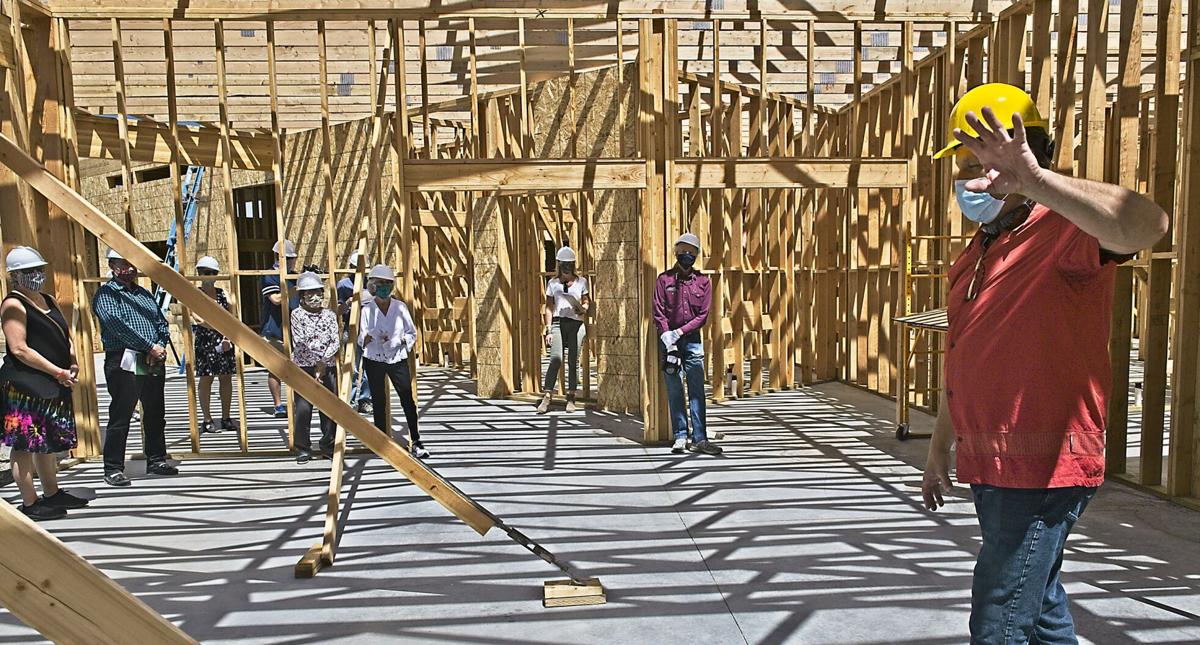 Lem McBurney explains how the teaching kitchen in the Hearts to Health Integrated Health Care facility will help community members in need. 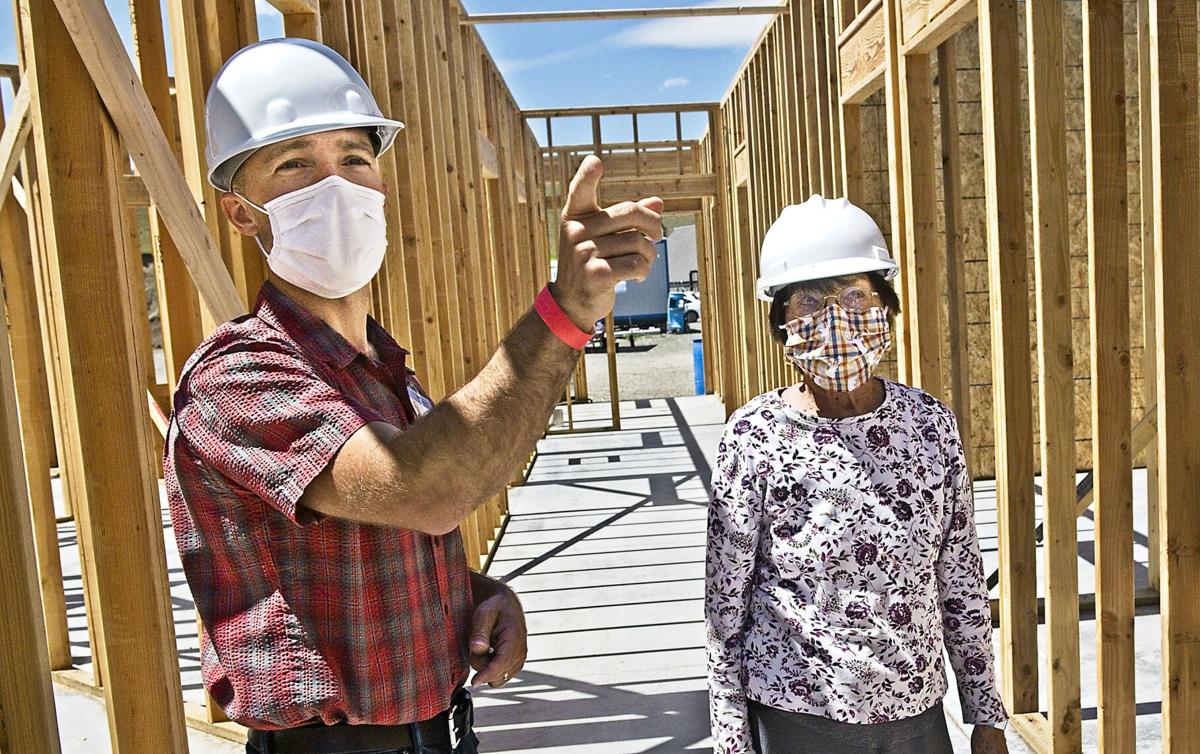 ENTERPRISE — The framing is done and the walls are going up on the new $7.4 million, 22,000-square-foot Hearts for Health Integrated Health Care facility adjacent to Wallowa Memorial Hospital in Enterprise.

Despite the apparent loss of a $2.5 million grant funded by the Oregon Lottery, construction will continue, and the building will be finished.

The grant was withdrawn after a drastic shortfall in lottery revenue due to COVID-19-related closures.

“We have a bridge loan that covers the building costs,” said Wallowa Valley Wellness Center Executive Director Chantay Jett. “We are going to keep looking for other sources of funding. And we’ve talked with Sen. Bill Hansell and Rep. Elizabeth Steiner Hayward. They know the situation. They are working to help us. But even in a worst-case scenario, we have the funds to finish this project. We’d just rather not have to assume that much debt.”

Winding Waters Community Health Center CEO Nic Powers said, “We have a lot of support from organizations around the state, including the Oregon Health Authority. We feel confident that additional funding can be found.”

Hansell, R-Athena, had helped find funding for what he considers an important project. He was enthusiastic about the facility but is cautious about reinstatement of funding for lottery-based grants across the board.

“Right now, the current authorization is for all projects or none,” he said. “We can’t pick and choose, based upon what the law that we passed says.”

Hansell said he is hopeful that lottery revenue will pick up again soon, raising enough revenue for the lottery to issue bonds as it had planned. He also noted that there will be a special legislative session to make cuts that will meet the anticipated overall budget shortfall.

“Right now, it appears that the budget will be upside-down to the tune of about $4 billion,” Hansell said.

“It’s not overly encouraging at this point,” he said. “With that big a budget cut, it’s going to be real difficult to find any money from the lottery or other agencies to help out even the best projects.”

The facility is a joint project of Winding Waters Community Health Care Center and the Wallowa Valley Center for Wellness. Construction started in March 2020. Completion is set for the fall of 2021.

It is unique because the facility will provide physical, mental and dental care for patients all under one roof. An integrated team of specialists that understands and treats the multiple causes of each health problem will provide care.

“We know, for example, that dental health plays a role in cardiac conditions,” Powers said in a previous conversation. “So it makes good sense to have dentists communicating with physicians when it comes to patient care.”

This full integration of care makes the Hearts for Health facility a pioneering concept in treatment, Powers said. So there’s great interest in ensuring its completion.

On Friday, July 17, Jett, Powers and owner’s representative liaison Lem McBurney led tours of the construction site for donors and others interested in the building’s progress. More than $600,000 has been raised locally through gifts and Hearts for Health fundraisers for the $7.4 million structure.

The tour began in the building’s lobby, which at the moment is an empty concrete pad roofed by the sky. The space, McBurney said, will include seating. But as patients enter the lobby, they’ll be greeted by the medical equivalent of a concierge.

“This will be a person who can greet whoever comes in quietly and privately, to determine what they are needing and help guide them in those directions. If it’s a busy time of the day, they’ll have two people working that concierge-type position,” he said. “The idea is to make your introduction to care more seamless, and less ‘Get in line, take a number,’ and make it more inviting and less stressful. There’s no gap in the kinds of services we’ll provide.”

McBurney guided the flock of donors and interested citizens into the roofless community room, which was defined only by open, studded walls. It will include a resource center, a family room and a place where families can go outside into a protected, landscaped area.

The conference room will accommodate up to 100 people for conferences, meetings and could be rented for birthday parties and other social events. State-of-the-art electronics are part of the design.

The spacious kitchen is planned more as a teaching facility than as a place that will prepare food. It will include technology to provide online learning, McBurney said.

“The intended students,” McBurney said, “include folks who might need some nutritional coaching, or those who are getting used to a newly recommended diet or dietary changes. In addition, we’ll have a washing machine, a shower, and other facilities so that people who might not be living in a home can take advantage of them while they are here.”

The building is designed so that services and personnel can flow naturally from work area to work area. Staff offices are in the rear of the structure, with easy access to both the outside and parking and to the areas where they will work and engage with patients. The design includes every kind of patient care imaginable, including physical, mental and dental health.

Walls between rooms where physicians and councilors will meet with patients are extra thick, Powers said, so that they will be relatively soundproof and physician-patient conversations will be truly confidential. The building plans also show space for future surgical galleries.

“There was a lot of planning, and then more planning, that went into the building design,” Jett said. “In the end, (including future plans) was a cost savings because we shouldn’t have to do any change orders.”