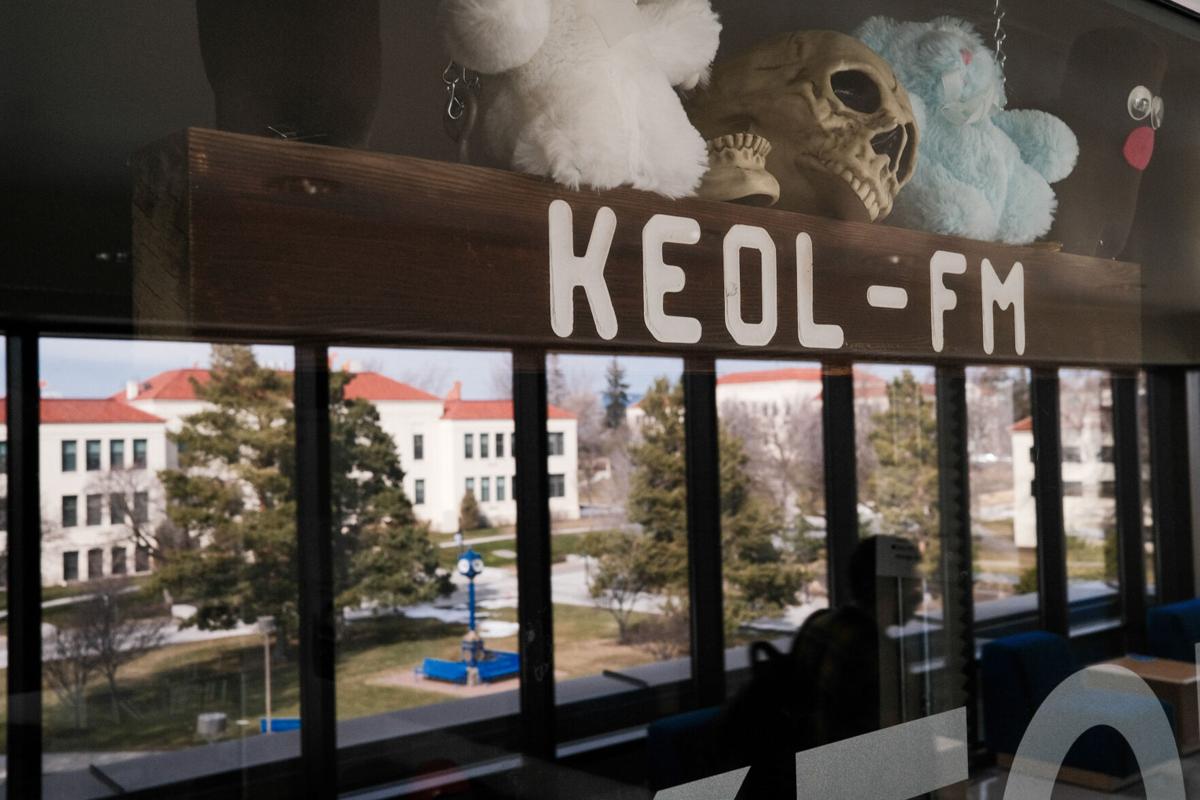 Eastern Oregon University reflects through the windows of the KEOL radio station room Friday, March 5, 2021. Several alumni have contacted EOU about how to keep the radio station alive following the announcement that it would be defunded at the end of the 2020-21 school year. 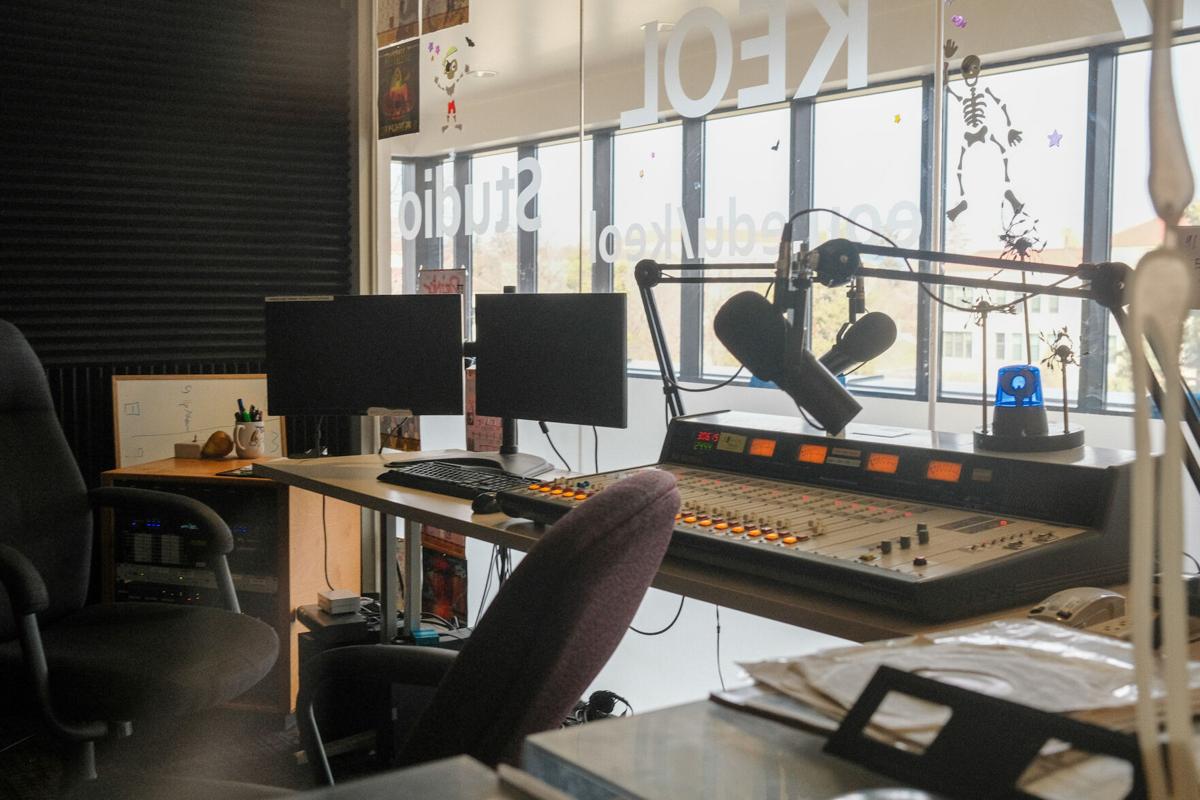 Eastern Oregon University’s KEOL radio studio sits empty on Friday, March 5, 2021. The university’s board votes in May on the proposal to not fund the station next school year.

Eastern Oregon University reflects through the windows of the KEOL radio station room Friday, March 5, 2021. Several alumni have contacted EOU about how to keep the radio station alive following the announcement that it would be defunded at the end of the 2020-21 school year.

Eastern Oregon University’s KEOL radio studio sits empty on Friday, March 5, 2021. The university’s board votes in May on the proposal to not fund the station next school year.

Garner was jolted recently when he found out KEOL FM, Eastern Oregon University’s student-run radio station since 1973, likely will be shut down in June at the end of the 2020-21 school year.

“I was heartbroken. I don’t like it,” said Garner, who served as KEOL’s station manager and program director during portions of the time he worked at the radio station from 1985-89.

The shutdown appears imminent after EOU’s Student Fees Committee voted to defund KEOL, which is receiving $33,481 from student incidental fees this school year to operate.

The committee, composed of EOU students, voted Feb. 5 to take the step primarily due to a budget shortfall from declining enrollment. Other reasons the committee cited were low student participation and the belief that traditional broadcast radio is a fading industry in today’s digital age.

Garner disagreed, saying, “There is still room for radio.”

He said radio is going in a different direction today but it has a future, one he believes KEOL should be helping train students for.

He said $33,481 is a small price to pay for Eastern to give students a chance to be introduced to radio.

“When you go to college you want to be exposed to as many things as possible, to get a well-rounded education,” Garner said. “It is important to get out of your comfort zone.”

Lack of student participation was another factor in the Student Fee Committee’s decision to defund the station, which EOU’s student senate supported on March 5. The station has about four student disc jockeys, plus two paid student staff members. This is a far cry from the 1980s and 1990s when KEOL had enough disc jockeys to fill almost every three-hour time slot almost around the clock.

“We had about 100 DJs and they were on the air day and night,” said Jack Kemp of Corvallis, a station manager at KEOL in the 1990s.

Garner has fond memories of what KEOL was like about 35 years ago.

He said there was an energy and excitement from students who had freedom to play all types of music during their three-hour shows.

“At any time you could hear something totally different,” Garner said.

Garner himself had three shows on KEOL, and on each he played a different genre of music. He said at the time La Grande had significantly fewer radio stations than it does today, which means listenership likely was higher.

“We were entertaining the whole town,” he said.

Leonard Hermens, who helped run KEOL in the early and mid-1980s, also said the station had a distinctive mix.

“It had its own variety and style, a variety not found on commercial stations,” said Hermens, who now lives in Puyallup, Washington.

KEOL, which has been on the air since 1973, now runs out of the Hoke Union Building, but its earlier locations included the top floor of Eastern’s library and an old cottage-type building just west of the library.

The station’s locale was a popular meeting place for Eastern students from all parts of the United States and the world, said Kemp, now an online education media producer at the University of Oregon who earlier was the media engineer for Oregon State University’s radio and television stations for 13 years.

Kemp said student radio stations, such as KEOL, have the potential to connect students.

“A radio station can bring students together like no other activity group can,” Kemp said.

He said this is because when students gather they often have two things they want to do — share the music they like and tell stories. Kemp said a college radio station provides an ideal setting for both to occur.

Kemp, despite his love of student radio, sympathizes with the situation Eastern’s Student Fee Committee found itself in.

“It looks like Eastern’s student leaders had to make hard choices,” he said.

The SFC received requests for $1.4 million in funding in 2021-22, but could allot only $1.2 million because of the projected decline in incidental fee revenue. This meant virtually all of the 20 organizations requesting money from the committee had their funding cut.

Hermens, like Kemp, understands it is a difficult situation.

“I don’t want it to happen, but I can understand why,” Hermens said.

Kemp said despite the defunding, KEOL, which also is available via the internet, still has a future, either as an online student-run station or as a community station.

He said KEOL could continue operating online for significantly less money while adding vibrancy to the campus. It would have to do more than just play music, he said, and add local news and information about upcoming activities on campus.

“It would have to be a scene, one that is event-centered,” Kemp said.

Should the community station route be taken, Kemp said KEOL could become a nonprofit entity that community members operated while EOU continuing owning the station.

A community station would provide a means for individuals and groups to tell their own stories and share experiences.

“It would be a great way to bring Eastern and the community closer together,” Kemp said.

Kemp noted The Evergreen State College in Olympia, Washington, has had a successful community radio station, KAOS, for a number of years. Its features include live performances, programming produced in studio, and local outreach.

“They could use KAOS as a model,” Kemp said.

Tim Seydel, Eastern’s vice president for university advancement, said since the reporting on KEOL defunding, many alumni have contacted EOU. Seydel said they have asked how they can help keep student radio alive at the university. He said a meeting of these individuals will be conducted to see what might be done. Seydel said many possibilities will be explored, including community radio, podcasts and livestreaming.

The EOU’s Board of Trustees at its May 20 meeting considers approving the incidental fee budget.

• The committee cited various reasons for its decision, including budget shortfall from declining enrollment and the notion that traditional broadcast radio is a fading industry.

• Supporters of KEOL argue the station has a future and might be able to continue as a community radio station.

• The EOU’s Board of Trustees at its May 20 meeting votes on approving the budget for student incidental fees.