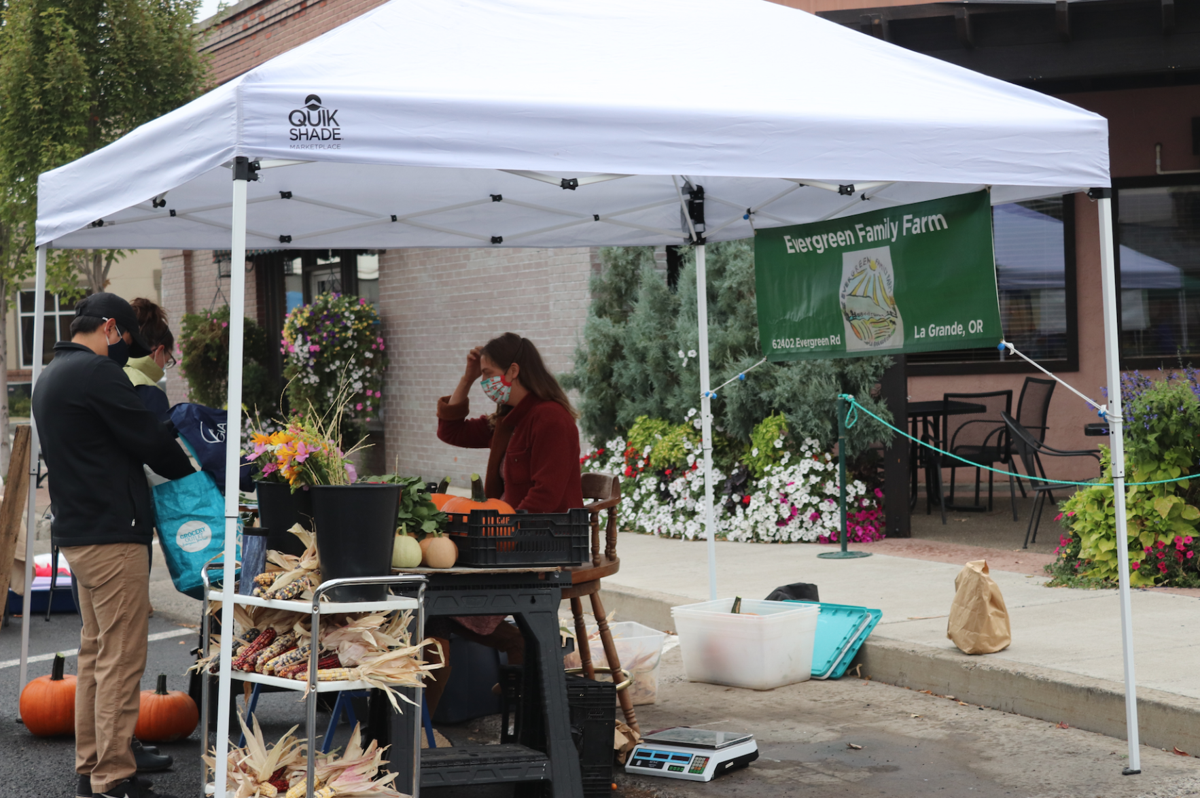 Sarah Fischer of Evergreen Farm, La Grande, sells her produce Saturday, Oct. 10, 2020, at the La Grande Farmers Market. The local market opens its 2021 season on May 15. While COVID-19 restrictions remain, the market is bringing back some events, including Kids Day. 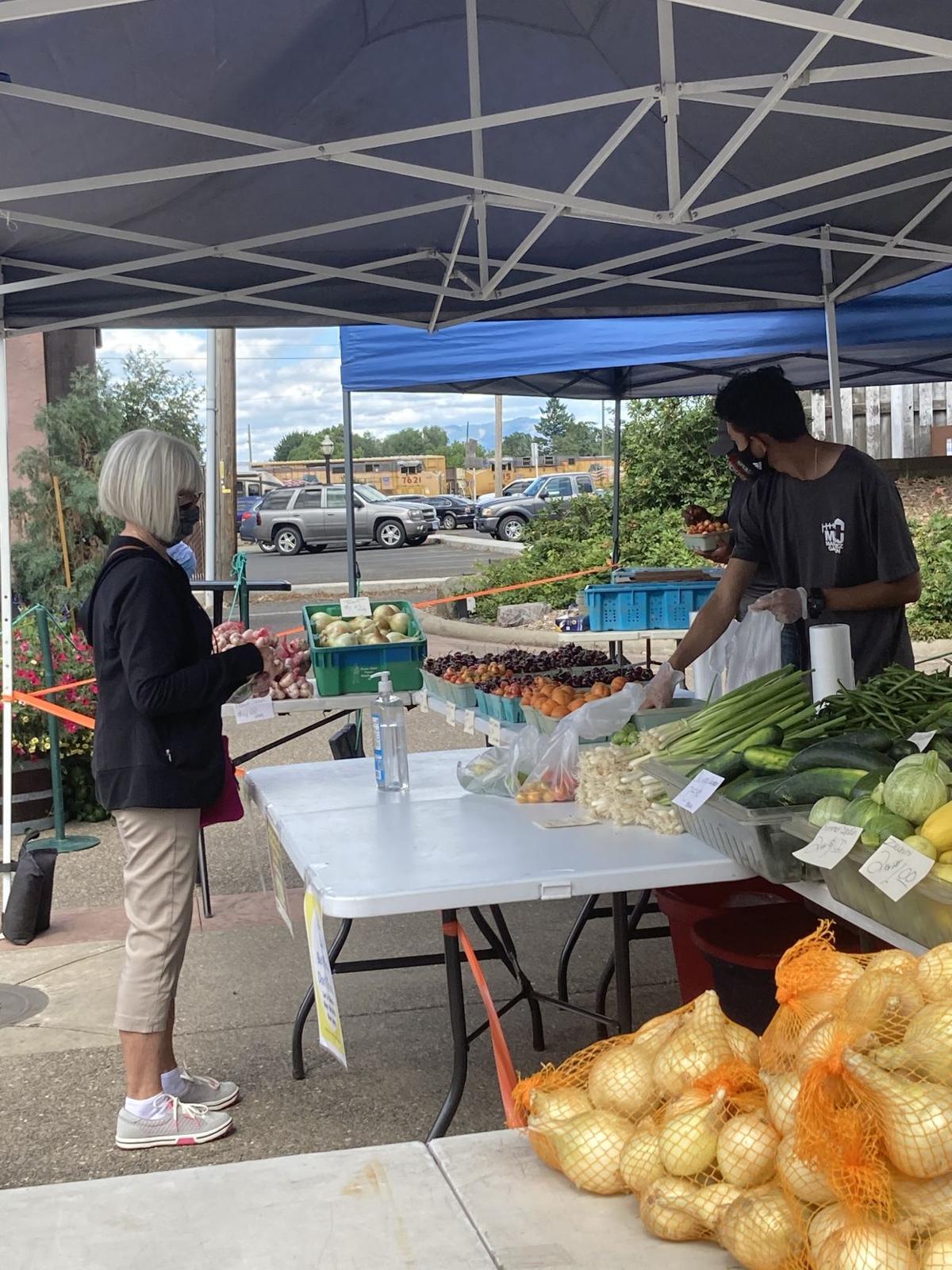 Shoppers and vendors wear masks and follow other COVID-19 precautions at the La Grande Farmers Market in 2020. The market opens its new season May 15, 2021, and while pandemic restrictions remain, the market this year plans to allow craft vendors and a space for community organizations.

Sarah Fischer of Evergreen Farm, La Grande, sells her produce Saturday, Oct. 10, 2020, at the La Grande Farmers Market. The local market opens its 2021 season on May 15. While COVID-19 restrictions remain, the market is bringing back some events, including Kids Day.

Shoppers and vendors wear masks and follow other COVID-19 precautions at the La Grande Farmers Market in 2020. The market opens its new season May 15, 2021, and while pandemic restrictions remain, the market this year plans to allow craft vendors and a space for community organizations.

LA GRANDE — The La Grande Farmers Market is readying for its 41st season.

Market manager Shaletta Baldwin said the market opens Saturday, May 15. She also said the market will continue to operate with COVID-19 restrictions in place, but some events the market had to drop for the pandemic in 2020 will be making a return, including Kids Day.

The market operates May through October on Saturdays from 9 a.m. to noon and Tuesdays 3-6 p.m. in downtown La Grande at Max Square on the corner of Fourth Street and Adams Avenue. Baldwin said the market in the past has carved out some space for youths to set up booths on a Saturday to sell their own goods, plus there are activities for children, such as arts and crafts.

“We usually get a really good sponsor for this,” she said. “Valley Insurance already signed on.”

This year’s market also is allowing the return of artists and craftspeople to sell their goods and will provide space for a community booth. Baldwin explained that space is valuable for community organizations and nonprofits because it allows them to get in front of the audience they appeal to.

Those were missing from the 2020 season because booths had to set up 6-10 feet apart to meet coronavirus requirements for social distancing, she said, so the market allowed the sale of consumables only. Hot food service was not allowed last year and remains off the menu for the upcoming season.

“We have not gotten cleared to do that yet,” she said.

But the market does anticipate providing live music again, probably about halfway through the season. Baldwin said, by then, enough people should have received COVID-19 vaccinations to allow more events to return.

“That is something we are really looking forward to,” she said.

The restrictions to curb the spread of the virus last year meant the market had to curtail much of what it usually offered.

“We definitely were impacted because in years past we could have 40-some vendors on a normal schedule,” Baldwin said, “but last year we topped out at 25.”

Yet, the vendors who participated in the market tended to do at least as well as in previous years.

Baldwin said the market conducted a postseason survey and found most vendors matched their sales or did better than they had in 2019. And while the market started slow, it didn’t end that way.

“As soon as the season was up and running, everything was pretty much back to normal as far as transactions go,” she said.

The market operates on a budget of about $20,000 a year, Baldwin said, and much of that money goes to paying the market manager and a promotions manager. Without the usual number of vendors, she said, the market has sought sponsors and partnerships to help cover financial gaps.

“Whatever it takes to get the show to go on, we’re doing it,” Baldwin said.

That includes exploring the possibility of a 501c3 charitable nonprofit.

“We are considering it,” she said.

Baldwin said the board has talked about becoming a nonprofit because it opens up the market to some revenue streams, primarily grants, that it doesn’t qualify for now. It also would mean people who donate to the market could claim that charitable donation on their taxes.

Becoming a 501c3 is a lengthy process, she said, and would take some time.

The meeting provides information to new vendors and allows veteran vendors to firm up their commitments. This year, the board also is looking to fill a vacancy.

The 10-member board is one shy, Baldwin said, and seeking someone who is community-minded and has an interest in local food systems.

For more information about the market, including the annual meeting, visit www.lagrandefarmersmarket.org.