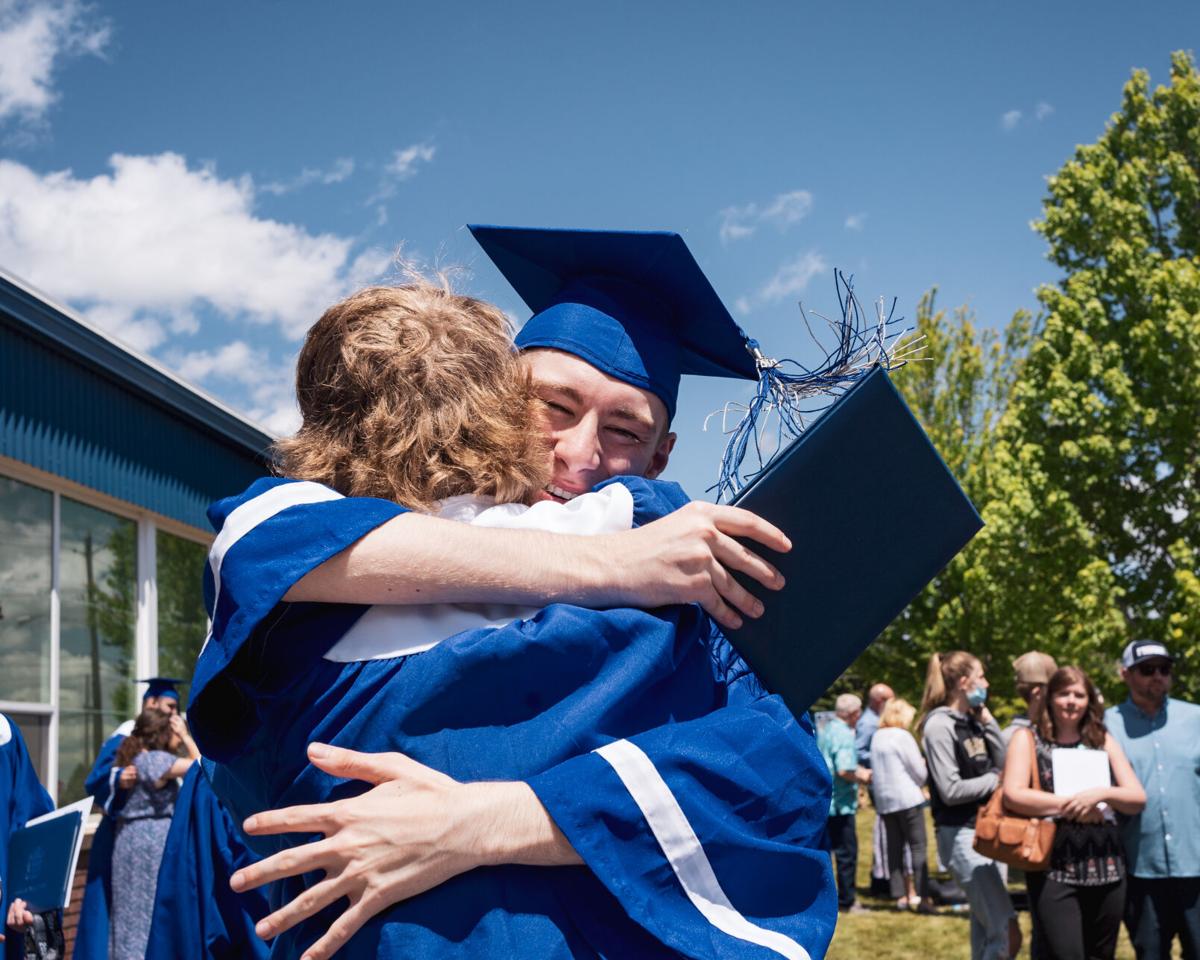 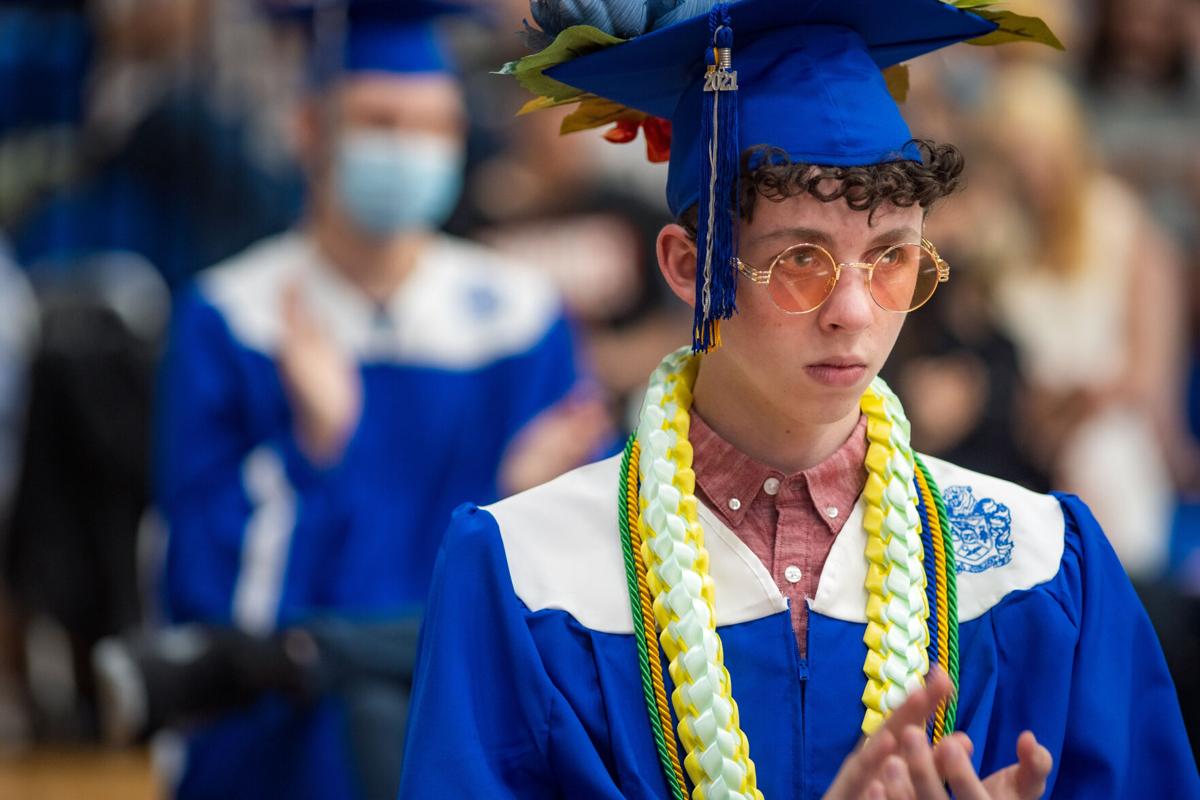 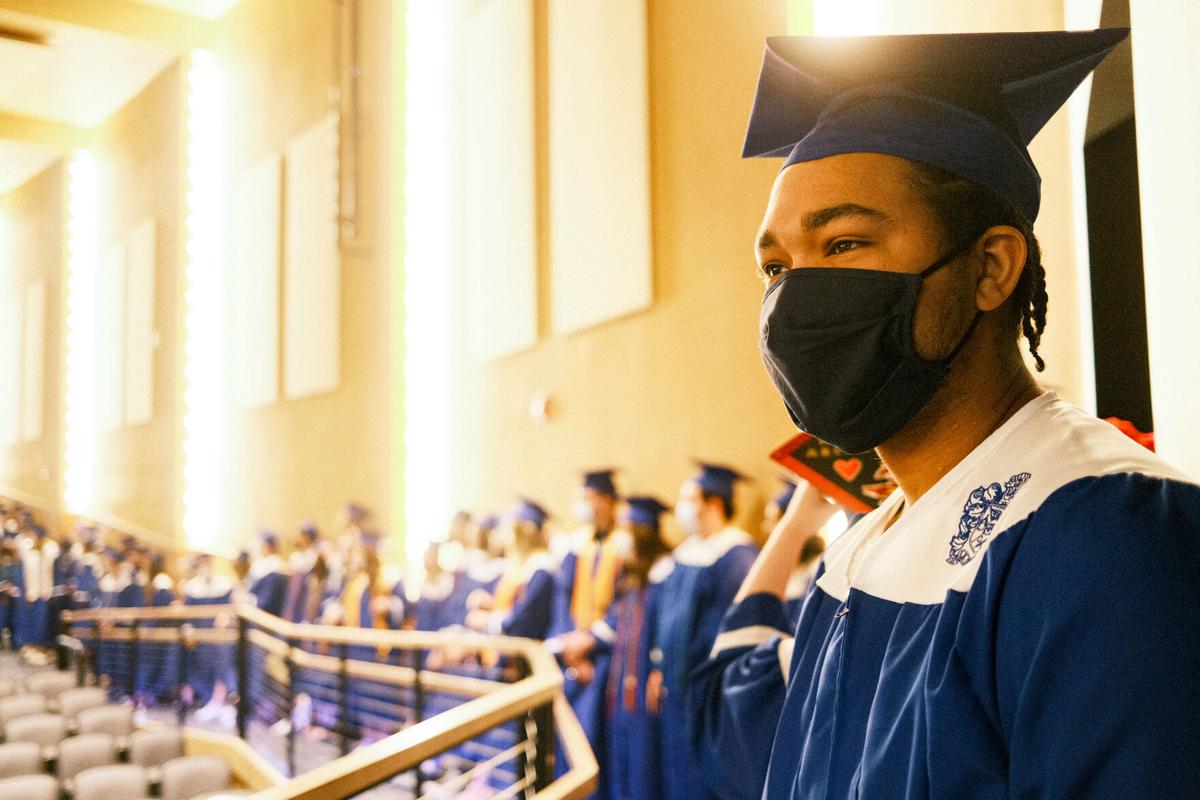 La Grande High School graduate Darius Abram waits at the front of a line of his classmates Saturday, June 5, 2021, inside the school's auditorium while teachers and staff give last-minute instruction on the commencement ceremony. 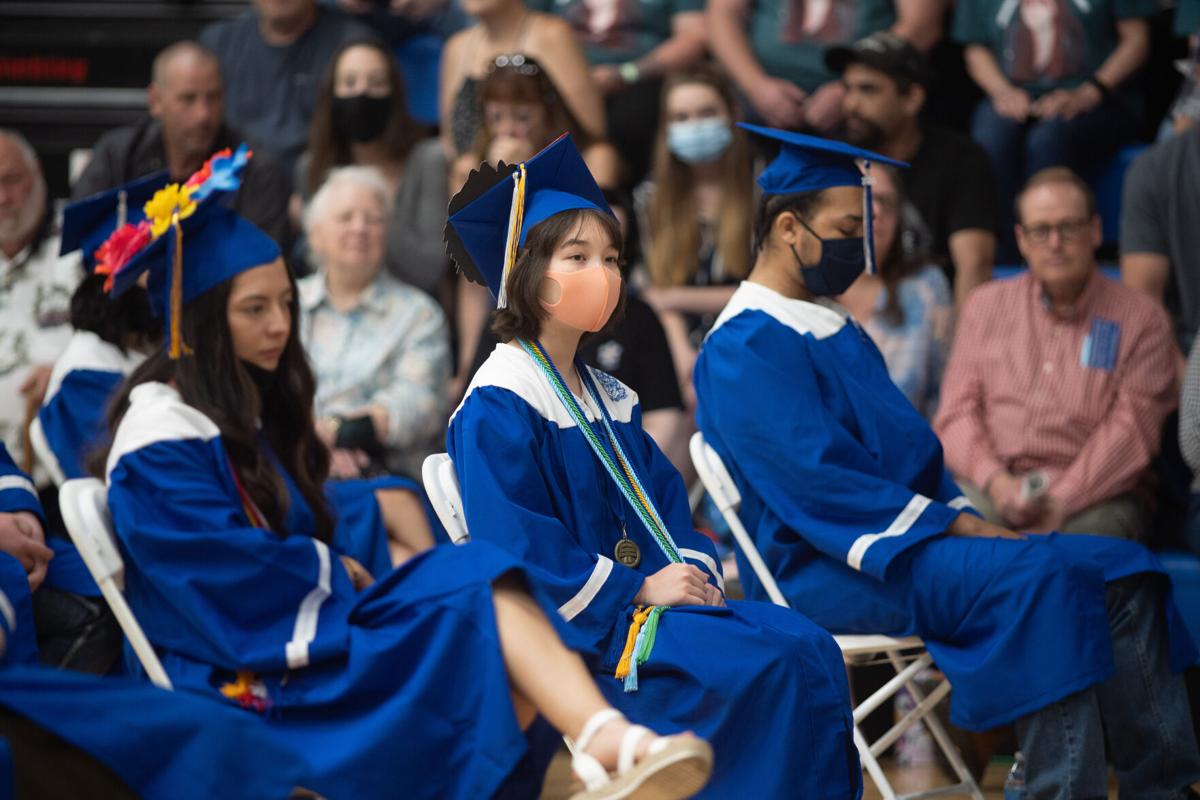 Alisha Acireno, center, one of La Grande High School's valedictorians, looks on Saturday, June 5, 2021, during an address to the graduating class in the school's gymnasium. 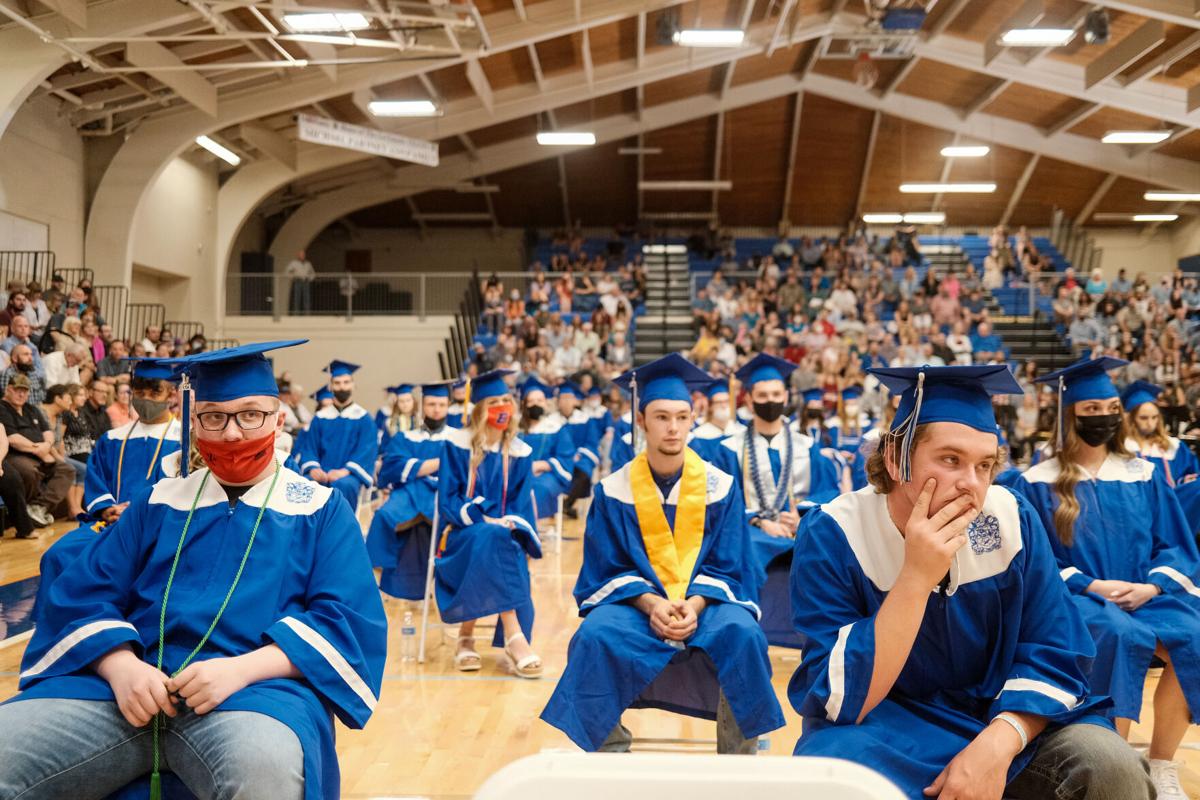 La Grande High School graduate Darius Abram waits at the front of a line of his classmates Saturday, June 5, 2021, inside the school's auditorium while teachers and staff give last-minute instruction on the commencement ceremony.

Alisha Acireno, center, one of La Grande High School's valedictorians, looks on Saturday, June 5, 2021, during an address to the graduating class in the school's gymnasium.

LA GRANDE — As La Grande High School senior Camryn Collman gave her valedictorian speech in front of a packed audience in the school’s gymnasium, she noted the gathering was the first time the whole class had congregated together in more than a year, and it would likely be the last.

This bittersweet sentiment echoed throughout the commencement ceremony of the La Grande High School Class of 2021 Saturday, June 5.

Friends and families of the 143 graduates congregated to celebrate and honor a graduating class that endured the difficult circumstances of the COVID-19 pandemic. Graduating seniors were allowed up to five tickets for potential attendees so the school could comply with state guidelines for indoor gatherings.

“I think it’s important that in moments like this, you pause and think about what it took to get us to this point,” La Grande High School Principal Brett Baxter said.

The seniors spent most of the year studying virtually, more than 150 days, and returned to in-person learning well into the academic year. While the pandemic did away with events such as prom, attending football games and school assemblies, many noted the resiliency of this class during unprecedented times.

“There were many unexpected lessons learned during this time in patience, self-discipline and caring for the people around us in ways that we didn’t need to before,” said La Grande School Board Chair Robin Maille in her speech to the graduates.

Although the pandemic hindered activities during this class’s senior year, the future possibilities are limitless for a group of students who had to learn how to adapt. Of the 143 graduating seniors, 11 were honored as valedictorians for finishing every semester with a 4.0 GPA during their four years at La Grande High School.

Alisha Acireno was one of the valedictorians to speak, and she even spoke briefly in Japanese for her extended family in Japan.

“This school year has really amplified my gratitude for the people around me,” Acireno said.

More than 50 seniors received some sort of scholarship for higher education following their graduation from high school.

“You’re probably more ready than any graduates that have come before you,” said La Grande Superintendent George Mendoza during his speech.

For Mendoza, this year’s graduating class was special not only because of his position with the school district, but because his son, Cristian, graduated with the Class of 2021.

The superintendent praised the school district, community and LHS faculty for getting the high school back to in-person learning. He noted many communities and schools across Oregon were unable to overcome obstacles in the way that La Grande did during the 2020-21 school year.

Guest speakers give words of wisdom

La Grande Middle School teacher Klel Carson was requested by the students to be the ceremony’s guest speaker. Carson credited the seniors as the most adaptable class of all time and noted he had never seen a class have three first days of school in their senior year.

“It’s been a year that you will never forget and neither will anyone else,” Carson said in his speech.

A longtime community member, Carson noted seeing some of his closest friends in the audience and in the graduating class.

Kevin Cahill, a teacher at La Grande for more than 30 years, gave the guest of honor speech. Cahill reflected on the passage of time throughout the speech and cherished seeing the graduates live out important moments in their lives.

More than 80 students were recognized as pathways endorsement recipients, studying in programs that focus on career learning opportunities.

For students attending higher education following graduation, the list of colleges and universities being attended stretches far and wide. From staying close to home at Eastern Oregon University to traveling to Duke University in North Carolina, the Class of 2021 casts a broad net.

Despite hurdles to the class’s learning and personal experiences, the turning of tassels drew a sense of achievement and relief from the students and audience members.

Senior Class President Hayden Robinson and school board student representative Kobe Cooper stood on stage and announced the moment as the Class of 2021 officially graduated. Caps flew high in the air as the pandemic senior year became a thing of the past.

“The world is already a better place because of you,” LHS Principal Baxter told the graduating class. “I’m confident that you will continue to make a positive impact with your chosen paths.”