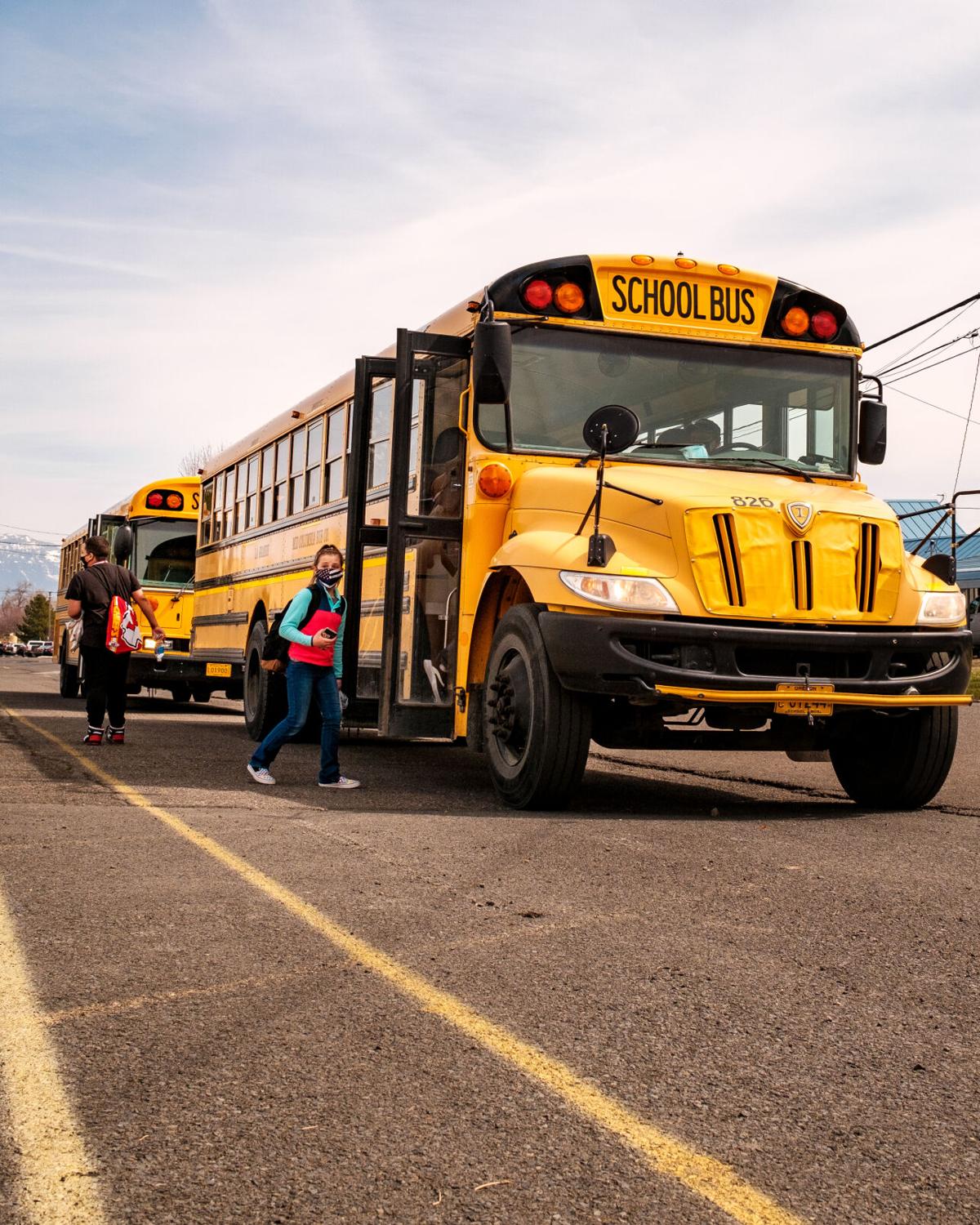 A student with La Grande Middle School boards a school bus in the afternoon following class on Friday, April 2, 2021. School district Superintendent George Mendoza announced middle and high school students return to in-person learning each day of the week starting April 12 based on local data and guidance from health officials. 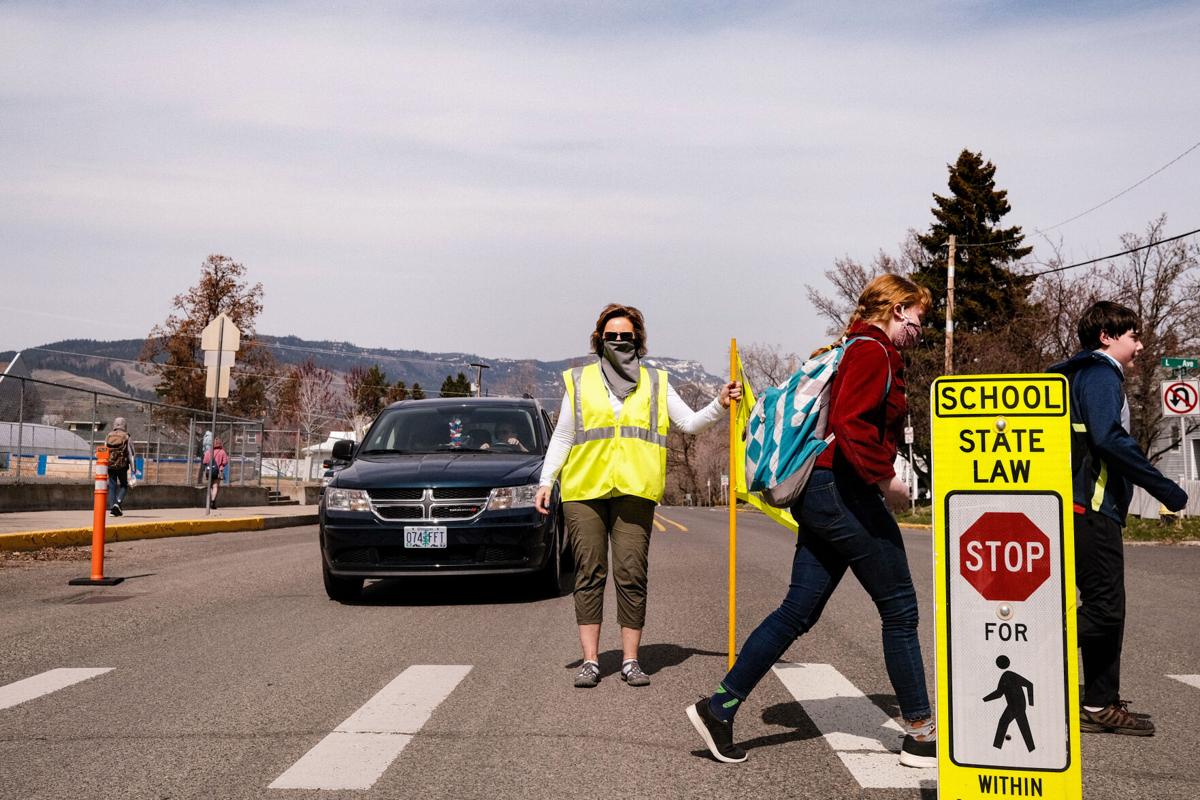 Vicky Huffman, a paraeducator at La Grande Middle School, acts as a crossing guard for students as they leave class Friday, April 2, 2021. The La Grande School District announced its students would be attending school every weekday starting April 12.

A student with La Grande Middle School boards a school bus in the afternoon following class on Friday, April 2, 2021. School district Superintendent George Mendoza announced middle and high school students return to in-person learning each day of the week starting April 12 based on local data and guidance from health officials.

Vicky Huffman, a paraeducator at La Grande Middle School, acts as a crossing guard for students as they leave class Friday, April 2, 2021. The La Grande School District announced its students would be attending school every weekday starting April 12.

LA GRANDE — Students in the La Grande School District are heading back to in-person learning every day of the week.

Days will remain short through the school year, however, and students enrolled at La Grande Virtual Learning Academy can continue with online learning.

That also means there is no school Friday, April 9. Mendoza explained staff need the time to prepare for the influx of students and to organize lesson plans, as well as to reconfigure classrooms and bring in furniture. Also, he said, the school needs to deal with the logistics of providing meals to more students.

Getting to this point, Mendoza said, started March 19, when Gov. Kate Brown announced an update to the Ready Schools, Safe Learners guidance that lowered the physical distancing rule for students in schools from 6 feet to 3 feet and removed the 35 square feet per person requirement for counties that meet Oregon’s COVID-19 moderate risk levels. Mendoza said this was not a mandate from the state to increase the number of students in schools, but instead will now be a local decision.

“What that did for our school district is it increased the opportunity or propensity for us to have students back, every day, all in, K-12,” he said.

Union County also remains in the moderate risk level, which gives the La Grande School District a green light to allow its students in its buildings at the same time. But Mendoza also showed how COVID-19 has been affecting students and staff.

The district has 2,188 students, Mendoza said during his presentation, and since the start of the school year, 20 staff and 26 students have tested positive for COVID-19, and 32 staff and 167 students have shown primary symptoms.

In all, he said, between staff and students, 480 people in La Grande schools have had to isolate or quarantine for at least 10 days.

“I just want you to know that it’s great we have students in school, but there’s risk involved,” he said. “There’s work we have to do to keep us safe, and that’s the reality, that’s the truth.”

Mendoza said he and the school board have been committed to returning all students to full-time, in-person learning as soon as it was safe to do so. When the state updated Ready Schools, Safe Learners guidance, the La Grande School District dispersed a survey asking students and families if they would desire a full return. He said the survey results plus consultations with the Center for Human Development, Grande Ronde Hospital, Union County Board of Commissioners and Union County Emergency Management all support the full return.

Mendoza also stressed he listens to what local public health officials say about keeping schools safe and stopping the spread of the virus.

“If they ever tell me that they think we have to shut down, I don’t usually tell them they’re wrong and that I’m not going to do that,” he said. “I usually just go forward with their suggestions so we can reduce the risk and reduce the spread of COVID.”

But data from the survey and those consultations, Mendoza said, delivered the message to move forward with having students return to regular school days.

“We’re definitely excited about that,” he said, and asked pediatrician Dr. Zachary Spoehr-Labutta for his take on La Grande students returning to classes.

“Based on the currently available data, I support this measure wholeheartedly,” the doctor said.

He explained he receives emails weekly from school districts nationwide regarding how implementation of key COVID-19 safety practices have turned out in their districts.

He said the understanding of the virus and key safety measures make it feasible for Union County to move to having middle and high school students back on campus classes every weekday. He also advised parents to give those students some concrete advice: Tell them if they can reach out and touch someone in school, they are too close.

Mendoza also said while students are returning to school, maintaining key safety practices is a priority. Staff still must maintain 6 feet of physical distance between one another and continue to physically distance from students to the greatest extent possible, and close contact rules still apply. He also emphasized the need for vaccinations, which could have the most significant effect on returning to normalcy in schools.

Scott Carpenter, the school district’s director of education, during the virtual town hall explained elementary grades will continue classes 8 a.m to 1 p.m. each weekday. Middle and high school students starting April 12 will attend classes 9 a.m. to 1:25 p.m. in two blocks of periods that alternate, with periods 1-4 one day and 5-8 the next. Keeping the later morning start prevents elementary school students from riding buses at the same time as middle and high school students, he said, and lunch will be “grab and go,” 1:30-2 p.m., when the school day ends.

Going back full time “carte blanche,” Carpenter said, would cause a “major disruption” to people and systems throughout the district.

Still, this change increases instructional hours from 10-15 a week to closer to 25 a week, he said, and gets students in the habit of returning to school each weekday. He also said students have the option of using the district’s online education academy.

Now the next big target, Carpenter said, is full school days in the fall.

The OHA on Thursday, April 1, reported a 48-year-old woman in the county tested positive March 17 and died on Tuesday, March 30, at St. Luke’s Medical Center in Boise, Idaho. She had underlying conditions and became Oregon’s 2,385th COVID-19 death and the county’s 22nd.

The number of cases overall in Union County continues to tick up, with four news cases Thursday and six more Friday, bringing the county’s total to 1,382.