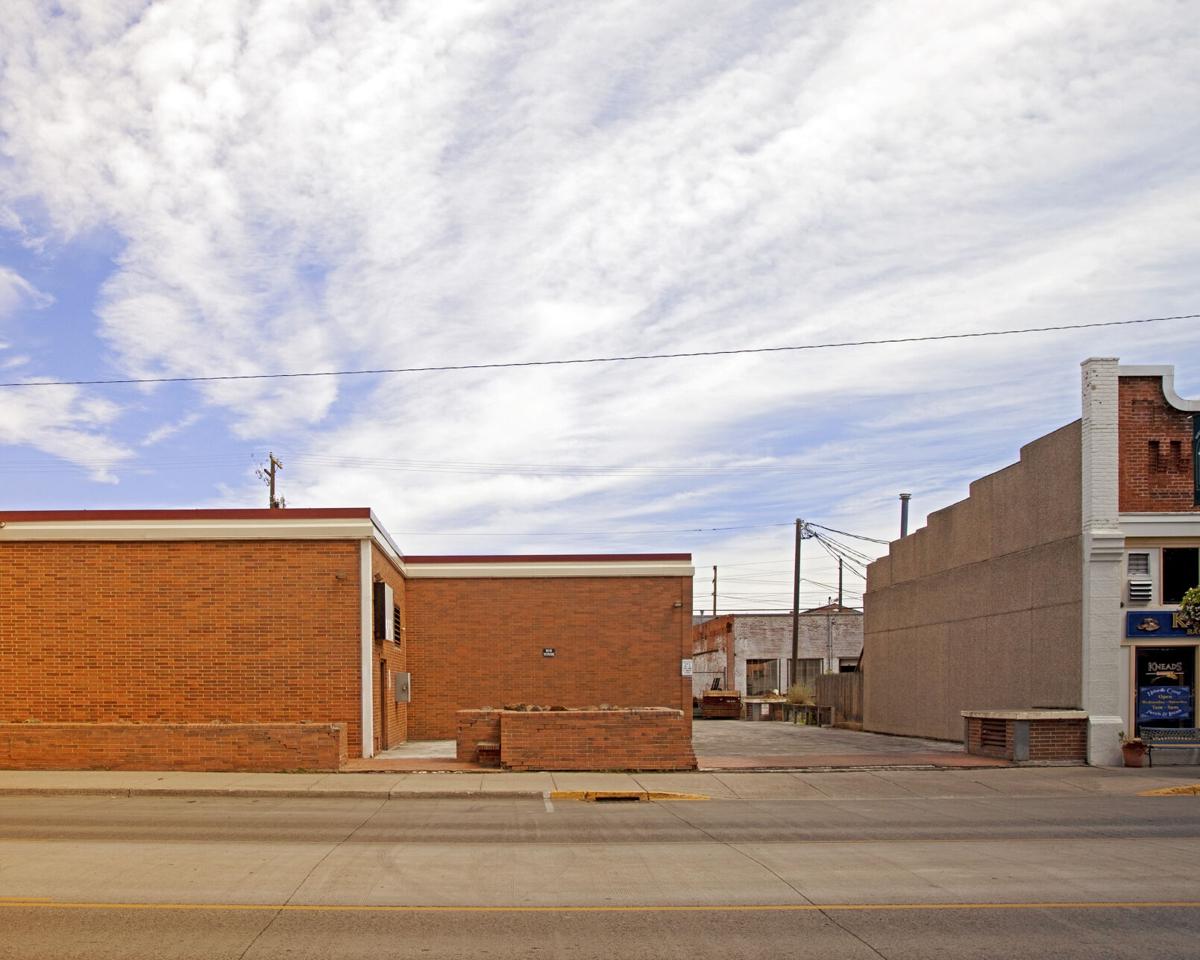 Seattle-based photographer Tim Greyhavens says his researched shows Chinese immigrants once owned laundry businesses at this site on Adams Avenue near Depot Street in downtown La Grande. The photo is part of a collection of his research into the anti-Chinese sentiment across the United States in the late 1800s. 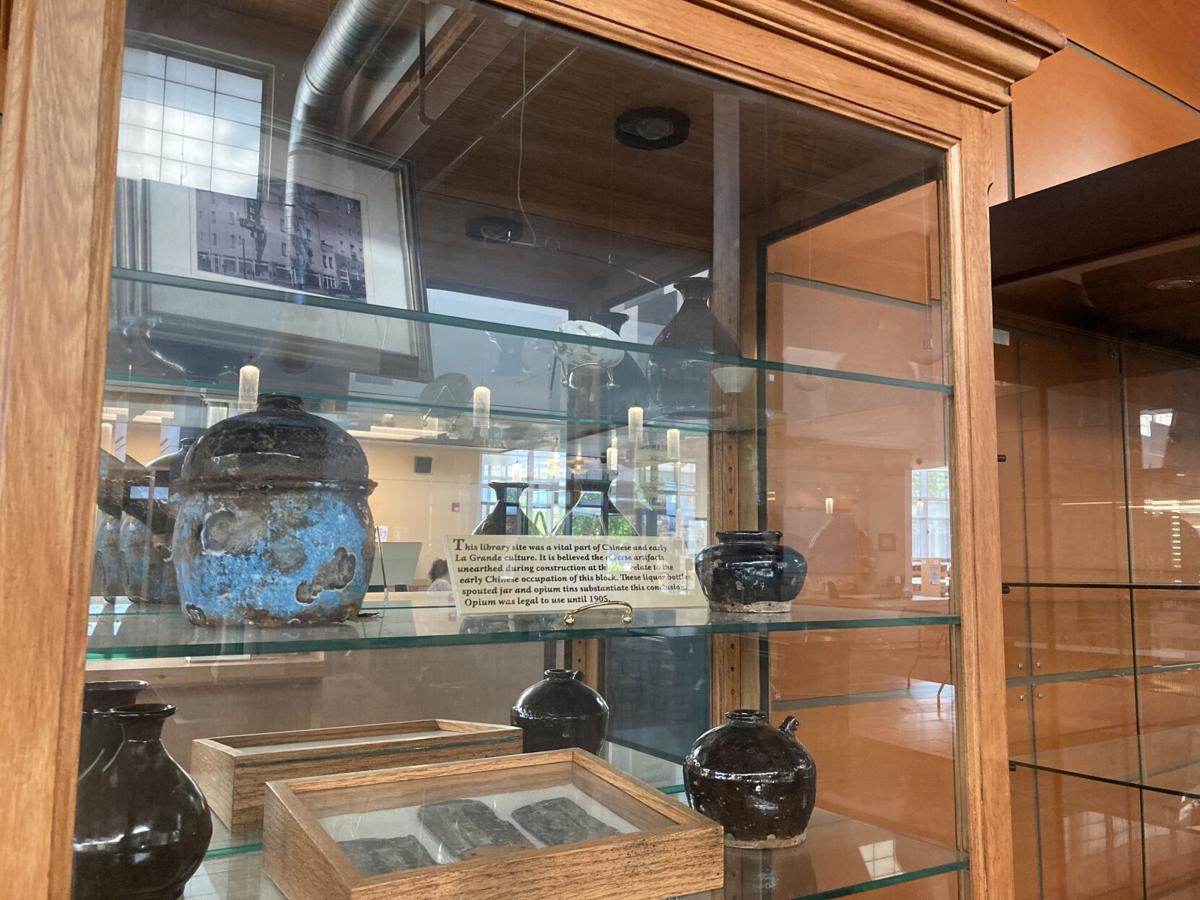 The Cook Memorial Library, La Grande, houses a display of artifacts unearthed during the 2004-05 excavation for the library. Many of these pots and tins were used by Chinese immigrants who lived in La Grande in the late 19th and early 20th centuries.

Seattle-based photographer Tim Greyhavens says his researched shows Chinese immigrants once owned laundry businesses at this site on Adams Avenue near Depot Street in downtown La Grande. The photo is part of a collection of his research into the anti-Chinese sentiment across the United States in the late 1800s.

The Cook Memorial Library, La Grande, houses a display of artifacts unearthed during the 2004-05 excavation for the library. Many of these pots and tins were used by Chinese immigrants who lived in La Grande in the late 19th and early 20th centuries.

Once the immigrants were gone, the mob looted and burned down their businesses and homes. No one was convicted of any crime for the destruction.

In 2011, Seattle-based photographer Tim Greyhavens was in Northeast Oregon to do some photography and discovered the history of Chinese discrimination in La Grande.

Greyhavens already was working on The No Place Project, which he began with the goal of revealing the stories of racism, oppression and violence endured by early Chinese immigrants in North America. Oregon is one of the nine states he said where he has found evidence of such a history.

"This whole project started with my love of landscape and nature photography," Greyhavens said. "I was looking into the events in Hell's Canyon when I came across the history of discrimination in La Grande."

Hell's Canyon was the location of a Chinese massacre in 1887, when a group of white men surrounded 31 Chinese men who were camped on the river and opened fire. None of the immigrants survived.

Greyhavens said through his research he found many of the issues people in Oregon had with Chinese immigrants were initially due to gold mining, with the American miners unhappy about sharing any of the possible wealth with foreigners. Later the bad feelings grew because the Chinese would work for lower wages than union workers, which was perceived as taking jobs away.

In La Grande, immigrants had laundry businesses and restaurants along Adams Avenue and homes nearby, according to Greyhavens' research.

Greyhavens looked at newspaper microfilms from local publications in 1893, including the La Grande Gazette and East Oregon Republican. The Observer was not around until three years after the attack. He found an article the Gazette published the day of the riots about a meeting town officials and residents held regarding the desire to remove Chinese immigrants from the town.

"On motion a committee of seven was elected, whose duty it should be to do all within their power to secure the enforcement of existing laws on the Chinese question and to use all legitimate means within their power on behalf of American labor against alien Chinese labor, and to seek 'United Action' and cooperate with similar organized bodies throughout the Pacific coast on this important subject," the article said.

The East Oregon Republic published an article the day after the purging. The paper reported an armed mob of 200 met outside the city limits at midnight, marched to the Chinese quarters and, after looting the houses, forced the immigrants to the edge of the city and ordered them to leave. Prior to the raid, the group held a rally to gain support and gathered at the Red Pepper Schoolhouse on Sandridge, 12 miles north of La Grande. Speakers included W. G. McLellan, attorney E. A. Esteb and James Slater, former U.S. senator for Oregon.

"Marshals McLachlan and Ardrey, Constable Walden and Deputy Sheriff Lindgreen attempted to quell the riots, but as it was entirely unexpected and no preparation had been made, they were soon overpowered," the article reported. "The city authorities took prompt action when apprised of the outrage this morning. Warrants have been issued for the arrest of the ringleaders and preparations have been made to prevent a recurrence of the attack."

The Gazette on Sept. 29 also recounted the events of Sept. 24.

"The first stand was made at the Chinese row on Adams Avenue," the La Grande Gazette reported. "The officers had preceded them, and placing themselves in front of the first wash house they again advised the crowd to disperse and give up their arms, assuring them that the first man who attempted to affect an entrance into the house would be killed. It was here that McLellan again distinguished himself by his speech to the mob in which he heaped opprobrious epithets upon the officers, calling them 'petty marshals' and similar names, and advising the men to retain their arms, and to use them if necessary."

The Gazette reported the immigrants scattered and ran from their homes. Those in the mob captured them, marched them out of town and ordered them to leave.

Following that night, the sheriff's office organized volunteer patrol deputies. There was a small fire at the Chinese-owned store Kong On Fie on Jefferson Avenue that night. Several small fires also had preceded the night of the riots.

The Republican on Oct. 5 reported 53 of the 200 agitators were arrested in La Grande. Chas. F. Hyde, district attorney at the time, in the article said the town seemed at peace, although some of the Chinese immigrants had returned and there was discussion of again forcing them to leave.

Greyhavens said he hasn't uncovered any significant reports of anti-Chinese actions in La Grande after 1893. He found that many of the immigrants returned to the town. A small community remained for many years, but little evidence is left of their time here.

An 1893 Sanborn Fire Insurance map of the city at Eastern Oregon University's Pierce Library shows several Chinese laundries and dwellings along Adams Avenue, and Greyhavens matched that with a current city map and speculates the buildings the mob torched were on the 1100 block of Adams Avenue.

In 2004-05, excavation work at Fourth Street and Adams Avenue found artifacts from when Chinese immigrants were living in La Grande, according to a report published by The Observer. Teapots and opium tins were among the relics.

Greyhavens said his project is incomplete, but he often reflects on his findings and the attitudes of those in 1893 La Grande and beyond.

"It is interesting to draw parallels between what was happening then," Greyhavens said, "and what happens now regarding thoughts and ignorance about immigrants."