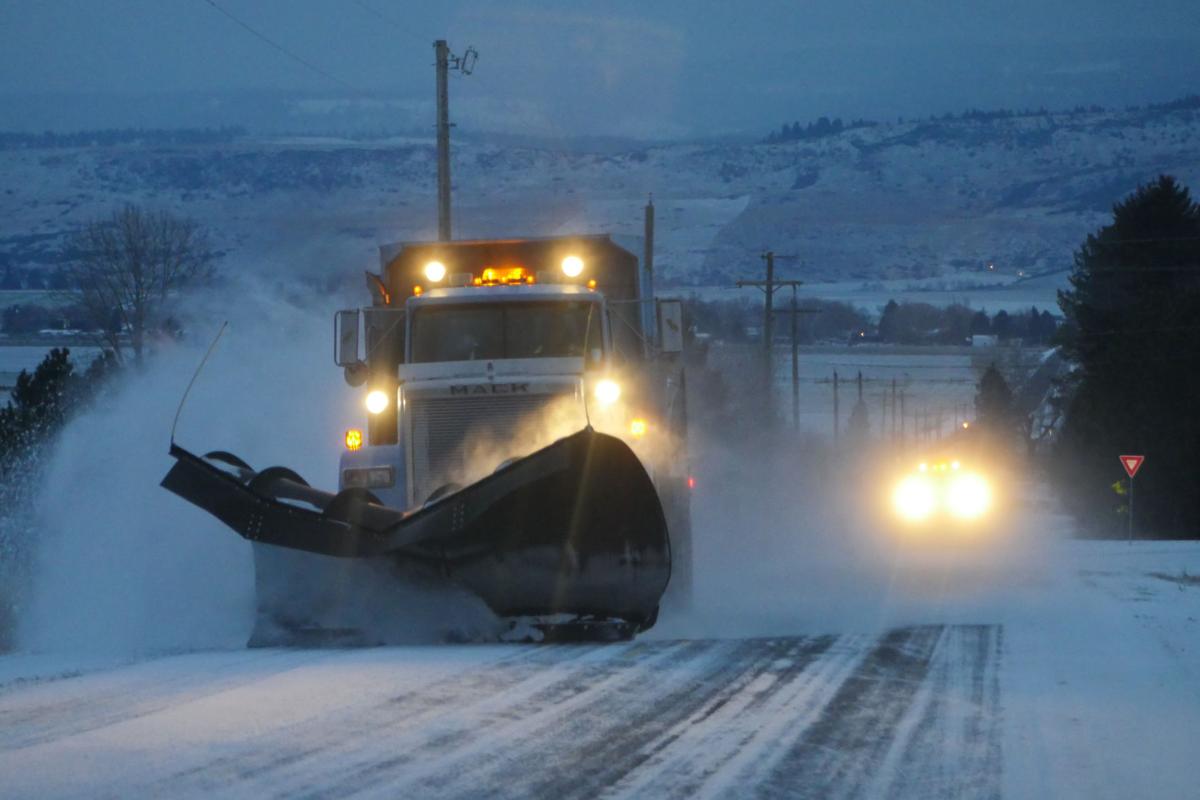 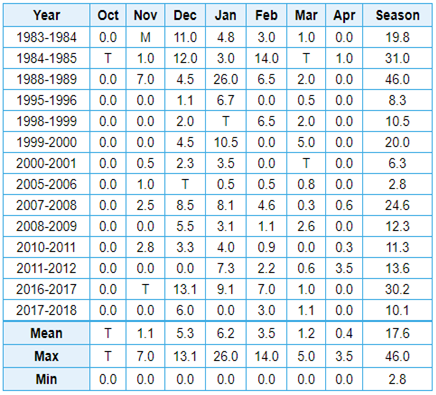 A chart from the National Weather Service details monthly and annual snowfall during La Nina winters in La Grande.

LA GRANDE — The National Oceanic and Atmospheric Association is predicting a wetter-than-average winter season across much of the northern United States, including the Pacific Northwest. While nearby Great Basin states are bracing for winter drought, Oregon’s La Nina forecast has residents readying for a potentially snow-packed season.

“We’re pretty confident it’s going to be wetter than normal,” said Marc Austin, warning coordination meteorologist for the National Weather Service in Pendleton. “There’s no guarantee that it’s going to be frozen precipitation, a lot of it could just be liquid, but people should always be prepared just in case.”

Austin said he has calculated La Grande’s average annual snowfall to be 18.6 inches. While he stressed La Nina seasons tend to be wetter, they don’t inevitably lead to higher-than-average snowfall; however, it is a possibility.

The La Nina winter of 2016-17, for example, inundated La Grande with 32 inches of snow, more than a third of which fell in December alone. That level of snowfall was the most since the winter of 1988-89, when 46 inches of snow fell in La Grande, more than half during the month of January.

Winter weather, along with the slick roads, snowdrifts and potential prolonged power outages, can be a serious hazard in Eastern Oregon. But, like with many of life’s hazards, they can be mitigated with good preparation.

The Oregon Trail Electric Cooperative, for example, issued a press release last week urging its members to prepare ahead of last weekend’s winter storm, which caused road closures and crashes around the region.

“Everybody knows snow and ice are a part of winter here in Eastern Oregon,” said OTEC communications manager Joe Hathaway. “So we want our members to be as prepared as possible and to keep themselves and their families safe during winter storms and in winter weather conditions.”

Hathaway said OTEC is urging people to prepare for the cold by winterizing their homes, a process that can include insulating windows with plastic, sealing drafts with caulk or weather stripping, and taking steps to ensure household pipes do not freeze and burst.

OTEC also reminded its customers that downed power lines, which always are dangerous, can be more common following winter storms, and anyone who encounters a power line on the ground should stay away. Falling trees or branches, which can break under high winds or the weight of wet snow, can take down power lines.

Along with the American Red Cross, the Federal Emergency Management Agency, the National Weather Service and a myriad others, OTEC encouraged people to prepare an emergency kit for use in the event of a disaster.

“Having a survival kit ready, having enough warmth — blankets, other alternate heating sources that don’t require a plug in, a wood fireplace (or) a propane space heater — there is a ton of stuff that we really try to stress to our members about staying safe over the winter,” Hathaway said.

Emergency kits should contain a number of items, including food and water, toiletries, a supply of vital medications, blankets and warm clothing and a flashlight, among other things. Those with children should also consider adding diapers, baby food or formula and anything else they may need to their kit.

People who may need to drive in winter conditions should also consider preparing an emergency kit for their vehicle including jumper cables, chains, food and water and a way to contact help in case of trouble.

For more information on building an emergency kit, visit www.ready.gov.