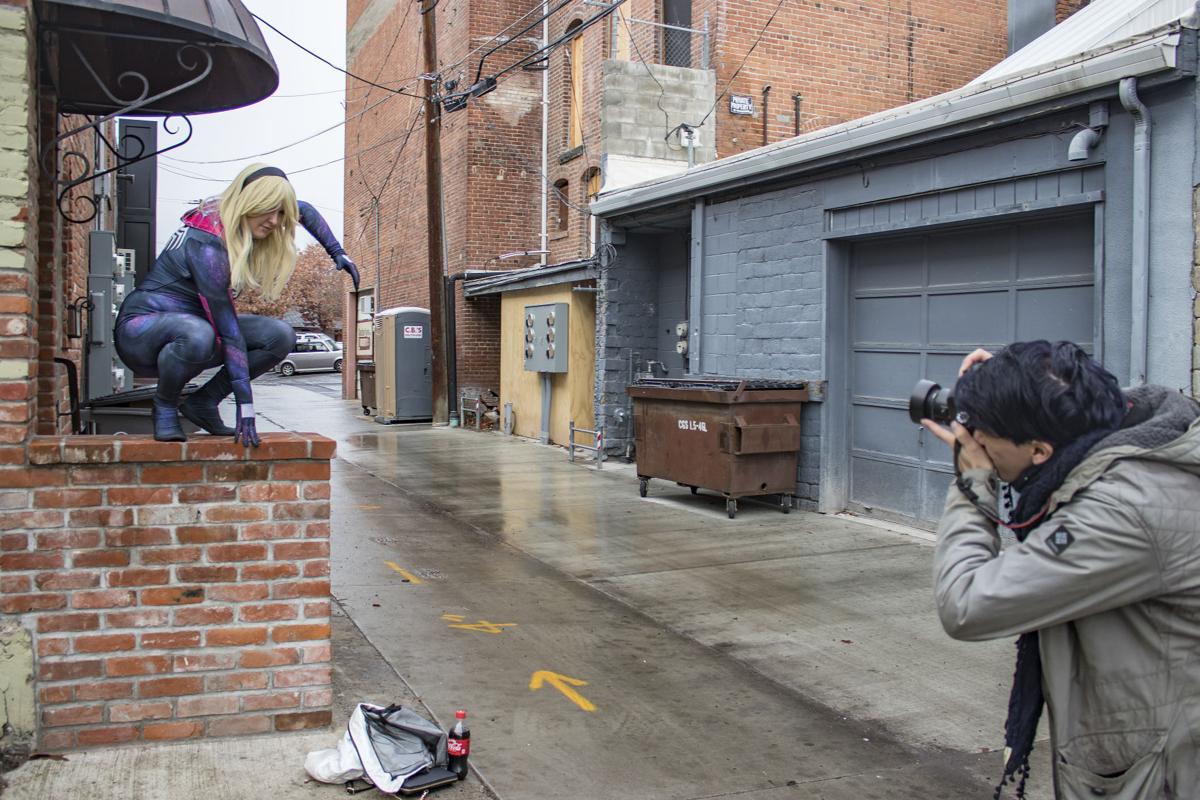 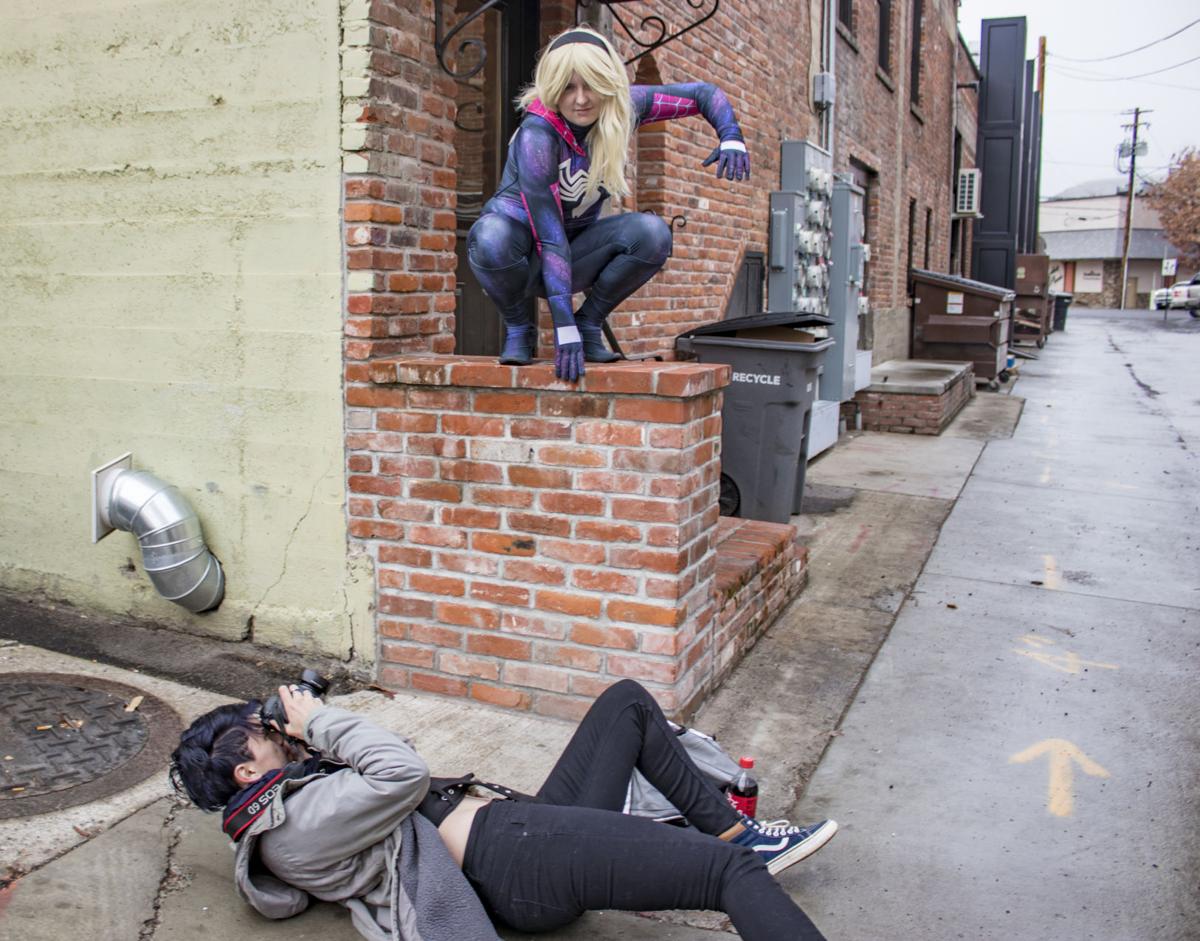 La Grande photographer Shay Witten gets on the ground to capture photos of model Britt McNeil in her cosplay of comic book character Gwenom during a photo shoot Thursday afternoon in La Grande. 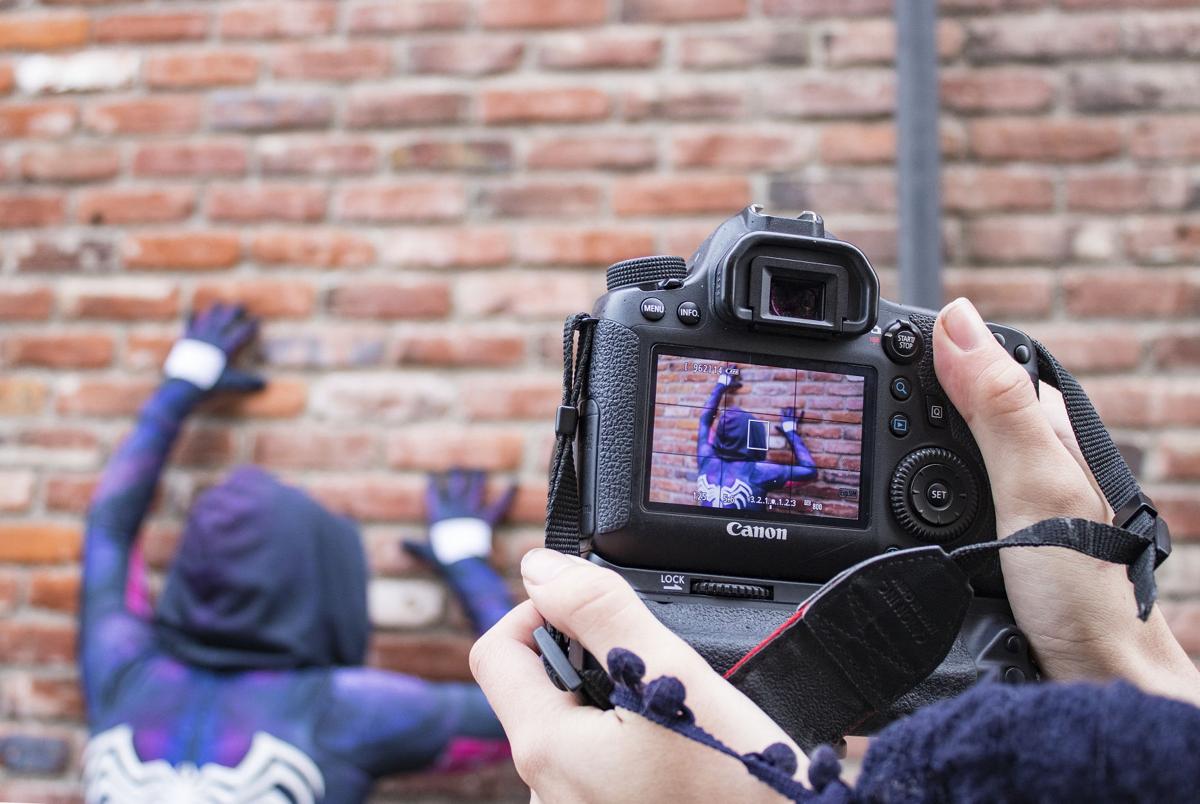 LA GRANDE — Eight years ago, La Grande photographer Shay Witten's friend was designing a fashion line. Witten thought it would be interesting to see what the clothes looked like on models through the lens of a camera. Witten shot the photos and knew there was no turning back.

That experience gave Witten the passion for photographing people, and the local landscape of La Grande provided the backdrop.

"La Grande has great outdoor nature locations, and there are old buildings with a lot of charm," Witten said. "You just have to know where to find it."

Witten, who uses the pronouns they, them and their, has done shoots around La Grande, including Pioneer Park, in the back of the Liberty Theatre and the alleyway between hq and Beckie's Studio of Dance. They like the variety the area provides. Previously, they took photos in Eugene and Corvallis, which they said had, in their opinion, less interesting places to shoot.

The subjects of Witten's photos are most often people. Some models are ones Witten has reached out to, often through social media, to help build both their portfolios. Witten also often receives requests to shoot photos, such as family photos or senior portraits. In either case, Witten said they enjoy working with the subjects to make sure the photos are as good as possible.

"It is really important to make sure your model is comfortable," Witten said. "I help those who haven't done it before with encouragement and give feedback. I like to keep it positive, and it's pretty easy since most of the time the photos come out good."

One of the models Witten has worked with is Britt McNeil of La Grande. McNeil has posed in costumes and cosplay with photographers including Witten and said she enjoys the collaboration.

"I like a photographer who knows what they want and give direction," McNeil said. "I'm all for it. (They) are the one with the vision."

Witten said their vision for photos is often whimsical and rooted in fantasy. While Witten would like to explore doing shoots closer to reality, they said they will always keep an element of imagination in the work.

As a self-taught artist, Witten still is learning about how to take and edit photos and how to get their work out to the public. They have taken a class on digital photography, but they get most of their education through videos on YouTube and tutorials on skill-sharing websites. Witten said it is a cost-effective way to develop the craft and also allows for more creativity.

"I find work I admire and then I'll look up how to do what (that artist) did," Witten said. "It is like building a college course for a lot less money. I am missing the critique I would get from classmates, but I am able to follow a path that makes sense to me. Rather than spending hours photographing architecture, which is interesting, I can focus on what is relevant to what I want to do."

What Witten likes the most about photography, though, is the confidence it can build in them and especially in models.

"I hope (the models) look at themselves and feel that euphoria, joy and feel beautiful," Witten said.

One of Witten's favorite experiences was working with a model who said Witten truly captured them.

To view Shay Witten's photos on social media you can visit @shay.c.photo on Instagram.