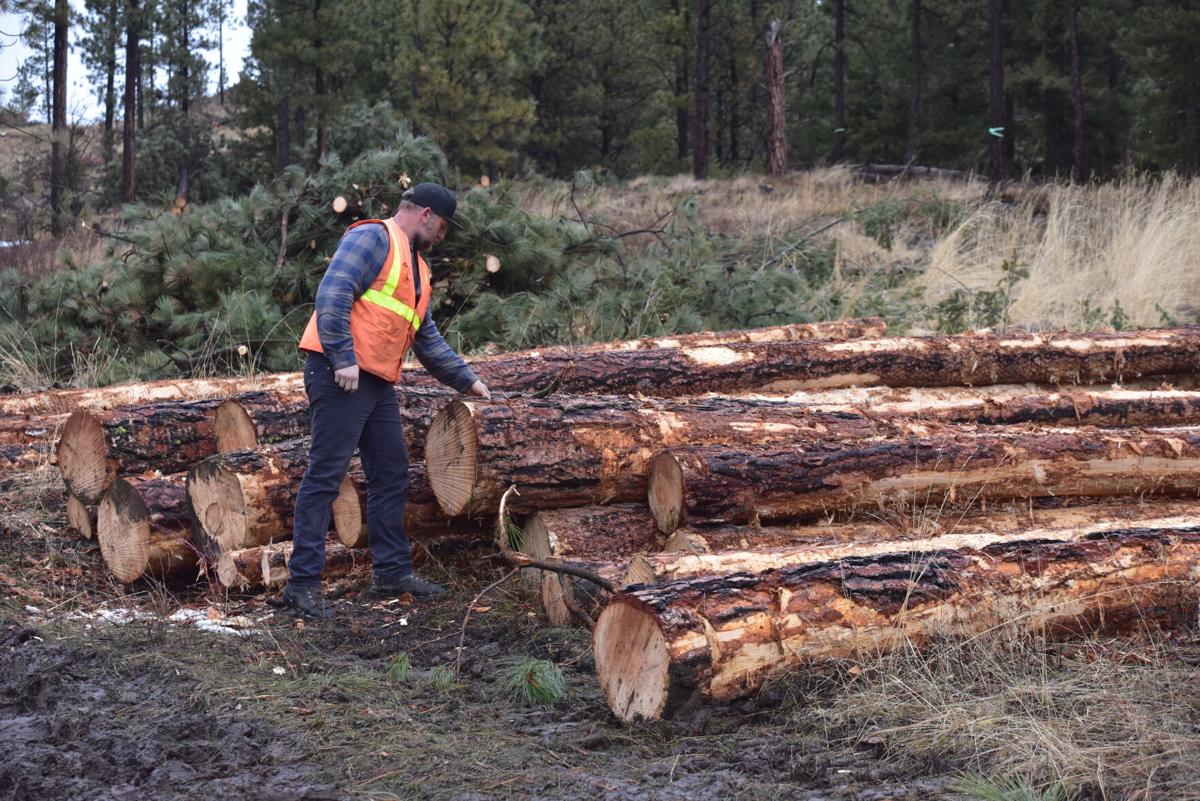 Jesse Reed, co-owner of ReedCo Forestry, examines logs Tuesday, Feb. 2, 2021, along the Mainline Trail in the Mount Emily Recreation Area near La Grande while creating a firebreak. The company later will sell the logs after processing them. 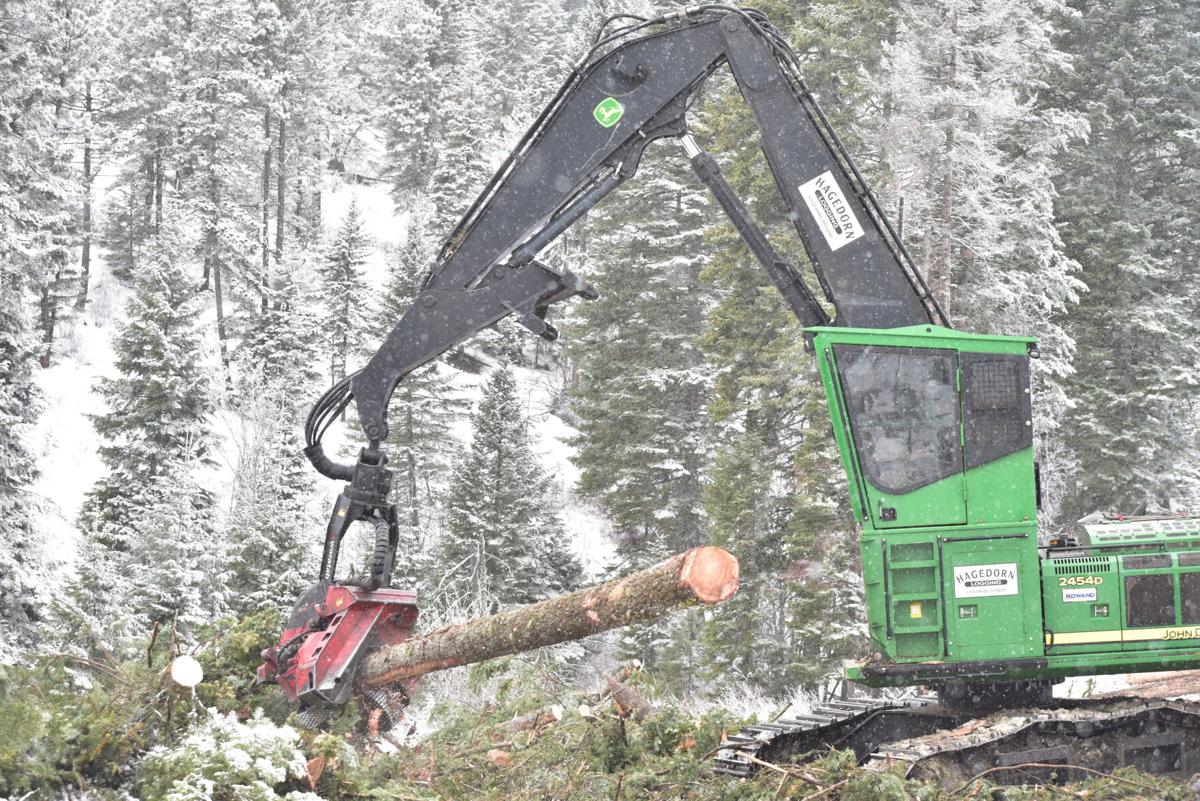 Russ Smith of Hagedorn Logging uses heavy equipment to handle a log Tuesday, Feb. 2, 2021, during the creation of a firebreak in the Mount Emily Recreation Area near La Grande. 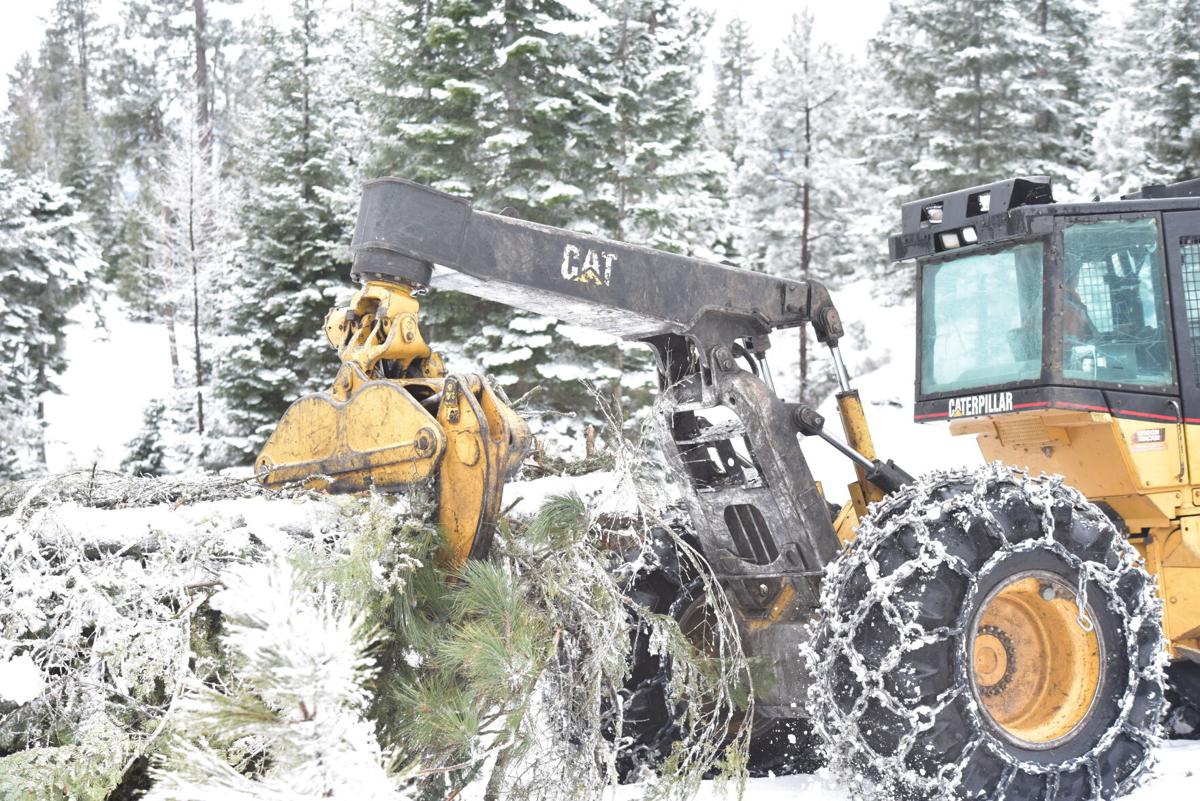 ReedCo Forestry on Tuesday, Feb. 2, 2021, works to create a firebreak at the Mount Emily Recreation Area near La Grande.

Jesse Reed, co-owner of ReedCo Forestry, examines logs Tuesday, Feb. 2, 2021, along the Mainline Trail in the Mount Emily Recreation Area near La Grande while creating a firebreak. The company later will sell the logs after processing them.

Russ Smith of Hagedorn Logging uses heavy equipment to handle a log Tuesday, Feb. 2, 2021, during the creation of a firebreak in the Mount Emily Recreation Area near La Grande.

ReedCo Forestry on Tuesday, Feb. 2, 2021, works to create a firebreak at the Mount Emily Recreation Area near La Grande.

LA GRANDE — Snow is proving to be a friend and foe this winter for Jesse Reed of Union as he helps reduce the odds of a catastrophic wildfire someday striking the Grande Ronde Valley.

Reed is the co-owner of ReedCo Forestry, a company Union County contracted with to help build one of two major firebreaks in the Mount Emily Recreation Area north of La Grande. The firebreak Reed’s company is creating is about 6 miles long on MERA’s Mainline Trail, which runs north-south starting from the recreation site’s parking lot off of Fox Hill Road.

ReedCo is creating the firebreaks through a tree thinning process that involves the use of heavy equipment. Winter is the best time to do this work because much of the area is on rocky terrain, which is hard on equipment, such as blades. The snow and ice now in MERA are covering the rocks, providing a buffer for the equipment, Reed said.

Wintry conditions also are a plus because they keep the ground solid, preventing heavy equipment from creating ruts.

Too much snow, though, can be a complicating factor.

“Sometimes I have to plow the road with a dozer,” Reed said.

Those working with Reed on the firebreak project include Ed Frazer and Dan McKenzie of ReedCo Forestry and Russ Smith of Hagedorn Logging, a subcontractor.

The second firebreak will be along Forest Service Road 3120. Gary Wright of Gary Wright Contracting in Union is creating that break, which will be about a mile long and run on the western edge of MERA.

The firebreaks will cost a combined total of $200,000. A federal National Fire Plan grant, which Union County will receive via the Oregon Department of Forestry, will cover much of the funding. The grant will reimburse Union County for a major portion of its cost of building the firebreaks, said Jamie Knight, Oregon Department of Forestry spokesperson.

Once completed, the trunks of all trees in the firebreaks will be at least 10 feet apart and their crowns 25 feet apart.

The distances make it much less likely for a fire to spread from tree to tree.

“They will break the continuity of fuel,” Knight said.

This means the firebreaks will help stop the advancement of fires from the Mount Emily area into the Grande Ronde Valley and blazes moving in the opposite direction.

The 400-foot-wide firebreaks also will help stop the fires advancing in the crowns of trees. Knight said that’s a major plus.

“There is not a lot firefighters can do when there is a crown fire,” he explained.

Union County Emergency Manager J.B. Brock said building the firebreaks now will save firefighters the time and expense of creating them in the midst of a major fire. And the work is less hazardous and less expensive now, requiring a limited amount of heavy machinery because the contractors have several months to do the work. In the event of a huge blaze, however, crews would have to work quickly to build firebreaks, necessitating the use of much more heavy equipment under potentially dangerous conditions, Brock said.

Union County Parks Coordinator Sean Chambers said he is delighted with the project to make the firebreaks this winter.

“Instead of being reactive, we are being proactive,” Chambers said.

He said the project should wrap up by early spring. Some cleanup work, though, will occur in the fall, including burning slash piles, when there is less fire danger.

Chambers is impressed with the quality of work and said the firebreaks “will be a showcase.”