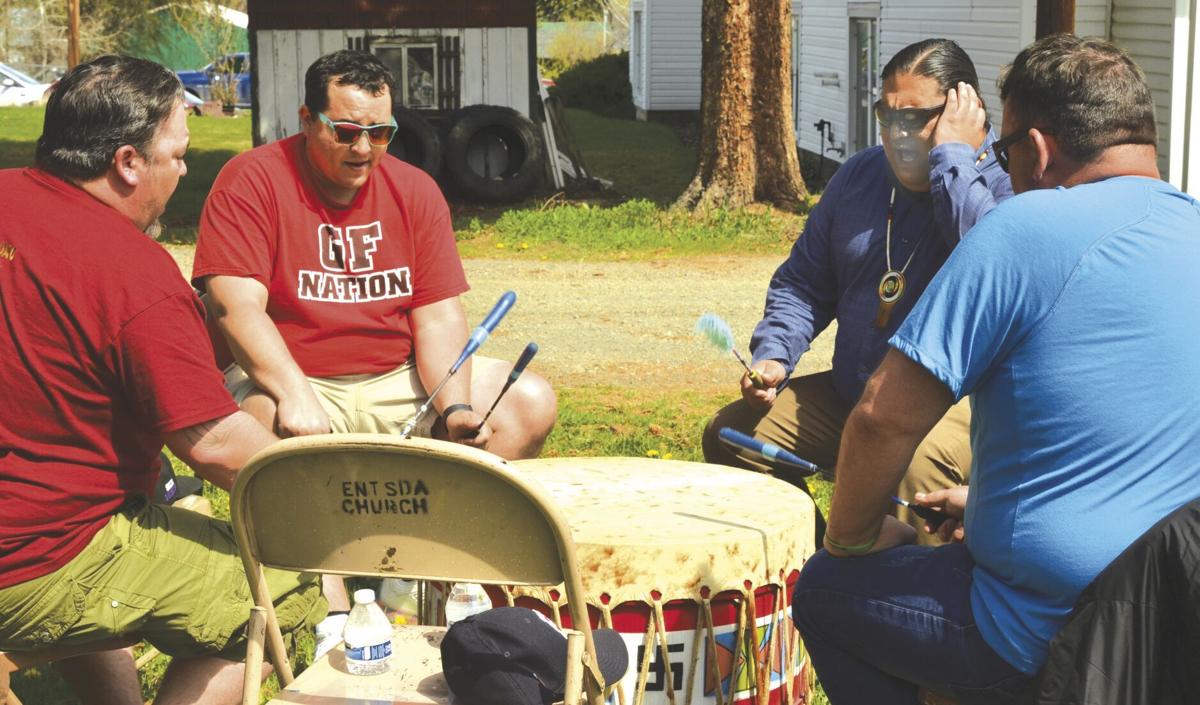 Nez Perce drummers perform during ceremonies Thursday, April 29, 2021, surrounding the turning over of the ownership of the now-closed Wallowa Methodist Church to the tribe. About 60 people, both from the tribe and the church, were on hand for the ceremony. 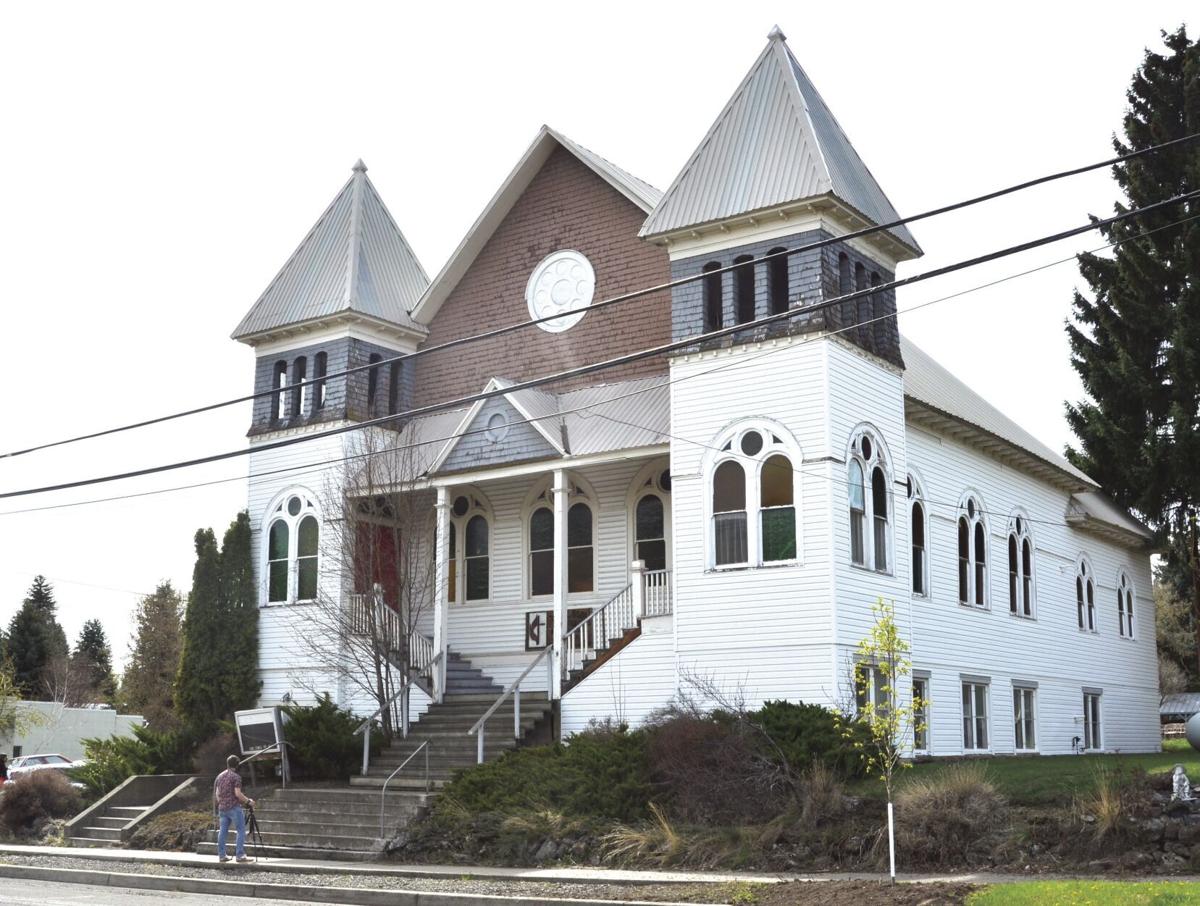 The former Wallowa United Methodist Church, built in 1910, was handed over to the Nez Perce Tribe, the original inhabitants of the land, Thursday, April 29, 2021, during a ceremony between church officials and the tribe. 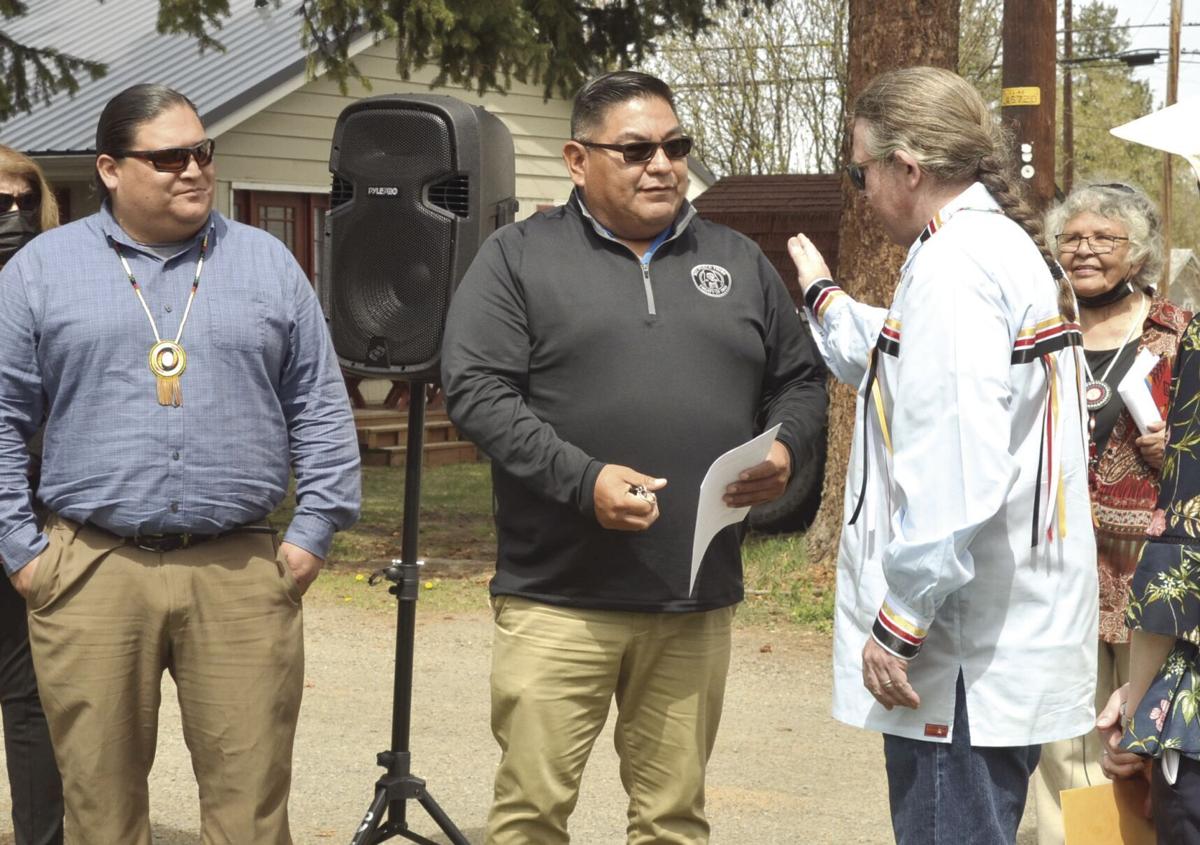 Nez Perce drummers perform during ceremonies Thursday, April 29, 2021, surrounding the turning over of the ownership of the now-closed Wallowa Methodist Church to the tribe. About 60 people, both from the tribe and the church, were on hand for the ceremony.

The former Wallowa United Methodist Church, built in 1910, was handed over to the Nez Perce Tribe, the original inhabitants of the land, Thursday, April 29, 2021, during a ceremony between church officials and the tribe.

WALLOWA — The Nez Perce Tribe took another step toward reestablishing itself in its traditional Wallowa County homeland on Thursday, April 29, when the tribe received the title to the now-former Wallowa Methodist Church.

The ceremony on the lawn behind the church included about 60 people, most of whom were Nez Perce tribal members from the Lapwai, Idaho-based reservation. Also in attendance were members of the United Methodist Church’s Oregon-Idaho Conference, which has held title to the land and building since it closed.

“It’s the transfer of deeds so this church is going back to the Nez Perce Tribe. We’re very honored to be able to be here today for this,” said Casey Mitchell, vice chairman of the Nez Perce Tribal Executive Committee. “Any land that comes back to the tribe is a blessing for us, considering this is originally our homeland that we were pushed out of.”

Mary Jane Miles, a NPTEC member who was tabbed at the last moment to hostess the event, spoke of the gratitude the Nimiipuu — Nez Perce in their own language meaning “the people” — for receiving the land.

“The bishop of the Oregon-Idaho annual conference of the United Methodist Church has indicated this is an opportunity to join in a partnership with the tribe,” she said. “This came to me this morning. I opened up my book and there it was, Luke 1:78-79 (she paraphrased): ‘Our God will bring the rising sun to visit us, to guide our feet into the way of friendship, love, strength and peace.’”

At this, Miles looked to the sunny sky and seemed to acknowledge the fulfillment of prophecy.

“The Nimiipuu — the people — are tied to this land,” she said. “I heard one of the ladies say this morning, ‘We are here forever.’ It just seemed to warm my heart with what is happening today, how favored we are to be getting this land back to our homeland. And the Nimiipuu are here to stay, and I thank you for your drums that just bring in the spirit of the Nimiipuu. ... The Creator is certainly going before us and doing things for our favor. … Most indigenous groups are ‘the people’ and we are the people.”

Speaking to the tribal drummers, who added an air of Nimiipuu authenticity to the occasion, Miles said in a motherly way, “I was telling them this morning to behave yourselves. I watched these boys grow up, so I always tell them that when they’re drumming. I am so very proud of them.”

NPTEC Chairman Shannon Wheeler, who headed the tribal delegation in accepting the property, was particularly moved by the experience.

“As we think about this land and our people moving from here, being forced off of this land, and the year of sorrow as we left,” Wheeler said. “As the story is told, the last Nez Perce who left looked back and thought, ‘We may never see this land again.’ Think about that; put yourself in that place at that time. It’s who we are as the Nez Perce people and the tear that came down their face that day. We didn’t do anything. All we wanted to do was live. All we wanted to do was live in peace. … So for those tears of sorrow at that time — today, if you shed a tear that’s OK because they’re tears of joy now because of the land that is being gifted back to the Nimiipuu. The people’s tears of sorrow on that day will be tears of joy. That memory in our blood that flows to each of us, their sorrow is felt today. Our tears of sorrow and joy today will also be felt by our ancestors in the past. That’s what this means to us today. … Our Nez Perce people will think back and look at this day and remember the Methodist Church and their kindness in recognizing that the first people, the Nimiipuu, and our rightful position here in this land here where we stand.”

He also said the Methodist Church, the people involved in the transaction, will go in the history books alongside others who will be remembered for their kindness.

The final pastor of the church, Kaye Garver, also was on hand. She said when the church closed, the congregation consisted of but five people, down from its peak of about 200 in the 1960s-70s.

“We didn’t have the money to do the needed repairs and pay the insurance,” she said. “It was a sad but necessary thing. The younger people wanted to move out of the county. They wanted to go to the city and everybody else aged.”

“When I came here to interview for the job, I had my doubts as to whether or not this was going to work,” she said. “I pulled up outside and there was an angel stained-glass window and I said, ‘OK, that’s my sign.’ I walked in and there were three people I knew from church camps over on the coast and I’m going, ‘OK, that’s my second sign.’ So this is where God has led me and the church has been just fantastic people.”

Garver recalled how active the church had been in the Wallowa community.

But she thinks it’s fitting the property goes to the tribe.

“It’s a joy that, although we had to leave that building when it closed, it’s now going to the Nez Perce,” she said.

Laurie Day, director of connectional ministries for the Oregon-Idaho Conference UMC, confirmed the desire of the church to cement its relationship with the Nez Perce in turning over ownership of the property.

“The church has a relationship with the Nez Perce Tribe and we checked with them to see if they would like to have the building and the property because they were the original inhabitants of this land,” Day said. “Today is the ceremony where we are returning the property to the Nez Perce.”

She said the cash value of the property didn’t even come into play.

“It was not part of our conversation in returning the property,” she said. “It was out of friendship and it was the right thing to do. It was not about the financial. It wasn’t part of our decision, so it didn’t factor into it.”

Wheeler, who headed the tribal delegation in accepting the property, and Mitchell agreed there are no certain plans for how to use the property. They said the NPTEC is expected to meet to make such plans.

“The building’s old, so we’re not sure if we’re going to keep it,” Mitchell said of the 1910 structure. “The idea is everything’s sky-high right now, as far as property goes. We do have a powwow in July here so we may use this as a camping ground and let the folks use the showers and the bathrooms when the powwow’s going on. We usually have it at the Tamkaliks (the Homeland Project in Wallowa).”

Miles concluded the festivities on a solemn note.

“Now I offer a prayer, in the name of your son, Jesus Christ, for this gathering that we are in as we walk and you go before us that you are leading into a place of ‘peace that passeth all understanding.’ As the world goes, we know there is disunity, but in this particular occasion, we are against that and we rebuke it,” she said. “We thank you for what is happening with our brothers and sisters. We are grateful. We say all of this in your son’s name, Jesus, the Christ, amen.”