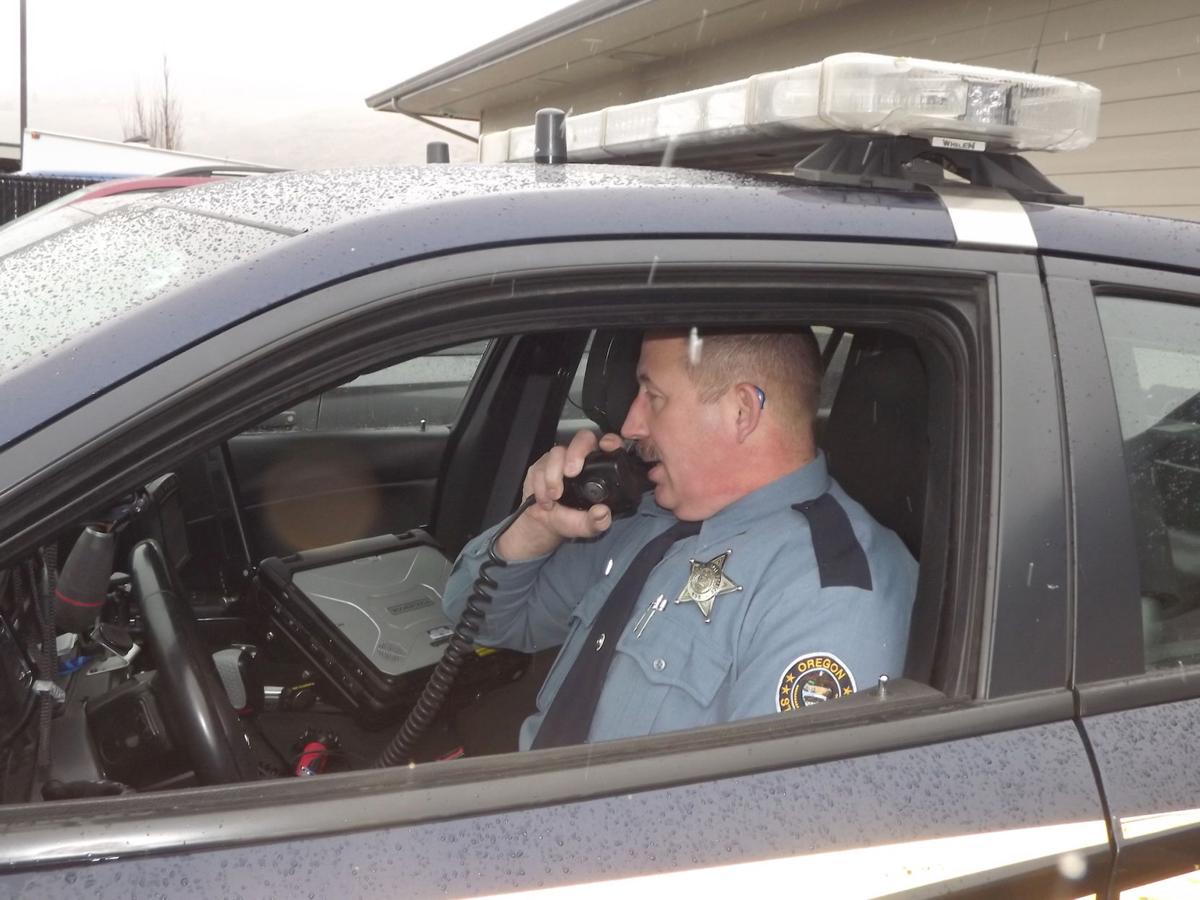 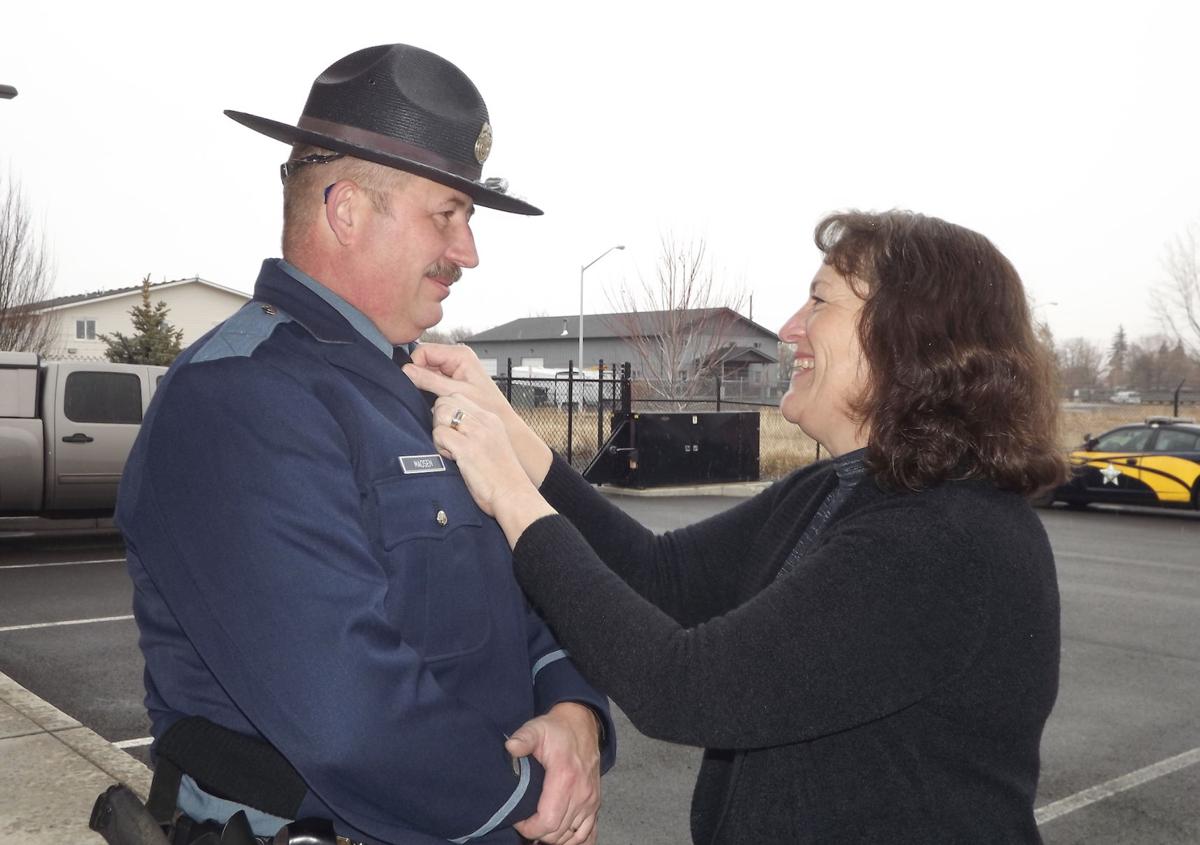 Eric Madsen is looking forward to spending Sundays with his wife, Jeannie. The senior trooper with the Oregon State Police office in La Grande retired Tuesday after a 23-year career.

Eric Madsen is looking forward to spending Sundays with his wife, Jeannie. The senior trooper with the Oregon State Police office in La Grande retired Tuesday after a 23-year career.

LA GRANDE — Three decades ago in far from ideal circumstances, Eric Madsen, then a National Guardsman, received a glimpse of his future.

Madsen was stuck in a ditch in a five-ton unheated military vehicle that had $2 million worth of equipment. A careless truck driver had forced the rig off Interstate 84 near Meacham. Madsen and another Guardsman faced a seven-hour wait for a tow in frigid conditions. A generous Oregon State Police trooper made that wait bearable.

“He checked on us every hour and brought us hot coffee. If it were not for him, I would have had a miserable experience,” Madsen said.

Fast forward, and Madsen is a retiring OSP senior trooper who wrapped up a 23-year career Tuesday, one in which he tried to touch the lives of others the way that trooper did his in the late 1980s.

Madsen succeeded in a big way in the eyes of people such as Wade Foersterling of Baker City. Madsen helped Foersterling change a blown tire Dec. 21 on I-84.

“Not only did he get down in the dirt and rocks to help us change the tire. When the spare was (found to be flat), he offered to call the tire store to see if we could find a used tire and give me a ride to get it,” Foersterling wrote in a letter sent to The Observer. “He tried to help us in any way he could. He didn’t need to do as much as he did, and for that, we will always have his kindness in our hearts.”

Madsen said the opportunity to help people often made his job a joy.

“I have been blessed to have a career I loved,” he said.

Sgt. Kyle Hove credits Madsen with being an outstanding trooper. Hove, who also works in the La Grande office, noted Madsen is a leader, an excellent teacher and willing to put in extra hours when the need arises.

“He is always kind and fun,” Scott said.

Madsen became a drug recognition expert with state police. In this role he has been responsible for determining if people are under the influence of drugs when driving. He has found many people do not realize they can remain impaired by drugs even after the hallucinogenic effects wear off.

“People are impaired much longer than they feel the effects,” he said.

He noted people who use marijuana can be impaired at least a day after taking it. One reason is marijuana now is much more potent than it was when he joined the state police. He explained the levels of THC, the psychoactive chemical in marijuana that makes people high, averaged about 4% when he was a new trooper. That level has soared, he said, noting that he recently has seen some forms of marijuana with THC levels as high as 93.7 percent. He said contrasting marijuana of yesteryear to that of today is like comparing beer with 5% alcohol content to 150 proof whiskey.

Madsen has seen firsthand how drug addiction destroys lives, but he does not hold many caught in its throes completely responsible.

“Some didn’t know any better. Their parents did this (took drugs),” he said.

By the same token, Madsen has seen young people with tremendous potential and family support who fell into the trap of drug addiction.

“They made bad choices,” said Madsen, who made a number of presentations in schools during his career urging young people to stay clear of drugs.

Madsen has dealt with many impaired drivers and plenty of others who were simply driving too fast. When pulling over these drivers, Madsen has made a point of asking their reason for speeding.

“If there is a medical emergency I want to know right away so I can help them get to the hospital as soon as possible,” Madsen said.

When counseling drivers about infractions, he said he aimed to get them to understand they are putting others at risk along with themselves. He pointed out, for example, that many of those injured in construction zone crashes are the workers who have no protection along with the drivers of speeding vehicles.

Madsen said as a law enforcement officer he has long strived to treat everyone with respect. He follows a mantra from an OSP officer he worked under in John Day early in his career.

Madsen said he has enjoyed a rewarding career with the OSP because of the tremendous people he has worked with and the support of his wife of 28 years, Jeannie. The couple, the parents of five children, are looking forward to spending more time together, especially on Sundays, when Madsen often had to work.

“Being able to spend Sunday with my wife and family is very important to me,” he said.

Madsen also is retiring because he has worked long enough to qualify for full-time retirement benefits. He said if he worked as an OSP trooper past this point and he should die, the retirement benefits his wife would receive from the state police benefit fund for spouses would be cut significantly.

Despite his retirement, Madsen said his days in law enforcement are not over, not by a long shot.

Madsen, who lives in Elgin, soon will serve as a parole and probation officer for Wallowa County. It is a new challenge he is embracing. He will no longer be on patrol but will be continuing to do what he has don throughout his career.

“I’m looking forward to helping steer people in the right direction,” he said.