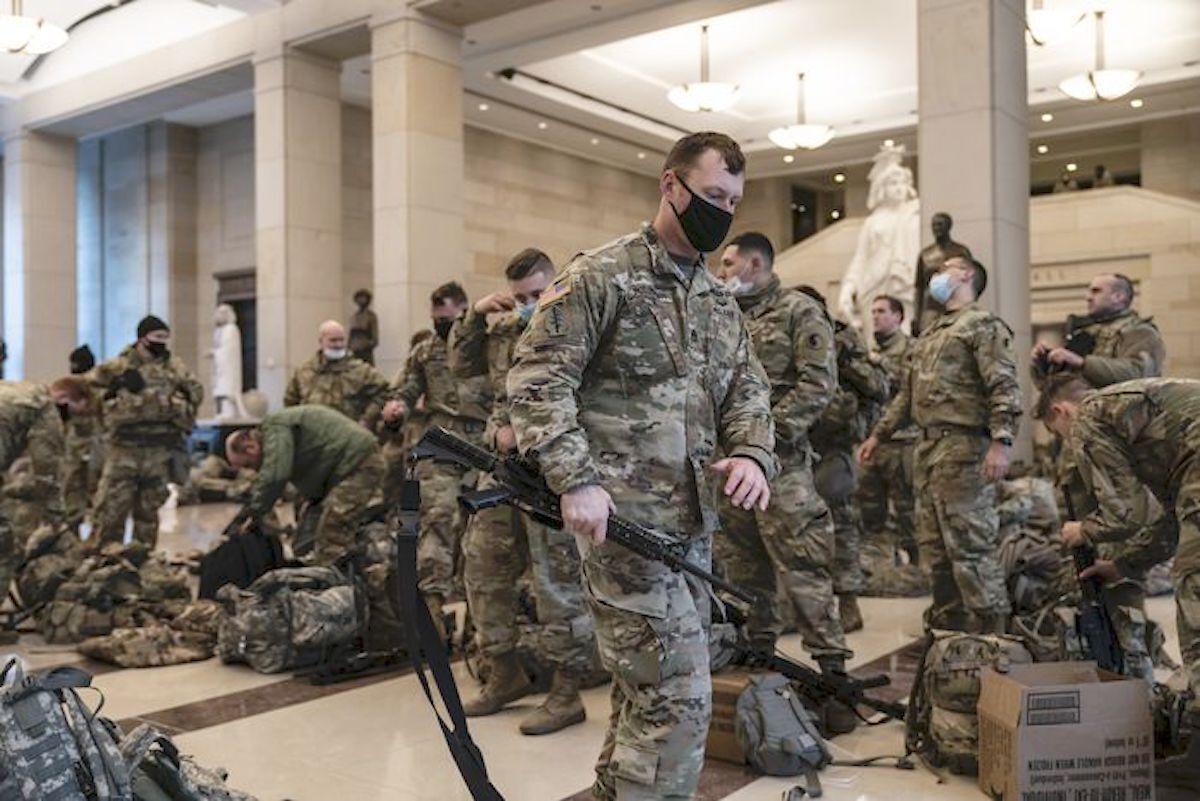 Hundreds of National Guard troops inside the Capitol Visitor’s Center prepare to reinforce security at the Capitol in Washington, D.C., Wednesday, Jan. 13, 2021. The House of Representatives on Wednesday passed an article of impeachment against President Donald Trump for his role in inciting an angry mob to storm the Capitol last week. 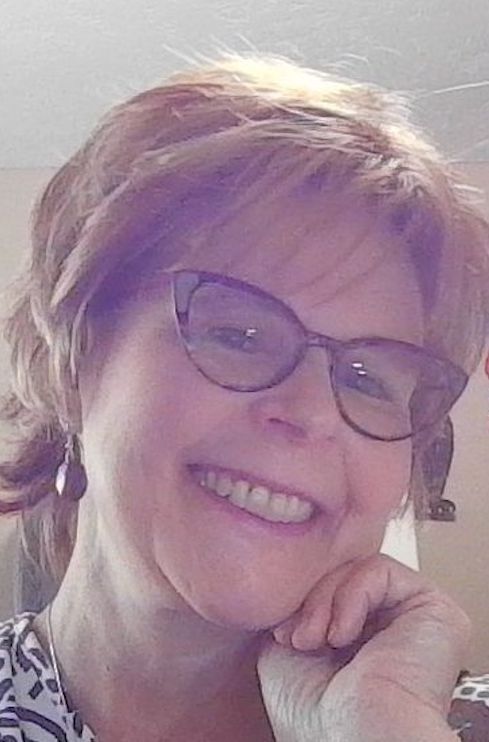 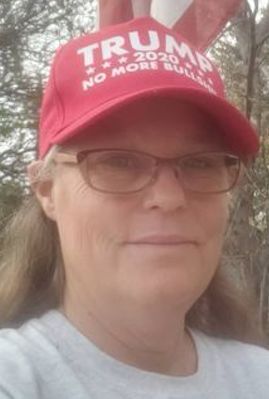 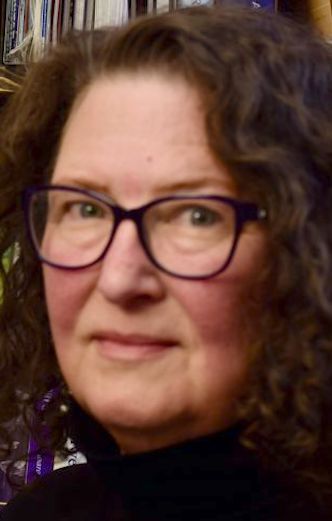 LA GRANDE — The deadly storming of the U.S Capitol in Washington, D.C., on Wednesday, Jan. 6, 2021, has left people all along the political spectrum in La Grande feeling distressed and angry.

“To see citizens fighting each other just broke my heart,” said Sharon Porter of La Grande, a retired educator. “I believe in the goodness of the world and this was not it.”

Porter is one three people who shared their perspective on the incident after responding to a post on The Observer’s Facebook page.

Porter, 70, has seen the majesty of the Capitol firsthand.

“The building is a thing of beauty,” Porter said. “To see the building desecrated was too much for me. I was almost in tears because of the pain of seeing this. This is our Capitol.”

She also said she felt dismay that some of the people involved in the attack where carrying American flags.

“The flag represents all Americans, not just those who are seditionists,” Porter said.

The retired educator also was upset to see some of the rioters carrying Bibles.

“They were not doing what Jesus would want us to do,” she said.

Porter, who considers herself part of America’s mainstream, said she believes it is crucial everyone strive to keep an open mind regardless of where they stand in the world of partisan politics.

“It is very important that we try to understand everyone’s opinion. This is critical,” Porter said.

President Donald Trump is being blamed for the insurrection primarily because during a rally he asked his supporters to go to the Capitol and protest the counting of electoral votes on the floor of the U.S. Senate.

Lori Hoagland, 48, of La Grande, believes it is wrong to hold Trump’s speech responsible. She said she does not believe Trump said anything that should have incited violence.

“I listened to every word (of Trump’s speech),” said Hoagland, an Independent and an ardent Trump supporter.

Hoagland said Trump asked his supporters to march peacefully to the Capitol.

A homeschool teacher, Hoagland said she thinks the people responsible for the Jan. 6 violence, which claimed five lives, were individuals who oppose Trump. Hoagland said she believes they damaged the Capitol in hopes that Trump supporters would be blamed for it. She said Trump’s supporters are too patriotic to resort to the violent steps the insurrectionists took.

“We love our country. To take over the Capitol would be un-American,” she said. “We are Americans, we do not burn up a town and destroy and occupy.”

Hoagland said she beleives the antagonists were financed by wealthy members of corporate America who oppose Trump.

“The past few days will go down in history as the time when half of our country cheered the use of corporate power to silence the other half of the country,” she said.

Denise Elizabeth Stone of La Grande first learned of the riot at the Capitol while working on her computer at home and listening to a television news report.

“I was pretty horrified by the violence, but I was not surprised because anger has been building up for a long time,” Stone said.

She said this has been occurring for decades as people have become more partisan. Stone said many have developed the mindset that if individuals do not think like they do then they are the enemy.

Stone, 67, compared the attack on the Capitol to the Watergate scandal, which forced President Richard Nixon to resign in 1974. She said she supported Nixon and thought he should stay office. She changed her mind later after the public learned the truth about what Nixon had done. Watergate was terrible, she said, but it does not compare to what happened on Jan. 6.

“This is so much worse than Watergate,” Stone said.

She believes social media is largely responsible for today’s highly charged political atmosphere, noting it tends to bring out the worst in people, some who make rude and cutting remarks on it.

She noted Trump, with the aid of social media, has not hidden his antagonistic side throughout his presidency.

“Trump has been out front about who he is. He has shown us who he is,” Stone said.

She said this makes politicians and others feel free to also let their worst instincts to take over.

Stone also said she thinks the COVID-19 pandemic, which has forced people to stay home, has sparked violent outbursts such as the events on Jan. 6.

“The pandemic put people in a pressure cooker,” Stone said. “It isolated people with others who think the same way.”

Some have said the riot in the Capitol is representative of American character. President-elect Joe Biden said this is not who we are, and Stone said she hopes he is right.

“I would like to believe that people are good,” said Stone, a retired psychotherapist and rehabilitation therapist who moved to La Grande in 2005 after retiring.

She said she hopes in the future people will interact more with those who have different viewpoints and become more open-minded in the process.

“I have liberal and conservative friends. It makes me a better person,” Stone said. “We need to talk to people who are not like ourselves. Doing so gives me a view I wouldn’t get if I am with people who think only as I do.”

WASHINGTON — A majority of the U.S. House voted Wednesday, Jan. 13, to impeach President Donald Trump for a second time, just a week after he encouraged loyalists to "fight like hell" against election results and a mob of his supporters stormed the U.S. Capitol.

The House vote on an article of impeachment for incitement of insurrection still was underway Wednesday, but the Democratic-led House had secured enough votes to impeach Trump. Some Republicans joined Democrats in voting to impeach the president.

During debate before the vote, House Speaker Nancy Pelosi asked Republicans and Democrats to "search their souls." Trump is the first American president to be impeached twice.

The impeachment proceedings came one week after a violent, pro-Trump mob breached the Capitol, sending lawmakers into hiding and revealing the fragility of the nation’s history of peaceful transfers of power. Five people died.

Trump has taken no responsibility for the riot.