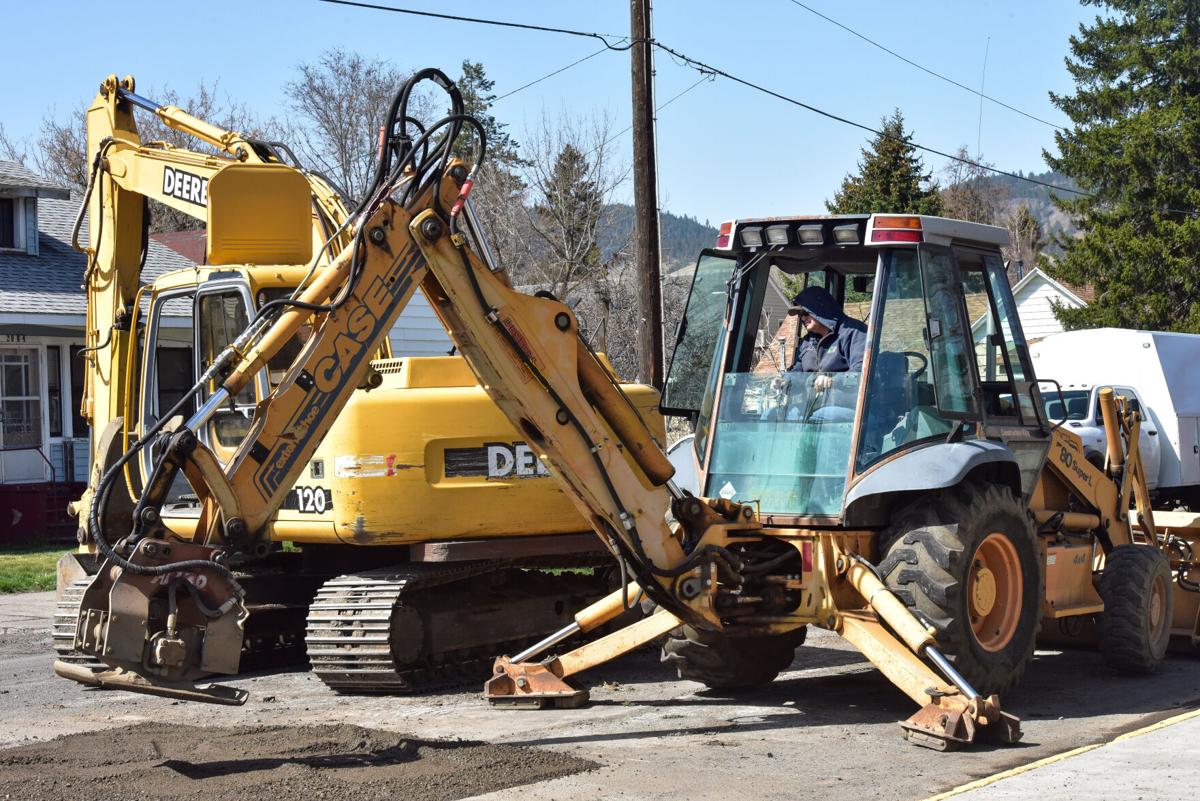 Members of the La Grande Public Works Department do prep work on Tuesday, April 6, 2021, on Second Street for a project to replace a water main and upgrade the road. 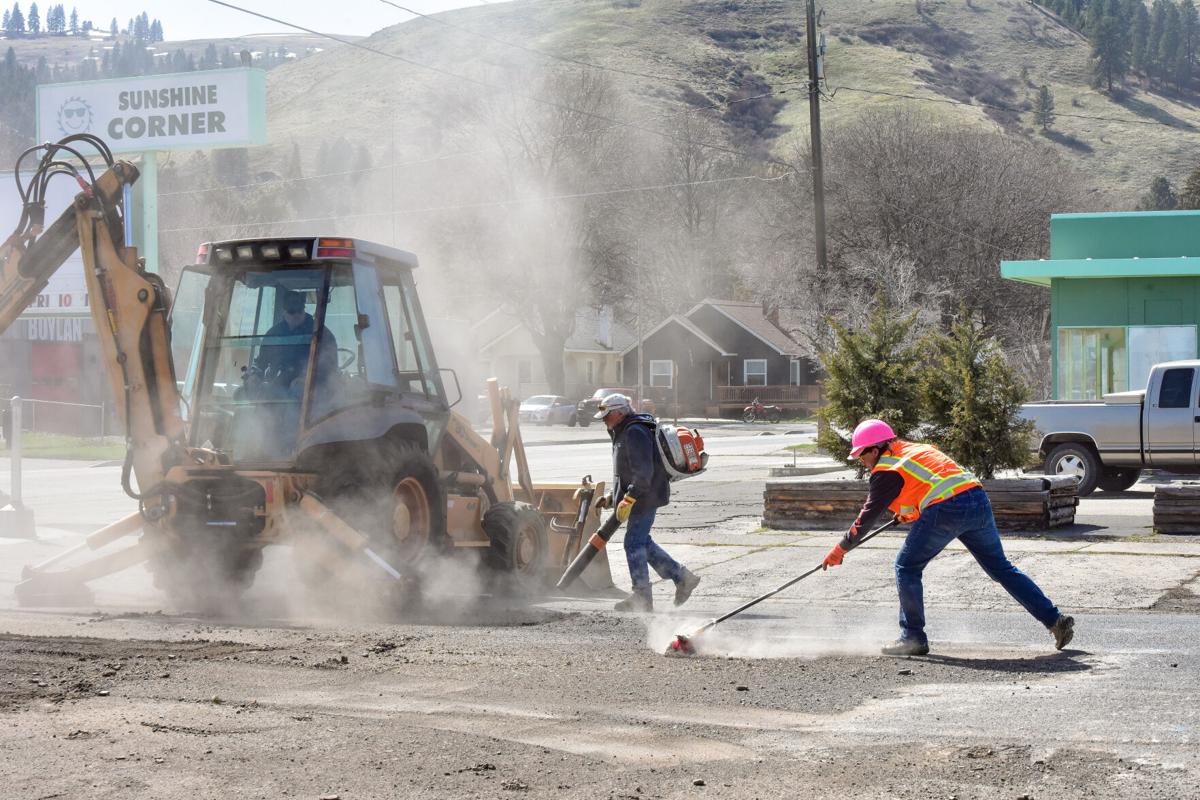 A La Grande Public Works Department crew on Tuesday, April 6, 2021, prepares Second Street for a project to replace a water main and upgrade the road. The project will tear up 1,100 feet of the street.

Members of the La Grande Public Works Department do prep work on Tuesday, April 6, 2021, on Second Street for a project to replace a water main and upgrade the road.

A La Grande Public Works Department crew on Tuesday, April 6, 2021, prepares Second Street for a project to replace a water main and upgrade the road. The project will tear up 1,100 feet of the street.

UNION COUNTY — Road paving crews will be hard at work this spring and summer in the La Grande and Meacham areas.

Major road restoration projects are set to be conducted on Second Street in La Grande and on Interstate 84 from Meacham east for 3.5 miles.

The Second Street work will run from Spring Street to Adams Avenue, a total of 1,100 feet, according to La Grade Public Works Director Kyle Carpenter. This stretch of Second Street will be torn out and replaced with new asphalt. Carpenter said this portion of the road has not had major repair work for decades and is badly in need of an upgrade.

“It is in good condition for its age, but it is time,” he said.

The Second Street project will involve more than replacing roadway. The city also will remove and replace an old water main as part of the project. The 18-inch diameter steel water pipe, an integral part of La Grande’s water supply system, is old and in declining condition, Carpenter said. It will be replaced with a new water main made of ductile iron.

Carpenter said it will be much more efficient to replace the water main this year while the street is torn up.

“This is the preventive maintenance,” he said.

The Second Street work, which is scheduled to be completed by July, will be done in two phases — first from Spring to Washington avenues, and then from Washington to Adams avenues.

Preliminary work involving the replacement of the water main is underway. The project will not hit full stride until Monday, April 12, when the city closes Second Street from Spring to Washington avenues. The closure also will include the intersections at Spring and Main avenues. Crews will begin the excavation of the existing roadway and the removal of curbs, Carpenter said.

The 3.5 miles of road restoration on Interstate 84 this spring and summer will be part of a two-year, 10-mile project during which the Oregon Department of Transportation will replace the roadway’s surface up to the Spring Creek exit, 18 miles northwest of La Grande.

Tom Strandberg, an ODOT spokesperson, said the work is necessary because severe winter weather and heavy use of tire chains when winter conditions are present have rutted the roadway’s asphalt surface.

“This creates hazardous driving conditions when water, snow and ice collect in the ruts, cracks and potholes,” he said.

The westbound and eastbound lanes for slow traffic, now made of asphalt, will be rebuilt with concrete and the fast lanes will receive new asphalt.

Strandberg said concrete, which is longer lasting than asphalt, is the best fit for the slow lanes because they have such heavy truck traffic.

“The slow lanes receive the most punishment,” he said.

Work is beginning now on the project, which will have a major impact on traffic. Strandberg said the work will be done on entire portions of eastbound and westbound lanes at one time. This means when a section with two westbound lanes is being restored the two parallel eastbound lanes will have traffic traveling in opposite directions.

Strandberg said cones will be installed to divide the two lanes of traffic. The speed limit is being reduced from 70 to 50 mph in the work zone of the project to protect travelers and those working at the site. There also will be increased Oregon State Police presence at times to help remind everyone to slow down, according to Mike Remily of ODOT, the resident engineer for the project, in a press release.

Remily is encouraging travelers to be careful and avoid hurrying while traveling through the work zone.

“On behalf of our contractor’s staff and ODOT staff, I ask that you be patient and cautious through the work zone and remember the end result of the inconvenience will be a brand-new, durable, smooth pavement,” he said in the release.

ODOT is working with the Oregon State Police to arrange for it to have an increased presence at the work site, Strandberg said, to boost safety.

The I-84 project will cost $54 million. The funding will be provided by the state and federal governments.

A portion of the funding also will cover upgrading traffic signals in Umatilla County in areas along state routes in or near the communities of Hermiston, Pendleton, Umatilla, Stanfield and Milton-Freewater.