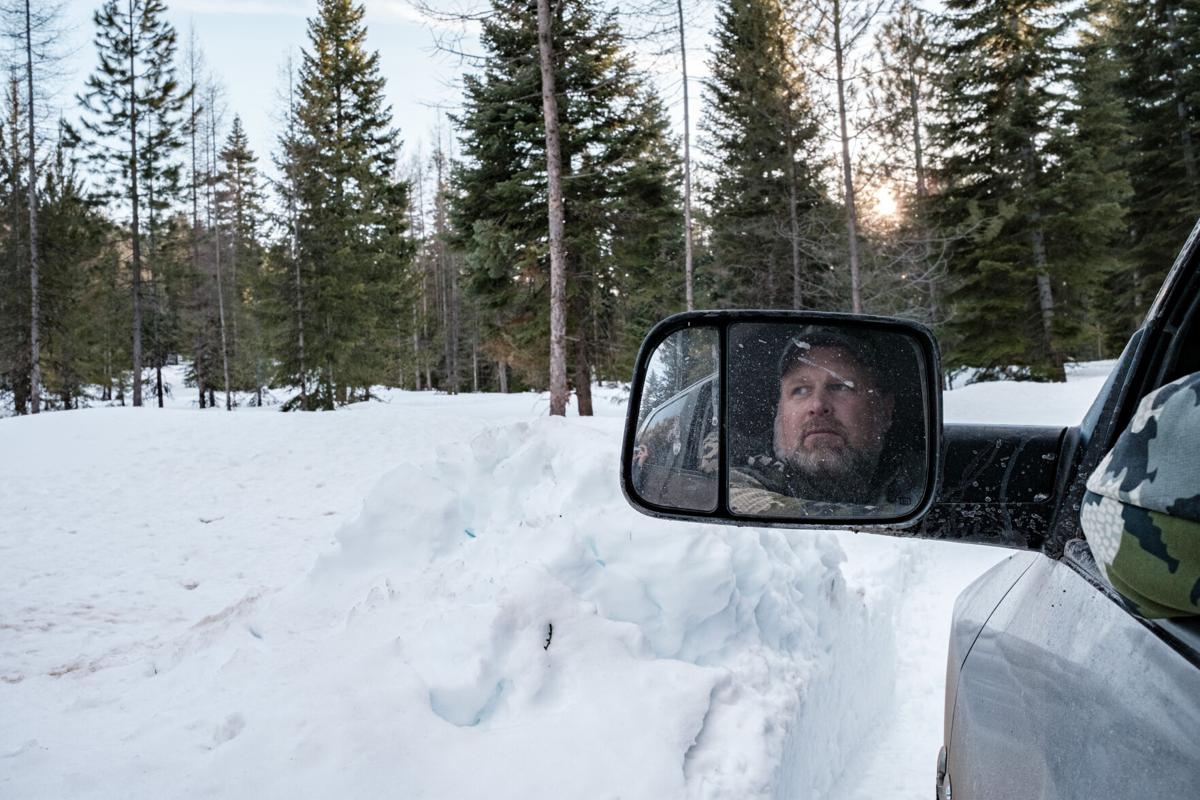 Steve West on Thursday, March 4, 2021, looks toward a forest on the Ponderosa Ranch property he has been working to own. West has been grooming the forest near La Grande for wildlife as part of the agreement that places 250 acres into a conservation easement in exchange for the rock quarry on the property. 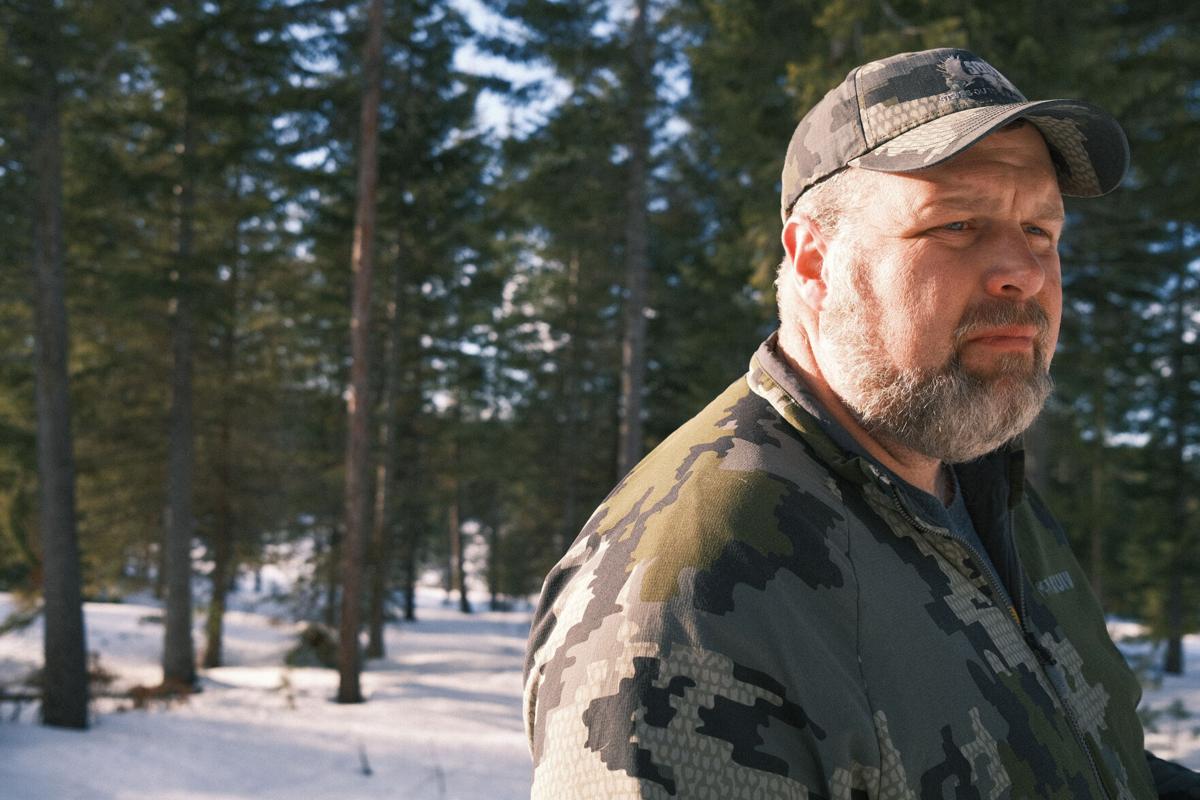 Steve West, who manages the Ponderosa Ranch near La Grande, pauses in front of a thicket of trees that were cut over the winter Thursday, March 4, 2021. West says the goal was to thin the forest and make the area more appropriate for wildlife. 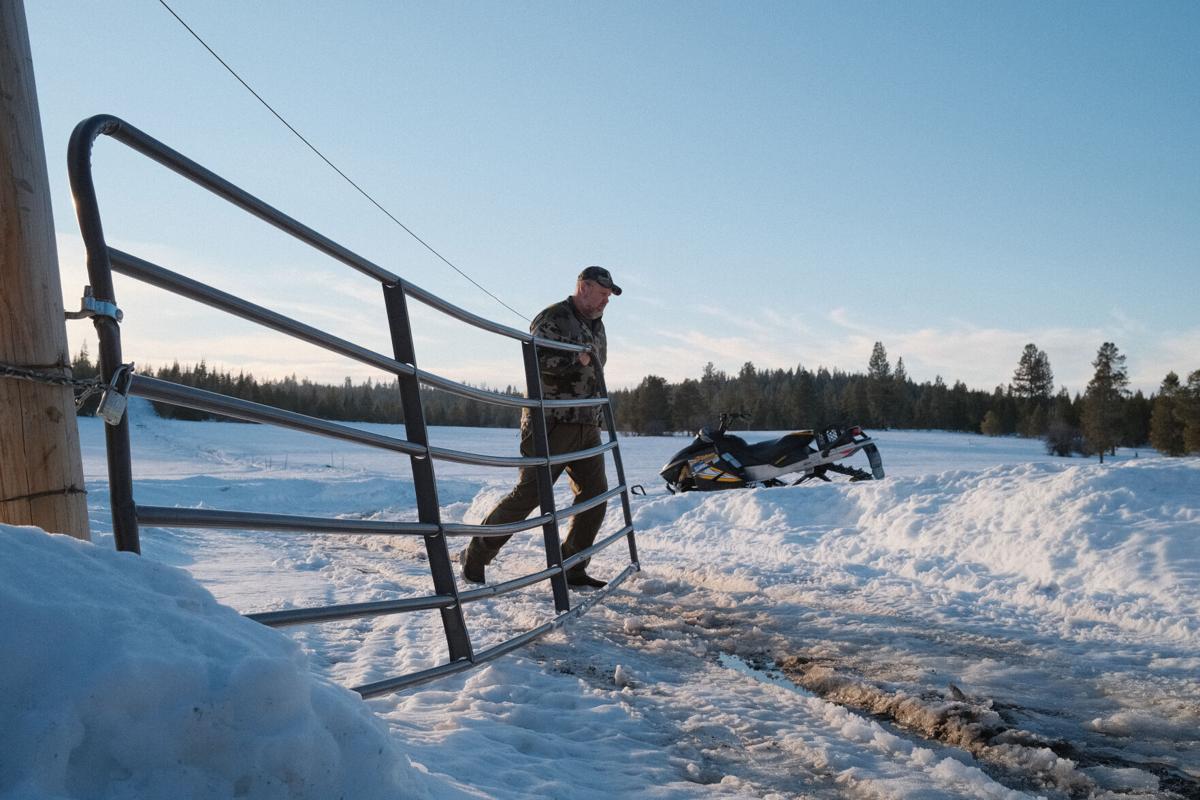 Steve West closes the gate to the Ponderosa Ranch property Thursday, March 4, 2021. The ranch, which includes a rock quarry near Perry, spans 4,885 acres in the skyline above La Grande.

Steve West on Thursday, March 4, 2021, looks toward a forest on the Ponderosa Ranch property he has been working to own. West has been grooming the forest near La Grande for wildlife as part of the agreement that places 250 acres into a conservation easement in exchange for the rock quarry on the property.

Steve West, who manages the Ponderosa Ranch near La Grande, pauses in front of a thicket of trees that were cut over the winter Thursday, March 4, 2021. West says the goal was to thin the forest and make the area more appropriate for wildlife.

Steve West closes the gate to the Ponderosa Ranch property Thursday, March 4, 2021. The ranch, which includes a rock quarry near Perry, spans 4,885 acres in the skyline above La Grande.

UNION COUNTY — Steve West has a goal to own the Ponderosa Ranch in the Mount Emily area overlooking the Grande Ronde Valley.

But to accomplish that, he said, he needs to get the OK from the Union County Planning Commission for a rock quarry with railroad access at the bottom of Robb’s Hill Road near Perry and about a couple of miles from La Grande.

Plenty of locals, however, don’t want the quarry, fearing it will produce numerous negative effects, from noise and dust pollution to harming the nearby Grande Ronde River. West, who produces the TV series Steve’s Outdoor Adventures, said he has been working diligently the past two years to ensure that is not going to happen if the quarry becomes reality.

“We’re going to have everything there to not negatively impact the valley,” West said. “This has been blown way out of proportion.”

West and others get to make their cases on the quarry project to the planning commission during a public hearing Monday, March 8, at 7 p.m. via teleconference.

West explained he is friends with Jim Smejkal of Banks, who bought the ranch in 1998. Smejkal about 10 years ago decided to sell the ranch, West said, and he wanted to buy it. But Smejkal, who is turning 83, “doesn’t like to let anything go,” West said, so they came up with a deal that he would eventually buy the property from Smejkal’s sons.

Except the ranch costs more than West said he could afford. The website Lands of America, which lists farms and ranches for sale, shows a $3.7 million price for the Ponderosa.

West also said the ranch is not a tourism hotspot, but rather a special locale where he sometimes brings veterans or disabled youth to hunt. Creating a 250-acre rock quarry, though, where Robb’s Hill Road meets Interstate 84, would allow him to buy the ranch.

If he can’t buy the ranch, he said, the owners will divide the property into 240-acre parcels that anyone can buy and develop housing on.

“That’s bad,” he said. “I’m doing everything I can to prevent that.”

The quarry and the easement, he said, are the “long-term plan to protect this mountain.”

West said he knows well the concerns locals have about the quarry, and the project has taken those seriously and studied the right — and wrong — ways to build and operate a rock quarry. The 400-plus pages of the project’s application to the county, he said, goes through the numerous issues.

“We’ve addressed them all,” he emphasized.

The company studied berms at other quarries, for example, to understand how to dampen the noise at the pit.

“If you hear it, it will be a hum in the far distance,” he said.

The location of the quarry near Interstate 84 has to meet Oregon Department of Transportation’s mandates for dust control. He said there would be plenty of water on site to manage dust and they could bring in water trucks as well.

“We are committed in our business plan to dust mitigation at the highest levels,” West said.

The project is to expand the small, 15-acre quarry now at the site, he said, but expanding the pit to 250 acres will take a long time.

“It could be a hundred years before we get to the top of the hill,” West said, when the quarry would be visible from Perry.

While people from La Grande won’t be able to see it, drivers on I-84 would.

“But,” West said, “it’s not going to be as big an eyesore as people think.”

He also said the project has some local support, and Union Pacific Railroad is willing to get on board.

The railroad in September 2019 sent West a letter stating it reviewed the request from Universal Exports Limited, the company out of Bozeman, Montana, seeking rail service for the pit. Union Pacific reported it was “pleased to notify you that we are looking forward to working with you on developing new rail service to this location.”

Union Pacific also stated it was moving forward with track authorization based on the conceptual plan and as long as the project can meet certain requirements, including the design and installation of track and powered switches that meet UPRR standards.

West said this project for more than two years has spent “hundreds of thousands of dollars and hundreds of man hours” to make sure the quarry is done the right way.

That includes meeting the Oregon Department of Fish and Wildlife’s mitigation requirement to improve 250 acres of wilderness as an offset for the quarry. That mitigation, West said, is at the top Mount Emily in what he described as “uber critical” elk habitat. The work has involved tree thinning and the installation of lay-down fencing, which is easy to erect to contain cattle that graze the area May 15 to Aug. 1.

“We use the cattle as a tool to prevent catastrophic wildfire,” West said. “My intention is to do this project for the long-term betterment of the wildlife.”

West said he even would be willing to take anyone up there to show them the work that has gone into mitigating the quarry proposal.

Laying it all out

The debate over the quarry gets a public airing at the Union County Planning Commission’s meeting March 8 to consider approving the project. West said he of course will attend over the phone as will other supporters to plead for approval. The opposition also will get to make a case.

If the county decides to nix the deal, West and his side could appeal to the Oregon Land Use Board of Appeals. West said that would cost more money and require another attorney and could take years for a decision. In that scenario, West said, his side would take a hard look and see if the fight would be worth the cost.

How to participate in the public hearing

The Union County Planning Commission is holding a public hearing Monday, March 8, at 7 p.m. via teleconference to consider approving the application for a large quarry at the juncture of Robbs Hill Road and Interstate 84 near Perry. To listen to or participate in the hearing, call 253-215-8782 or 669-900-6833 and enter meeting identification No. 995 6180 8582.