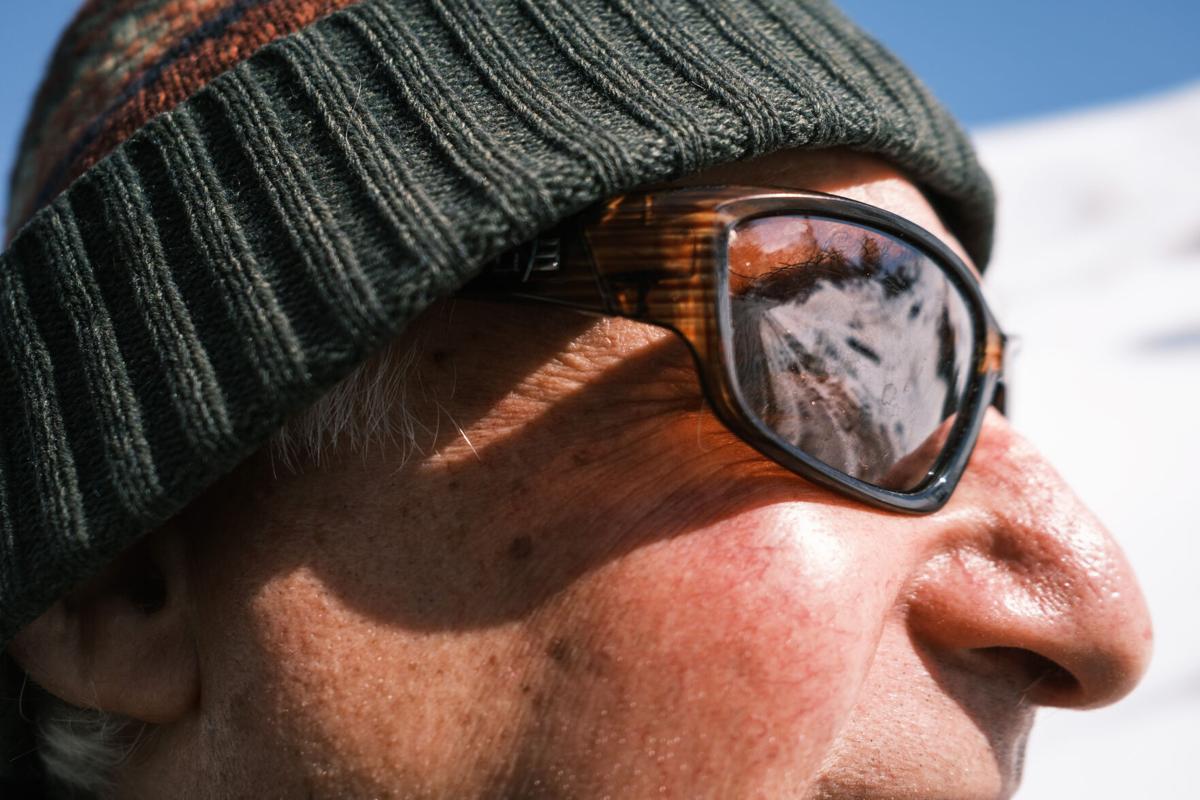 The site for the proposed Ponderosa Quarry reflects in the sunglasses of David Moyal on Tuesday, March 2, 2021. Moyal is a vocal opponent to the project that would sit less than a mile from the community of Perry. “With the dust, and noise and the pollution — it’s unenviable,” he said. 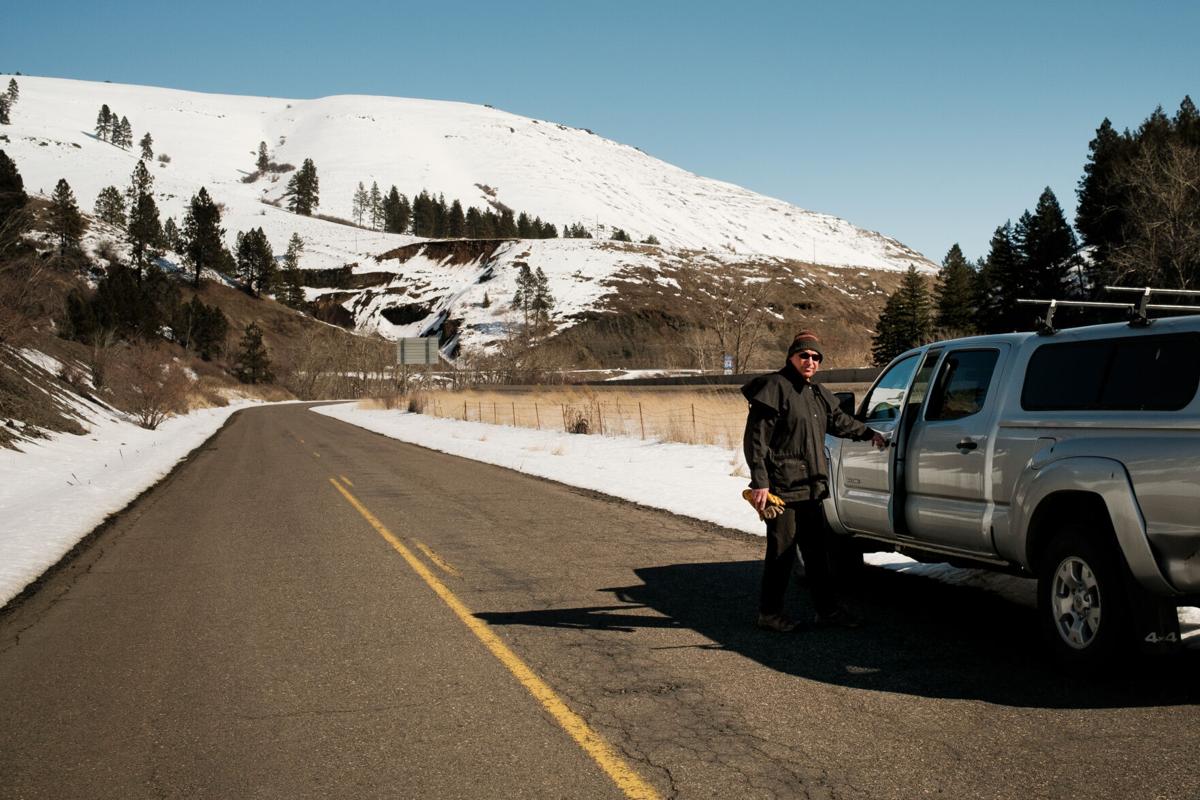 David Moyal of La Grande pauses Tuesday, March 2, 2021, outside Perry near the site of a proposed quarry. Moyal is leading the charge in opposition to the proposal. 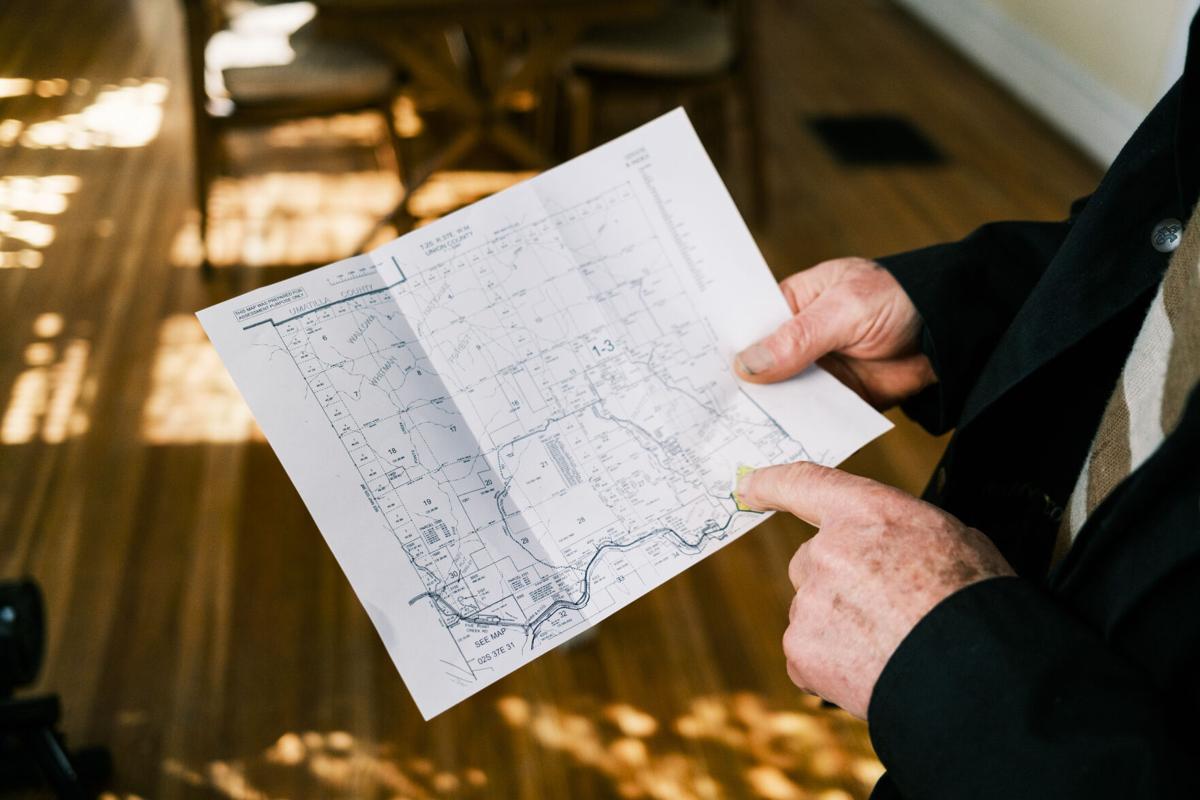 David Moyal points out the location of the proposed Ponderosa Quarry Project on a map Tuesday, March 2, 2021. 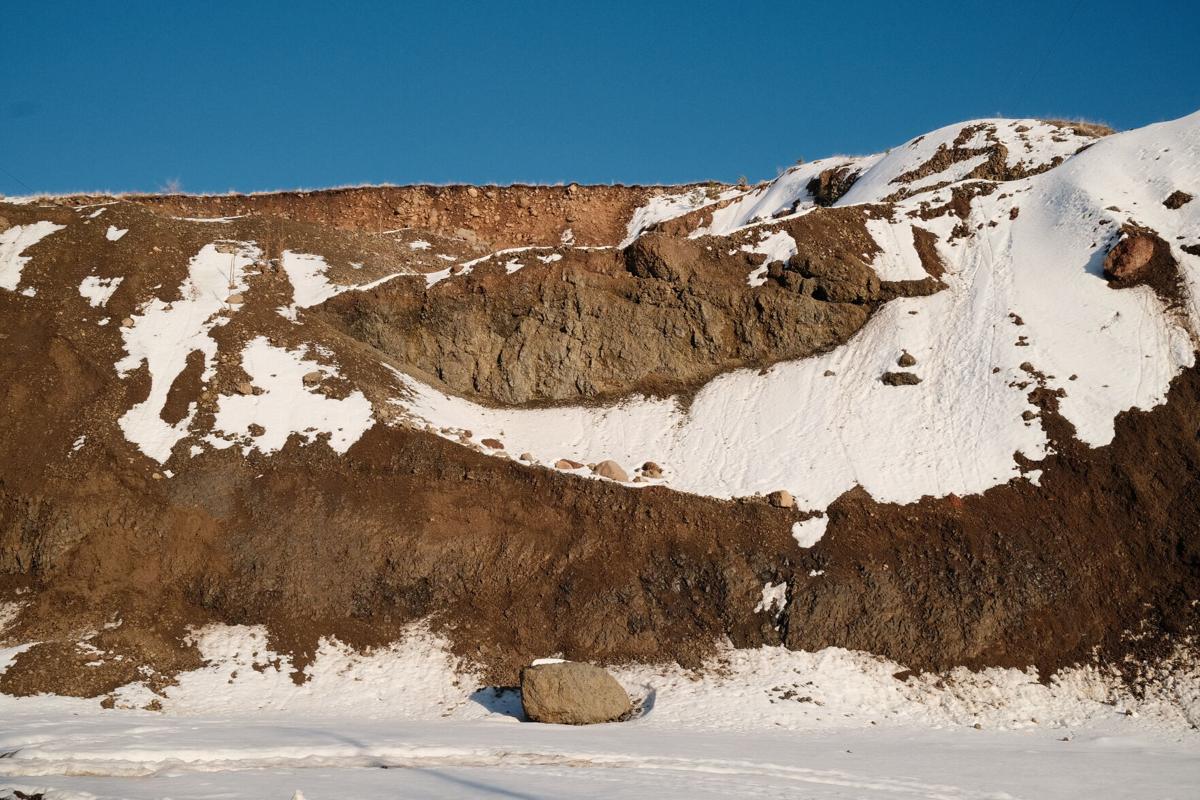 Snow rests on the mountainside Tuesday, March 2, 2021, near the site of a proposed 250-acre quarry less than a mile from Perry off Interstate 84 in Union County.

A train passes Tuesday in early March off Interstate 84 near Perry, the site of a proposed 250-acre quarry that would ship 2,000 tons of material per day. The Union County Planning Commission voted against the proposal March 22, and the property owner withdrew the application ahead of the county board of commissioners’ vote Wednesday, April 6.

UNION COUNTY — Locals are lining up against a proposal for a massive rock quarry near Perry and La Grande.

David Moyal of La Grande is leading the charge to block the 250-plus-acre Ponderosa Quarry Project that would operate on more than 4,700 acres where Robbs Hill Road meets Interstate 84 near the community of Perry. Locals know Robbs Hill Road as a place to pick huckleberries, Moyal said, ride bikes or just go for a beautiful drive. The quarry would end that, he said, and the effect on Perry would be drastic.

“With the dust, and noise and the pollution — it’s unenviable,” he said.

But the downside as Moyal painted it does not stop at Perry.

Interstate 84 from Pendleton to the Grande Ronde Valley is special, he said, and designated as a scenic corridor. Plunking this large mining site with a crushing facility and railroad access near the interstate and in full view of the entrance to the Grande Ronde Valley, he said, “is just an objectionable idea” with “absolutely no justification for doing it beyond profit.”

James A. Smejkal of Banks submitted the application to the county on Sept. 18, 2020, then provided a pair of updates before the end of the year. According to the site plan application, the project would create the quarry approximately 2.5 miles west of La Grande and about a mile from Perry and involve rock crushing, screening, washing and stockpiling. The project would build a railroad spur to ship aggregate across the western United States. The Union County Planning Commission is holding a public hearing Monday, March 8, starting at 7 p.m. via teleconference to consider approving the application.

Moyal said he plans on calling in and will speak against the project, which he did back in 2018 the first time the planning commission considered the plan. The commission at that time deemed the application to be incomplete.

This time, as Moyal put it, the application is more robust — stacking up to about 400 pages. He said he was not aware the project had come back for reconsideration until Feb. 1 when he received a notice that the planning commission would consider the new application plan for the quarry in seven days. But the county postponed the meeting until March 8. That gave Moyal a month to prepare.

“So I thought, if I’m going to do anything with that, I’m going to have to do grassroots organizing,” he said.

Moyal drafted flyers to raise awareness about the meeting and express concerns with the quarry and handed them out in Perry and to businesses in La Grande. He created a Facebook page, Stop the Robbs Hill Road Quarry, which as of Wednesday, March 3, had 52 followers. And Moyal started an online petition against the quarry on change.org. More than 530 people have signed the document so far.

Moyal said if the county gives the approval, the problems with the quarry will be here in the Grand Ronde Valley for a long time.

Depending on what part of the application you read, he said, the lifespan of the quarry is 89 years or 137 years and would extract 300 million tons of rock. Per the application, one gallon of diesel via rail can transport 1 ton of aggregate 440 miles, and the plan is to ship 2,000 tons a day every day of the year to Western states. Doing the math, he said, and being generous with doubling the distance, requires almost 1.47 million gallons of diesel a year.

That makes the quarry, he said, “a massive polluting project.”

Raymond Myer of La Grande also is opposed to the project. He said as a child he played in the seasonal creeks that run through where the quarry would operate. He questioned the reasons behind the proposal.

“First off, there’s no need for it,” he said. “Second, environmentally it’s wrong. And third, it would be an eyesore.”

Union County and the surrounding areas have several rock quarries, he said, and Harney Rock & Paving Co. in North Powder already provides ballast to Union Pacific Railroad for the Pacific Northwest and other rock products to the local community.

The outdoors and fish and wildlife matter to residents here, Myer said. The site for the quarry helps support several hundred elk, and he said erosion from a quarry would raise concerns for endangered salmon spawn in the Grande Ronde River, which is adjacent to and downhill from the site.

Dust pollution from the site would blow down the canyon into La Grande, and the place would be noisy. And like Moyal, he said a quarry operation of this scope could knock the “scenic” right out of the scenic corridor.

“Is it still (scenic)? If so, how can this rock quarry be turned into the scar on the hillside next to I-84?” he said.

Myer said he sees another problem with the location.

Robbs Hill Road is a narrow, poorly maintained, steep road with a creek running next to it down to the Grande Ronde River, he said, and homeowners and recreational users depend on the road for access to Perry when Interstate 84 is closed. A big operation right off the road will not make that situation better.

Dan Steele said he lives in Perry and also does not want the quarry to go in. A retired railroad worker, he said he spent a long time around the Harney rock pit, and big quarries mean heavy equipment and inevitable breakdowns that lead to diesel spills and more. All of those fluids, he said, would end up in the Grande Ronde River.

“There’s just a lot of things wrong with the whole thing,” he said, including possible depreciation of property values. Steele also joined the chorus in questioning the placement of the project.

The Harney pit for example, he said, is far from any scenic area and homes. Steele said his home, where his grandchildren often visit, would be half a mile from the Robbs Hill Road pit.

“There’s got to be a million places more appropriate for such a quarry,” Steele said.

Preparing for the longer fight

Moyal said he has put together about 35 pages of specific objections for the county planning commission to consider at the Monday meeting. The real purpose of gathering all the details he can, he said, is to be ready with an appeal to the Oregon Land Use Board of Appeals, the tribunal that serves as the arbiter of local land use decisions in the state.

To even have a chance to argue before LUBA, Moyal said, “You really have to cross the t’s and dots the i’s.”

The LUBA application would place 4,550 acres into a conservation easement with the Mule Deer Foundation to protect habitat for mule deer and elk. According to the application, the easement would allow cattle grazing and timber management.

Moyal called the easement a way to make the quarry more palatable for the county planning commission.

The meeting Monday will be a public hearing, with the applicant getting to present arguments for the quarry, and then public comments for and against. Often, planning commissions limit the time for public comment. Moyal said the last time he spoke against this, he got three minutes.

But he said he is asking the commission to allow him more time to go through the numerous objections he has collected against the project. Whether the commission chair will give him enough time, he said, he does not know.

If the planning commission gives its stamp of approval to the project, Moyal said he is ready to step up his opposition with more community organizing and even fundraising to pay for a lawyer to take up the fight.

How to participate in the public hearing

The Union County Planning Commission is holding a public hearing Monday, March 8, at 7 p.m. via teleconference to consider approving the application for a large quarry at the juncture of Robbs Hill Road and Interstate 84 near Perry. To listen to or participate in the hearing, call 253-215-8782 or 669-900-6833 and enter meeting identification No. 995 6180 8582.