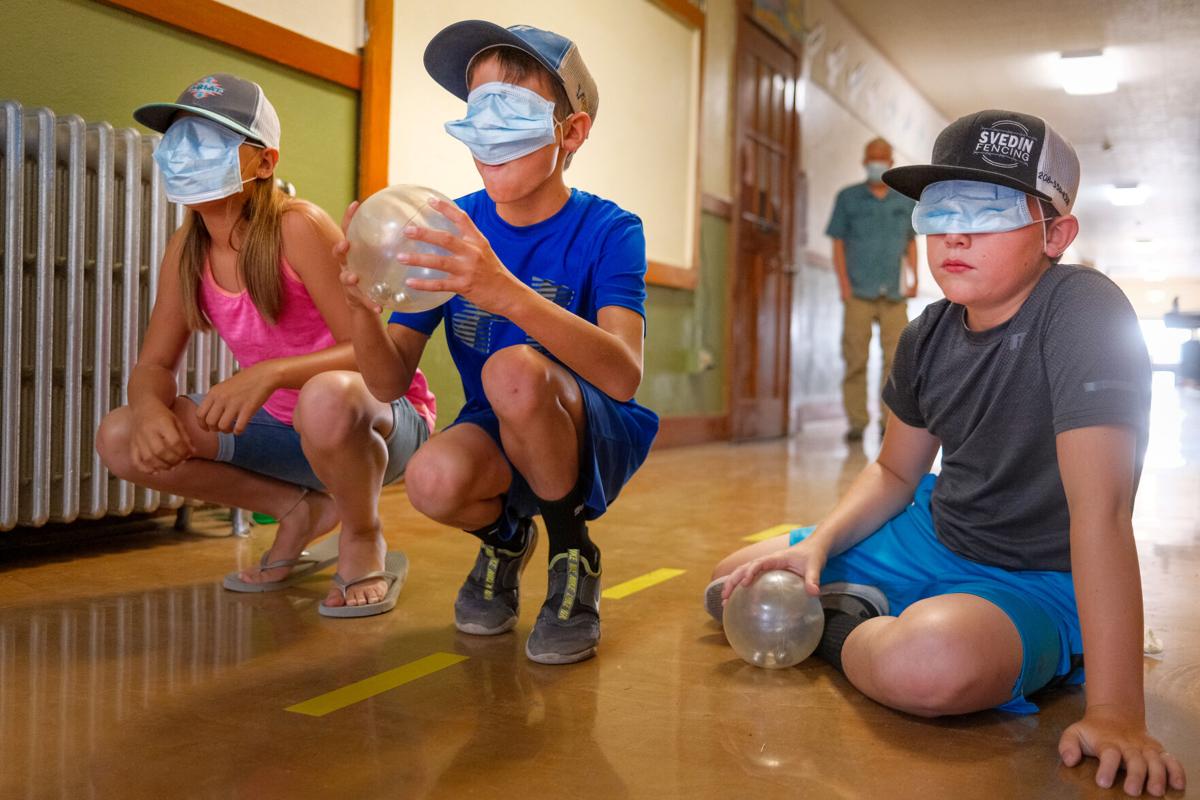 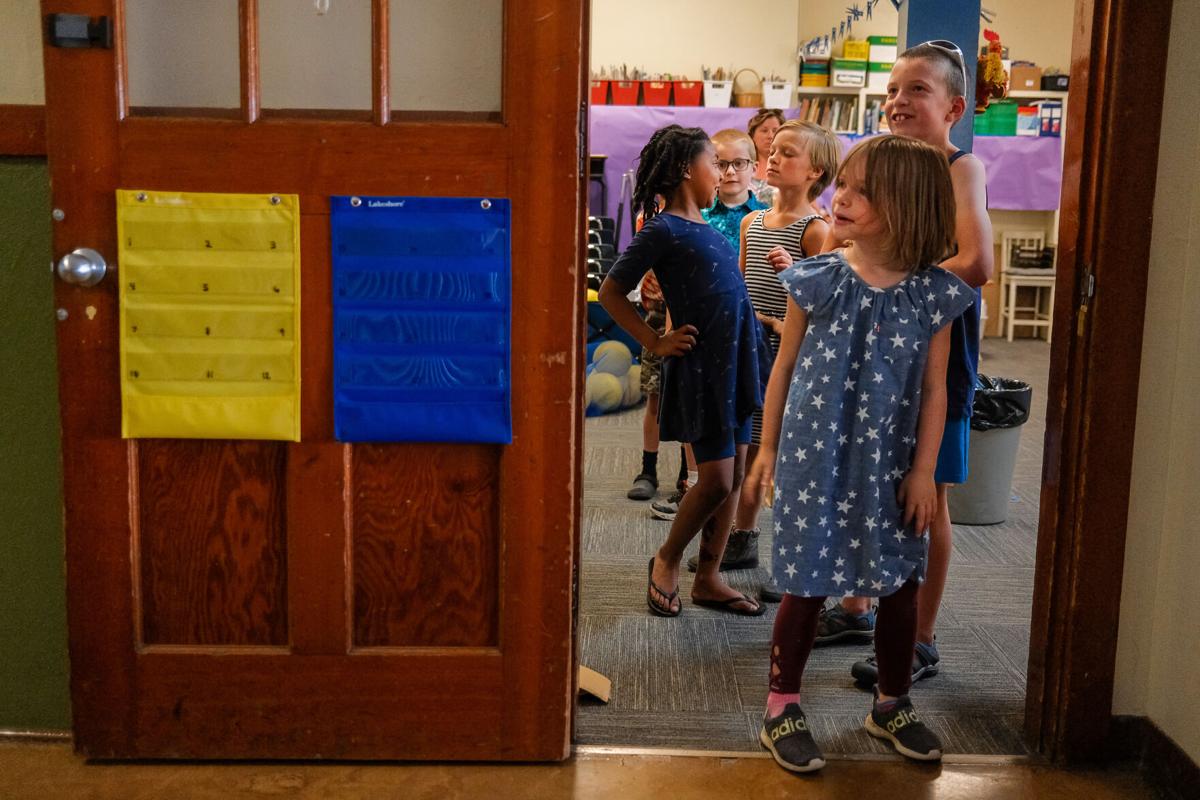 Monroe Farley looks out into the hallway, leading the line to recess on Tuesday, June 29, 2021. Cove Elementary School became the Cove Summer Enrichment Program, allowing students to play games, learn and socialize over the summer. 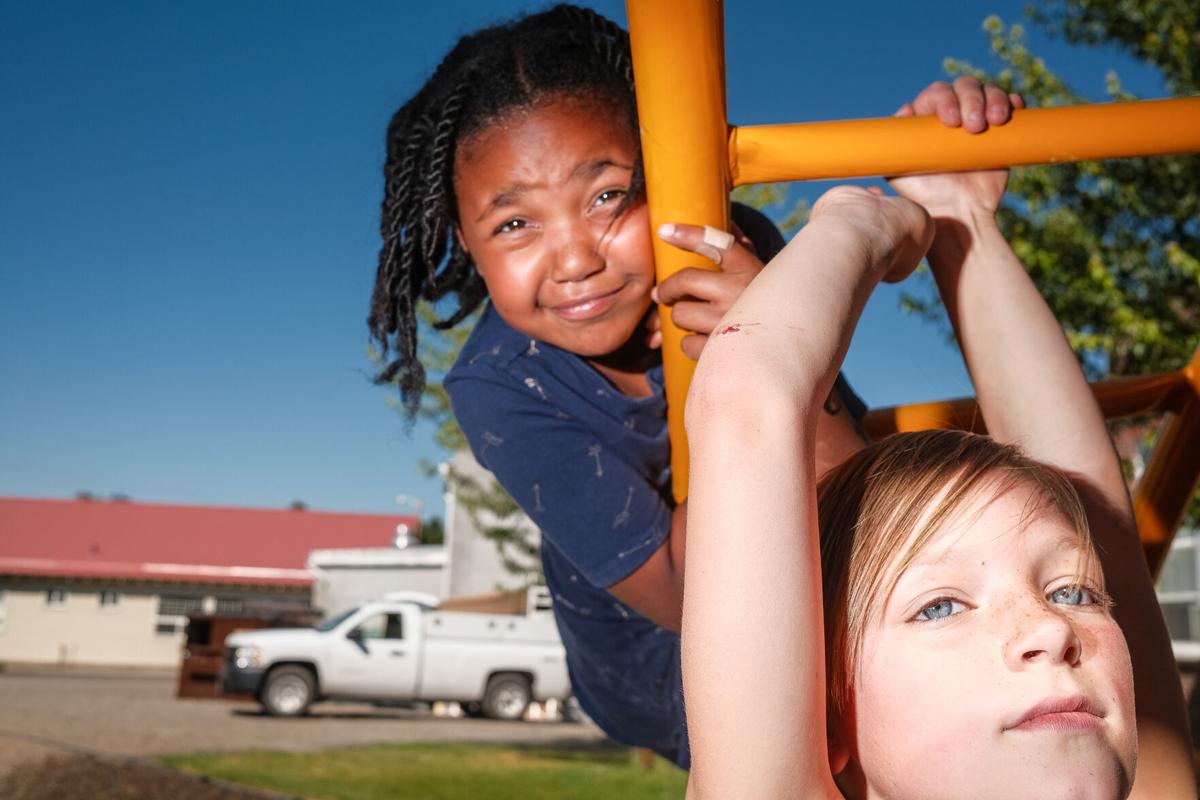 Raynne Wilson and Kayleesi Farley play on monkey bars during recess from the Summer Enrichment Program at Cove Elementary School on Tuesday, June 29, 2021. 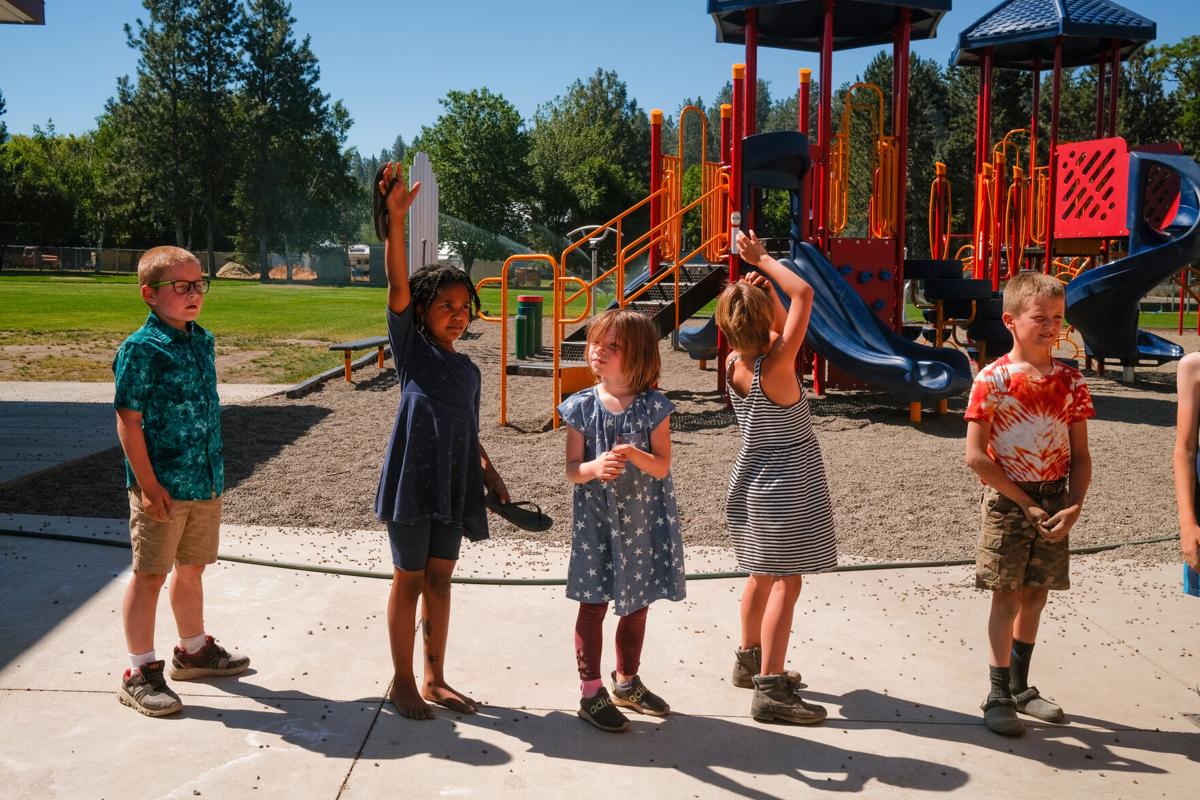 Monroe Farley looks out into the hallway, leading the line to recess on Tuesday, June 29, 2021. Cove Elementary School became the Cove Summer Enrichment Program, allowing students to play games, learn and socialize over the summer.

Raynne Wilson and Kayleesi Farley play on monkey bars during recess from the Summer Enrichment Program at Cove Elementary School on Tuesday, June 29, 2021.

COVE — Bubbles, bells and ghosts are helping the summer of 2021 become one of excitement, laughter and insight for several dozen Cove children.

The children are attending daily sessions of Cove Elementary’s new Summer Enrichment Program, which is helping students discover that learning can be as fun as enjoying an ice cream sundae in the shade during a hot summer day.

Tricia Tucker, the head instructor for the Summer Enrichment Program for third through fifth graders, said she likes the summer camp atmosphere of the program.

“It gives me an opportunity to get to know the kids outside of a formal setting,” said Tucker, who has taught fifth grade in the Cove School District for the past four years and will teach eighth grade this fall.

The free program, open to all Cove Elementary School students, started in June with its 10-day Young Olympians unit, where children learned about international games — including kabaddi, which is popular in India — and the upcoming Summer Olympics and Paralympics in Tokyo.

Students also learned how to create games. One game developed by Tucker’s students tests their bubble directing ability. Students strive to see who can blow a group of soap bubbles to their classroom’s west wall the fastest. Keeping the bubbles together while moving proved to be quite a challenge.

Games Tucker taught her students included goalball, one to be played in the Paralympics by the visually impaired. Goalball is like soccer only it is played with tiny balls that have bells that jingle. Wearing blindfolds, Tucker’s students tried to push a jingling ball past fellow students or stop them from rolling past them.

“They said they could hear so many more things than they could before,” said Tucker, who is being assisted by Carolyn Stewart, an instructional aide in the Cove School District.

The Summer Enrichment Program is now in its 10-day Fall Into Fun unit. Children are learning, through art projects and games, about autumn-related subjects, such as the migration and hibernation of animals, and popular fall fruits.

The final unit, which starts in late July, is Leopards Give Back, a name reflecting Cove High School’s mascot. Students will be taught about public service during that unit. Tucker will have her students choose community projects to work on. Lacey Baird, the head instructor for the students in kindergarten through second grade the past school year, will select service projects for her students with the help of her assistant, Brittany Hersom, an instructional aide in the Cove School District.

A game Baird is having her students continue to play during all units of the Summer Enrichment Program is Ghosts in the Graveyard.

“It is their favorite,” she said.

The game calls for some children to lay motionless while pretending they are dead. Students then come up and try to get them to move or giggle by singing songs, telling jokes and dancing. The children pretending to be dead in most cases can’t resist giggling, but there are those who are able to keep straight faces.

“Some are very good at staying stoic,” Hersom said.

Baird said her students are getting better at performing as teams on projects as the summer progresses.

“They are getting good at working together,” she said.

The Summer Enrichment Program, funded by a state grant and conducted at Cove Elementary School, is a pilot for a model of an after-school program the school district will have for elementary school students this fall.

“It has children thinking creatively. This is truly an enrichment program, not a remedial program,” he said.

Program sessions run for three hours each morning, Monday through Thursday. For some children the three hours fly by too quickly.

“At the end of some days I’ve had children say, ‘Why can’t we stay longer?’” Tucker said.