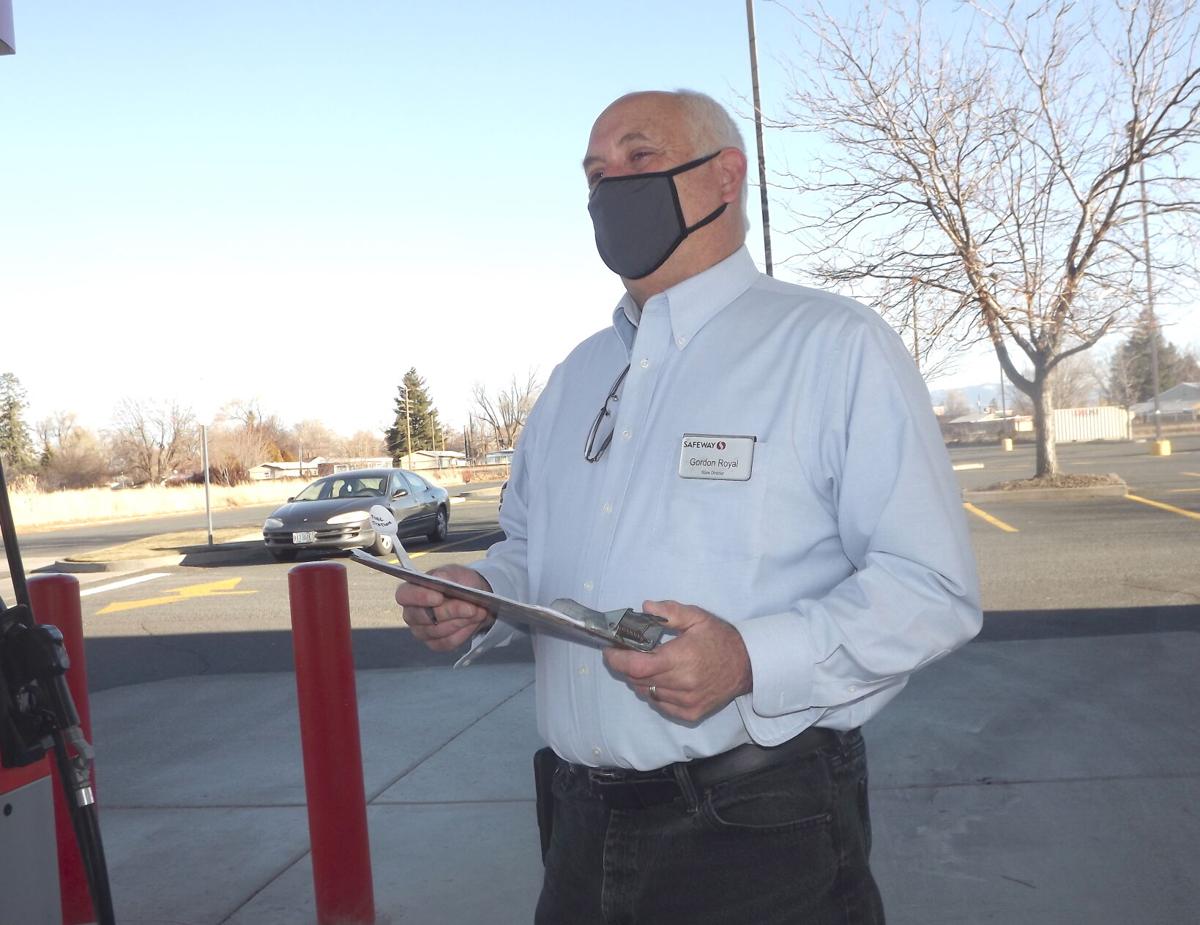 Gordon Royal, manager of La Grande’s Safeway since 1996, talks with employees Saturday, Dec. 5, 2020, at the store’s fuel station. Royal is retiring. His last day at Safeway will be Saturday, Dec. 12. 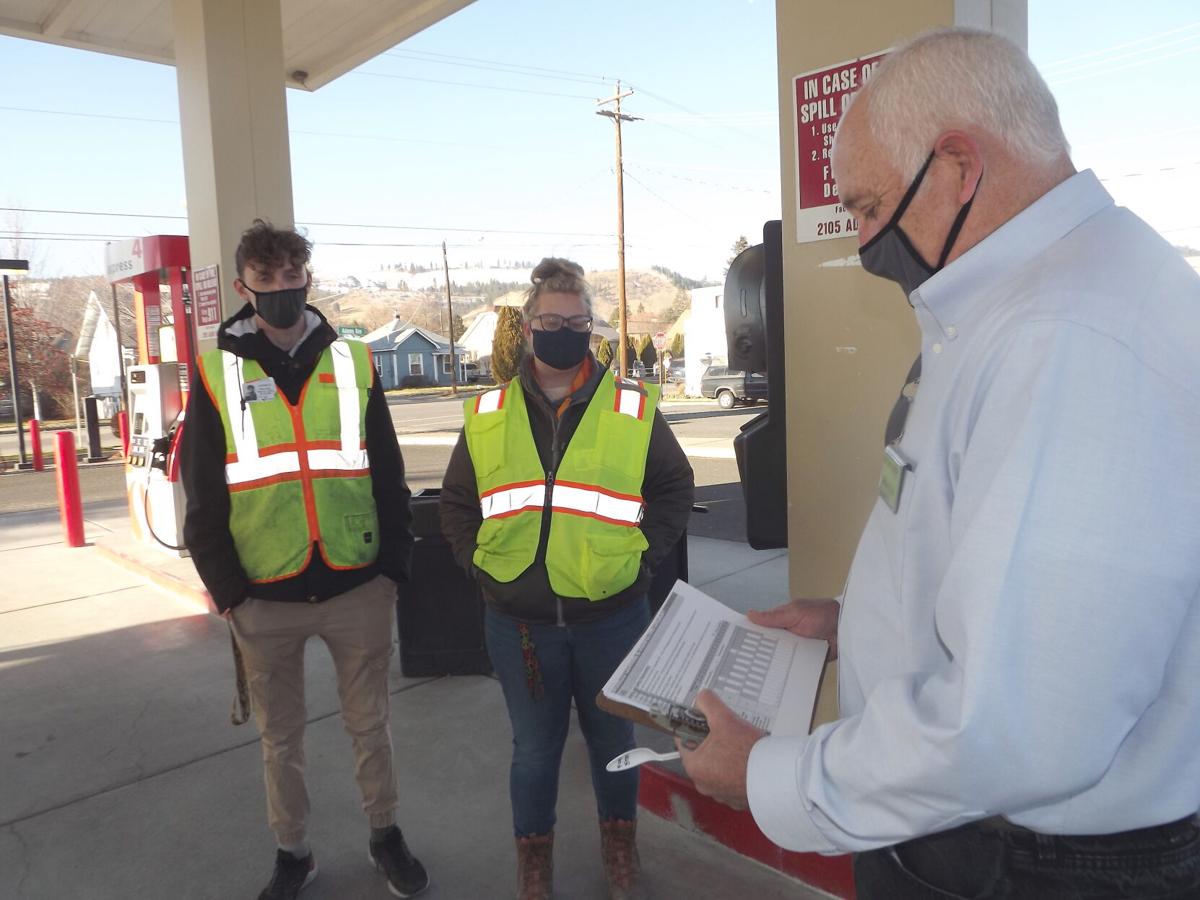 Gordon Royal, manager of the La Grande Safeway, talks with Matthew McCormick, left, and Madison Postles at the store’s fuel station on Dec. 5, 2020. McCormick and Postles are fuel station attendants. Royal is retiring Saturday, Dec. 12, after working 40 years for Safeway. 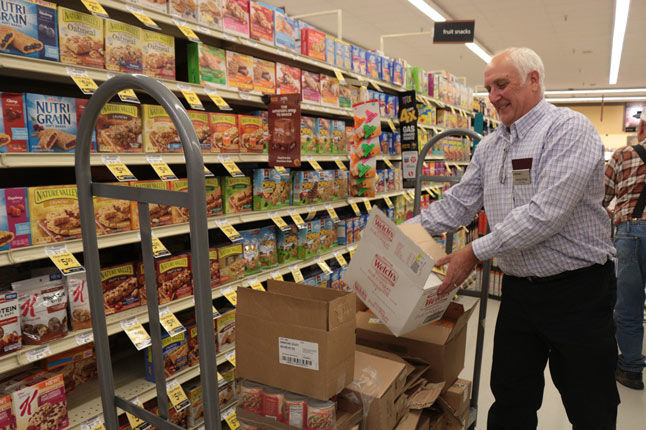 La Grande Safeway manager Gordon Royal stocks shelves Aug. 10, 2017, as the store prepared for the total solar eclipse a week later. Royal is wrapping up a 40-year career with Safeway when he retires Saturday, Dec. 12, 2020.

Gordon Royal, manager of La Grande’s Safeway since 1996, talks with employees Saturday, Dec. 5, 2020, at the store’s fuel station. Royal is retiring. His last day at Safeway will be Saturday, Dec. 12.

Gordon Royal, manager of the La Grande Safeway, talks with Matthew McCormick, left, and Madison Postles at the store’s fuel station on Dec. 5, 2020. McCormick and Postles are fuel station attendants. Royal is retiring Saturday, Dec. 12, after working 40 years for Safeway.

La Grande Safeway manager Gordon Royal stocks shelves Aug. 10, 2017, as the store prepared for the total solar eclipse a week later. Royal is wrapping up a 40-year career with Safeway when he retires Saturday, Dec. 12, 2020.

LA GRANDE — Nineteen years ago the anticipation level of local shoppers was soaring, and so was the anxiety level of La Grande Safeway Manager Gordon Royal.

The date was Friday, Dec. 7, 2001, and the grand opening of the new Safeway at 2111 Adams Ave. was less than a day away. Customers had reason to be excited. The store was more spacious than the old Safeway at Fourth Street and Adams Avenue and had new features, including a fuel station, a Starbucks and an expansive deli.

But delivery trucks were running late because of bad weather, putting the opening in a precarious position.

“I was worried we would not have enough product,” Royal said.

Finally at 9 p.m., nine hours before the grand opening, the trucks arrived. Royal’s sense of relief was short-lived. The next morning many people gathered outside the store awaiting the 6 a.m. opening and the chance to receive free Safeway hats. There was just one problem.

“We had a blizzard, a terrible storm,” Royal said.

The 6 a.m. opening could not come soon enough for the Safeway manager as he watched people shivering in line.

Everyone survived the blizzard and the opening went well. High-ranking Safeway officials from Portland, however, who came to La Grande for the festivities could not leave until the next day because the blizzard made driving conditions so treacherous.

Fortunately, the storm was not a bad omen. The new Safeway thrived under Royal’s guidance.

Now, Royal’s career is winding down. He is set to retire Saturday, Dec. 12, ending a a 40-year run with Safeway, the last 24 as the manager of the La Grande store. Amber Krantz, the manager of Baker City’s Safeway for the past seven years, is his successor. Krantz worked under Royal for five years as his assistant. She said she has enormous respect for him.

“He is just a great person,” Krantz said.

She noted it is unusual for someone to have worked as the manager of one Safeway store as long as Royal has. This and his commitment to public service allowed him to develop deep roots in the Grande Ronde Valley.

“He is a huge part of the community,” Krantz said.

Royal’s contributions, which include a stint as president of the La Grande Optimist Club, have earned him recognition. This was evident about six years ago when the Union County Fair named Royal the grand marshal of its parade.

Royal said he sought to remain put because of his family. He explained he grew up in Pendleton and liked the stability of living in one town as a youth. Royal said because he so enjoyed this he wanted to give his children, Corey and Jessica, the same opportunity.

“I never wanted to leave La Grande,” he said.

Royal began working for Safeway in 1981 at the Pendleton store as the manager of the camera department, which back then sold microwave ovens and other electronics. He left to take a position with Safeway’s Redmond store. His first stint at the La Grande Safeway was in 1989, when he worked under manager Nick Ruberti and later Bill McLeod.

Royal next entered Safeway’s management training program and then served as an assistant manager at Safeway stores in Enterprise, Madras, The Dalles and Pendleton before becoming the manager of La Grande’s Safeway in September 1996.

A lot has changed in the grocery store business since Royal began his career, but a number of things have not. He said regardless of the circumstances the two busiest days of the year are always the day before Christmas and Thanksgiving. The busiest day of the week is usually Friday. Royal said business on Friday has gotten particularly brisk since Safeway stores started $5 Friday sales.

He recalled checkers years ago had to punch in codes for specific vegetable and fruit items. Checkers had to memorize about 100 codes, one for each fruit and vegetable product.

“They couldn’t be hired until they memorized those codes,” he said, noting everyone who applied proved capable of doing this.

Royal has had multiple long-term employees during his tenure at Safeway and credited this to how the company treats its employees.

Those who worked many years under Royal include Judy Johnston, who retired several years ago after 38 years at Safeway and at least 15 under Royal.

“He was a great boss. He is fair with his employees. He is No. 1 in my book,” Johnston said.

She said Royal maintained a calm and pleasant demeanor regardless of how stressful the situation.

“I never saw him get mad at anyone. Even though he has 10,000 things going on at once, he is always pleasant,” Johnston said.

Dave Girrard, who was named the manager of the La Grande Safeway’s fuel station earlier this year, also said Royal, who hired him, is great to work for. Girrard, like Johnston, said Royal created an upbeat working environment.

“He has a bright personality, which rubs off on people,” Girrard said.

Krantz credited Royal with being a classic leader by example.

“He won’t ask you to do anything he wouldn’t do himself,” she said.

Krantz also said she appreciates the respect Royal shows for his employees.

“He treats everyone the way you would want to be treated,” she said.

Royal and his wife, Gaylene, who will retire from her position with Bi-Mart in March 2021, plan to stay in La Grande and are looking forward to spending more time with their son and daughter, who live in the Portland area.

Gordon Royal said he and Gaylene will be forever thankful for the opportunities the people of the Grande Ronde Valley have provided them, especially as they raised their family.

“We owe so much to this community,” he said.