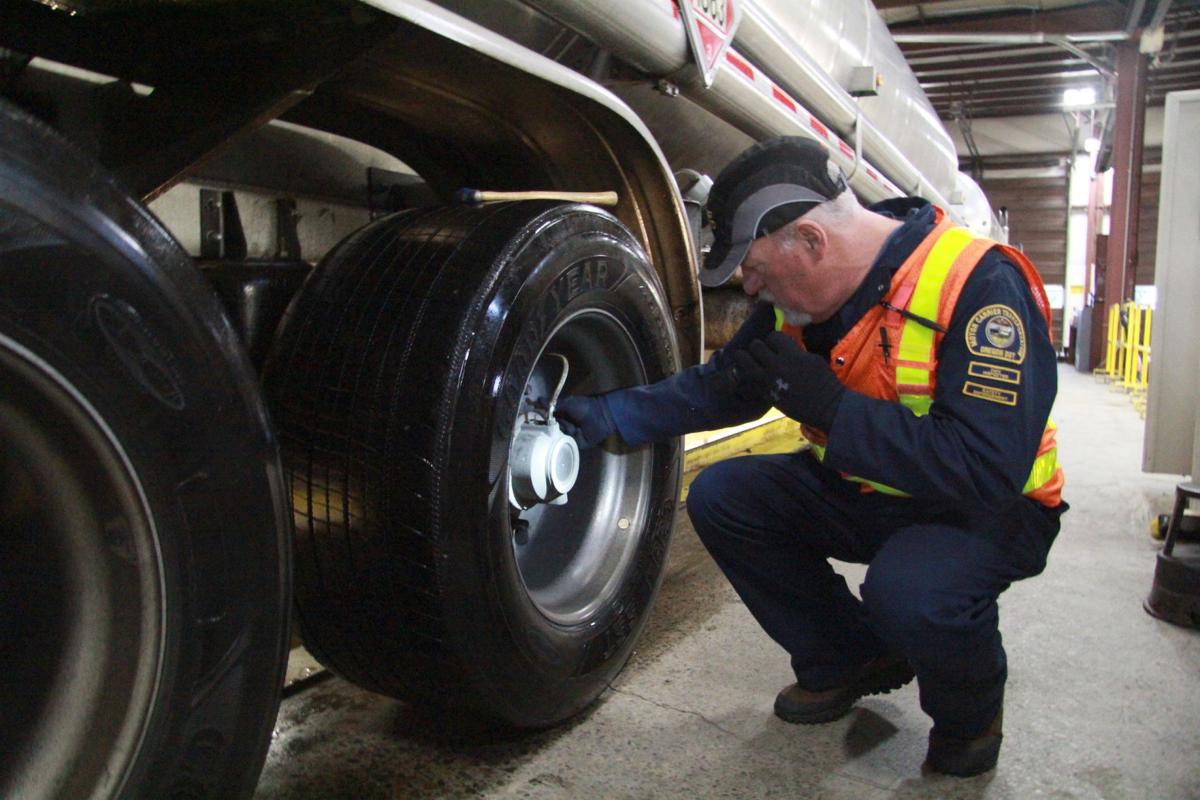 Brakes and lighting are the two most common issues compliance specialists with the Oregon Department of Transportation find in routine inspections. 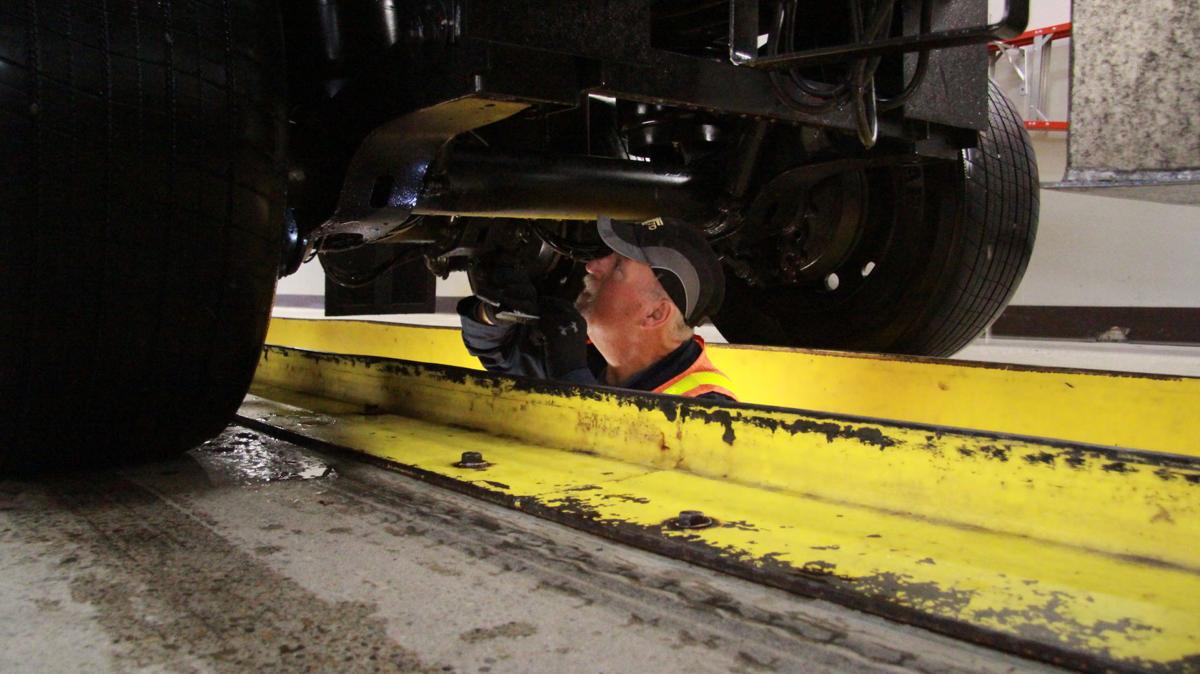 Don McCloskey inspects the brake systems from underneath a trailer hauling fuel during a routine inspection at the Woodburn port of entry. 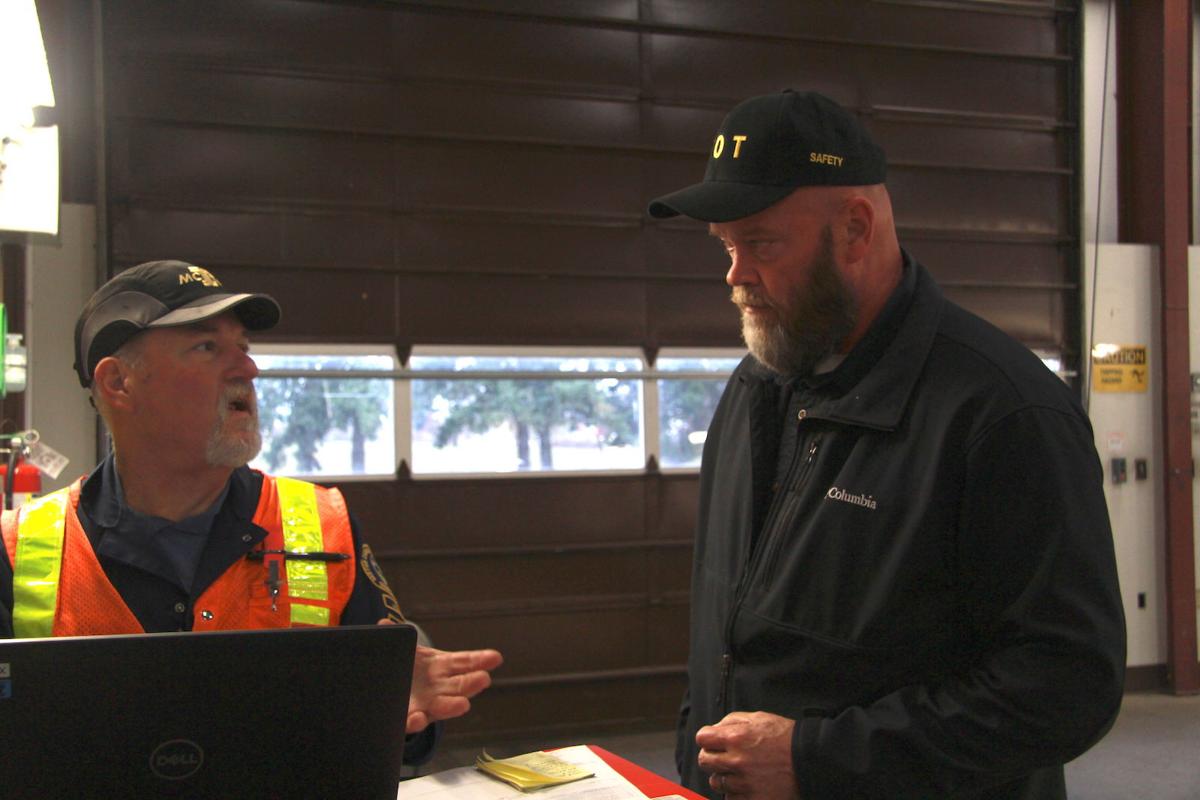 Don McCloskey (left), motor carrier compliance specialist with the Oregon Department of Transportation, and Jess Brown, Central Safety Unit manager. discuss an issue with a driver’s registration during a routine inspection at the Woodburn port of entry.

Editor’s note: This is part two of a two-part story. The first part will ran in Monday's Observer.

The Oregon Department of Transportation raised the bar for safety in adopting a new action plan in 2016. The agency envisions a future with no deaths from traffic accidents on Oregon’s roads.

While crashes involving commercial trucks only account for a small portion of the state’s annual death toll — only 58 of the 502 fatalities in 2018 involved a truck — ODOT’s Motor Carrier Division takes seriously the inspection of trucks as a means of prevention.

The number of vehicle miles traveled by trucks in Oregon has increased by 181 million miles the past decade. With an increasing number of trucks on the road, state truck inspectors have become smarter about how they carry out their work, using data to target repeat offenders and keep both trucks and drivers with chronic issues off the road.

In 2018, state specialists completed 18,549 inspections and issued more than 3,500 citations and warnings. Through November, there have been more than 16,500 inspections and 2,900 warnings or citations issued to drivers or trucking companies this year. A majority of those inspections are done at ports of entry at Woodburn, Klamath Falls, Huntington, Ashland and Cascade Locks.

Hundreds of thousands of cars pass the Woodburn truck scales on Interstate 5. It’s here inspectors, called compliance specialists, complete random checks on a variety of criteria from the physical equipment to a driver’s documentation. The process starts with the 75 weighmasters across the state at roadside scales such as Woodburn.

Weighmasters use an automated system that electronically collects data from each truck that passes under a detector located about a mile up the freeway.

Tom Avila is one of the weighmasters at the Woodburn scales. After 14 years, he’s adept at reading dozens of data points on several trucks at once as they file past his little hut at the weigh station. He sits in front two computer monitors displaying details he needs to know about each truck.

In a matter of seconds, Avila reads who is driving, where they’re licensed, how long they’ve been driving, whether their registration is valid, how much weight each truck axle is carrying and if the weight matches their permit. The Woodburn scales are also piloting a new technology that can tell Avila whether a tire is flat or if there’s a problem with an axle so he can alert the driver to pull over.

The Woodburn scales see approximately 6,000 - 7,000 trucks a day. Between pre-clearance and simply not having enough time to weigh every truck, that number is a small portion of the total trucks rolling by.

Avila works with inspectors such as Don McCloskey, who pull trucks out of line either by certain type — such as focusing on those carrying hazardous materials — or using a formula.

Instead of randomly checking trucks and stopping drivers who have no violations, inspectors can target trucks most likely to have an issue.

“We want to take those trucks and drivers who are in bad shape off the road,” Brown said.

McCloskey will ask Avila to flip a switch that notifies the driver they’re going to be inspected and to pull around to a large truck barn located a hundred feet west of the weigh station.

According to Brown, compliance specialists are expected to complete between eight and ten rigorous inspections a day. That means they give each truck a 360-degree sweep, crawling down into a pit to get underneath, shining flashlights up into critical systems like brakes and load securement, checking the driver’s service and medical records and ensuring registration is in order.

An inspection can take from 30 minutes to an hour depending on what they find and how long it takes to discuss with the driver what needs to be fixed. According to ODOT data, the most common issues inspectors catch are improper lights and brake problems. Those account for nearly half the violations cited by inspectors.

Some violations are considered critical enough to put a truck or driver temporarily out of service, meaning the problem either has to be fixed on the spot, the truck towed or escorted to a mechanic. Those include any mechanical or load tie-downs problems determined likely to cause an accident or breakdown. Those account for 23% of all violations issued by the Motor Carrier Division, slightly higher than the national average of 20%.

Driver violations severe enough to force them off the road, such as driving over the allotted 11-hours in a 24-hour period or failing to maintain a commercial driver’s license, account for 14% of all out-of-service violations.

“Motor Carrier has had a very strong performance for a long time, and we take accidents incredibly serious,” Brown said. “It’s one of the things that drew me to this job is the ability to prevent people from getting hurt.”

But an increasing number of trucks and same number of inspectors each year means the Motor Carrier Division heavily relies on technology to make sure they’re catching those factors that could cause a crash.

According to Brown, data from ODOT’s Crash Analysis Reporting Unit shows that in many cases, driver behavior — speeding, following to close, improper lane change, failing to yield, inattention — accounts for a majority of the truck at-fault crashes throughout that state.

The division also relies heavily on the Oregon State Police to catch problems. Many state troopers are trained to inspect trucks, often done on the side of a highway somewhere in Oregon.

Troopers also keep an eye out for impaired truck drivers. In 2016, the most recent year data is available, 90 drivers were caught under the influence of alcohol or drugs.

Inspections, however, don’t always result in citations, according to Brown. In fact, compliance specialists are inclined to use inspections as teachable moments so drivers learn what they need to fix or how to prevent issues from recurring.

“I encourage all of my folks when they’re doing inspections, whether it’s a driver from Oregon, Nebraska, Maine or California, to give them their business card so they contact them if they have questions,” Brown said. “The more informed everyone is out there the better.”