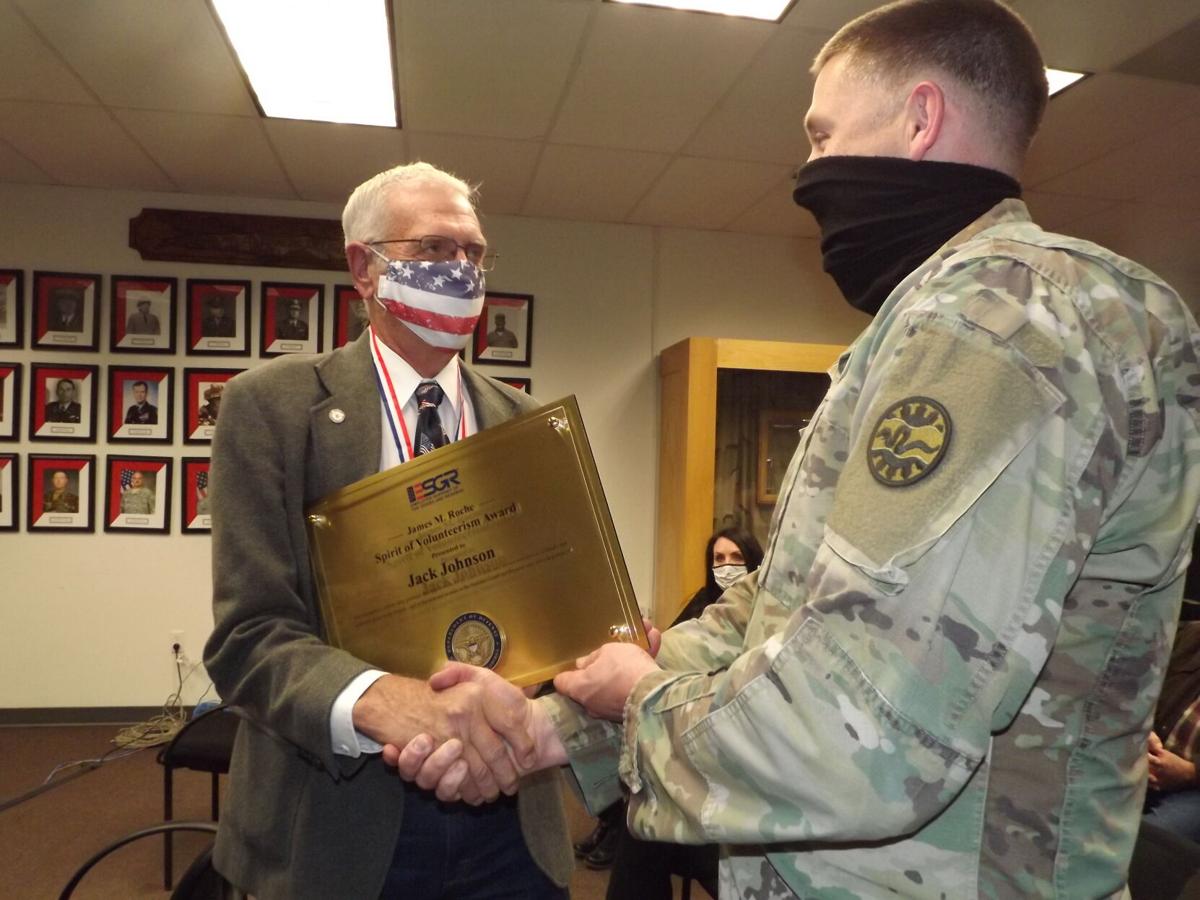 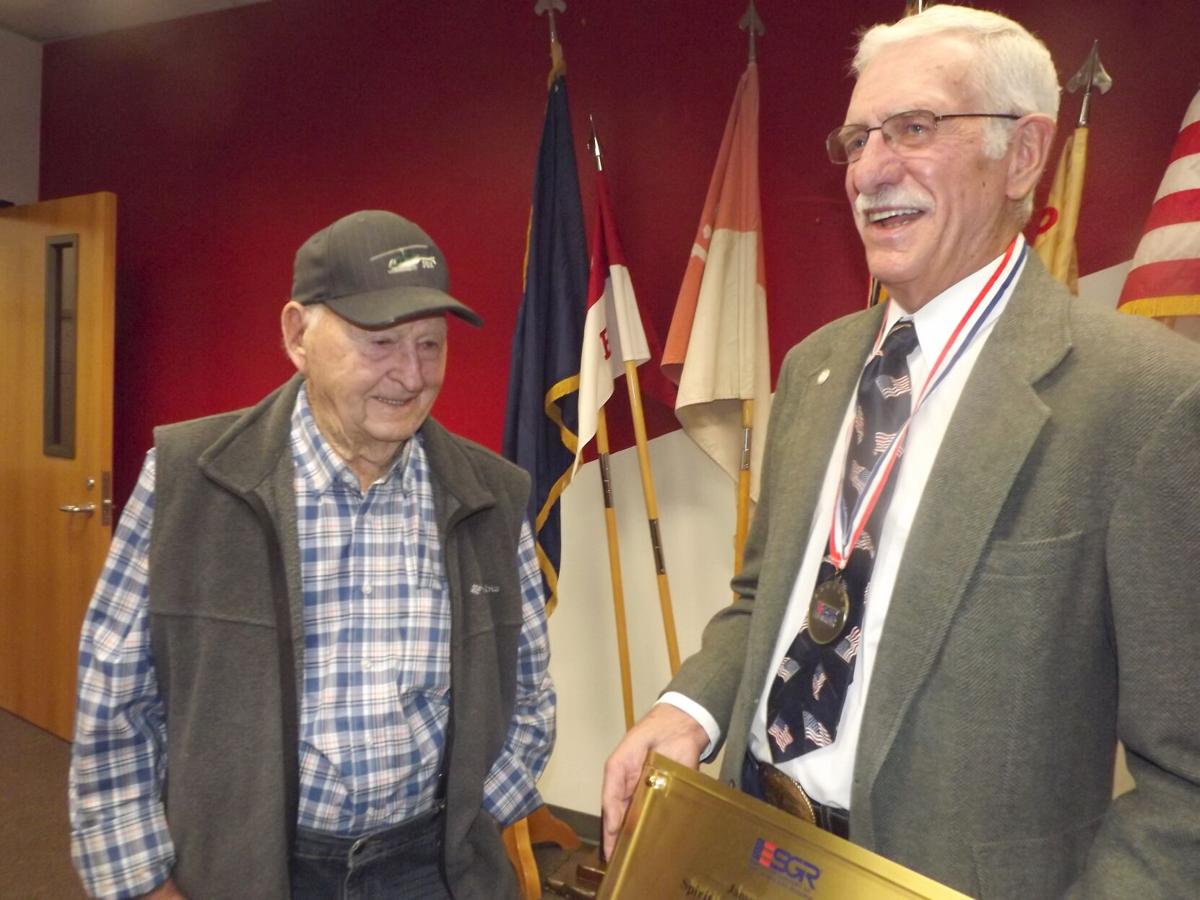 Jack Johnson, right, talks with his Cove neighbor Wally Rudd, a Navy veteran, after receiving the James M. Roche Spirit of Volunteerism Award for his service with the Employer Support of the National Guard and Reserve.

Jack Johnson, right, talks with his Cove neighbor Wally Rudd, a Navy veteran, after receiving the James M. Roche Spirit of Volunteerism Award for his service with the Employer Support of the National Guard and Reserve.

COVE — Jack Johnson of Cove is an avid local historian who has been lauded for his efforts to keep the past from being forgotten.

On Sunday, Nov. 15, Johnson was recognized not for his historical research but for his advocacy for soldiers with civilian careers.

Johnson, a retired National Guardsman, received the James M. Roche Spirit of Volunteerism Award. The honor salutes the more than three decades Johnson has worked as a volunteer for the Employer Support of the National Guard and Reserve.

The Roche award is the highest honor given for superior and sustained service to the ESGR. The ESGR is the lead U.S. Defense Department program promoting cooperation between civilian employers and their National Guard and Reserve employees.

Johnson, who retired from the National Guard 19 years ago, has been a ESGR volunteer for more than three decades. He was presented the Roche award at the Blue Mountain Conference Center during a ceremony that included virtual presentations by retired Maj. Gen. Dennis Klein, who is state chair of the Oregon ESGR, and Maj. Gen. Raymond Rees of Helix, a former commander of the Oregon National Guard’s La Grande-based 3rd Battalion, 116th Cavalry and a former director of the U.S. Army National Guard.

Klein said Johnson is deserving of the Roche award, and Rees credited him with doing “spectacular” work.

Johnson said he will never forget how he felt when told via phone he had won the award.

“I was stunned. I could not get my head around that possibility that I had won the Roche award,” the Cove resident recalled.

Johnson served in the Oregon National Guard for 45 years, 10 months and 16 days before retiring in 2001. He was its command chief warrant officer at the time of his retirement and the first person to ever hold this position.

Johnson has served as a ESGR volunteer at least since 1990. The veteran said he was inspired to volunteer for the ESGR because he earlier worked for a railroad company in Wasco. He remembers how difficult it was to get the release time he needed to attend National Guard training sessions because his job was essential for the railroad’s operations.

“It was tough,” Johnson said.

He was later Eastern Oregon University’s financial aid director and said EOU has an excellent working relationship with the National Guard.

The veteran has done much of his ESGR work for members of the 3rd Battalion, 116th Cavalry. Johnson has an understanding of its history like few others and nine years ago discovered documents that proved the 3-116th’s initial battalion was based in Union.

Maj. Jorge Deanda of the 3-116th said on Sunday that Johnson has an intuitive understanding of the issues members of the National Guard unit must deal with as they balance civilian careers with military service.

He noted that to help employers understand the challenges their employees in the National Guard face, he arranges for them to attend some of their training sessions each year.

“He is the point man for this,” Deanda said. “He directs everything.”

He also said Johnson is an excellent person for ironing out differences between employers and National Guardsmen because he has experienced the same challenges.

“He understands what soldiers are going through,” Deanda said.

Johnson has no plans to cut back on volunteering.

“Efforts by volunteers are important to make anything work,” he said.

“I was stunned. I could not get my head around that possibility that I had won the Roche award.”