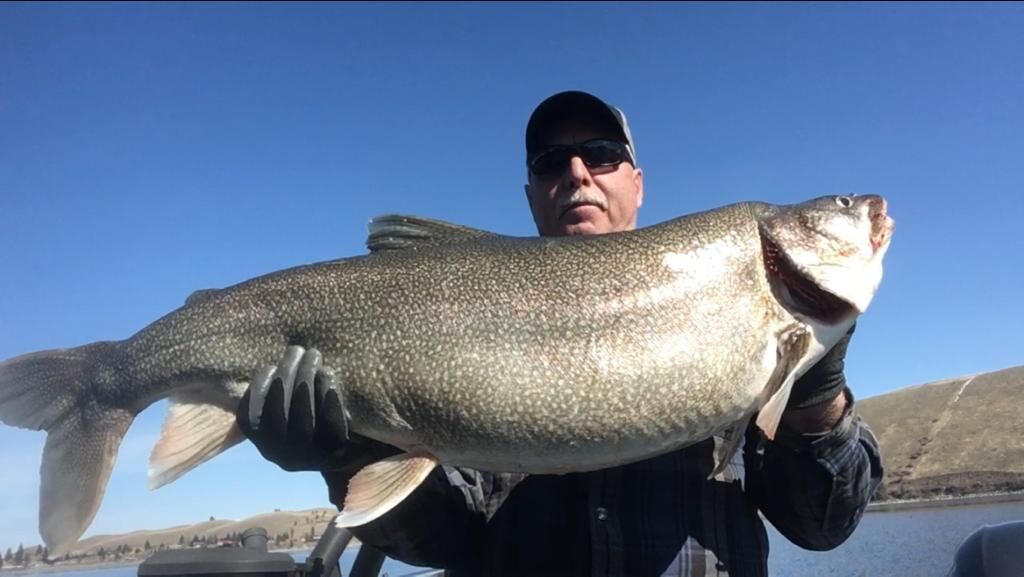 Mark Moncrief holds up a 35-1/2-pound mackinaw he caught recently at Wallowa Lake. Moncrief holds the record for the largest mackinaw caught at the lake, which was just a pound heavier than the one pulled in last month. 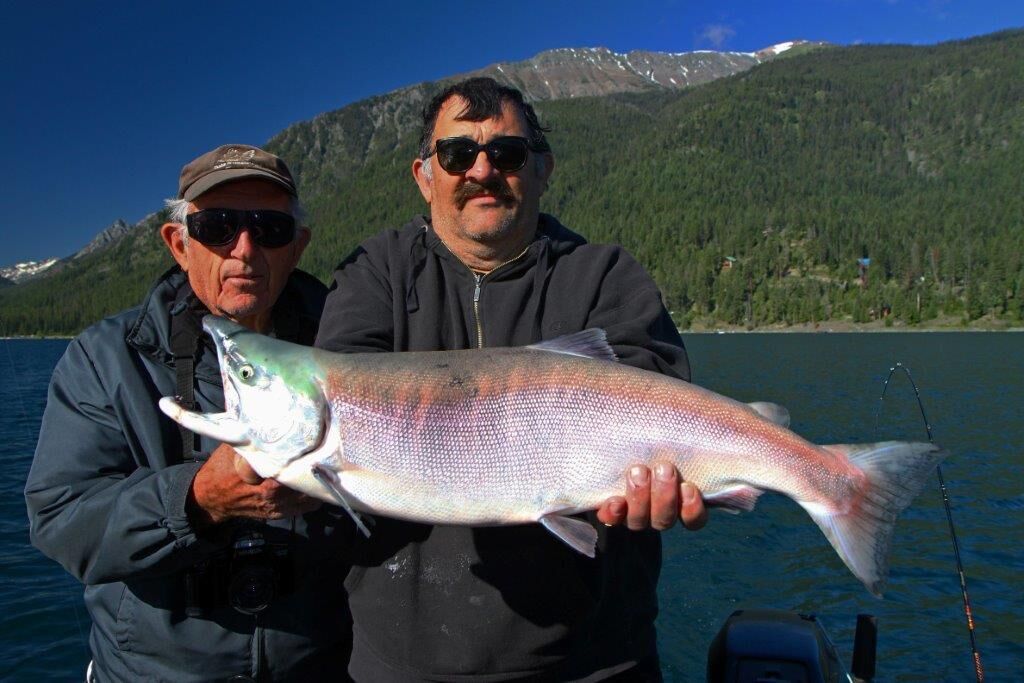 Two of Mark Moncrief’s clients hold up a 29-inch, 9-pound kokanee caught under Moncrief’s guidance about a decade ago at Wallowa Lake.

Mark Moncrief holds up a 35-1/2-pound mackinaw he caught recently at Wallowa Lake. Moncrief holds the record for the largest mackinaw caught at the lake, which was just a pound heavier than the one pulled in last month.

Two of Mark Moncrief’s clients hold up a 29-inch, 9-pound kokanee caught under Moncrief’s guidance about a decade ago at Wallowa Lake.

WALLOWA LAKE — A Wallowa County fisherman who holds the record for the largest mackinaw caught at Wallowa Lake recently hooked another whopper.

He also has had recent success pulling in kokanee, and said it appears this will be a good season for catching large kokanee at the lake.

It’s been a good start to the angling season for Mark Moncrief, a hunting and fishing guide who owns Tri-State Outfitters south of Enterprise.

“I do really well from usually about the first couple week or weeks in March on,” he said. “We’ve done good in February. It depends on the year. On an average by mid-March on we’re starting to do good and consistently catching. I do really good on the macks early like that. We have a really large average on our fish. Most macks, people are catching 5 to 12 pounders. Our average here is 15 to 18 (pounds).”

With the kokanee, Moncrief said there has been a cycle between smaller fish sizes but higher numbers, or larger numbers but smaller fish.

“Last year, I saw the cycle swing back to a bigger fish,” he said. “This year, this early in the year, I’m catching fish in excess of 20 inches already. They’ll grow an inch a month after March.”

Most good-sized kokanee, he said, are anything in excess of 12 inches, and he said 18 to 20 inches is getting into trophy-sized fish range.

Business has not slowed down for Moncrief despite the pandemic, especially once restrictions were lifted last year and he was able to get back on the water.

“When they opened the county back up I was just flooded,” he said. “I think it was the COVID. They were just bugging out — a lot of Washington (and) Idaho people (were here).”

Moncrief isn’t sure if this year will be as busy as 2020 was for him, but when the large kokanee start showing up at Wallowa Lake, more people make their way to the water to try to hook a big one.

“I don’t know if it’ll be as busy as last year, but the word is getting out about these big fish,” he said.

This spring, Moncrief not only has had a solid run of catching large fish, but he and his clients are pulling them in in large numbers.

“I had two clients out (from) California. With three of us fishing we boated 62 kokanees,” he said, though he noted he personally releases almost all his catches now.

Catching big kokanee, by the way, is not just a trait of his — it runs in his family.

The second-biggest kokanee pulled in in the world was one he said his daughter, Shelby, caught at Wallowa Lake 10 years ago — a 27-inch, 9-1/2-pound whopper.

Chinook salmon numbers are not expected to be good this year, Kyle Bratcher, assistant district fish biologist for the Oregon Department of Fish and Wildlife, said in a recent update.

In the report, Bratcher wrote that Hells Canyon opened to spring fishing April 24, and that he looks for the fishing to improve around the middle of May.

Bratcher also reported that kokanee fishing on the Wallowa Lake is turning in fish that are averaging about 10 inches.