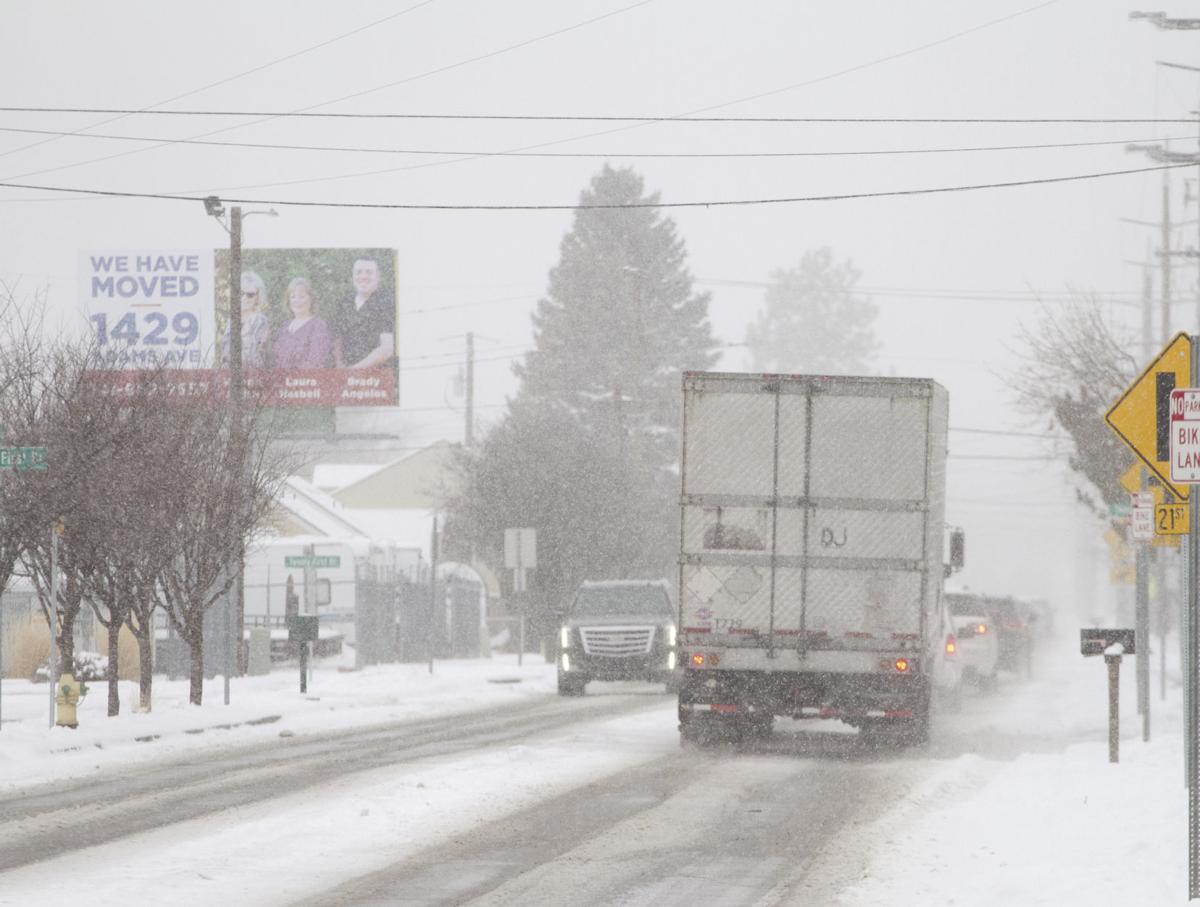 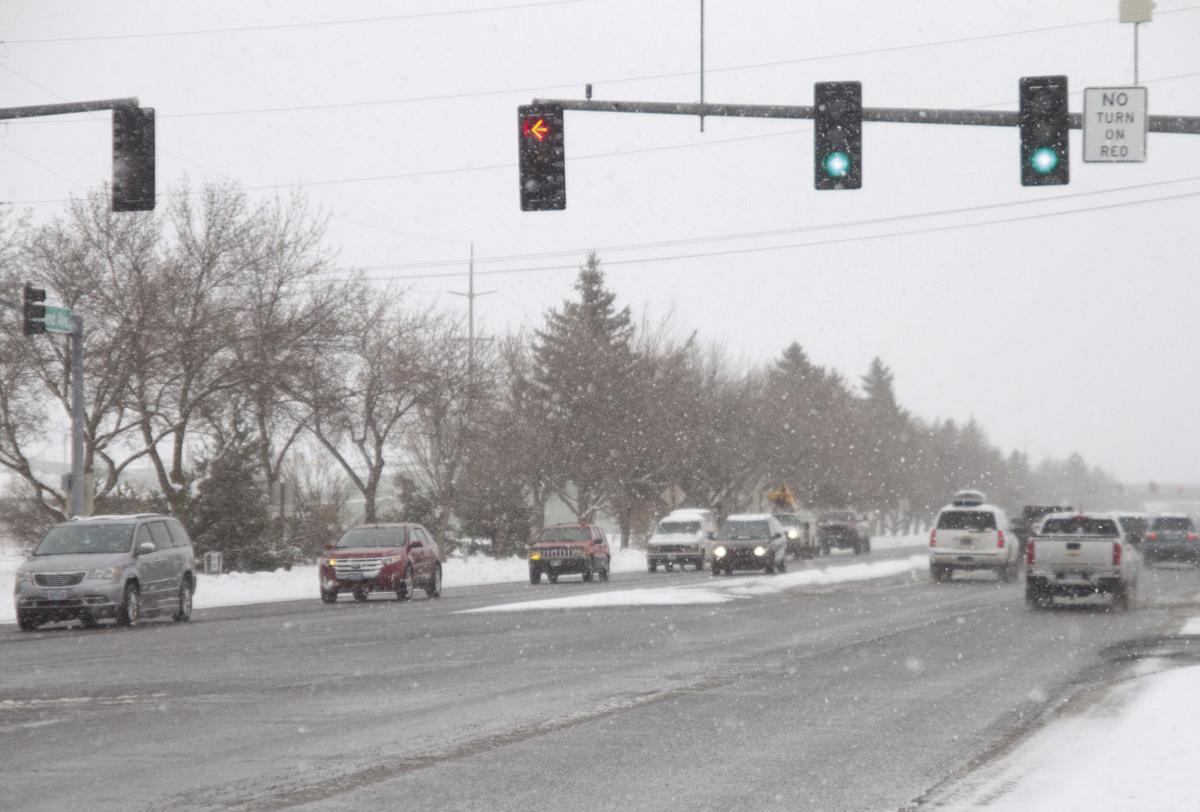 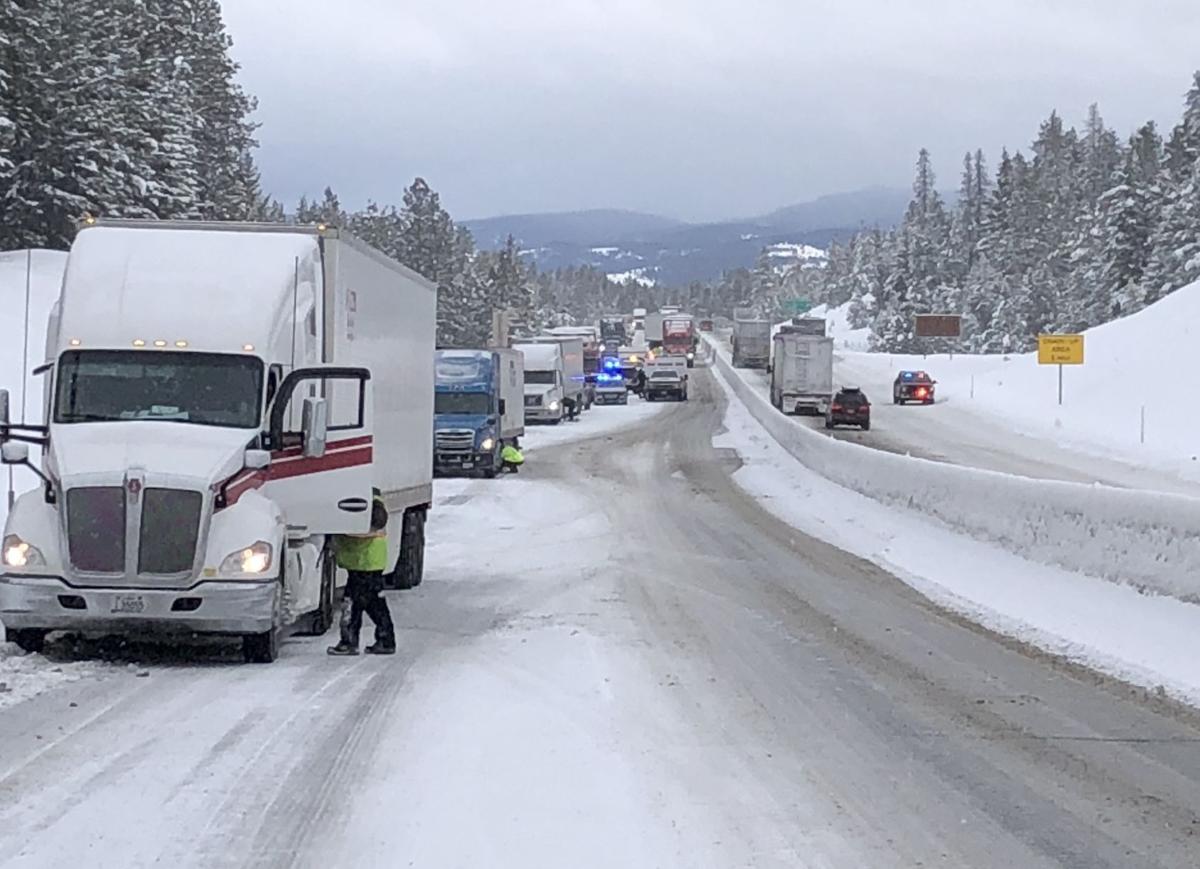 Semitrailers on Tuesday block the westbound lanes of Interstate 84 near milepost 247. The Oregon Department of Transportation shut down the lanes between Baker City and Pendleton due to semis spinning out and crashing on the icy road.

LA GRANDE — Winter has definitely arrived in Northeast Oregon. With several inches of snow blanketing most of the Grande Ronde Valley, there is plenty of packed powder to play in, along with an array of safety issues.

The increase in snow began Friday with some people reporting more than a foot of snowfall in parts of Union County, according to the National Weather Service in Pendleton. And the snow will continue during the rest of the week.

"We are anticipating a break in the snow Tuesday and Thursday this week, but we anticipate it will return," said Weather Service meteorologist Rob Brooks.

With snow building up, transportation around Union County became difficult. School districts across the InterMountain Education Service District delayed or closed schools due to weather. Michele Madril, spokesperson for the education service district, said the decision to delay or close is made by the individual districts and superintendents based on concern for student safety.

Safety, she said, is the No. 1 priority for the school districts. She said there are measures to prevent students from falling behind if school is closed. La Grande, Elgin, Imbler, Pendleton, Hermiston and other regional districts have opened school late or shut it at least one day in the past week.

Schools may slow down during winter weather, but it often means busy days and nights for law enforcement. According to law enforcement dispatch in La Grande, 12 collisions during the weekend required police presence. Union County Sheriff Boyd Rasmussen said when the roads are slick motorists often call law enforcement for help.

"Though I am not sure how many calls we received this weekend, during this time of year we regularly assist with people getting unstuck from the snow," he said.

The Oregon State Police command in Pendleton reported troopers responded to four crashes on Interstate 84 between Pendleton and La Grande due to ice and snow over the weekend Police reported no one suffered major injuries.

The Oregon Department of Transportation also reported an increase in wrecks likely due to the weather.

"Snow is a large contributor to crashes," transportation department spokesperson Tom Strandberg said. "We need people to pay extra attention and to make sure they are chaining up where they are supposed to and putting on traction tires."

A jackknifed semitrailer Saturday evening on I-84 near milepost 236 stopped the eastbound flow of traffic for hours between Pendleton and La Grande, and crashed and stalled semis Tuesday afternoon led to the shutdown of I-84's westbound lanes from Pendleton to Ontario until about 8 at night. Strandberg said while many of the closures due to crashes involve large freight vehicles, all drivers should be extra cautious during winter weather conditions.

"Usually with snow and ice, cars can still get through," he said. "But when visibility is an issue, it isn't safe (for anyone)."

With more snow on the way, Strandberg suggested drivers go to tripcheck.com for updated weather and road conditions before getting in the car. If you have to be on the road, authorities including ODOT and law enforcement also encourage travelers to be prepared by carrying traction devices, warm blankets, food and emergency kits.

While the winter storms can make travel difficult, the increase in the snowpack is good news. According to the National Weather Service Northwest River Forecast Center, the snowpack in the Blue Mountains was 90% of normal as of Tuesday afternoon. At the start of January it was at 50%. Snowpack typically acts as a natural reservoir, providing water throughout the drier summer months.

LA GRANDE —  Home delivery of the Wednesday edition of the Observer will not arrive until tonight or Thursday morning.