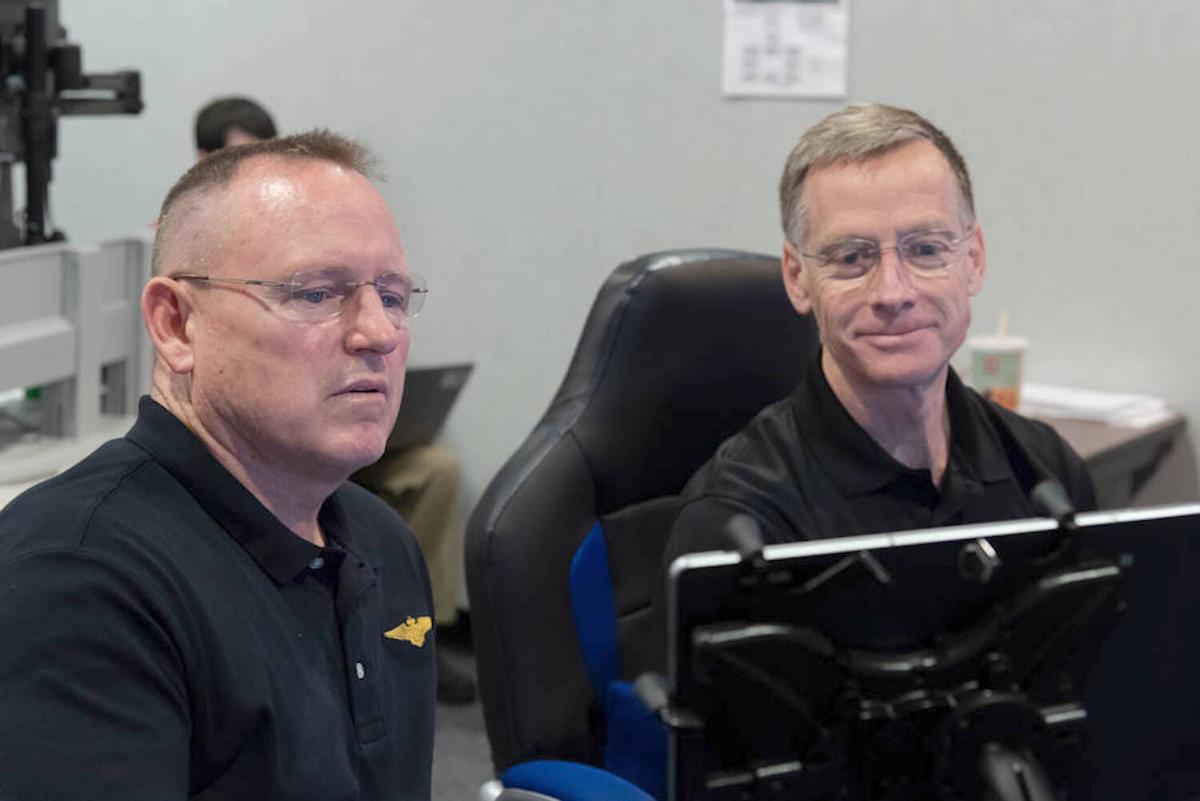 In this Nov. 29, 2018 photo, Commercial Crew Program & Boeing Crew Flight Test astronauts Butch Wilmore, left, and Chris Ferguson participate in a flight control simulation for a Boeing CST-100 Starliner capsule at the Johnson Space Center in Houston. On Wednesday, Oct. 7, 2020, Ferguson removed himself from the first Starliner crew, citing his daughter’s wedding in 2021. Wilmore is the replacement. 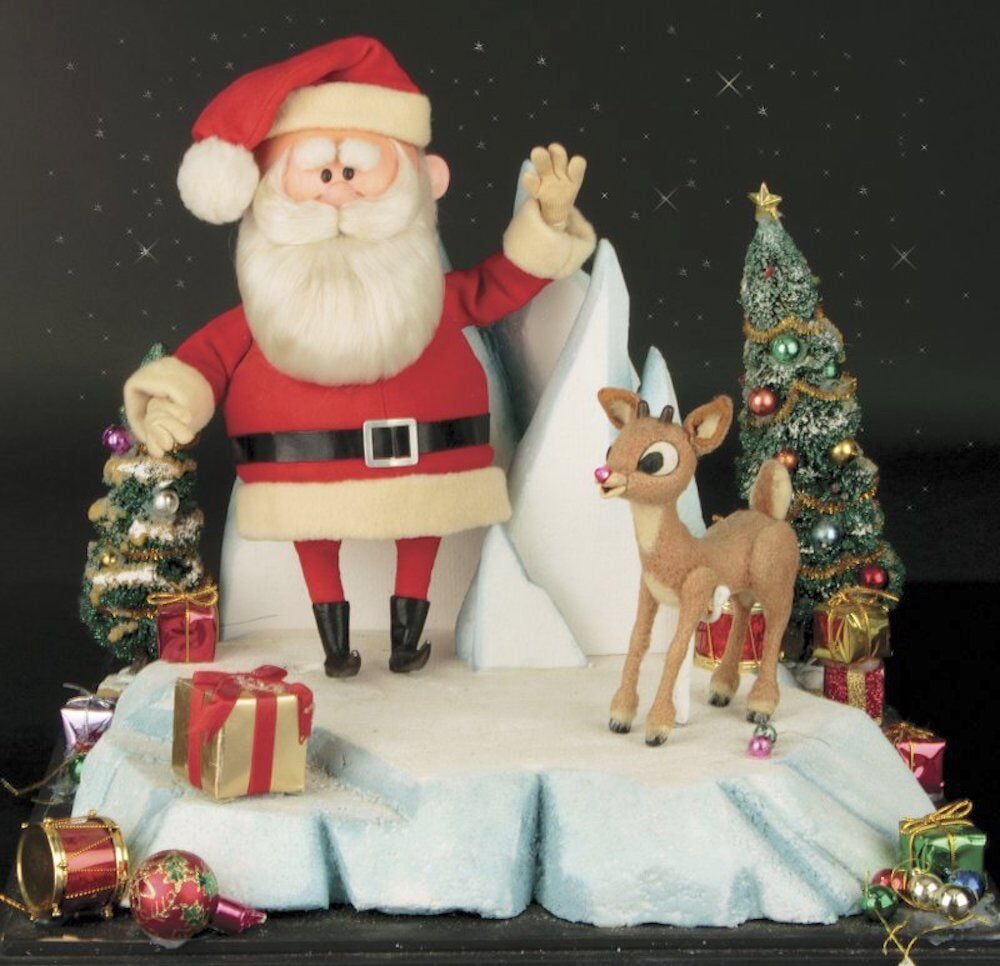 This image shows a Santa Clause and Rudolph reindeer puppet used in the filming of the 1964 Christmas special “Rudolph the Red-Nosed Reindeer.” Auction house Profiles in History announced Thursday, Oct. 15, 2020, a 6-inch-tall Rudolph and 11-inch-tall Santa used to animate the TV special will be sold together in the auction that starts Nov. 13 and are expected sell for $150,000 to $250,000.

CAPE CANAVERAL, Fla. — The commander of Boeing’s first astronaut flight has pulled himself off the crew so he’s on Earth — not at the International Space Station — for his daughter’s wedding next year.

It’s the second crew switch for Boeing’s Starliner capsule, grounded until the end of this year or early next because of software problems encountered during the first test flight last December.

In a video posted to his Twitter account, Ferguson said it was a difficult decision, but “next year is very important for my family.” He said he has several commitments “which I simply cannot risk missing.” A Boeing spokeswoman confirmed one is his daughter’s wedding.

“I’m not going anywhere. I’m just not going into space next year,” Ferguson said. He stressed that he remains committed to the Starliner program and will continue to work for Boeing.

The former NASA astronaut has flown in space three times, commanding the last shuttle flight in 2011. He has been replaced on the Starliner crew by NASA astronaut Butch Wilmore, who had been training as a backup for the test flight. Wilmore joins NASA astronauts Nicole Mann and Mike Fincke, who replaced Boe.

In December or early January, Boeing plans to repeat a Starliner test flight without a crew, in hopes of reaching the space station this time. If that goes well, Wilmore, Fincke and Mann will fly to the space station aboard a Starliner as early as June 2021, and remain in orbit anywhere between two weeks and six months.

SpaceX, meanwhile, plans to launch its second astronaut flight at the end of this month. Two NASA test pilots returned to Earth in August to close out SpaceX’s first crew mission. NASA has turned over the job of ferrying astronauts to and from the space station to private companies.

Rudolph and his nose-so-bright into auction will take flight

LOS ANGELES — Rudolph and his still-shiny nose are getting a new home, and it’s bound to be a lot nicer than the Island of Misfit Toys.

The soaring reindeer and Santa Claus figures who starred in in the perennially beloved stop-motion animation Christmas special “Rudolph the Red Nosed Reindeer” are going up for auction.

Auction house Profiles in History announced Thursday, Oct. 15, that a 6-inch-tall Rudolph and 11-inch-tall Santa used to animate the 1964 TV special are being sold together in the auction that starts Nov. 13 and are expected to fetch between $150,000 and $250,000.

Collector Peter Lutrario of Staten Island, New York, thought they might be the only items he would never sell, but when he recently turned 65 he thought about having something to leave for his children and grandchildren.

“I always said I would die with the dolls,” he told The Associated Press. “I’m just putting the family first.”

The figures were made by Japanese puppet maker Ichiro Komuro and used for the filming of the show at Tadaito Mochinaga’s MOM Productions in Tokyo.

They’re made of wood, wire, cloth and leather. Rudolph’s nose, after some minimal maintenance through the years, still lights up.

The realistic bristles of Santa’s beard are made from yak hair.

Lutrario, who bought them about 15 years ago after seeing them appraised on “Antiques Roadshow” on PBS, says that even after well over five decades you can manipulate them as the original animators did.

“They’re still malleable,” he said, “and it’s very detailed. Not only can you move the arms, the legs, the head, you can move the fingers, the thumbs.

The show, produced by the company that would become Rankin/Bass Animated Entertainment, first aired Dec. 6, 1964 on NBC in the United States. It’s been a TV staple ever since with its tale, based on the 1939 song, of a year when Christmas was almost canceled, the misfit reindeer who saved it, an elf with dreams of being a dentist, and an island full of cast-away toys.

The figures would make their way to the New York offices of Arthur Rankin Jr. and Jules Bass. Rankin later gave them to his secretary, who gave them to her nephew, who owned them until Lutrario bought them in 2005.

The figures, among several used to make the special, are the first encountered by the auctioneers at Profiles in History, which specializes in selling rare and coveted Hollywood memorabilia.

The company said in a statement that the “rarity of these puppets cannot be overstated.”

Why Pennsylvania court ruling is a win for Democrats