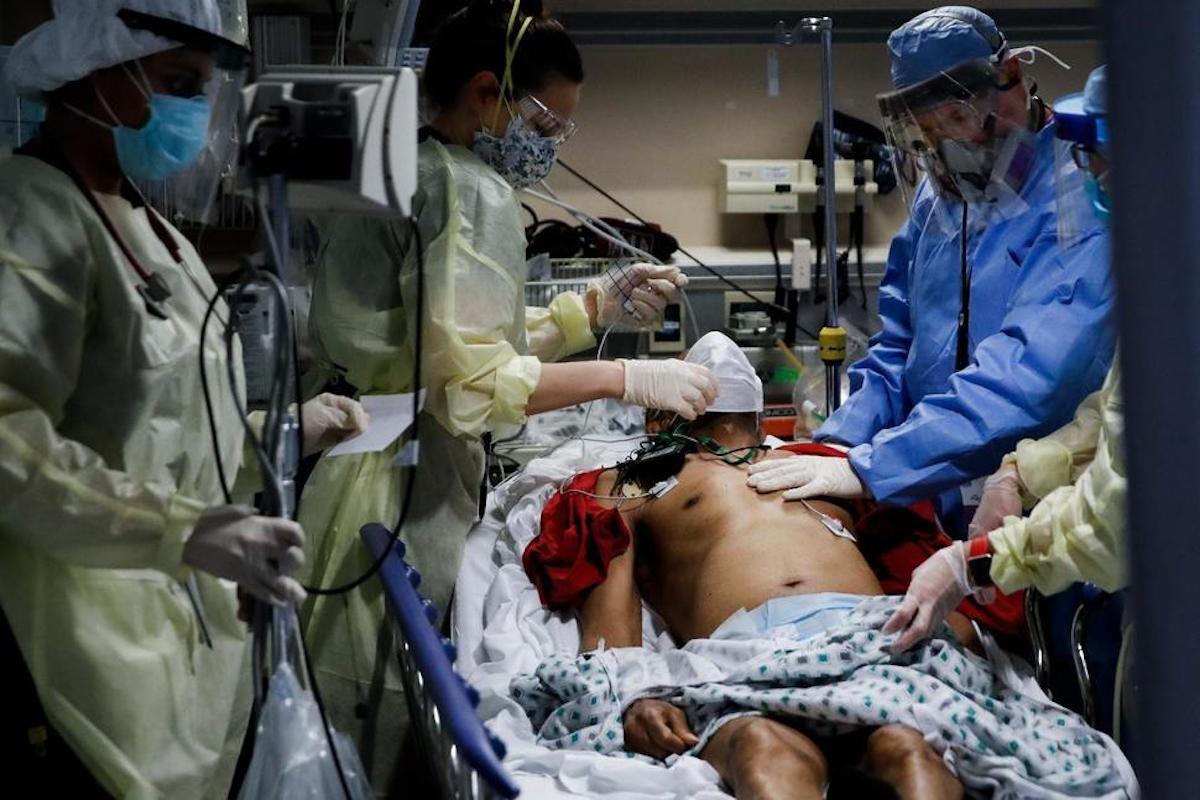 Medical workers treat a patient on April 20, 2020, whom emergency medical personnel delivered from a nursing home showing symptoms of COVID-19 at a hospital in Yonkers, New York. 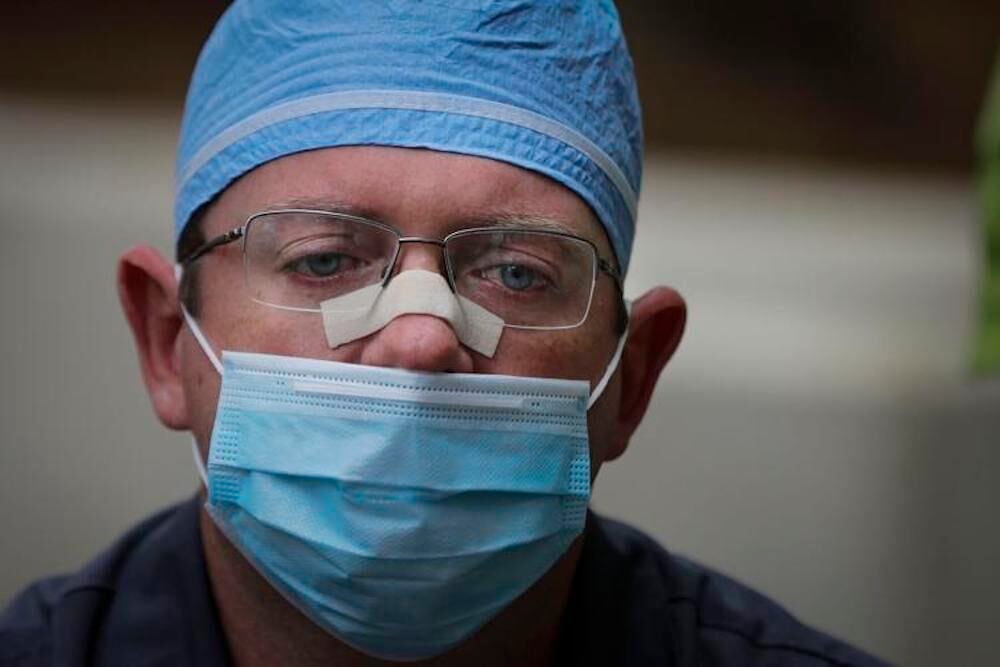 Chaplain Will Runyon holds back tears as he speaks of the hardships and death amid the COVID-19 coronavirus outbreak outside of Phoebe Putney Memorial Hospital in Albany, Georgia, on Monday, April 20, 2020. “There’s so much death right now, it piles up on you, it feels heavy,” Runyon said. 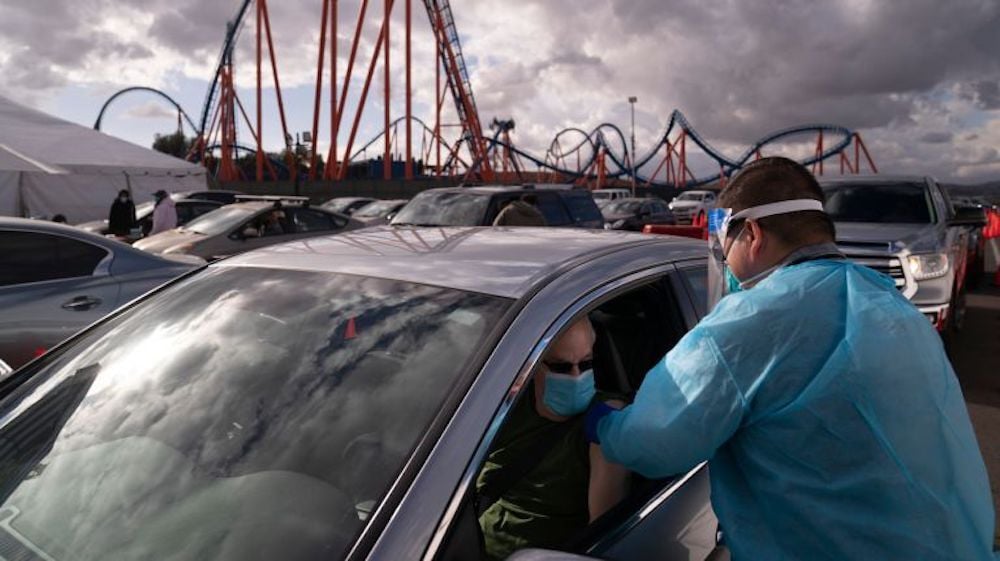 Nurse Joselito Florendo administers the COVID-19 vaccine to Michael Chesler on Jan. 22, 2021, at a mass vaccination site in the parking lot of Six Flags Magic Mountain in Valencia, California.

Just one year ago, America had no idea.

Life in February 2020 still felt normal. Concern was building about a mystery respiratory illness that had just been named COVID-19. There was panic buying, and a sense of trepidation. Yet it was tempered by a large dose of American optimism. The coronavirus still felt like a foreign problem, even as U.S. authorities recorded the country’s first known death from the virus.

Precisely a year later, America is hurtling toward a horrifying milestone of 500,000 deaths from COVID-19.

A relentless march of death and tragedy has warped time and memory. It became easy to forget the shocking images, so many day after day, of scenes once unthinkable in a country of such wealth and power. As the year unfolded, Associated Press photographers formed a pictorial record of suffering, emotion and resilience. It shows the year that changed America.

Looking back, we can see it happened in phases.

The crisis felt far away

Last February, Americans still greeted each other with handshakes and commuted to work in crowded public transportation. Children were still at school in actual classrooms. Hollywood icon Tom Hanks walked the red carpet at the Oscars, not knowing a month later he and his wife would contract COVID-19. Baseball spring training drew the usual crowds, without a face mask in sight.

But an ominous cruise ship with COVID-infected passengers circled off the coast of California. Within weeks, the Grand Princess — and the initial efforts by the state and the federal governments to bar it from coming ashore — became a symbol of America’s misguided belief that it could keep the disease out.

Words like shutdown and social distancing were not yet part of our vocabulary in those early days. Few of us wore masks as we stood in long lines to stockpile groceries and cleared the shelves of toilet paper.

Nightmarish scenes we had witnessed in China and Italy reached America, and the nation snapped to attention. Nursing homes near Seattle became the sites of the first deadly U.S. outbreak. We watched the elderly and frail suffer alone: An octogenarian with COVID-19, stretched out in a hospital bed, blowing her family a kiss through a window.

The World Health Organization declared the crisis a pandemic in March, and everything from college campuses to corporate headquarters cleared out. The NCAA announced that the rite of spring for so many Americans — its college basketball tournament — would be played before largely empty arenas, and then abruptly canceled it.

Dr. Anthony Fauci, the nation’s leading expert on infectious disease, became a household name in daily news conferences. When he estimated in March that 100,000 to 200,000 Americans could die from the virus, horror was tempered by total disbelief. President Donald Trump touted hydroxychloroquine as a “game changer” but medical experts disagreed.

American hustle and bustle came to a standstill as hotspots exploded across the country. The typically jam-packed Los Angeles freeways emptied into eerie stretches of open road. The lights stayed on in Times Square but its legendary energy and crowds vanished. April felt like Armageddon in New York City; ambulances constantly blared down deserted streets, body bags were forklifted into refrigerated trucks that parked outside hospitals where they served as makeshift morgues and stark symbols of death.

Aerial footage captured by AP showed another unthinkable sight: a mass grave in New York City for unclaimed bodies of COVID-19 victims. Workers in hazmat suits were seen lowering wooden coffins, stacked on top of each other, into deep trenches dug in a potter’s field off the coast of the Bronx.

We marveled at the heroism of health care workers and tried to show our gratitude; New Yorkers clapped and cheered and banged pots each night at 7 p.m. to honor those doctors and nurses. We mourned the nonstop trauma they absorbed on the frontlines.

Afraid and exhausted, they battled to save the sick and vowed not to let victims die alone. Inside hospital rooms, where countless patients had no family to comfort them, the grim task of offering solace fell to the overworked and emotionally drained doctors, nurses and hospital chaplains. Some held back tears as they offered non-stop comfort and prayers. “There’s so much death right now, it piles up on you, it feels heavy,” said a chaplain in Georgia.

The reality that America had become the global epicenter of modern history’s deadliest pandemic crashed into focus.

Life moved online: everything from work and school to doctors appointments, birthday parties, weddings — and funerals.

Catching COVID-19 became just one of many concerns as the pandemic shut society, forcing businesses to close and unemployment to skyrocket. Paychecks shrank or disappeared altogether for millions, and harrowing portraits of hunger emerged across the country as Americans lined up at food banks, many for the first time in their lives.

Science mixed with politics, deepening a national divide and adding to the stress of a nation overwhelmed. Protests against racial injustice sent people, most of them wearing masks, into the streets.

Amid the upside-downness of life, we sought normalcy. Restaurants in some places hung their “open” signs and refused to abide by stay-at-home orders, welcoming customers willing to dine inside. Others came up with creative al fresco options. In the parking lot of one California restaurant, a couple brought their own table and even fine china to enjoy Italian takeout.

Amid escalating loss, vaccines arrived in mid-December, kicking off the biggest vaccination effort in U.S. history. It felt like the first good news in a doomed year. As doctors and nurses got the first shots, some cheered. Others wept, the constant trauma and sorrow merging with hope in one indescribable moment.

As vaccine supply picked up, many amusement parks and stadiums, after months vacant, reopened as vaccination sites.

Holidays, so often a time of hope, brought more suffering. Empty chairs at family tables were a painful reminder of lost loved ones. Millions of Americans ignored official pleas to avoid travel and gatherings, making the holidays a catalyst for new infections. Surge upon surge of new cases followed Thanksgiving and then Christmas and New Year’s Eve, with each day seemingly setting new records for infections.

As the country and the world bid goodbye, and good riddance, to 2020 it became clear that 2021, at least the early months, would look pretty similar.

Politics shifted with President Joe Biden taking over. After four years of chaos and controversy, the new president brought a sense of calm to national politics. Still, vaccine delays persist, and it’s not clear if America is winning its war against the virus.

The COVID-19 death toll is not stopping at 500,000, and the virus has mutated countless times, with some variants easier to spread and harder to protect against.

A fiery Lady Day in 'U.S. vs. Billie Holiday'

Biden announces 3 nominees to USPS board

US carries out airstrikes on Iran-backed militia groups